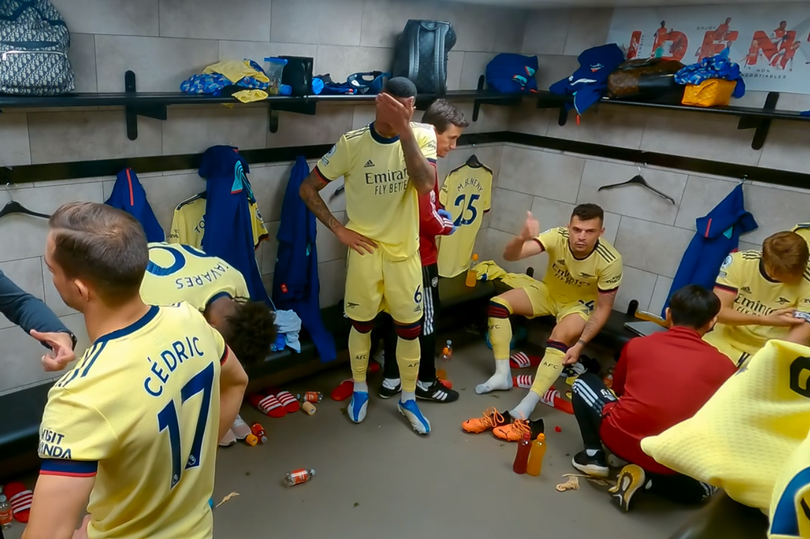 Granit Xhaka turned the air blue and told his Arsenal team-mates they had to play like Newcastle United after his side performed like a ‘second division team’ against the Magpies last season.

Newcastle produced their best display of the campaign to defeat Arsenal 2-0 at St James’ Park back in May and it was Eddie Howe’s side who looked like they were playing for a place in the top four – not the visitors. Relentless Newcastle had more possession, shots and corners and, crucially, the black-and-whites made that dominance count in the second half.

Ben White put the ball through his own net under pressure from Callum Wilson in the 55th minute before Bruno Guimaraes sealed all three points late on as Newcastle recorded their first win against a traditional big hitter under Howe. The result dealt a huge blow to Arsenal’s hopes of qualifying for the Champions League and bitter rivals Spurs were in the driving seat going into the final day, knowing a win against relegated Norwich City would secure their place at Europe’s top table.

Yet it is easy to forget that, somehow, it was goalless at St James’ at half-time and the final episode of Amazon’s All or Nothing documentary series on Arsenal has revealed just what was said in the away dressing room as Xhaka attempted to rally his team-mates.

“Guys we are dreaming of the f—– Champions League,” he said. “We are playing like a second division team, man. Everyone! Wake up now for 45 minutes guys. We have to play how they are playing. F— me! Wake up guys! Wake up!”

Mikel Arteta had told his players before the game that he wanted to see them take the initiative and show that they wanted it more than Newcastle. However, Arsenal were fortunate to be level going in at the break after struggling to cope with Newcastle’s energy and intensity after the hosts fed off a remarkable atmosphere under the lights.

Arteta would later admit that Newcastle played ‘10,000 times better’ than Arsenal, but the Gunners’ fate was far from sealed when the Spaniard addressed his players before they went out for the second half. It reminds you just how impressive Newcastle’s performance was after the break, too.

“At the minute, it’s all them. In all the departments, it’s all them and we have to flick the switch. The best way to do it, guys, is having the ball.

What Your Sneezes Mean: Their Symbolism Based On The Time

What Are the Best Car Deals of September?

Old Belvedere head coach Jonathan Garth believes Deirbhile Nic a Bháird’s strong start to the Energia All-Ireland League Women’s Division is pushing her claims for an Ireland return. Nic a Bhaird, who turned 27 on Thursday, has been central to Belvedere’s two wins so far. She has impressed in the ...

Trump will have to swallow his pride in NY court — and he may not be able to stomach it: analysis


View more: Trump will have to swallow his pride in NY court — and he may not be able to stomach it: analysis

Netflix’s Monster: The Jeffrey Dahmer Story is the latest documentary to follow the notorious cannibal and serial killer, who murdered 17 men and boys between 1978 and 1991 Netflix’s latest addition in the form of a true crime drama series delving into the life and crimes of Jeffrey Dahmer ...

LAP Marketplace made in Latinoamérica

Lucid Air EV: How Much Range Can Buyers Expect?

When politics is just preening for the cameras

Review: Volvo XC40 Recharge – Safety and power fires this up to make it a smooth operator

‘How dare you not protect our future': Cost of living becomes a fresh rallying point in a new era of protest

Man (20s) dies after being struck by car near Naas