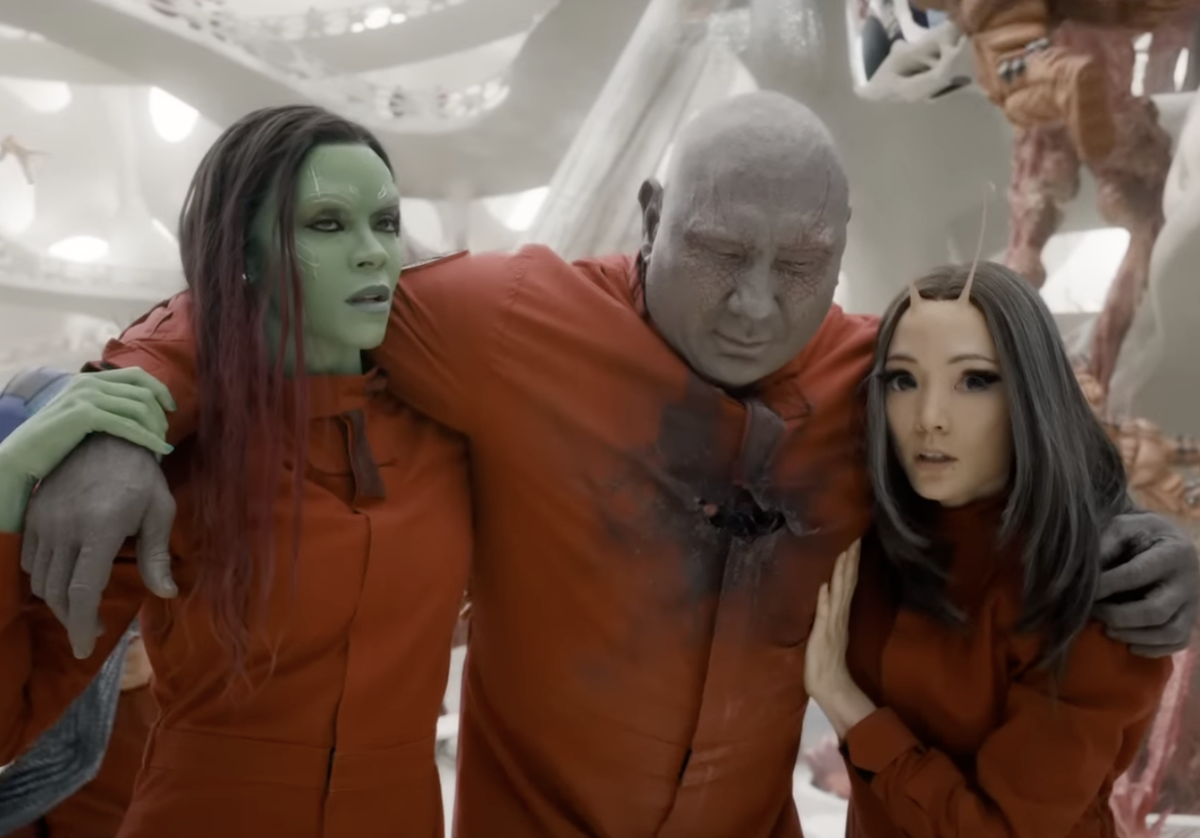 Guardians of the Galaxy Vol. 3’s official trailer is out and fans are “emotional”.

The official synopsis of the film says: “Peter Quill (Pratt), still reeling from the loss of Gamora (Zoe Saldaña), must rally the Guardians of the Galaxy on a mission to defend the universe and protect one of their own.”

The last Guardians of the Galaxy standalone film was released five years ago.

Previously, director James Gun said that Guardians of the Galaxy Vol. 3 will be the “end” for him and the rest of the team.

Speaking on Deadline’s Hero Nation podcast, he said: “This is the end for us, the last time people will see this team of Guardians.

“It’s so, so big and dark, and different from what people might be expecting it to be.

“I just want to be true to the characters, the story and give people the wrap-up that they deserve for the story.”

It’s time to face the music.

Watch the brand-new trailer for Marvel Studios’ Guardians of the Galaxy Volume 3 that just debuted at Brazil Comic Con #CCXP2022. Only in theaters May 5, 2023. #GotGVol3 pic.twitter.com/eweS6lwsGp

Ever since the trailer came out, fans have been “emotional” about the fact that this might be the last time they see these heroes together.

“It’s gonna be really hard to say goodbye to these characters that I’ve really grown to love over the years,” one fan wrote. “The first two entries are still my favorite movies in the franchise and one of the few very few that don’t feel like they were made on an automated conveyor belt.”

Another person added: “Man the first two Guardians of the Galaxy movies are amazing. I’m hyped and nervous, cause I heard this is the last Guardians movie. Overall, I’m so hyped.”

One person wrote: “I’m going to crying all through this I just know it.”

24 star Annie Wersching dies at the age of 45

Video: Keke Palmer cradles bump in brown maxi dress at her Once Upon A Baby-themed shower... then shows off moves with guests on dance floor as it transforms into 'lit party'

Video: Dancing On Ice's Michelle Heaton is the latest star to be voted off as fans blame 'cruel twist' after skate-off was AXED 'for one week only'

Video: Dancing On Ice: 'It's not a bad thing to be sexy!' Oti Mabuse DEFENDS Ekin-Su Culculoglu's racy routine as star dresses as a nun for Musicals Week - and fans are all saying the same thing

Video: 'I've had 72 hours from hell!' Katie Piper admits she was left in floods of tears after her eye's blood vessels burst and luggage was 'stolen' during flight to the U.S. to film new show

'He's giving me mad ick!' Love Island's Zara fumes and bursts into tears after Tom says Olivia has the best face in the villa during truth and dare game

Why police cars were stationed outside Stoke-on-Trent off-licence

The abandoned Edinburgh tunnel that runs beneath the New Town

Former Dancing on Ice winner Jake Quickenden has revealed what he thinks about the new shake up of removing the iconic skate offs in the competition, which was reported earlier this week. A few days ago, it was revealed that ITV would scrap the skate offs in ITV hit show ...

'Why are we not surprised?': Love Island fans fume as Ron has his head turned from partner Lana AGAIN - dubbing new bombshell Samie '100% my type'

Love Island fans were left infuriated on Sunday evening as Ron Hall appeared to once again have his head turned, this time by new bombshell Samie Elishi. Despite declaring earlier in the day that his sights were set on current love interest Lana Jenkins, the arrival of Estate Agent Samie ...


View more: 'Why are we not surprised?': Love Island fans fume as Ron has his head turned from partner Lana AGAIN - dubbing new bombshell Samie '100% my type'

As the old saying goes, ‘Anything you can do, I can do better.’ And that seems to be Olivia Frazer’s philosophy when it comes to her feud with rival Married At First Sight bride Domenica Calarco. Not only has the 29-year-old former teaching assistant followed Domenica into the OnlyFans game – ...

Video: Annie Wersching dies aged 45: Actress best known for her roles in 24, Bosch, Timeless and hit video game The Last of Us passes away after two-year battle with cancer


View more: Video: Annie Wersching dies aged 45: Actress best known for her roles in 24, Bosch, Timeless and hit video game The Last of Us passes away after two-year battle with cancer

Jessica Rowe and Peter Overton’s teenage daughter Allegra is following in her famous parents’ footsteps by signing with a top modelling agency. Allegra has inked a management deal with Priscilla’s Models just weeks after her 16th birthday, and has already posed for her first headshots. Former Studio 10 host Jessica, 52, ...

Totally useless and grotesquely incompetent, Rishi Sunak couldn’t run a bath let alone Britain. The pint-sized unelected Prime Minister is proving he’s not up to the big job before his 100th day in the post on Thursday. Even Tories are beginning to acknowledge that woeful dithering, shocking errors and appalling ...


View more: 'Rishi Sunak is clearly out of his depth and couldn’t run a bath let alone Britain'

Jonjo Shelvey, Dan Burn, Joelinton and Chris Wood during Tottenham v Newcastle, April 2022 Nottingham Forest are close to completing a second signing from Newcastle United of the January transfer window, according to reports. Earlier this month, Forest took Chris Wood from Newcastle on loan with a potential obligation ...

A Tory MP has compared the Government to the “band on the Titanic”, according to leaked WhatsApp messages, as infighting erupts over Rishi Sunak’s plans to clamp down on illegal immigration. The messages, reported by Sky News and apparently leaked from the so-called Common Sense Group of Tory MPs on ...

PICTURED: Pregnant woman, 23, killed in Staten Island crash as 'drunk' boyfriend driving over 100mph is charged with manslaughter: Dodge Challenger hit utility pole and split in THREE parts as she was ejected from car

EV revolution threatened by charger crisis: Drivers will not switch to electric cars if Britain's charging network is not bolstered, campaigners warn

RUTH SUNDERLAND reveals home truth for investors: Trying to make a profit from services for the vulnerable sounds like a recipe for disaster

ULEZ: How to avoid paying £12.50 charge if you have an old car like the ones used in Harry Potter, James Bond, and Mr Bean films

Unions are peddling 'nonsense' figures to back up their claims for pay rises, MPs say

Are booze-free tipples really as healthy as you think?

'Thanks for trying to save my girl': Mother of stabbed 15-year-old praises the teenager's new boyfriend, 16, for attempting to protect 'my baby' from attacker

Video: Fears residents are still inside a burning apartment where one is already dead and 10 are being treated for smoke inhalation

Dartmoor mystery as man in suit found dead with 'condom, seeds and jar of sauce'

Using influence for good! YouTuber Mr Beast, 24, pays to cure the sight of 1,000 blind people: Philanthropist gifts patients with Tesla and $50k college tuition after healing their vision - and makes $100k donation to optical surgeries across the world

Annie Wersching dies aged 45: Actress best known for her roles in 24, Bosch, Timeless and hit video game The Last of Us passes away after three-year battle with cancer

Video: Watch as thugs in 'stolen BMW' crush woman's legs with bumper after she stood in the road to stop their escape

Join together to protect the landscape

'I've had 72 hours from hell!' Katie Piper admits she was left in floods of tears after her eye's blood vessels burst and luggage was 'stolen' during flight to the U.S. to film new show

Primark accused of going a 'step too far' with new hoody

Fly Eagles Fly! Jill Biden returns to Philadelphia to watch her hometown team face off against the San Francisco 49ers in the NFC Championship Game

Speaker Kevin McCarthy says he’s meeting with Biden on WEDNESDAY and will bring up the debt ceiling: Republican leader pledges US won’t default but blames DEMOCRATS for the financial stand-off

Anthony Gordon says he has taken a 'massive step' after completing £45m move to Newcastle, with the 21-year-old insisting he 'didn’t mean to disrespect' Everton despite missing training to force move to Tyneside