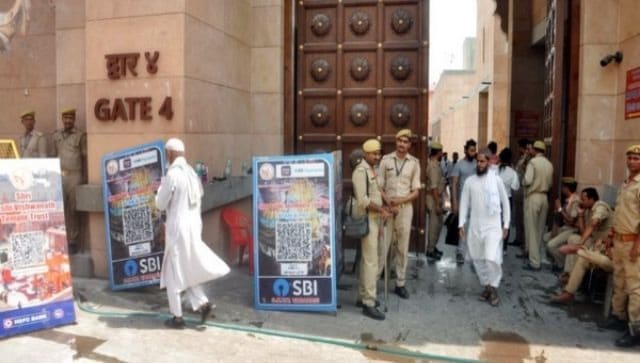 Varanasi: The husband of one of the five women who are being heard in the Gyanvapi mosque-Shringar Gauri case has allegedly got threat calls from a Pakistan phone number asking him to withdraw the petition.

Five women had moved a court here seeking permission to offer regular prayers to the Shringar Gauri deity, whose image is located at the rear of the mosque located next to the Vishwanath Temple.

Sohan Lal Arya said Thursday that they got the threat calls on 19 and 20 July. Arya represents his wife Laxmi Devi and three other Varanasi-based women. The fifth petitioner is from Delhi.

A case has been registered on the basis of his complaint at Laksa police station, police said. Arya said he received a similar threat call on 19 March as well, and had informed officials about it.

He said he told the caller that he wasn’t scared by any threat.

The matter will be investigated and necessary action taken, the official said.

Earlier, the local court had ordered a video survey of the Gyanvapi Masjid and a structure found in the complex triggered a row.

The lawyers for the Hindu petitioners claimed it was a shivling’. But the mosque management committee lawyers insisted that it was part of a fountain at the wazookhana, where devotees perform their ablutions.

Tristan Thompson models Andre 3000 shirt as he is seen in ex Khloe Kardashian's neighborhood... after she said she forgave him for cheating

Young Sheldon Fans Are Loving His Invention Of This Trendy Technology

The iconic Easter Island statues have been damaged in a fire, authorities say

Prince George will take lessons on how to be a King: royal author

WARE, England — Daniel Jones practiced fully Friday and will start at quarterback Sunday in London against the Green Bay Packers “I’m feeling good,” Jones said. Tyrod Taylor (concussion) has been ruled out. He jogged and threw some passes with trainers on the field during the individual period before riding ...

Foxconn, a Taiwanese electronics firm that is one of the main manufacturers of Apple iPhones, is planning to enter the automotive space with the Foxtron Model B. A full reveal of the Model B is coming on October 18, but Foxconn has already given a good look at the ...

Jan. 6 detainees say a D.C. jail is so awful that they'd like a transfer to Guantanamo


View more: Jan. 6 detainees say a D.C. jail is so awful that they'd like a transfer to Guantanamo


View more: North-South divide in opioid and painkiller prescribing with high use in England's most deprived areas

Nicholas Hoult, Venice Film Festival 2022 Getty Images EXCLUSIVE: Nicholas Hoult is in negotiations to join the ensemble of Robet Eggers next pic, Nosferatu, which Focus Features is producing. Bill Skarsgard is attached to play the titular character with Lily-Rose Depp also in talks to star. Eggers is directing ...

Marvel Studios/Disney+ Contains spoilers for “Werewolf by Night” The Marvel Cinematic Universe has flirted with the horror genre before. From the extremely Sam Raimi visuals of “Doctor Strange in the Multiverse of Madness” to the existential terror of “WandaVision” and Christian Bale’s creepy Gorr the God Butcher in “Thor: ...


View more: Werewolf By Night Gives Us The Most Hardcore Marvel Studios Intro Sequence Yet

Zuckerberg’s Metaverse App on 'Quality Lockdown' as Even Employees Won’t Use It: Report

Meta leadership has placed the company’s metaverse VR platform, Horizon Worlds, on a “quality lockdown” through the end of the year due to persistent bugs.


View more: Zuckerberg’s Metaverse App on 'Quality Lockdown' as Even Employees Won’t Use It: Report

300,000 COVID deaths among seniors avoided because of vaccines, report finds

Mexican drug lord claims attack was aimed at him

5 Best Robot Vacuums for the Easiest Cleaning Ever