The heartbroken mother of a teenage cancer patient has shown the extent of Victoria’s hospital crisis through a series of alarming photos.

Milligan said her friend told her the boy had been offered no food by the hospital during the lengthy waiting period.

“My friend says the nurse and doctor have been ‘beautiful’ but they have nowhere to put her boy,” she said.

“It’s been an incredibly stressful and painful time since his diagnosis but this she just can’t believe.”

Milligan added that her friend wanted their story public to “expose exactly what patients and staff are enduring”. 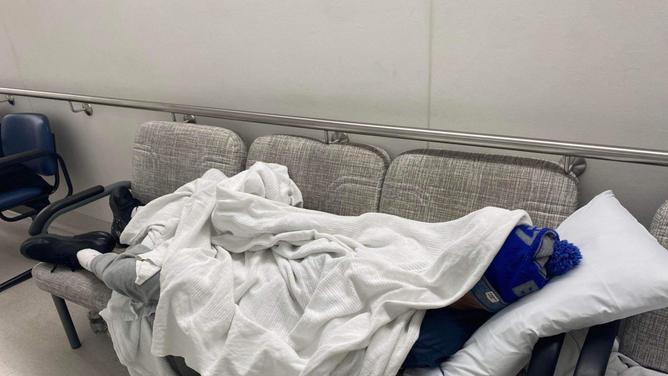 The 17-year-old has been undergoing cancer treatment. Credit: Supplied

Other patients’ stories shared on Thursday showed the extent of Victoria’s worsening healthcare crisis as services continue to buckle.

One woman, who didn’t want to use her real name, said her 83-year-old mother was left waiting for 17 hours after arriving at the hospital via ambulance.

The daughter credited staff with “doing their best” but said it didn’t negate the lack of facilities available at the hospital.

“It is heated and the staff are doing their best. It’s makeshift,” she said.

“I had to advocate for her to be scanned.”

Premier Daniel Andrews responded to the reports on Thursday morning, telling reporters “this winter has been a winter like no other” for the healthcare system.

“Winters are never easy in our health system, but when you’ve got Covid as well as things like RSV and flu (it becomes difficult to manage),” he said.

“(Staff) are not immune from getting sick themselves. If you’ve got, on any given day, thousands of staff that can’t come to work and you’ve got very high demand for care, those two things mean you’ve got real stress and pressure in the system.

“Every single clinician, every single member of the team is working as hard as they can and they do that work knowing the have the full support of our government.”

The state’s hospitals have been under increasing pressure since Covid cases began rising towards the end of 2021.

Health services have also had to deal with resurgent flu numbers along with furloughed and sick workers.

Tow truck driver shot in the head in the Bronx, cops say

‘I’m a Chef, and Here’s Why You Should Be Cooking With Tea’

If You're Trying to Eat More Low-Carb Foods, Try These 30 Dietitian-Approved Picks

7 Tips to Improve Your Sleep Quality

Pre-Order And Release Details For DRAGON QUEST TREASURES Are Here!

List of Samsung Galaxy Phones Likely to Get Android 13 By 2022 End: From Galaxy A53 to Galaxy S22 and More

Toss a Coin to the Third Season of Netflix's The Witcher

Bose QuietComfort Earbuds 2 vs. Sony WF-1000XM4: Which are the better noise-cancelling earbuds?

North Korea flexed its military muscle Sunday, launching a ballistic missile into the Sea of Japan ahead of planned US and South Korean drills and a visit to the region by Vice President Kamala Harris. The missile was launched from the western town of Taechon and flew 370 miles ...

A top-ranking Northern Territory police officer is set to testify at the Kumanjayi Walker inquest, having previously spoken of plans for the Indigenous teenager to surrender before he was fatally shot. Assistant police commissioner Travis Wurst told Constable Zachary Rolfe's trial in February he sent an immediate response team ...

Caddick evidence due from ASIC and husband

The inquest into the disappearance and suspected death of fraudster Melissa Caddick is due to resume with evidence from an investigator who helped uncover her million-dollar fraud. Isabella Allen from the Australian Securities and Investments Commission led the formal investigation from September 8, 2020 into Ms Caddick's Ponzi scheme ...


View more: Caddick evidence due from ASIC and husband

Some companies like Google, Microsoft, Apple, and Meta have a big advantage over others. When they can’t create something, or at least, don’t want to come from zero, they can just buy a well-established company. Google is about to enter the wearable segment with the Pixel Watch. However, the company ...

Democrats plan to “dump” President Biden and call on Hillary Clinton to run for a third time in 2024 out of fear that a more radical left-wing candidate could end up on the ticket, veteran political consultant Dick Morris said in a new interview. The longtime Bill Clinton adviser ...

Voters split on which party they want to take Congress in midterms: poll

​With control of Congress hanging in the balance, Republicans and Democrats are neck-and-neck in the weeks before November’s midterm elections,​ according to a poll released on Sunday. Registered voters are giving the GOP the advantage on inflation, the economy and crime, while Democratic candidates are getting an edge on ...


View more: Voters split on which party they want to take Congress in midterms: poll

It's coming "when it's ready"

No Apple Event in October? New iPads, Macs May See a Soft Launch

Black Panther: Wakanda Forever Looks to Answer How We Move On Despite 'Insurmountable Odds'

How Thinking Differently Improved My Retirement

Get Behind The Music Of METAL: HELLSINGER In This Mini-Documentary Video

Buy buy home: The Perth houses for sale worth checking out in Swanbourne, Mount Lawley and Palmyra

17 Comfort Foods with a Healthy Twist

Reducing Stress – How Does Nature Nurture the Brain?

Why Do We Laugh? New Study Considers Possible Evolutionary Reasons Behind This Very Human Behaviour

5 Everlane cashmere sweaters you need to try this fall

5 Secrets for Healing Your Body With Food, According to a Doctor

Wo Long: Fallen Dynasty Producer Says its “Good” to Have One Set Difficulty

King Charles and Queen Consort Camilla attend church at Crathie Kirk after returning to Balmoral, where Queen Elizabeth II passed away, to privately mourn her

YouTube has a new look inspired by the Material You design

'Finally together again': Royal fans say farewell to Her late Majesty Queen Elizabeth II after a photo of her headstone is released and say she has been reunited with Prince Philip

Is Fruit Juice Good for You?

How much protein should I eat to lose weight?

Life after monkeypox: Men describe an uncertain road to recovery

Shay Mitchell channels The Matrix as she flashes a glimpse of her abs in an edgy all-black outfit during Milan Fashion Week... four months after welcoming her second child

Holly Willoughby and Phillip Schofield 'ushered wheelchair user out the way to skip queue to see the Queen': Disabled woman's family say she waited for 13 HOURS before being moved aside to make way for presenters who were 'left off official guest list'

No Man Sky's 4.0 Update Will Be "Fully Focused" On The Nintendo Switch Launch

Listen: Hayden Paddon opens up about his rallying journey, Part 3