How to avoid drowning: learn basic water safety skills to protect yourself and others – and ‘when in doubt, get out’ 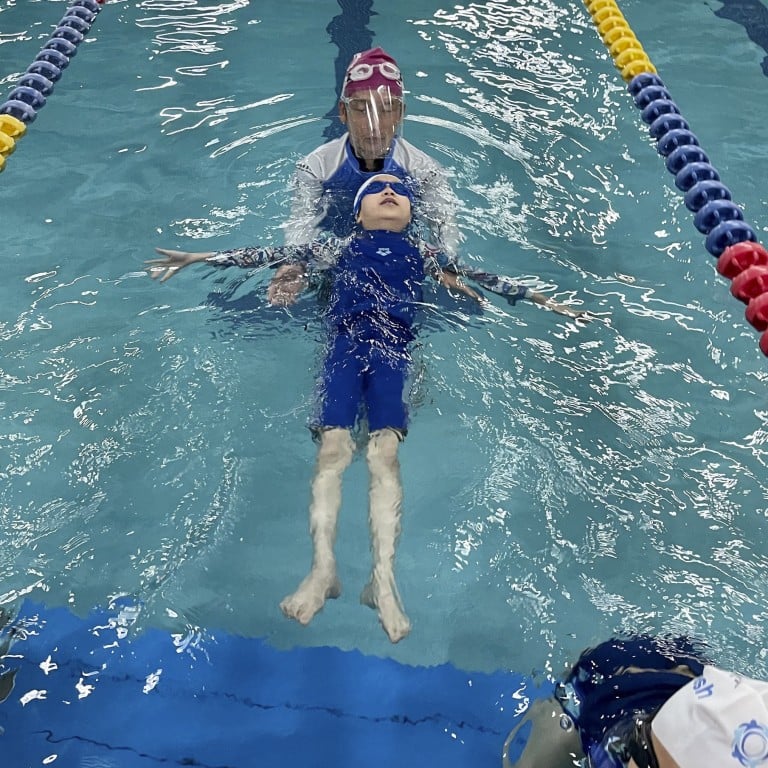 When Johnnie Chi-kau Chan was 14 years old, he was swimming at a pool in Hong Kong when he started to panic. “Help, help, help!,” he shouted, before the lifeguards came to his rescue.

It wasn’t that Chan didn’t know how to swim – in fact, he was in a competition. “I was the last one,” he says. “My peers were all in front of me, so I panicked at the time.” He had overestimated his physical ability, and was taken aback by the quick change in water depth at the pool in Tuen Mun, in the New Territories.

Every year, especially during the swimming season, there are a number of drowning cases at beaches and pools in Hong Kong. In one incident in May this year, two girls aged under 10 were found unconscious in a clubhouse pool. They were rushed to hospital, but one of the children died. “Don’t go alone – always have the buddy system [and] go with someone else,” she says. Always be mindful of pool depth, your surroundings – especially if you’re a parent with kids on the beach – and swim where there is a lifeguard on duty.”

Don’t swim if you feel unwell, and eat some food before swimming to prevent low blood sugar, dizziness or fainting. 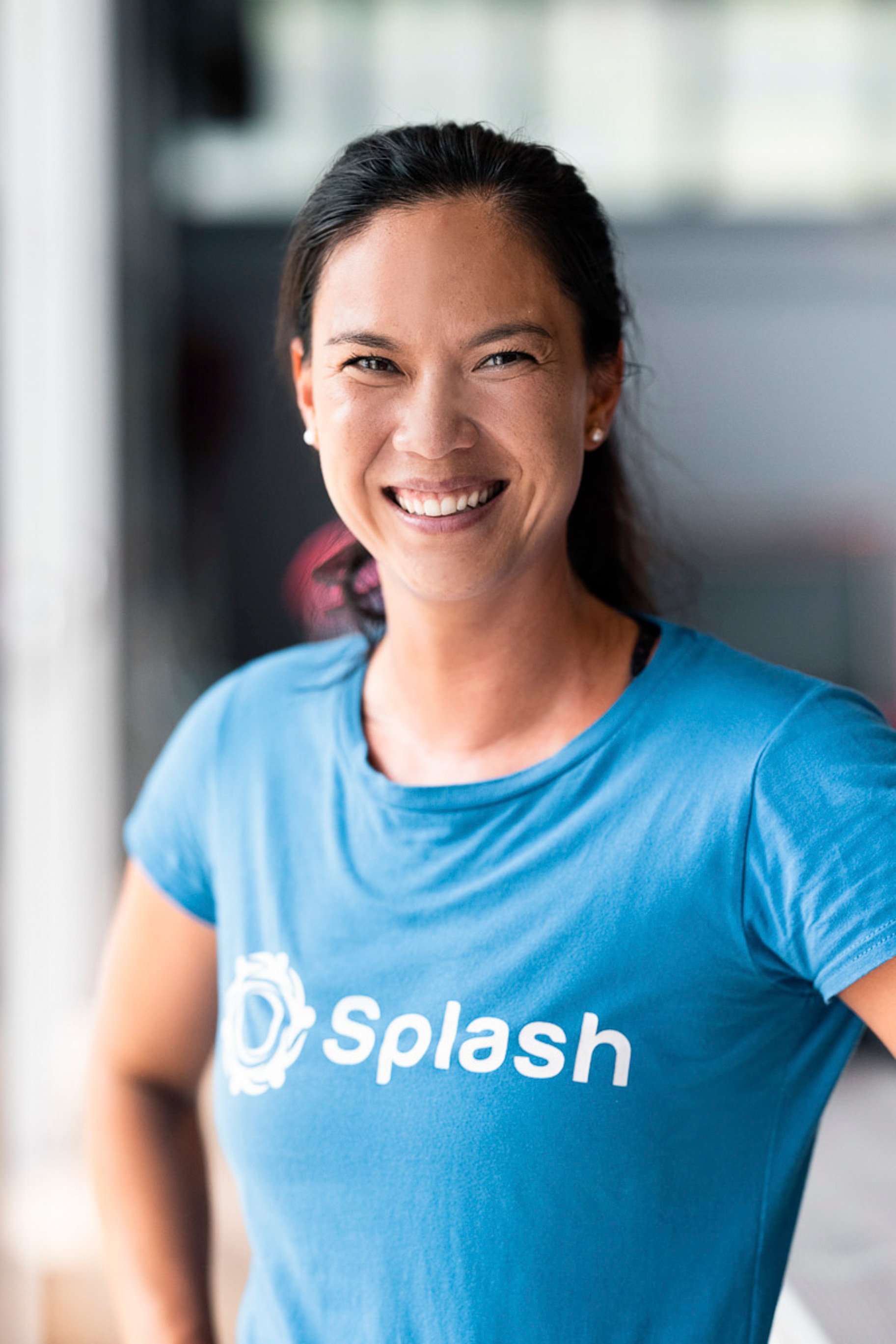 Splash mainly offers 10- to 12-week swimming courses for beginners that teach basic water safety skills, such as knowing how to release breath, handle buoyancy and move in the water.

“It’s just about water comfort, knowing how your body reacts underwater, knowing what to do, how that pressure is underwater,” Nguyen says.

Splash instructors teach the back float (a key survival position) and the backstroke. The first thing to do when you feel like you’re in trouble – in shallow or deep water – is to stay calm so you can remember how to get into these basic positions, Nguyen says. 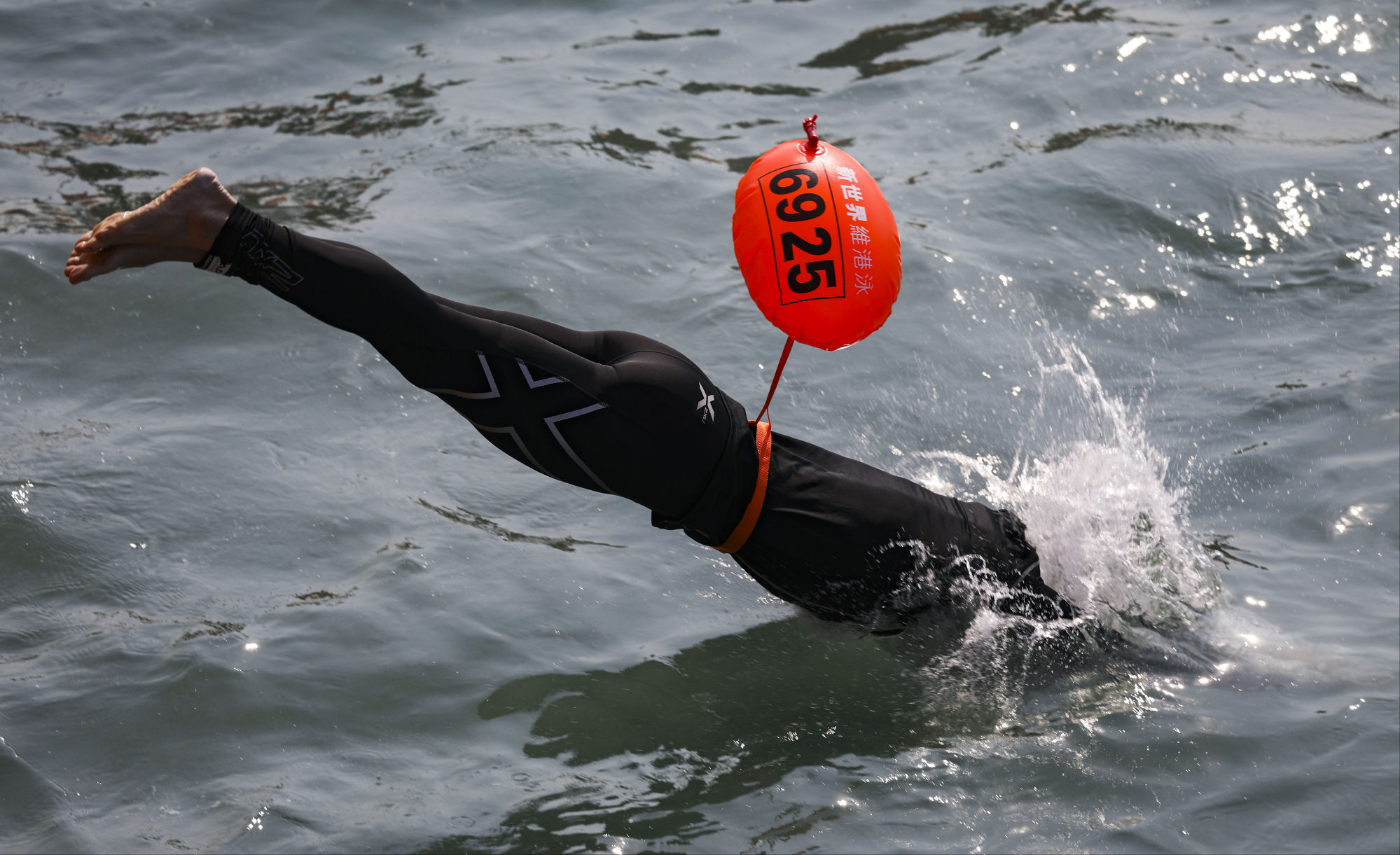 A swimming buoy provides an extra layer of safety when swimming in the sea. Photo: Sam Tsang

“[One of our students] lived on a boat, so she had to take a sampan back and forth. And she fell off the sampan,” Nguyen says. “She panicked at first, then she remembered the skills that she had learned, to make sure she could surface above the water, take a breath, float on her back, and then get to a [safe] position.”

For those engaging in water sports in the sea, it’s especially important to bring a safety flotation device, like a life jacket.

“A lot of accidents, especially the fatal accidents, resulted from personal negligence,” says Stephen Ho, vice-chairman of the Hong Kong Canoe Union. “For example, bringing the life jacket or personal floating device, but [not] putting it on properly.” 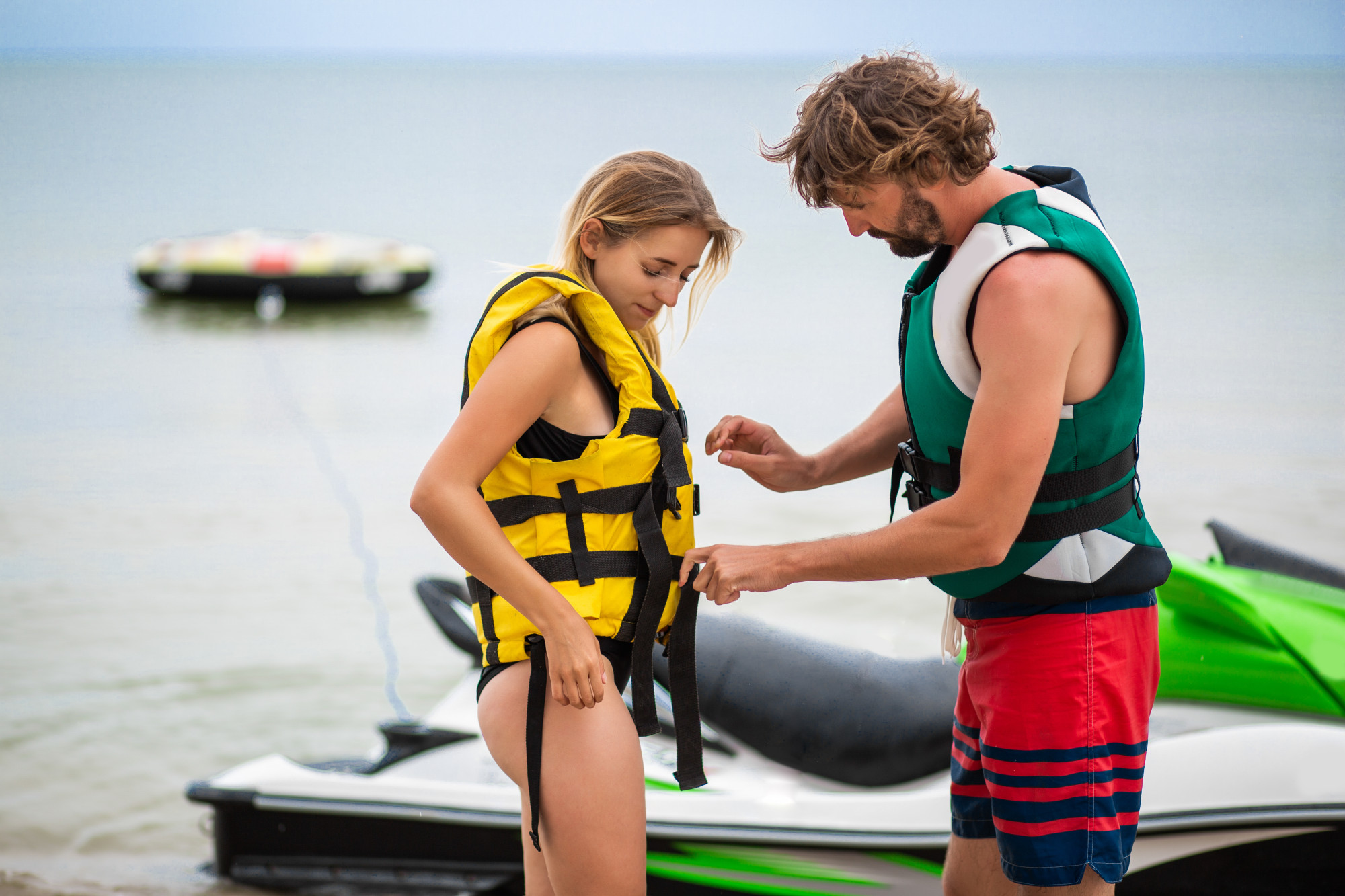 For those engaging in water sports, it’s important to use a safety flotation device, like a life jacket. Photo: Shutterstock

Having a safety buoy is smart because it is usually visible from afar, Nguyen says. And even if you don’t use it for yourself, you can pass it to someone else who may be struggling.

The caveat is that you have to take care of yourself first and ensure that you are safe and able to tread water. 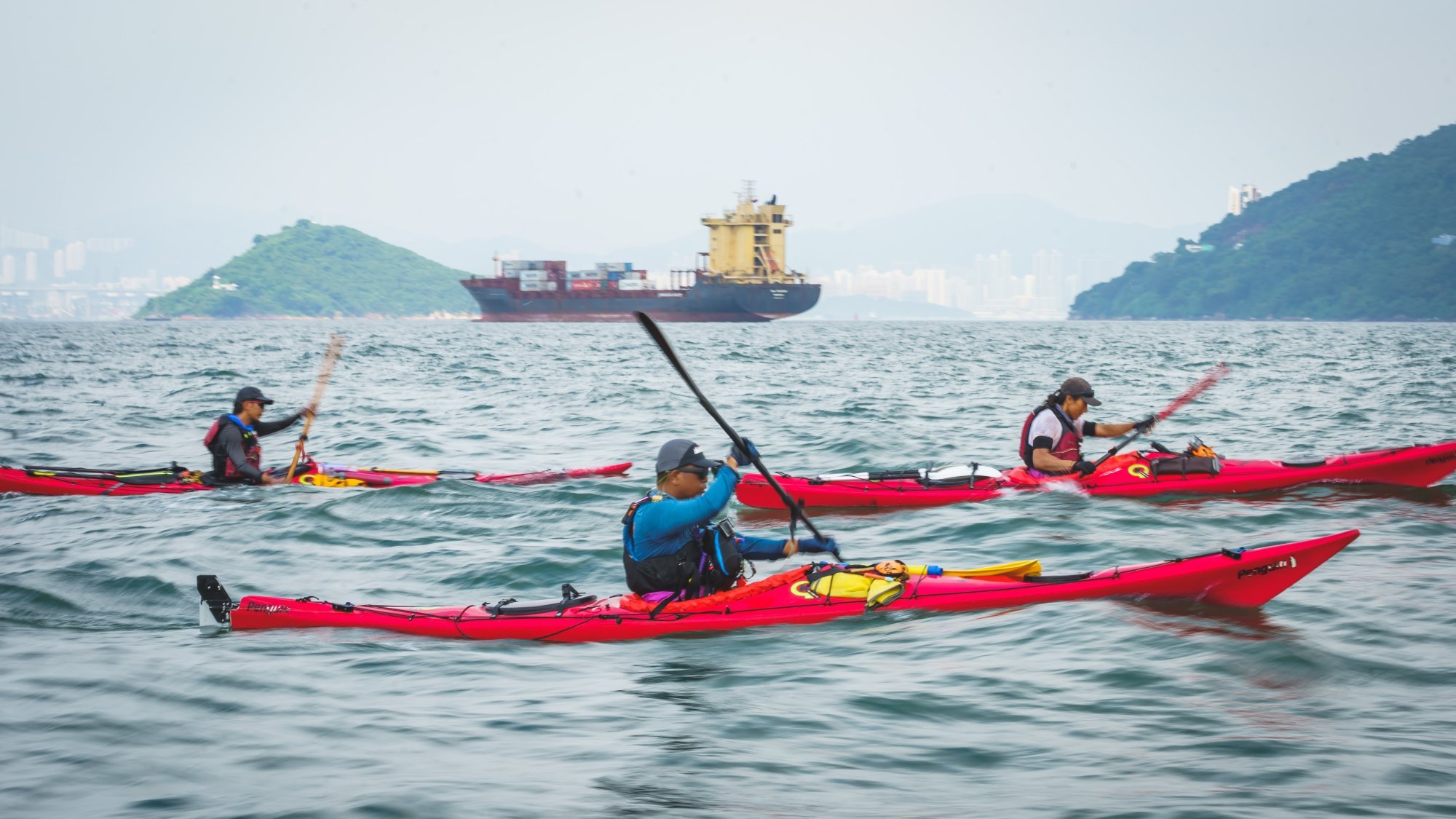 Stephen Ho, vice-chairman of the Hong Kong Canoe Union, recommends dressing appropriately to avoid sunburn or hypothermia, and to go in groups of three when kayaking in case somebody capsizes and needs help. Photo Karen Chan

In the sea, weather can create unpredictable wind and waves. “We cannot control the weather, we cannot control [how] nature changes, so that is the major hazard we are facing,” Ho says.

For kayaking specifically, he recommends dressing appropriately to avoid sunburn or hypothermia, and to go in groups of three.

“When somebody capsizes, and the weather gets rough, then it’s much better, much easier, to have two people to rescue one compared to the one-to-one rescue,” he says.

If someone capsizes and falls into the water while kayaking, all they have to do is stay calm and hold on to their paddle and to their kayak, which is itself buoyant. Afterwards, companions, or even strangers, can help them get back into the kayak if they cannot do so themselves.

No matter which water sport you choose to enjoy, Ho emphasises the necessity of adequate training to avoid drowning.

Using kayaking as an example, he explains that without instruction, people might use and exercise the wrong muscles, which can easily lead to physical fatigue after a short period of time and cause people to panic.

Prevention is key, but what happens when someone is struggling in the water? Trying to reach a lifeguard should be the first step, but if that’s not possible, the best thing to do is either to float over something that the drowning person can hold on to, such as a safety ring, life jacket or buoy, or throw them a rope, Nguyen says.

She notes that rescues are often glamorised in films and TV shows, in which the rescuer dives in to save the struggling person themselves. In reality, that can be dangerous, as people who are drowning can drag you under, especially if they are bigger or stronger than you.

“A lot of people are quite violent when they’re in a life-threatening situation, so you want to be able to not have any contact,” she says.

Given the number of drowning cases and rescues in Hong Kong every year, Chan hopes more people, especially young people, will become involved in life-saving.

“Self-survival knowledge is important to oneself, but also, you can render service to the public,” says Anthony Chan Wai-lun, chairman of the HKLSS.

Because the number of swimming pools in Hong Kong has increased in recent years, there’s an increased demand for qualified lifeguards, and the lack of them is a serious issue, he says.

Since professional lifeguards must requalify every three years, the HKLSS is appealing to the government to make more venues available for training classes and examinations.

Given that Hong Kong is surrounded by sea, people should have basic swimming skills, Cheung says, both for leisure and life-saving purposes. The fear of drowning shouldn’t stop people from enjoying themselves in the water, but it is crucial that they stay alert.

One simple piece of advice that’s easy to remember? “When in doubt, get out.”

How to Show the Battery Percentage on Android

From strokes to depression – Dr Jeff answers your health questions

Why Our Brain Wiring’s Insulation Matters

The best places to see fall leaves near Toronto, plus more autumn activities in Ontario

Have thousands of unread messages? How to get a handle on your inbox

How To Use A Coffee Can As A Last-Minute Grill

How to Turn On a PS4

DO you know the “proper” way to eat a Pot Noodle? An etiquette expert revealed on TikTok how to eat the tasty snack in polite company, with her video clocking up millions of views. If you are eating a greasy bacon sandwich, it should be eaten completely with a ...


View more: I worked as a butler for King Charles and here’s how to eat your favourite foods in high society

Hidden trackers invade your browser – How to delete them

Hidden trackers invade your browser – How to delete them As long as your phone is on, it’s sharing data. This happens whether you have an iPhone or Android, but one company is tracking much more than the other. Tap or click here to see if Apple or Google ...


View more: Hidden trackers invade your browser – How to delete them


View more: From more sex to broccoli stalks – 12 ways to boost your health for FREE


View more: Research to determine if the monkeypox vaccine can cut down to 1/10 of the full dose

How to Reset/Reinstall Windows Without Losing Your Files

It is common for PCs to malfunction, display errors and perform poorly. Sometimes, the only solution to fix some of these issues is to reinstall the OS, but this could mean losing your files. The good news is that you can reinstall Windows 10/11 without dealing with this inconvenience. ...


View more: How to Reset/Reinstall Windows Without Losing Your Files

HUNDREDS of thousands of hard-up Brits are having credit scores ruined over unpaid bills. The number of County Court Judgements (CCJs) being handed out are on the rise, with a seven per cent jump between April and June this year compared to the same period in 2021, according to ...


View more: Thousands of hard-up Brits having credit scores ruined over unpaid bills – here’s how to get help

Overactive populations of osteoclasts may result in a variety of disorders such as osteoporosis, arthritis, and cancer. A new function for a protein that regulates osteoclasts—the cells that break down bone—has been discovered by researchers, and it may pave the way for the creation of new treatments to prevent ...

This Might Be The Easiest Fix For Bitter Tomato Sauce

How to complete the Generous Boss Challenge in BitLife

The healthiest and unhealthiest items from the ice cream truck

How to get the Tank Liner in Slime Rancher 2

Explaining the Most Baffling Quirk of COVID: Common Gene Variant Linked to Mortality

How to prepare for emergencies on a budget

How to make a Kaizaar Weapon in Phantasy Star Online 2: New Genesis

Joyce vs Parker: How to watch fight online and on TV tonight

How to complete all deeds in Sea of Thieves: The Siren’s Prize

How to cook Frozen Jalapeno Poppers in Air Fryer!

Microsoft Forms vs Google Forms: Which is better?

What channel is Floyd Mayweather vs. Mikuru Asakura on tonight? How to watch, buy 2022 boxing exhibition fight

How to unlock the Bruen .45 Handgun in Modern Warfare 2 Beta

Mayweather vs Asakura LIVE: Stream, latest updates and how to watch fight

From kombucha to energy and protein products, we test new health drinks

How to get Rings fast in Sonic Speed Simulator – Roblox

How to Declutter Fast - 10 Simple Steps

What Is RFID, and Is It Really a Security Concern?

When Is the 2022 Chicago Marathon? Here's Start Time, Course Route, How to Watch and More

Stacey Abrams abortion row: Is there a fetal heartbeat at six weeks?

How to get an upgrade when flying on major US airlines

Is There A Nutritional Difference Between Fertilized And Unfertilized Eggs?

Splatoon 3&colon; How to Get Conch Shells

What Is a Controller Dead Zone, and Should You Change It?

Is Northern Ireland vs Kosovo on TV tonight? Kick-off time, channel and how to watch Nations League fixture

How to unlock Jet the Hawk in Sonic Speed Simulator – Roblox

How to unlock Riders Rouge in Sonic Speed Simulator – Roblox