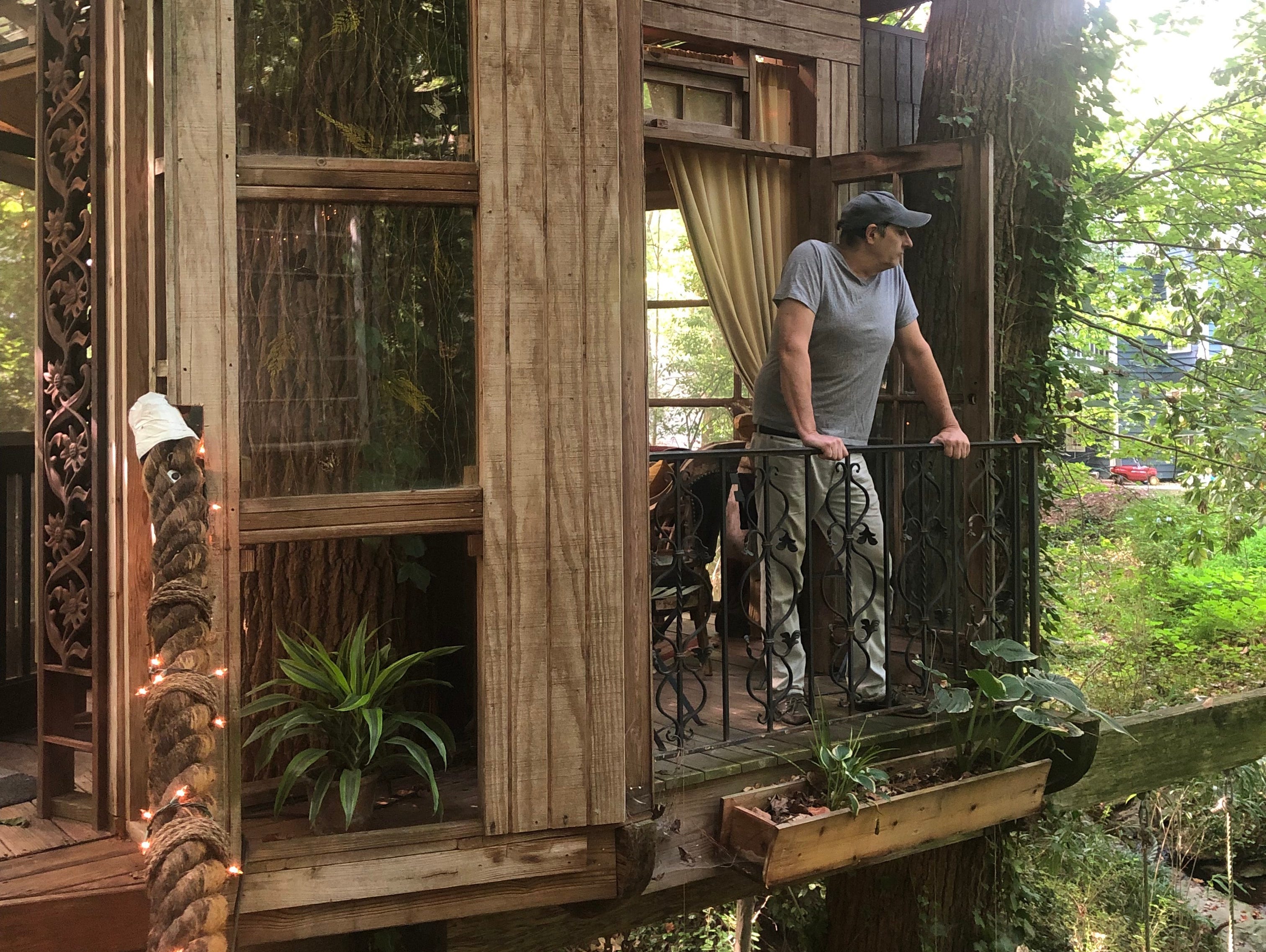 This as-told-to essay is based on a conversation with Peter Bahouth, an Airbnb owner outside of Atlanta, Georgia. It has been edited for length and clarity.

I built my treehouses 24 years ago, and I never imagined them as an Airbnb. I had a totally different career running big organizations, but my creative project turned out to be financially sustaining for me.

Some articles about the treehouses say I’m an architect, but I’m not one. I just seem like one online.

When I was a kid, I had a terrible treehouse

It was just a board in an 8-foot tree. But when I went up there, I loved it. It was like my kingdom. I couldn’t fix it up because I was a kid with no money, but I always wanted to. Then when I moved to Atlanta, I bought this house that I really liked. I noticed there was this empty land next to me, so I bought it too. 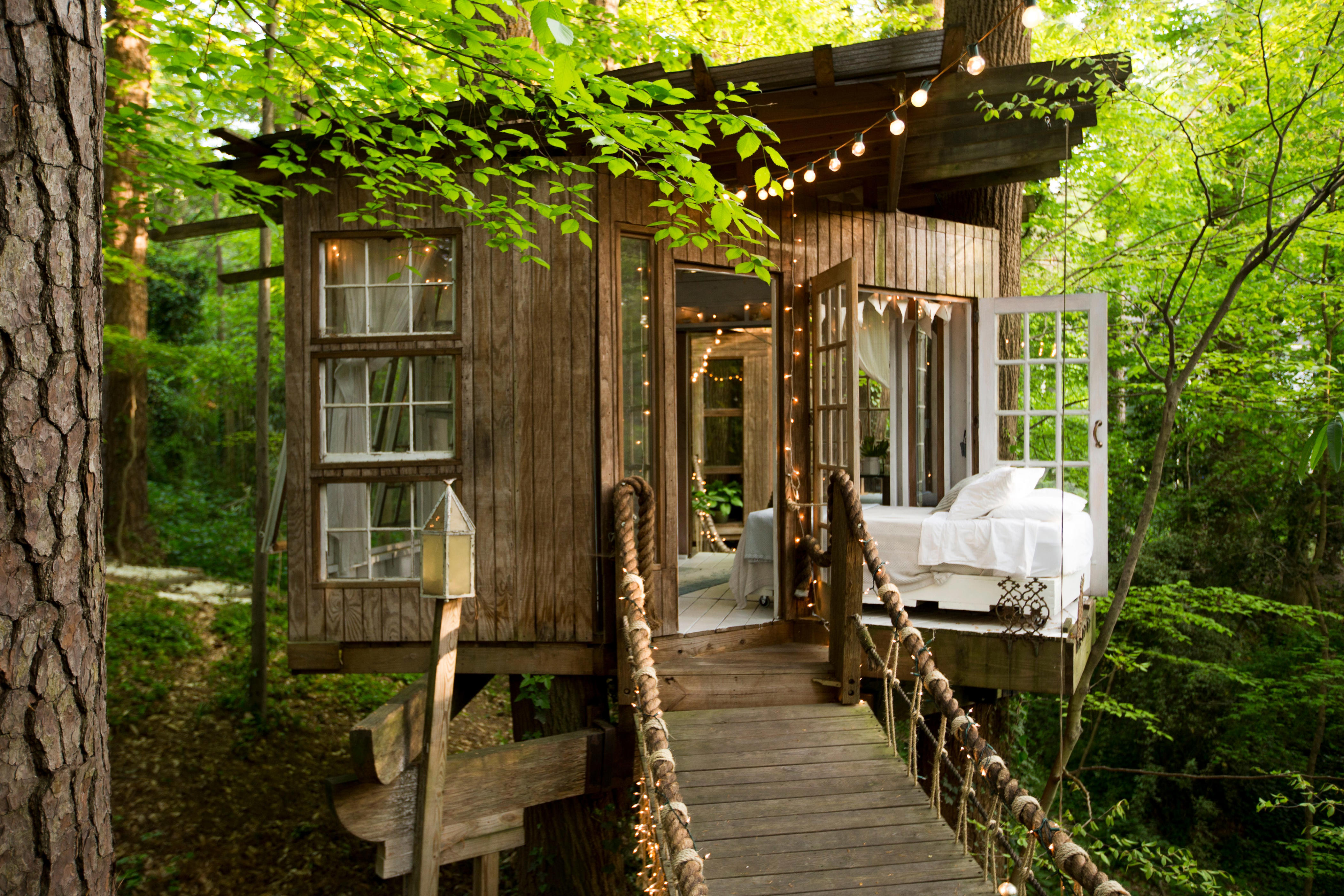 It took me a while to buy it. The person didn’t want to sell, but it was an extra acre, and it was beautiful. At first, I never even went out there. Then I said to myself, “You know what, there’s one way to get out there, and that’s to build that treehouse.”

I loved to sleep outdoors when I was a kid on my grandpa’s porch, so I wanted my treehouse to have a bed that you could roll out and sleep on. When I thought of that, I said: “Well, If I just have a one-room treehouse with a bed in it, that’s the creepiest thing in the world. No one would ever go up there.”

I figured I’d build 3 rooms and connect them

The first room is a sitting room; the second room is the bedroom with the bed that rolls out; and the third one is a deck around this beautiful, magnificent more than 100-year-old tree. I now describe the trio as “mind, body, and spirit,” and it’s perfect. 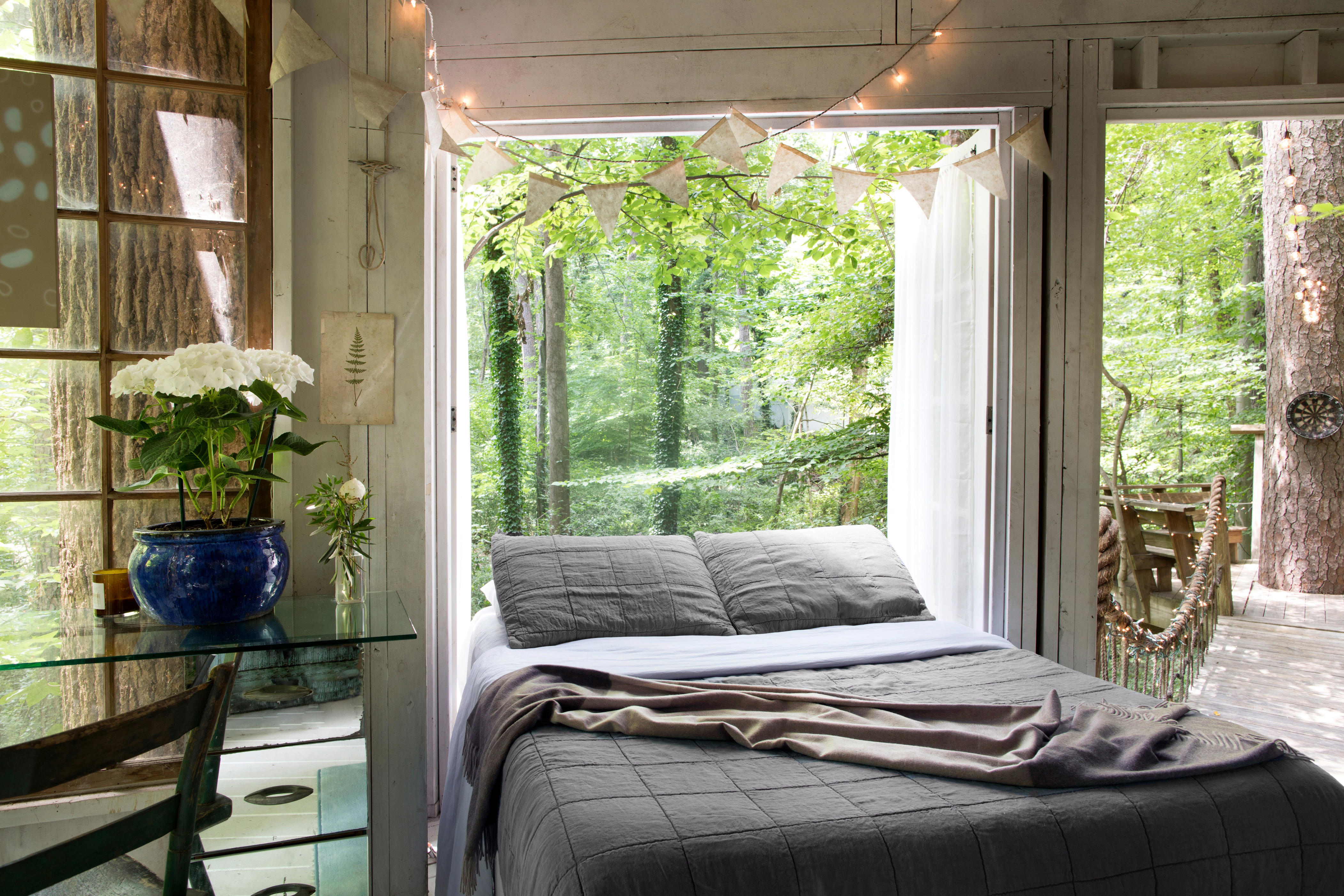 It worked out in ways that I certainly didn’t imagine. Right from the beginning, the trees were very significant to this place, and they still are.

When the listing went up on Airbnb, I don’t know what happened. I did absolutely nothing, but it really rang a bell and people took to it. It became a really big thing.

At first, I didn’t think anybody would come

I really didn’t. I was like, “Who’s going to stay in a treehouse when they come to Atlanta?” Now I’ve met more than a thousand people who have. It’s unbelievable. I have reservations two years in advance. The guests have left these great letters, and the reviews are amazing. 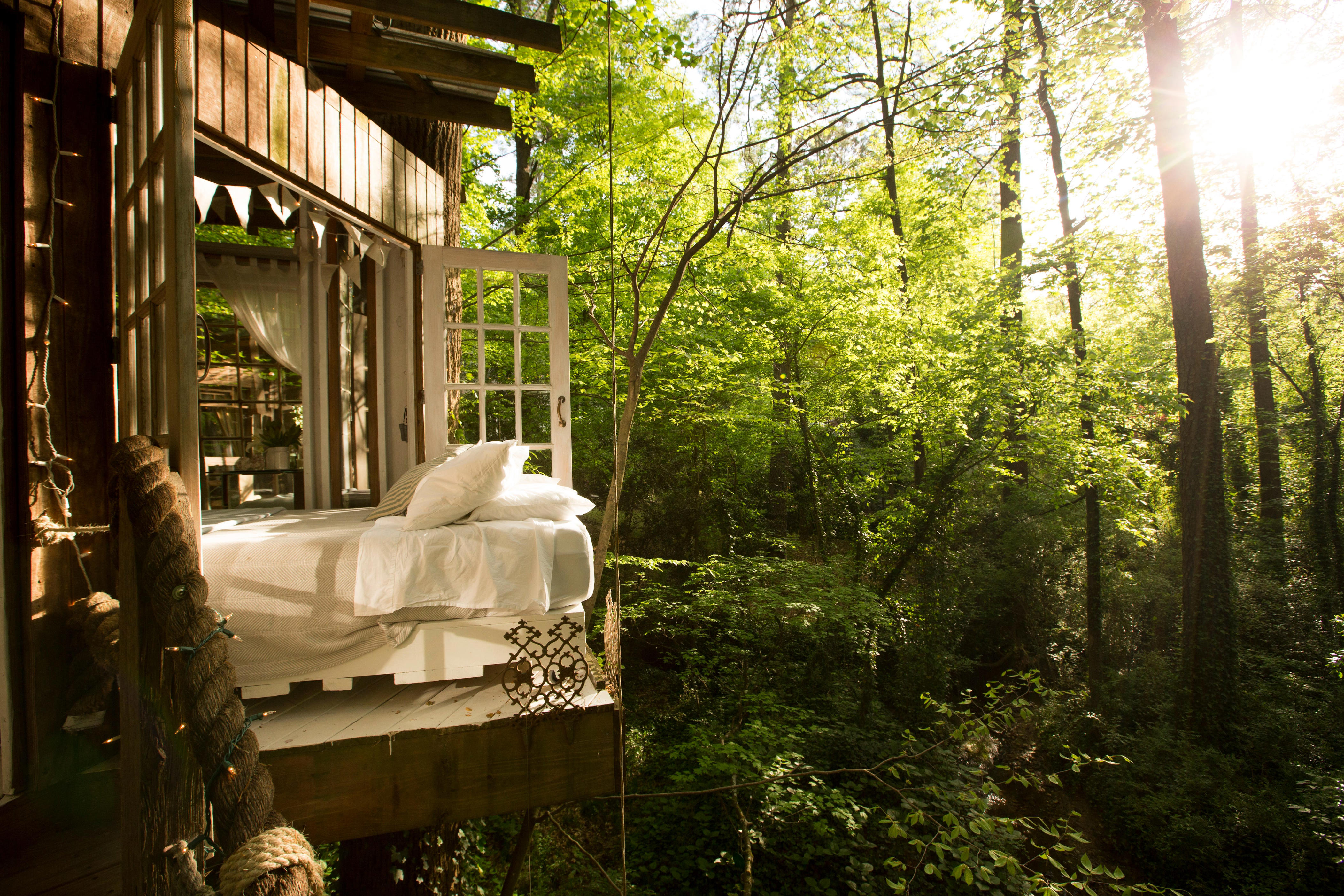 Sometimes there’s a cancellation and the right person gets it, and instead of waiting two years, they find a spot in two weeks. It’s like there was a reason for them to come here at that time. It’s right before they’re having a baby, or it happens to be someone’s wife’s birthday.

It’s a fascinating thing to me, and I’m learning a lot. I’ve learned how to be a host. I’m from the North and I’m rude, but you’ve got to be gracious as a host.

I don’t think it takes a genius to be a host, but I’ve had to learn

I’ve had thoughts like, “Am I spending too much money on amenities?” Now, I’ll just go buy orchids and a nice bottle of wine. I’ll give my guests the best that I can give them. Why not? I’m making enough money to pay my mortgage. 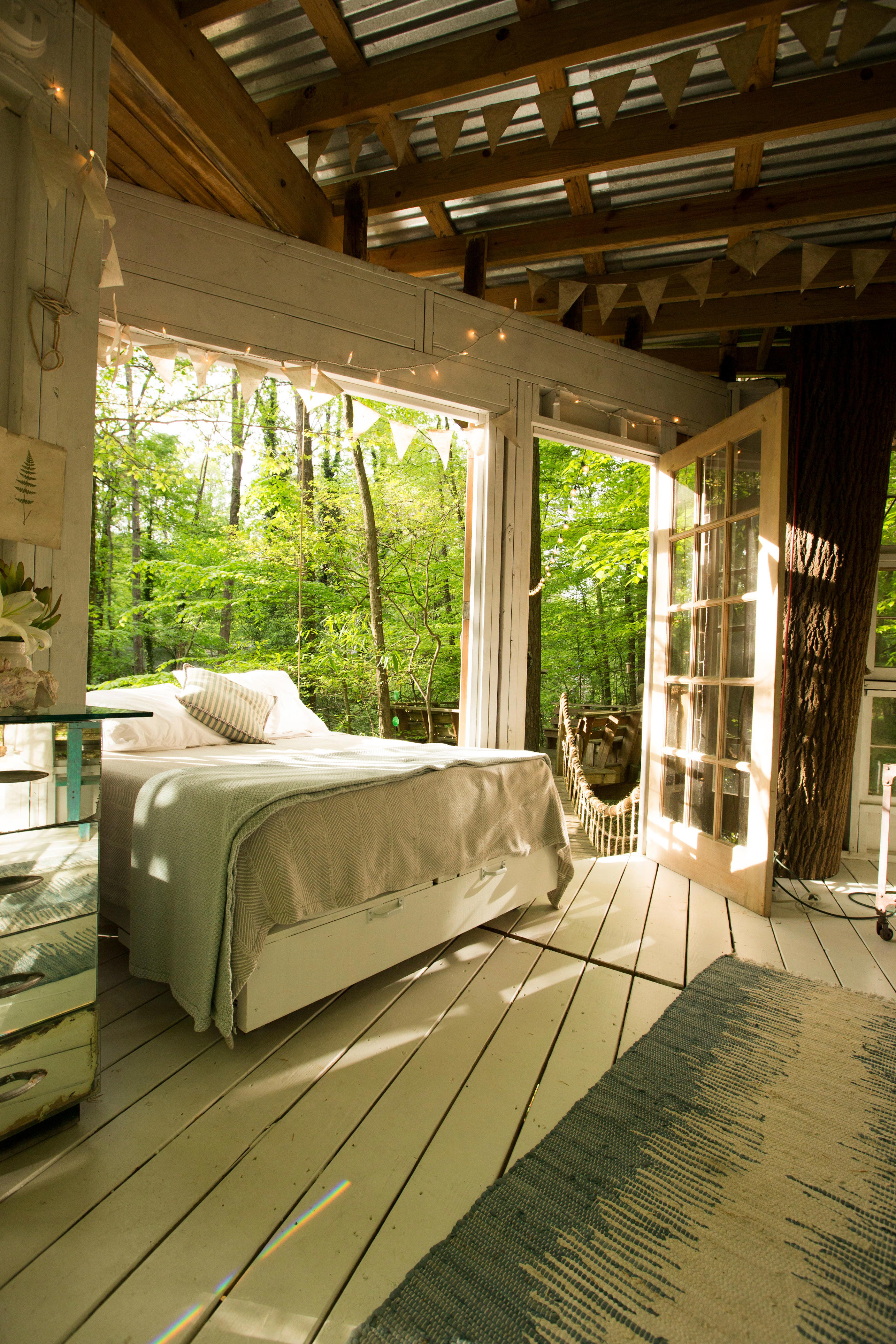 I do well because I’ve got a special place and I really work hard to make it great for people. That’s the only way you can survive in this, and that’s why I’m doing fine financially. I don’t need 20 Airbnbs, and I don’t need to gouge people. People don’t like that, and it’s not going to give you two years of reservations.

My prices have been the same for four years — $389 a night. I want people to enjoy the experience. That’s what’s valuable to me. I want people to come away saying, “That was totally worth it. I waited two years, and it was worth it.”

It’s such a popular place, I get a ton of emails. It’s not all for reservations either. It’s people asking me how to build a treehouse. It’s so popular, it was even named the No. 1 most wished for Airbnb in the world in 2017.

The trees also require a lot of maintenance

For example, between the trees are thick rope handrails, which no one makes anymore. I had to replace all of them this year, and I couldn’t find the rope. No one had it. 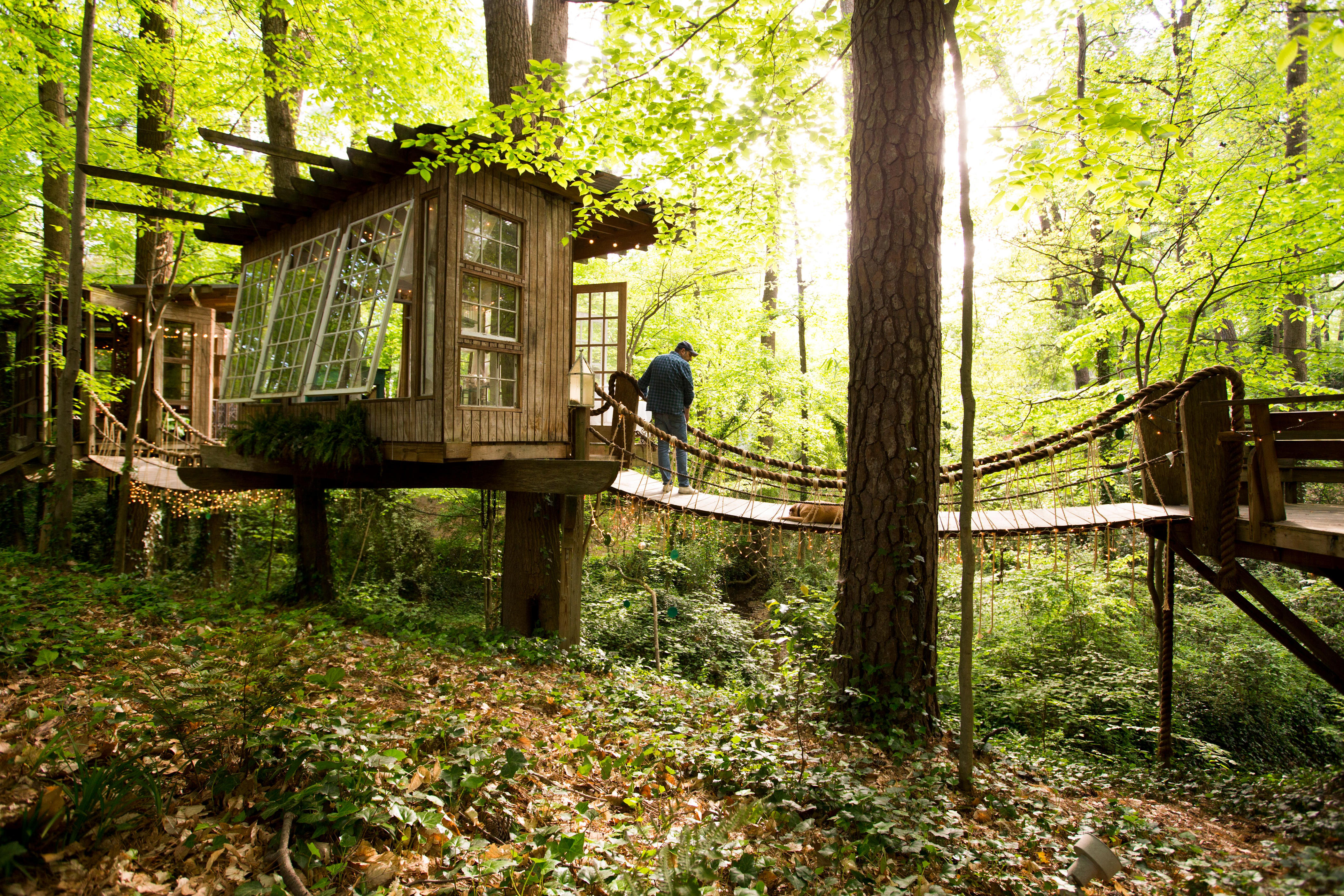 Then, I remembered I had two guests here who were from China. I felt like they might have some connections, so I gave them a call and I said, “I have to have these ropes. They don’t have it anywhere in America and I’ve got a feeling there are some in China.” And they found the ropes and brought them for me!

I also always have people climb to the top of the trees every year to make sure no limbs fall, and I take good care of the health of the trees.

Otherwise, being a host entails things like making sure everything is clean, putting out flowers, replacing lights, and putting together a welcome basket for guests.

During those four months, I have a list of things I want to do. For example, I always paint the bedroom because it has a white floor. You can only imagine what a wooden floor outside does after a season. 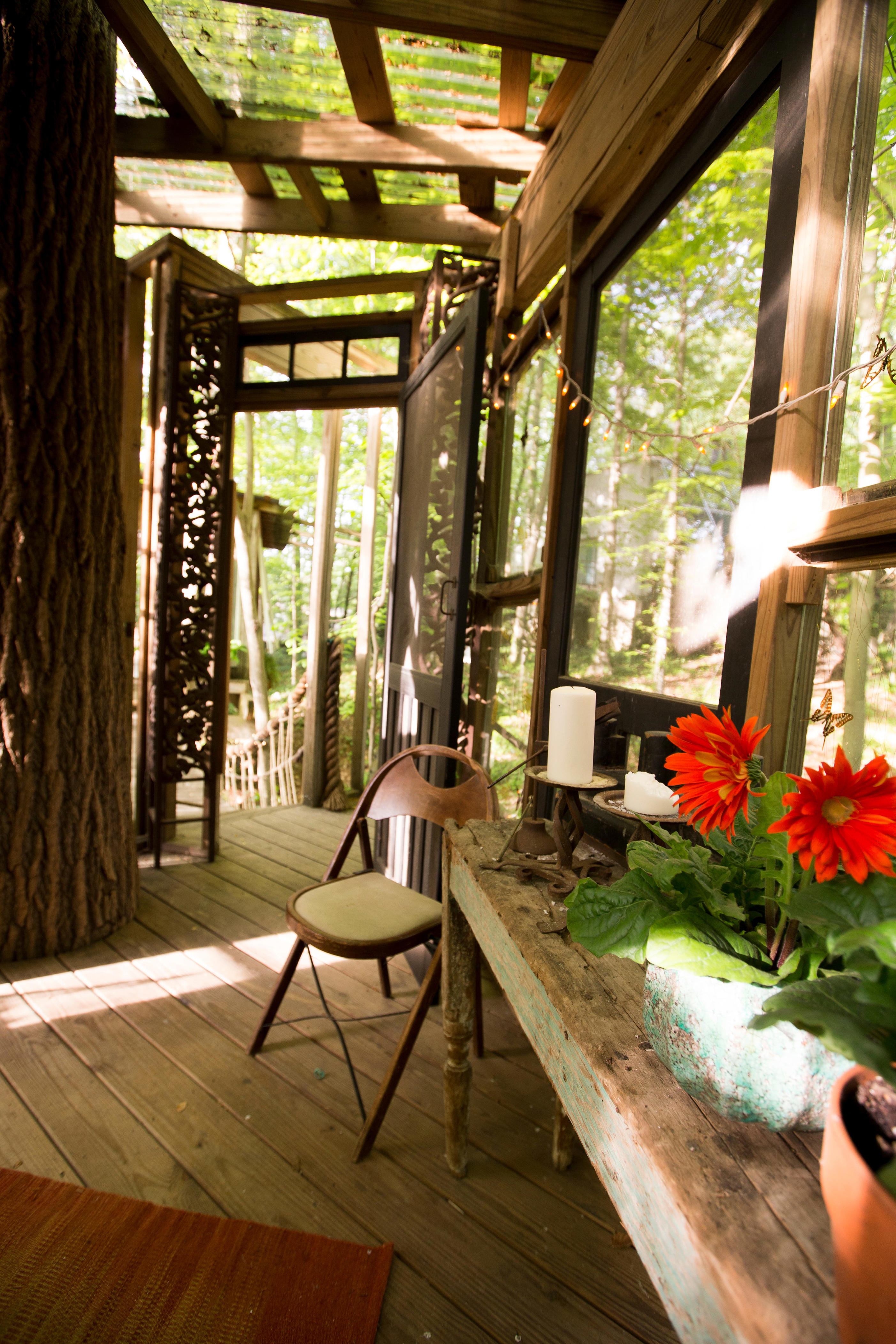 There’s nothing like traveling the world to learn, but I’ve learned so much since not leaving my driveway. I can tell you about our relationship to nature. How nature is all around us and we shouldn’t be trying to manage every little piece of it.

Being able to be around something like the treehouse that has character, personality, graciousness, and a welcoming thing about it makes people feel great. It’s amazing.

Howard Stern Calls Out Oprah for Showing Off Her Wealth: ‘It’s F—ing Wild‘ Because ‘There Are People Struggling Out There’ Howard Stern is taking Oprah Winfrey to task over showing off her wealth on social media. During the Nov. 28 episode of “The Howard Stern Show” on SiriusXM (via ...


View more: Howard Stern Calls Out Oprah for Showing Off Her Wealth: ‘It’s F—ing Wild‘ Because ‘There Are People Struggling Out There’

Donald Trump (Photo by JEFF KOWALSKY/AFP) Donald Trump is going all-in on attacks against the family of special counsel Jack Smith. Instead of mounting a defense for his actions, Trump deployed one of his top tactics: attacking anyone trying to hold him accountable. One of Trump’s right-wing allies posted ...


View more: Trump is now attacking the sister-in-law of the special counsel

GettyImages-1238885528.jpg An Amtrak train collided with a FedEx truck Monday morning, killing the unidentified delivery driver. The train, on a New York to New Orleans, Louisiana, route, was traveling through Haralson County in Georgia at around 11 a.m. on Nov. 28 when the collision happened, according to Amtrak. The ...

Harbaugh, Lamar Jackson met after 'out of character' tweet OWINGS MILLS, Md. — Baltimore Ravens coach John Harbaugh said Monday that Lamar Jackson's vulgar response to a critic on social media was “out of character” for the Pro Bowl quarterback, suggesting Jackson got “trapped” by someone baiting him. Harbaugh ...

“Let me tell you, son…“ When Spain obliterated Costa Rica 7-0, former Manchester City and current FC Barcelona winger Ferran Torres helped himself to a couple of goals. Celebrations are of course part of the game, but Spain coach Luis Enrique has a bone to pick with Ferran if ...

As shoppers seek out the best deals on Cyber Monday, Amazon fulfillment centers across the Chicago area are busy fulfilling orders across the Midwest. One facility, a 3.8 million square foot building in south suburban Matteson, is filled by robotic moving shelves that store small items and bring them ...

Mark Cuban on crypto amid FTX implosion: 'Separate the signal from the noise'