Exclusive interview: The Mercedes star speaks about the ‘thrill’ of his pole position in Budapest and finding the right balance away from racing 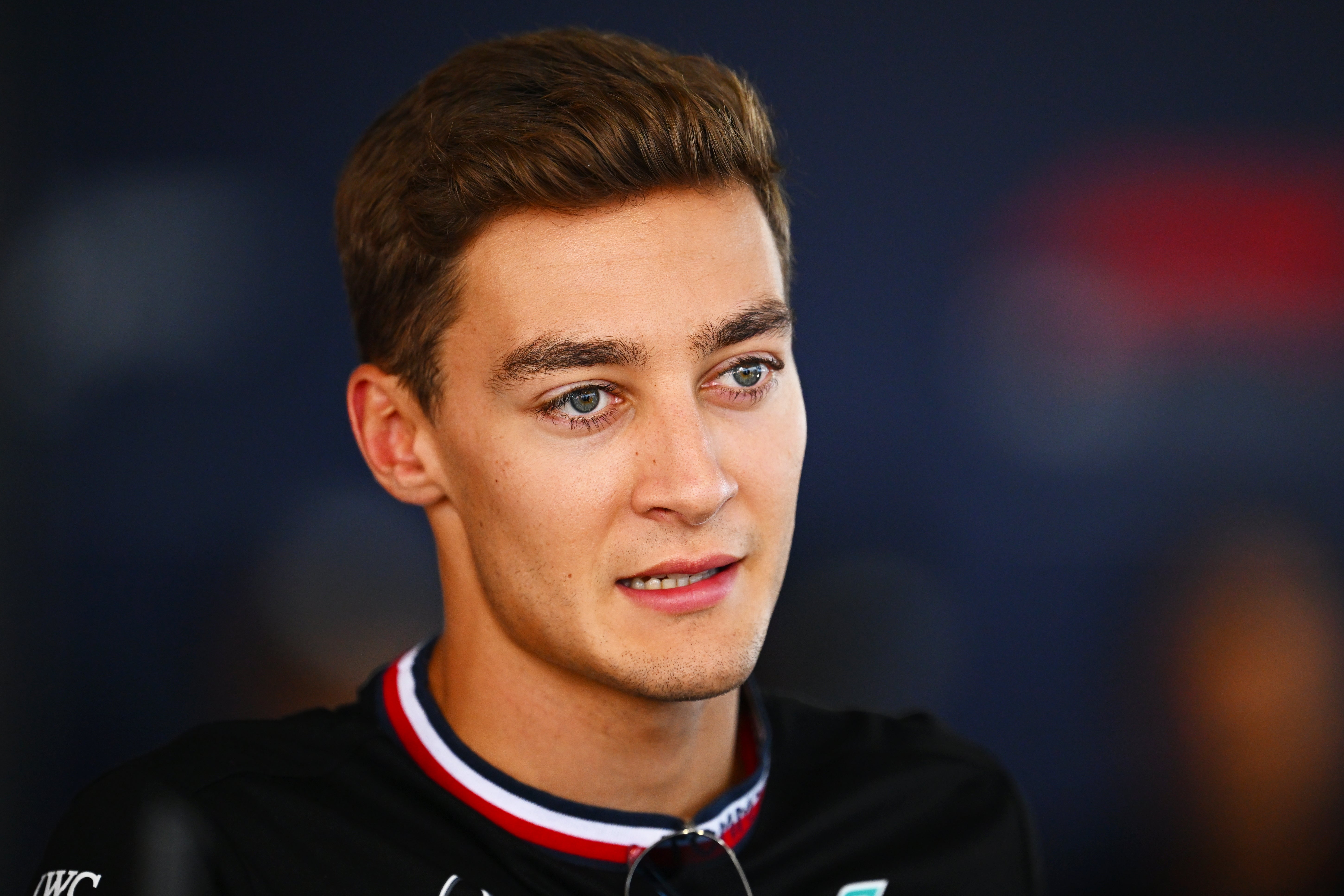 For a man whose irrepressible ambition and unique talent has taken him to the cusp of Formula One’s summit, George Russell could be forgiven for thinking 2022 hasn’t quite matched his lofty expectations. Waiting in the wings – aching for three years at the back of the pack with Williams – the 24-year-old’s long-heralded spot in the Mercedes garage was, most assumed, the final step on the road to fulfilment. Grand Prix victories, and subsequent title pursuits, were surely a slam-dunk inevitability.

Yet the scale of the struggle at Mercedes this season, toiling with their car’s violent oscillations and unpredictability, sees the Brit widely praised for his steadiness behind the wheel. With six races to go, Russell is 35 points ahead of his teammate Lewis Hamilton and Charles Leclerc in second is just 16 points clear, as F1 heads to the humidity of Singapore for the first time in three years this weekend.

But despite the commendation, with seven podiums to his name and a top-five finish in every race bar one, race-by-race consistency is not the ultimate aim of the game.

“I don’t care about finishing second in the Championship, it’s not my goal,” Russell sternly tells The Independent, in his team’s Monza motorhome.

“We’re all here to win. You give me a choice between finishing fourth in the Championship and having a race win or two under my belt or finishing second with no wins, I’ll take fourth. That is now the position we’re in, we want to win a race.

“If I joined a year prior, I knew I would’ve had to come in and win because that’s what would’ve been expected. I’ve quite enjoyed the challenge of working with the team and trying to overcome problems and maximise every single occasion. Times like Budapest – that thrill and buzz was like nothing I’ve ever experienced before but was also because it was so unexpected.”

That pole position in Hungary back in July was Russell’s first in Formula One and stunned the whole paddock; not least his own team who had been at the track until midnight the preceding evening.

“Everyone had their head in their hands, confused,” he recalls. “So that pole was such a special moment which it made it all worth it. It’s definitely more rewarding, we’d been working so hard towards that.”

There is no let-up from Russell in his debut year for the Silver Arrows. Two rounds ago in Zandvoort, a decisive call to switch to soft tyres earned him his season-best result of second, notably to the detriment of Hamilton. Such a moment could have been labelled a strong statement of intent from Russell, making his Mercedes mark in spite of the seven-time world champion alongside him. Yet as he points out, this is a relationship forged not in nine months, but in five years. 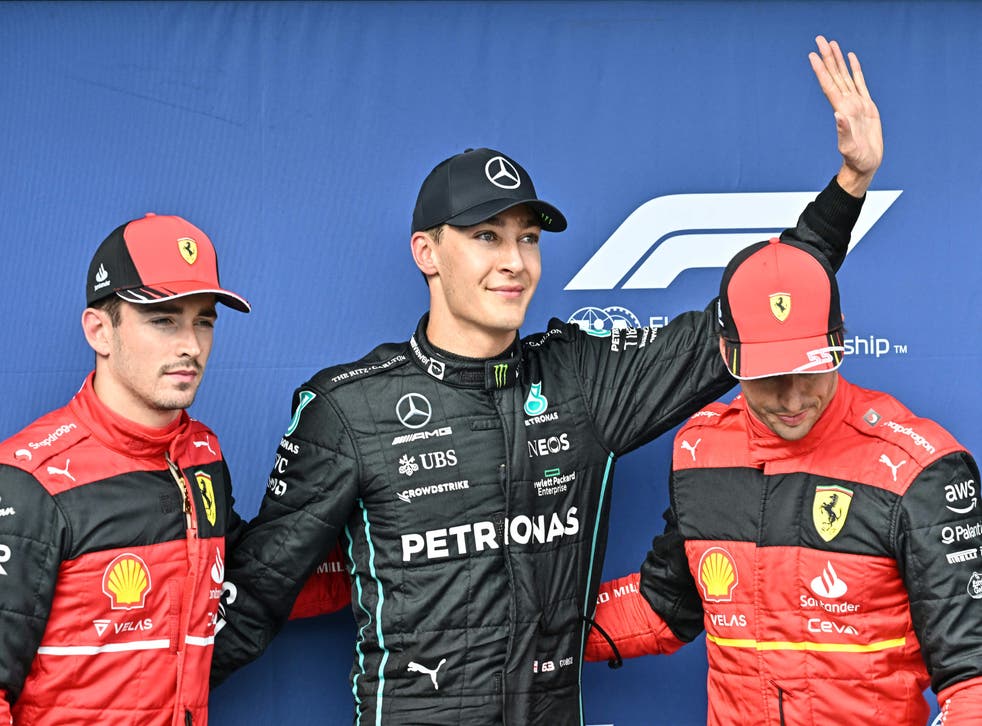 “I was actually the young kid on the block in 2017 when I raced in Formula Three,” he explains. “When I was a reserve driver, I was in all the engineering meetings. I was going to the curry house every Saturday night with the Mercedes engineers, so those relationships have been built and almost didn’t need building.

“There’s trust and confidence between one another. If they turned around and said stay out, I wouldn’t have questioned it but equally if I switch tyres and even concede position, I know that’s what we need to do.”

Frankly, why shouldn’t Toto Wolff not trust Russell’s instincts? His record speaks for itself. He won GP3 in 2017. A year later, he was Formula Two champion. And even in a struggling Williams, his qualifying lap last year in damp conditions at Spa, earning him second, was one for the ages; and the final nail in Valtteri Bottas’s Mercedes coffin.

Yet for all the accolades on track – with the best surely yet to come – Russell’s adaptation to life firmly in the public eye away from the cockpit deserves equal acclaim. He details how he can no longer leave his flat in London without being recognised, hounded for an autograph. This interview, for instance, occurs hours after a 15-year-old boy started crying outside his Monza hotel following a selfie. That fame does not escape the attention of his family, too. 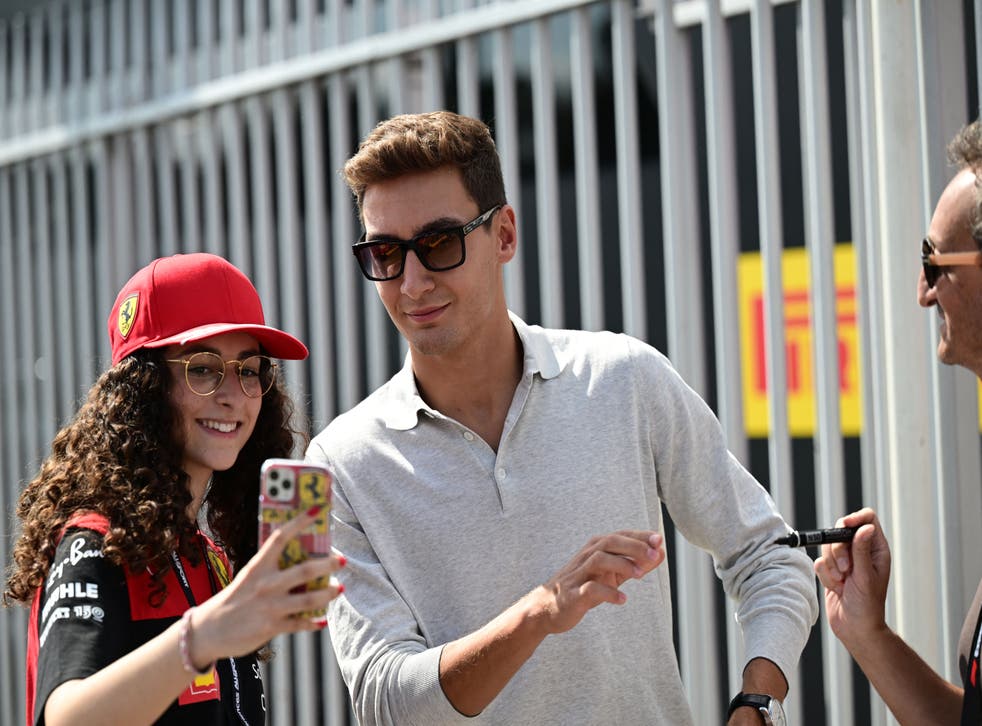 “My brother and sister are in their thirties, my brother has two kids and is living in Leeds,” he tells, with a glint in his eye.

“I’m treated like an uncle but I do have my five-year-old nephew going on my brother’s phone saying ‘hey Siri, who is George Russell’s nephew?!’ It’s quite funny seeing him trying to find himself on Google.

“I feel like we’re all in this together. We live and breathe it, my success is our success. If I have failures or disappointments, they all feel it.

“I’ve gone from a team at the bottom of the grid to a team at the top and to be honest I have noticed that [increase in fame]. It was quite a shock at first but it’s quite a special feeling and it’s incredible to see how much it means to these people.”

But what about using that fame for a greater purpose? Russell paints a pretty picture of his life regularly to his 3.8 million followers on Instagram yet carries himself with an aura of maturity and assuredness within that bubble. While Hamilton, 13 years his senior, uses his platform to promote issues close to his heart, Russell can foresee a time where he takes on a similar mantle. No rush, though.

When asked if he could see himself one day speaking out against social media abuse, something he has been a recipient of, he says: “I definitely want to be part of a positive change where needed in society and sport. But equally I do look in the mirror and think: I’m 24 years old and I have a lot to learn in this regard and with racing as well. 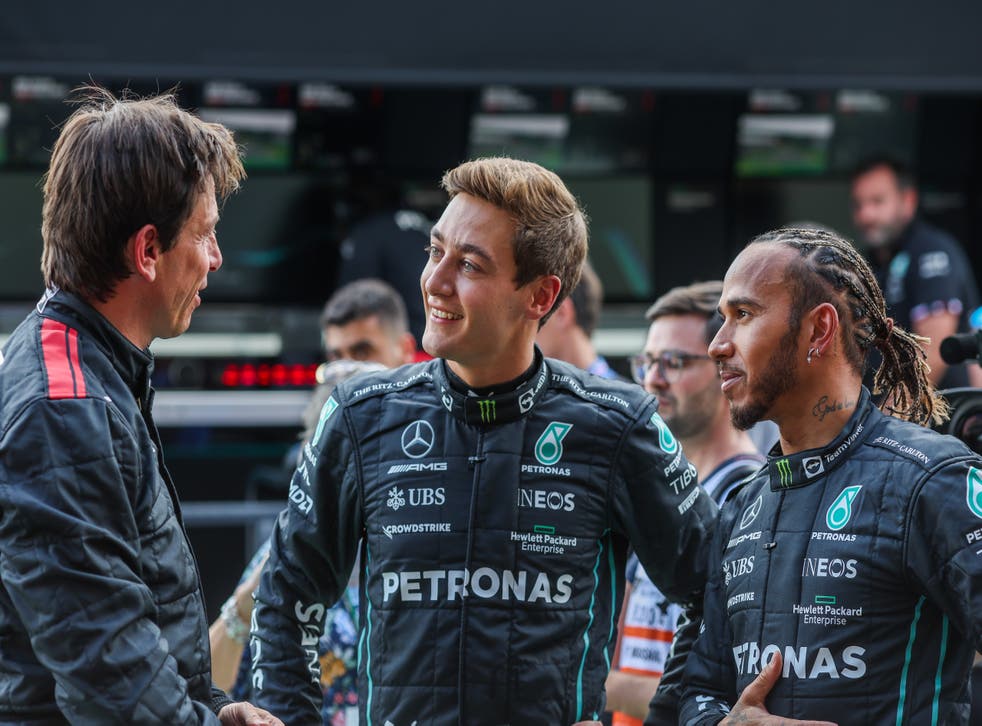 Russell has an excellent relationship with Toto Wolff and Lewis Hamilton

“The more successful I am on the track, the more potential power it gives me off the track. Lewis is at an age now where he knows exactly what he needs to do to get the most out of his racing and that also gives him the opportunity for his off-track activities.

“I’m still trying to find that right balance. But I’d definitely have a lot of pride in looking back in 20 years’ time and seeing that I’ve not only had the on-track success but have also brought about positive change in a different regard. It’s probably something I’ll look towards in a couple of years.”

Russell is continually looking forward, eyeing the next challenge on his globe-trotting F1 career. Much depends on Mercedes’ car design next year, up against Red Bull and Ferrari, and whether a change of philosophy yields much-needed performance gains.

“The ultimate goal is still to win a Championship,” he sums up. “But this year, I’d certainly prefer to be in our position with a car that has not had the pace but has got results than say Ferrari, who have the fastest car on the grid but could now finish third.”

Constantly striving for more, and far from satisfied, the question looms: if this is how Russell performs and carries himself in a year of frustration, what can be expected in 2023 if he has the right tools at his disposal?

Bones found in a Georgia landfill were the remains of missing toddler Quinton Simon, the FBI confirmed Monday. The agency said it was able to confirm the 20-month-old’s remains through DNA analysis and has now stopped the painstaking search of the Superior Landfill in Savannah, Georgia. Little Quinton’s mother, Leilani ...

The Beatles, 1962 Prior to Ringo Starr joining The Beatles, the group consisted of (l-r) George Harrison, John Lennon, Paul McCartney, and original drummer Pete Best, all here in a club prior to signing their first recording contract in Liverpool, England in 1962. Best was cut from the group and Starr ...


View more: The Beatles: The lives and musical careers of John, Paul, George and Ringo

Quinton Simon was reported missing last month and whose mother was arrested last week on charges including murderChatham County police said on November 21 that they had arrested Leilani Simon, 22, on charges of malice murder, among others The FBI used DNA analysis to confirm that the bones belonged to 20-month-oldThe remains that were determined to be Quinton's were found in a landfill on November 18

The Atlanta division of the FBI has identified remains found in a Georgia landfill as those of toddler Quinton Simon, bringing an end to the weeks-long search for the child that garnered national attention. Bones found in the Superior Landfill in Savannah were found to belong to the 20-month-old through ...

Princess Andre showed off just how much she looks like the other females in her family as she shared a sweet family snap on Instagram on Monday. The daughter of Katie Price and Peter Andre took to the social media site to share a picture of her self hugging her ...