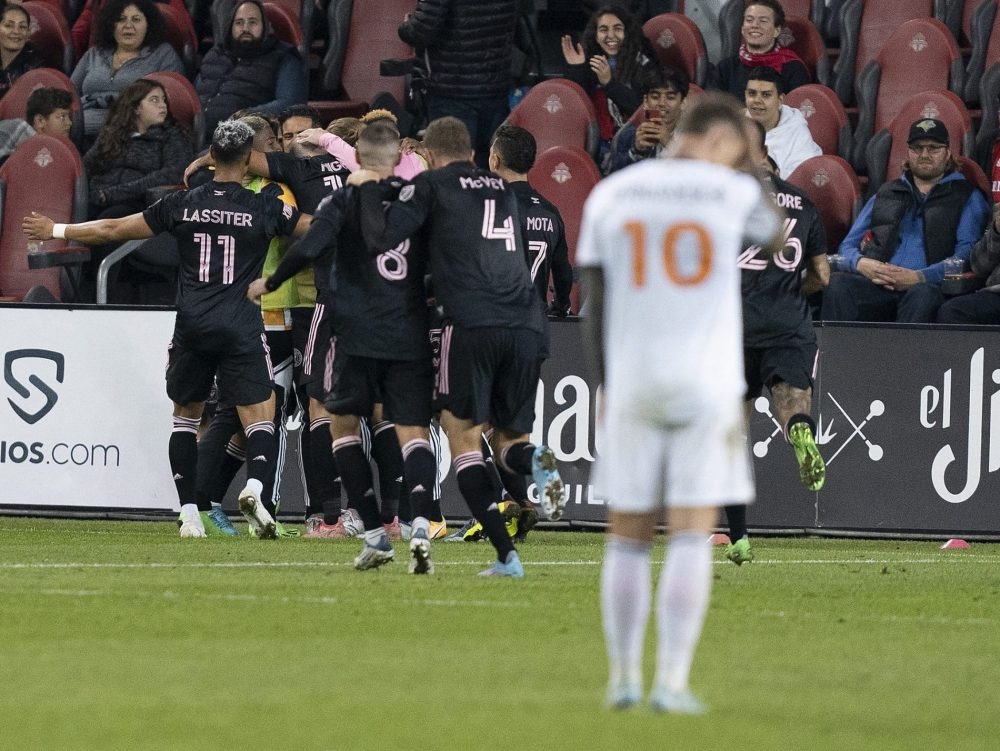 Inter Miami players celebrates after Gonzalo Higuain scored the only goal of the game against Toronto FC on Sept. 30, 2022 at BMO Field.

Donuts as is zero goals.

Worse than that, the Reds gave up a goal by Inter Miami star forward Gonzalo Higuain with only four minutes remaining to lose their final home game of the season, 1-0. TFC closes the MLS regular season on Oct. 9 at Philadelphia. Toronto (9W 17L 7D) has lost four games in a row and will miss the MLS playoffs for the second year in a row.

“I think the work to build this team and this roster needs to continue,” said TFC coach Bob Bradley, when asked what he has learned from this season, which has obviously been a disappointing one. “There was a lot that needed to be done this year. Things that at the beginning (of the season) where there were certain guys that probably, for different reasons, didn’t really want to be here anymore. And then there was obviously new guys that came in halfway through the season. There was hope when everybody arrived that we could finish strong, but it’s still been difficult to get the same group of players on the field game after game after game. And I think that’s going to be important for us moving forward.”

Toronto FC has been plagued by injuries this year. Midfielder Jonathan Osorio (neurological dysfunction) and centre back Doneil Henry (lower body) did not dress for TFC on Friday.

Friday’s match marked the return of former TFC great Alejandro Pozuelo, who played at BMO Field for the first time since being traded to Miami in July. Pozuelo, 31, wasn’t a major factor in the match and received a lukewarm reception from the crowd of 27,703 when he was substituted out of the game late. Of course, with TFC trailing 1-0 after playing a pretty even contest against Miami, the BMO Field faithful weren’t in the mood to be too magnanimous.

After the match ended, the Toronto FC players lingered on the field for a few minutes and tossed miniature balls into the stands. But all in all, it was pretty uneventful end of the home season.

Bradley substituted attackers Lorenzo Insigne and Jesus Jimenez out of the game with 18 minutes left to go. Insigne walked straight from the field into the locker room.

“Lorenzo early in the game felt something lower leg,” said Bradley. “I thought he might have to come out. At halftime he felt like he could keep going. I’m not sure he had the same push in the second half.”

The other big-money Italian TFC player, Federico Bernardeschi, created some good chances in the first half but didn’t do a lot in the second. The former Juventus man had scored in each of his first five home games with TFC, but that streak ended on Friday.

The Herons held an edge in possession (59%-41%) and fired five shots on goal to three by TFC.

The two sides battled to a 0-0 draw in the first half. TFC’s best chance early came in the 11th minute when Richie Laryea picked up a pass on the wing and right-footed just wide.

Bernardeschi set up Insigne with a great pass across the front of the goal for a good chance that was saved by Miami keeper Drake Callender in the 19th minute. Insigne reciprocated a few minutes later when he found Bernardeschi with a cross to the right side of the field and Bernardeschi dribbled into the centre and forced Callender to make another decent save. Shortly after, TFC keeper Quentin Westberg made a good save on Gregore Silva.

TFC centre back Chris Mavinga made a great defensive move to prevent star Miami striker Higuain from breaking in alone for a shot. With about 12 minutes left in the half, Callender dove to his left to save another left-footed attempt Bernardeschi. And then it was Westberg’s turn to make a big stop, this time on Pozuelo.

By far the best chance of the first half came with two minutes left when TFC midfielder Mark-Anthony Kaye fed Insigne a wonderful pass into the box and the Italian winger right-footed it just above the goal from close in. Insigne, obviously incensed about something, went after Silva after the half-time whistle went and was issued a needless yellow card.

The second half opened with Michael Bradley, who played a solid game, bringing down Pozuelo just outside the box, giving Miami a free kick. Jean Mota left-footed the free kick just wide.

Laryea picked up a yellow card in the second half (for an elbow) and will be suspended for Toronto’s final game of the season. That’s bad news on two fronts. With the World Cup coming up in November, Laryea needs all the game action he can get and now that’s been cut by one. His next match will now not be until Nov. 17, when Canada plays a friendly against Japan.

TFC had a good chance to jump ahead when Laryea set up forward Jesus Jimenez in front of the goal and the Spaniard right-footed it high.

Shortly after Insigne and Jimenez were substituted out of the game in the 72nd minute, Westberg had to make a huge save on Ariel Lassiter from inside the box, keeping the score 0-0.

With eight minutes left, Toronto centre back Shane O’Neill made a timely block in the box on Higuain.

Higuain’s goal came in the 86th minute when he picked up a pass just inside the box and stepped around O’Neill and easily left-footed a shot past Westberg. He has scored in each of The Herons’ last four games (five goals overall), a club record.

MOOR ON WAY OUT

Colorado Rapids centre back Drew Moor, who played for TFC between 2016-2019, and was a fan favourite, announced via Twitter on Friday that he is retiring after the current season after 18 years in MLS.

A Senate breakthrough on immigration might still be a long shot

Queen Camilla Is the Cover Star of 'Good Housekeeping' — and Kate Middleton Is Also Featured in the Issue!

Graphic: Thompson gets stitched up, has broken hand

Porsche up on DAX promotion; Puma shrugs off exclusion

After hit-and-run, B.C. woman in wheelchair claims ICBC is granting her the ‘bare minimum’

Alleged serial killer’s estranged wife says she is overwhelmed by survivor’s guilt: ‘Why did I get to survive’

Erin Leszkovics couldn’t hold back tears while reliving some of the pain and abuse she says she’s endured over the years. The estranged wife of an alleged serial killer is grappling with her emotions and says she is overcome with extreme guilt after hearing her ex is now charged ...


View more: Alleged serial killer’s estranged wife says she is overwhelmed by survivor’s guilt: ‘Why did I get to survive’

A black bear goes through garbage in this photo taken during by a B.C. Conservation Service officer responding to a call in Whistler in 2014. A Supreme Court of B.C. judge has ruled a $60,000 penalty levied against a Whistler woman for feeding bears was excessive. According to a ...

Jude Law, Cameron Diaz in “The Holiday”. Director Nancy Meyers has responded to rumours that a sequel to “The Holiday” is on its way. The beloved 2006 flick saw Kate Winslet’s Iris and Cameron Diaz’s Amanda swap houses. Winslet’s character ended up dating Jack Black’s Miles after they met ...

By Rod Nickel WINNIPEG, Manitoba (Reuters) – Fertilizer producer Mosaic Co said on Tuesday that it has temporarily curtailed potash production at its Colonsay, Saskatchewan, mine in Canada, citing slower-than-expected demand. Mosaic said in a statement that its inventories are adequate to meet demand in the short term. The company ...

Vancouver Aquatic Centre in Vancouver, B.C., June 27, 2022. Vancouver council approved a $730 million capital budget Tuesday for 2023, but put off a decision about the operating budget — which includes major items such as policing — until next year. The 2023 capital budget is the first step ...

After years of being in survival mode, a local bakery owner is closing up shop and calling for more to be done to support small businesses in Windsor. Gabby Jedlinski, the owner-operator and head baker of Bad Witch Bakery, said it was a painful decision to shut her doors, but between the pandemic, ...

2 Dividend Stocks That Could Lead a 2023 Rally

Extreme cold warnings issued for all of southern, central Manitoba

A bat infestation at a Nevada fire station is so bad, the department is abandoning the building

‘I don’t know how to stop Messi!’ - De Jong has no secret World Cup plan to help the Netherlands

Paralyzed Dog Rescued After Being Found on Train Tracks in Philadelphia: 'This Is Pure Evil'

Will Ferrell Joins His Son Onstage To Play His Iconic Cowbell

Opinion: Why Justice Alito's 'jokes' are so stunning

The Most Popular Shows On Netflix Right Now Besides 'Firefly Lane'

Veteran Iowa Player Announces He Will Be Transferring

Even with NFL's best record, Eagles fans have reason to dream over mock drafts

Langley, the township, is interested in breaking up with Langley, the city, on RCMP costs

Three-time champion Rachel Homan off to winning start at Masters

America can no longer remain silent about its antisemitism problem

On The Money — Will Biden’s rail deal backfire?