Several members of the Iranian men’s national soccer team posted social media messages in support of Hossein Mahini, a former teammate who was arrested on Thursday for expressing solidarity with the protests sweeping Iran.

Millions of Iranians have taken to streets in recent weeks to protest the death in police custody of Mahsa Amini, a 22-year-old woman who’d been arrested for allegedly wearing her headscarf too loosely. The nearly unprecedented wave of dissent against the Iranian regime, and in support of women’s rights, has prompted a swift crackdown by the country’s security forces. The response has resulted in the death of at least 83 people, activists told Reuters.

The crackdown has extended to soccer — in that Mahini, a World Cup veteran and longtime defender for Iran’s top club, Persepolis, was reportedly detained for publicly supporting the protests; but also in that the current national team, according to players, was living under strict orders to stay silent.

Most of the two dozen players slated to represent their nation at the 2022 World Cup in November stayed silent last week, as they gathered for their final training camp ahead of the tournament. They played two games as the Iranian soccer federation (IFF), under pressure from the government, restricted media access; and as two spectators, demonstrating peacefully, were ejected from one match by police; and as cities burned back home. 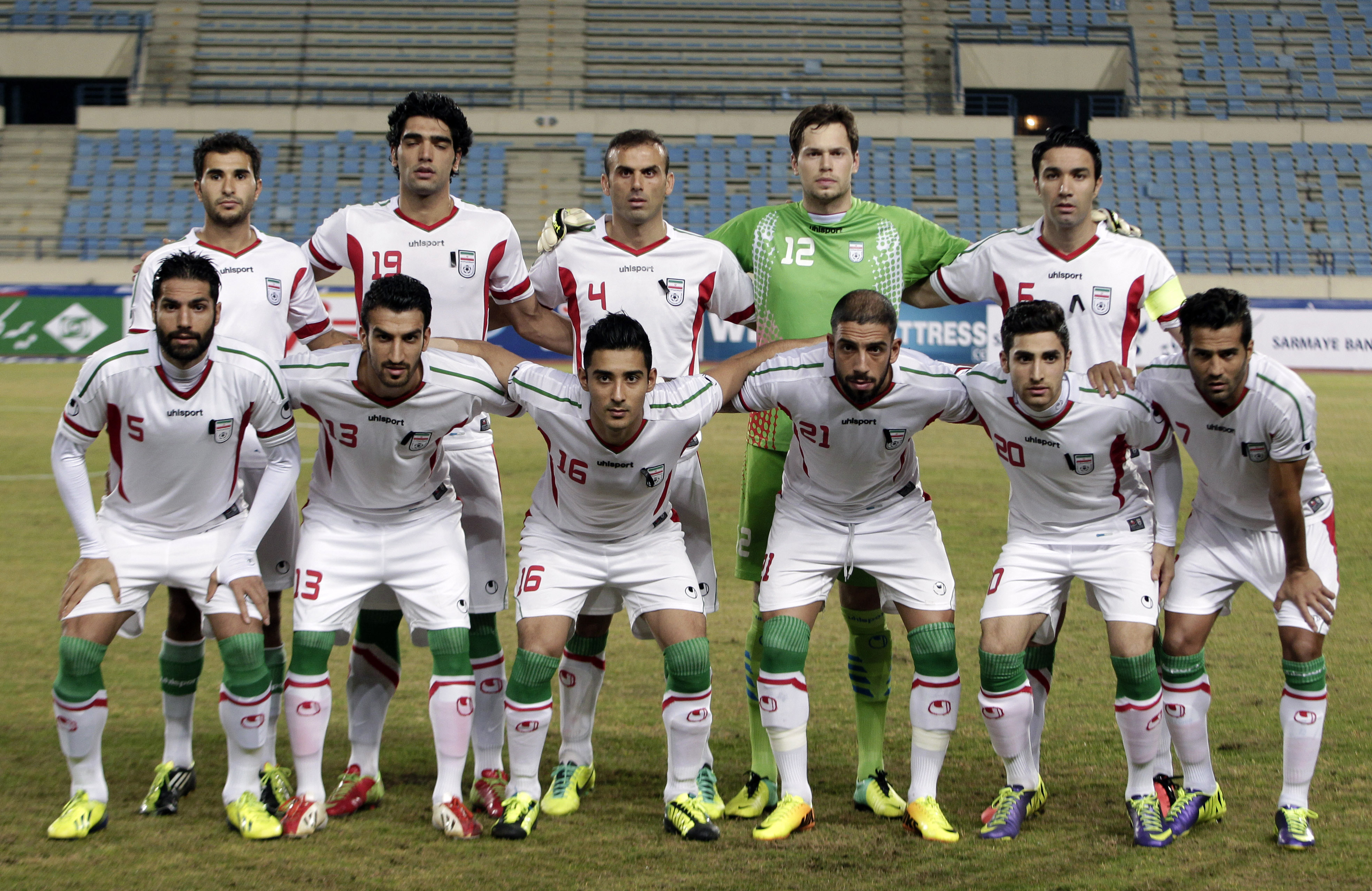 Sardar Azmoun, a star striker, broke the silence on Sunday in an Instagram post. “At worst, I’ll be dismissed from the national team; no problem,” he wrote in Farsi, according to rough translations. “I’d sacrifice that for one hair on the heads of Iranian women. This story will not be deleted. They can do whatever they want. Shame on you for killing so easily; long live Iranian women.”

Soon thereafter, the post was deleted. A few days later, an apology from Azmoun was posted in its place, and silence was restored. Several players blacked out their Instagram profile pictures. But some Iranians, including those risking their lives in the streets, criticized the players for not taking a risk and speaking up.

When the players wore black jackets during the national anthem before their Tuesday game, some Western media interpreted it as a silent statement in solidarity with protesters. But one Iranian activist, who runs the @OpenStadiums Twitter account, told Yahoo Sports that “it was just their normal jacket.” She didn’t interpret it as solidarity; the “national team is very much under surveillance of the [Iranian security] forces and they won’t let them specifically do that,” she said. None of the players have spoken about it.

When the training camp concluded, though, they began speaking. “The last few days in the national team camp have been really hard for us,” defender Morteza Pouraliganji wrote.

“Hello, now it’s time to write the things after finishing the camp that I really wanted to tell you,” Azmoun wrote on Wednesday, alongside a picture of the Iranian women’s volleyball team. “My heart really broke for Mahsa Amini,” he wrote as part of a message expressing solidarity with Iranian women.

Alireza Jahanbakhsh, another star forward, posted a black square and wrote, in part, according to an Instagram translation: “Due to camp conditions and rules regarding avoiding cyberspace, we were not allowed to operate. We are the soldiers of [the Iranian] people and we will always stand by our people. … It is not too much to ask for their simplest human rights. These people should be treated with more dignity and respect.”

Midfielder Saman Ghoddos, who was born in Sweden and now plays in England, wrote in Farsi and English: “As an Iranian who wasn’t raised in Iran, I am thrilled and suprised [sic] by the courage of the women of my country. These kind and brave people deserve the best life. And to have the right to all the social services in modern world. In the protesting times, police have responsibility to protect them especially women and kids and put them under their protection. These people haven’t committed anything bad. They just want their human rights which they want to see happen. Long live my dear Iran and its amazing people.”

In a separate caption, Ghoddos wrote: “Rest in peace to everyone who lost their lives fighting for freedom. #MahsaAmini.”

The biggest wave of social media posts, however, came Friday after news surfaced that Mahini, who played 23 games for the national team from 2011-17, had been arrested for “promot[ing] disorder and chaos,” according to Iranian state media. His house had also reportedly been raided. More than a dozen current national team players posted pictures of Mahini, 36, to their Instagram stories.

“Now footballers see how the actual situation [is],” the OpenStadiums activist, who protects her identity to avoid retribution from Iranian authorities, told Yahoo Sports.

Many of the posts, though, have been measured, and have opened the players up to continued criticism. Alongside a soccer picture on Wednesday, two weeks after Amini’s death, goalkeeper Alireza Beiranvand wrote, vaguely: “The voice of the masses is the voice of God.” One commenter asked him: “Did you wake up from sleep? How much is the World Cup worth to you? More than the lives of our own people?” 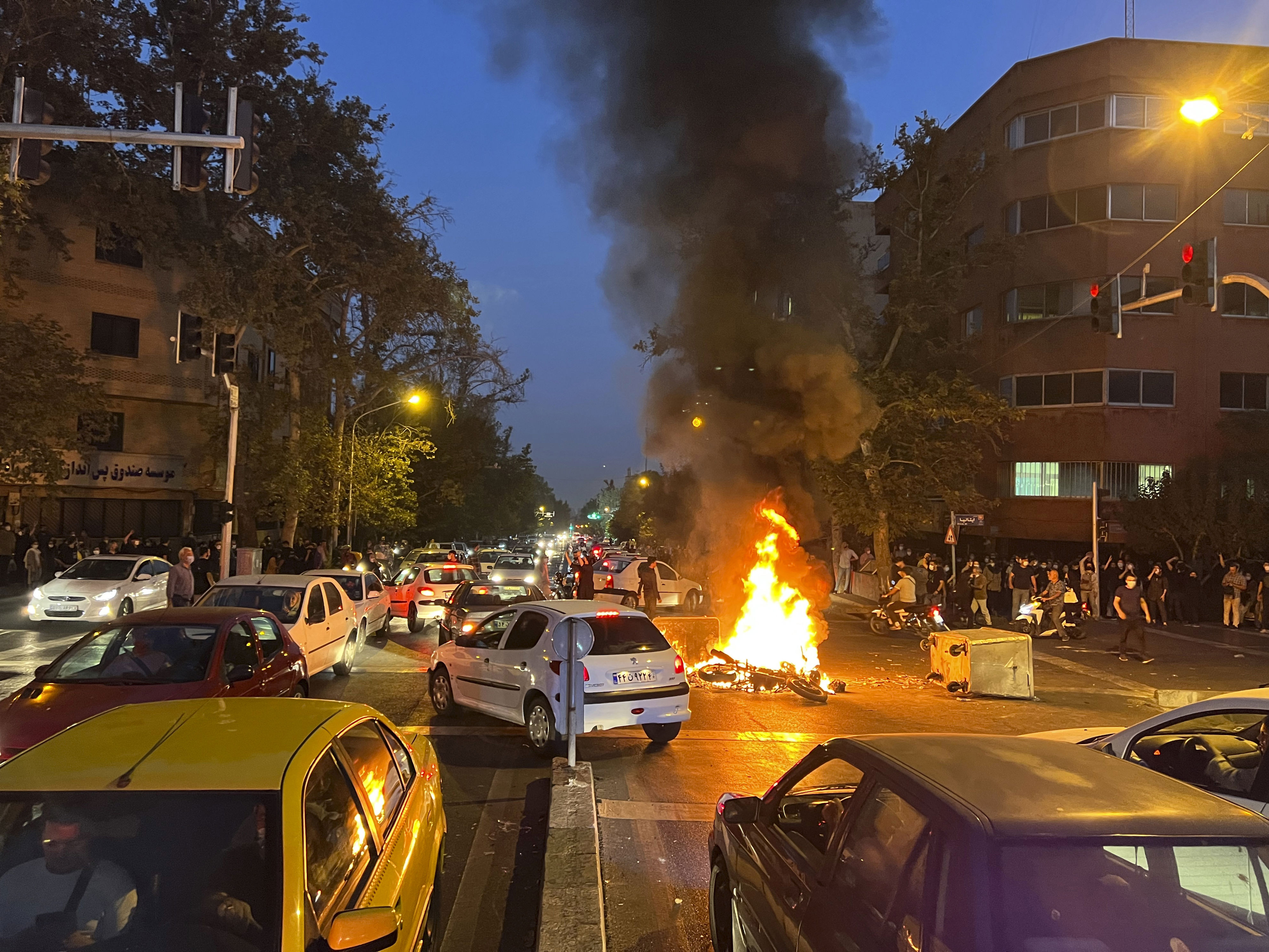 In this Sept. 19 photo taken by an individual not employed by the Associated Press and obtained by the AP outside Iran, a police motorcycle burns during a protest over the death of a young woman who had been detained for violating the country’s conservative dress code, in downtown Tehran. (AP Photo)

Multiple players have tried to frame their national team endeavors as representative of the Iranian people. To many, they are inextricably linked to the government.

“The Iranian [soccer federation], run by ex-commanders of the Islamic Revolutionary Guard Corps, is an important ambassador of the Islamic Republic and is acting in line with the repressive regime,” OpenStadiums wrote in a Friday open letter. “We do not believe this team represents us or our values as Iranian citizens any longer.”

That letter, addressed to FIFA president Gianni Infantino, called on FIFA to expel Iran from the 2022 World Cup. It cited two FIFA statutes, one of which claims the global soccer governing body is “committed to respecting all internationally recognized human rights and shall strive to promote the protection of these rights.”

The other states: “FIFA remains neutral in matters of politics and religion. Exceptions may be made with regard to matters affected by FIFA’s statutory objectives.”

FIFA did not immediately respond to a request for comment Friday morning. Iran is scheduled to open its World Cup campaign on Nov. 21 against England, and conclude Group B play on Nov. 29 against the United States.

Mahini’s arrest is not the first time the Iranian regime has punished athletes for opposing it. Most infamously, wrestler Navid Afkari was sentenced to death and executed in 2020. He’d been accused, without proof, of killing a security guard during anti-government protests in 2018, and allegedly tortured into a confession.

The national soccer team also has a history of activism, though much of it has been suppressed. In 2009, several players wore green wristbands during a World Cup qualifier in apparent support of an opposition presidential candidate who was disputing the results of an election. They were subsequently “retired” from the national team, according to reports at the time, though a few later returned.

One of them, Ali Karimi, who played for Bayern Munich during his 18-year career, has been a prominent and vocal supporter of the current protests, and critic of the regime. State-affiliated media have called for his arrest.

Voria Ghafouri, a veteran defender who played at the 2019 Asian Cup, has been a frequent social critic. He was summoned by authorities in 2019 after he criticized Iran’s foreign policy, and has not played for the national team since.

REVEALED: Woke Manhattan DA Alvin Bragg has downgraded over HALF of felony cases to misdemeanors as criminals are free to roam streets of the Big Apple

How to use QuickTime Player in macOS Ventura

Cyber Monday deal: get this 16-inch MacBook Pro for just $1,999 from Amazon

A $1,000 Investment In Apple Just After Thanksgiving Could Be Worth This Much By The End Of The Year

Apple revolutionised smartwatch. Then came the budget wave and more—AmazFit, Fitbit to Samsung

Save up to $2,000 with Cyber Monday deals. AppleInsider may earn an affiliate commission on purchases made through links on our site. Cyber Monday is officially underway and hundreds of deals are in effect, often with limited availability. Shop the steepest discounts on MacBooks, desktop Macs, AirPods, iPads, Apple Watch, ...

(Bloomberg) — Turmoil at Apple Inc.’s key manufacturing hub of Zhengzhou is likely to result in a production shortfall of close to 6 million iPhone Pro units this year, according to a person familiar with assembly operations. Most Read from Bloomberg The situation remains fluid at the plant and the ...

Save on Roborock robot vacuums this Cyber Monday. AppleInsider may earn an affiliate commission on purchases made through links on our site. Roborock’s continuing the weekend’s sales with its Cyber Monday deals, with steep discounts available across its robot vacuum cleaner range. The holiday weekend sales are continuing, with Cyber ...

This week’s new Apple Arcade release – alongside some updates to Air Twister and Jetpack Joyide 2 as well – is Spongebob Solitairepants, which is pretty much exactly what it sounds like. This is a simple solitaire simulation game that features the aesthetics and characters of the legendary cartoon ...

The best Live Activities in iOS 16.1

The “i” Icon on an Apple Watch: What It Is and How to Use It

Today in Apple history: Maps manager is navigated out of Apple

How to evolve Applin into Flapple in Pokémon Scarlet & Violet

How to evolve Applin into Appletun in Pokémon Scarlet & Violet

The Apple Watch Ultra and Galaxy Watch 5 are tough. But the Garmin Fenix 7 is tougher

Apple Watch Ultra has been tortured to check its durability