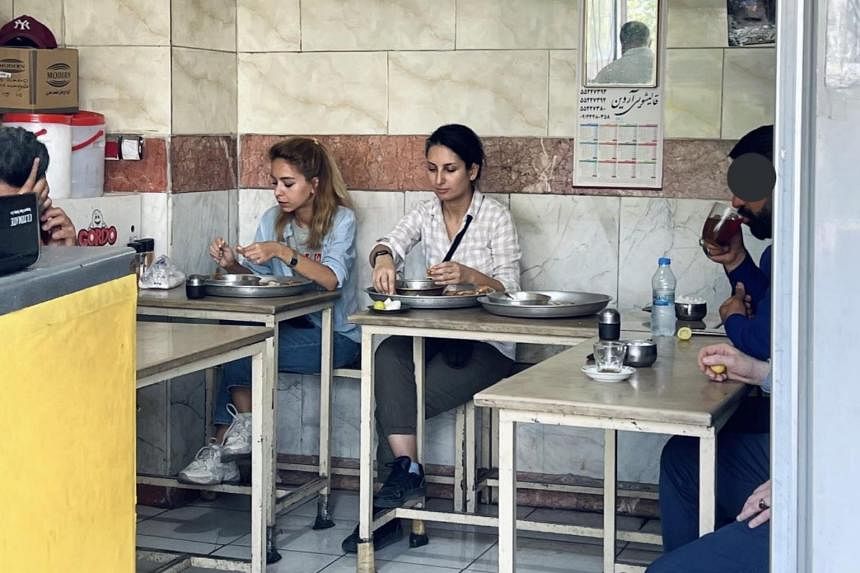 PARIS – Iran has arrested a woman who was shown eating out without a headscarf in an image that went viral on social media during the protests over the death of Mahsa Amini, her sister said on Friday.

The picture showed Donya Rad sitting in a traditional Teheran restaurant apparently eating breakfast, in the company of a female friend who is also without a headscarf.

The image was widely shared on social media by users, who applauded the two women for their civil disobedience in the face of the Islamic republic’s strict dress code for women.

Amini died earlier this month following her arrest by the country’s strict morality police who enforce the rules for the obligatory hijab.

“Yesterday after this photo was published, the security agencies contacted my sister Donya Rad and asked her to give some explanations,” her sister Dina wrote on Twitter.

“Today, after going where she was told, she was arrested. After a few hours of silence, Donya told me in a short call that she was transferred to ward 209 of Evin prison,” she said, referring to a notorious wing of the Teheran jail which is reputedly run by the intelligence ministry.

“Our family is very concerned about her wellbeing,” she added.

Persian media outside Iran have over the last days pointed to growing images of civil disobedience, with women in Iran sharing images of themselves walking, shopping or in cafes without headscarves.

“They just went to get breakfast without headscarves. They were arrested. This is how brutal/sick the hijab policy is in Iran,” commented prominent US-based campaigner and journalist Omid Memarian on Twitter.

Some on social media compared Rad’s actions to those of Rosa Parks, the American black civil rights activist who resisted segregation on buses, putting together images of Parks on a bus with Rad in a cafe.

Prominent songwriter and poet Mona Borzouei was also arrested, activists said, after she posted a video of herself reading a poem declaring: “We will take this homeland back from your hands.”

Activists say Iran is in the throes of one of its most ferocious crackdowns in years to suppress the protests that erupted in the wake of Amini’s death, with some two dozen journalists rounded up as well as activists and cultural figures.

Security forces also arrested singer Shervin Hajipour, whose song “Baraye” (“For”) made up of tweets about the protests went viral on Instagram, the rights group Article 19 and Persian-language media based outside Iran said.

His song, which racked up millions of views on Instagram and prompted many to comment that it moved them to tears, has now been removed from his account. AFP

The US embassy in Beijing is urging American citizens in China to stock up on daily necessities in case of quarantines and lockdowns amid protests in major cities against the nation’s zero-Covid policy as cases soar and controls tighten. In a statement directed at American citizens on Monday, the ...


View more: US embassy in China urges Americans to stock up on daily necessities amid Covid surge and protests

As his father drove from California toward Nevada, breathlessly repeating prayers while wearing a football helmet and steering erratically across the freeway, a 12-year-old boy made an emergency phone call from the passenger seat, telling dispatchers he was concerned about his safety. The call from the boy authorities are ...

This time next year, two West Kelowna, B.C., women will be basking in the afterglow of what for most will only ever be a dream. Donna and Danielle Scheven have been invited to Paris Fashion Week 2023, where they will showcase their jewelry line, Carolily Finery. It’s a significant feat ...


View more: Paris Fashion Week 2023 to get an Okanagan addition

Indiana University women’s basketball coach Teri Moren ripped the “disappointing” environment of the Las Vegas Invitational tournament over the weekend, which took place inside a hotel ballroom at The Mirage Resort and Casino. In now-photos on social media, a game between Indiana and Auburn was played in a fully-carpeted 90,000 ...

The sex attacker busted for raping two women at the same Bronx hotel threatened to kill one with a knife and the other with a hammer before stealing money using an app on their smartphones, according to new court papers. Dashawn Williams, who was once busted in the rape of ...