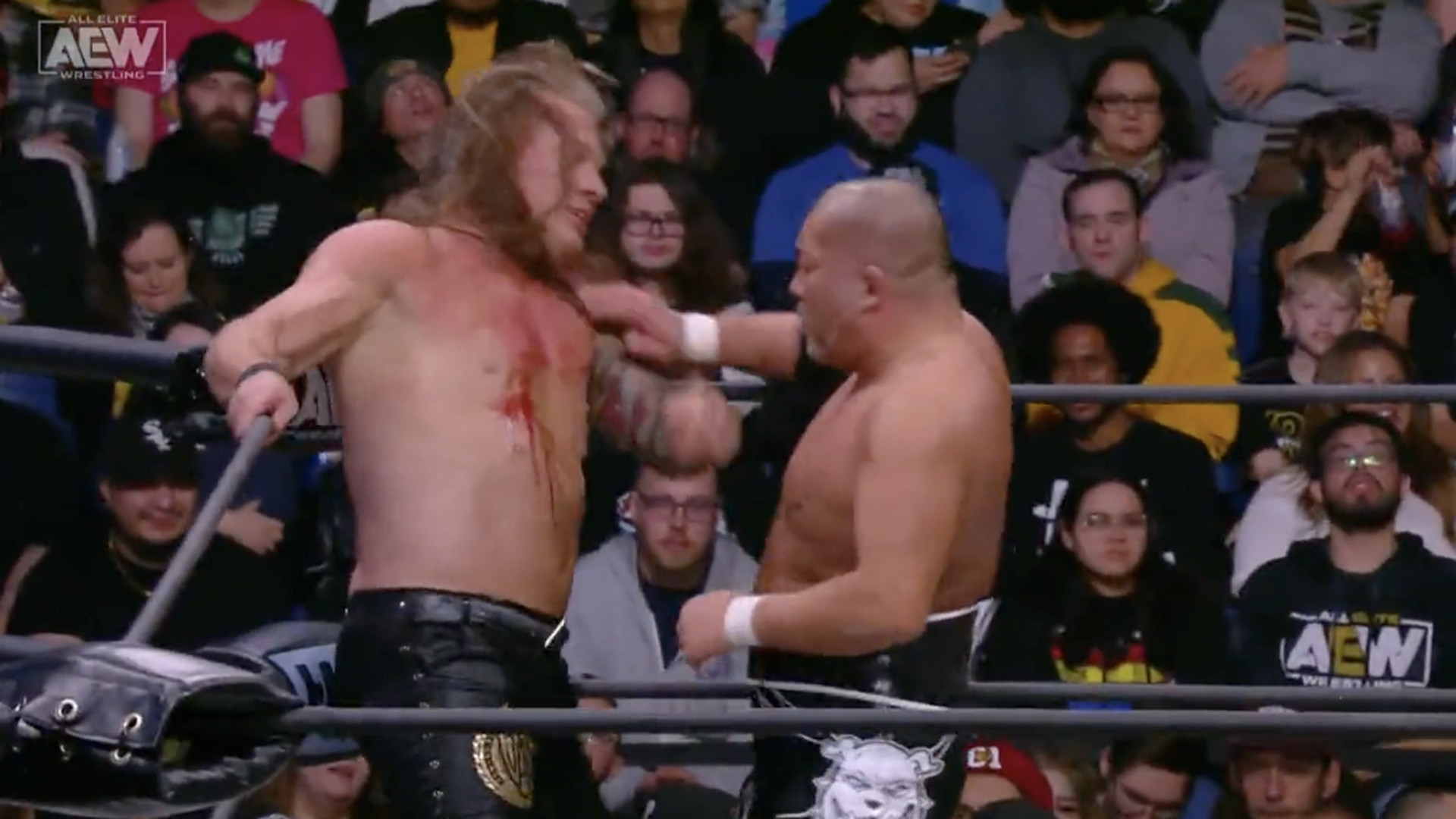 Chris Jericho isn’t taking any breaks in his quest to destroy the legacy of Ring of Honor and remold the promotion in his image. Just days after retaining his ROH World championship in a 4Way at Full Gear, he defended the Ocho against former ROH Television champ Tomohiro Ishii on the Nov. 23 Dynamite.

A date with the man known as the Stone Pitbull is never easy, either. That was very clear when an exchange of chops left Jericho’s chest not only red, but bleeding!

Ishii’s strikes have opened up the chest of the champ @IAmJericho! An absolute slugfest so far

This was the kind of brawl you get when you put a New Japan veteran Strong Style practitioner in a main event with a 52 year old having a career rejuvenating run. It was so hard hitting that moves like this…

What a devastating DDT right on to the apron by #TheOcho @IAmJericho!

… left Ishii struggling to remain on his feet at time during the match’s final act. But it didn’t prevent them from exchanging nearfalls down the stretch. Both men hit Codebreakers, and a Judas Effect was countered with a headbutt as the two combatants kept referee Aubrey Edwards bust. The Walls of Jericho couldn’t put Big Tom away, so the champ stood up to make it a Liontamer. Ishii gave Jericho the finger, but was eventually forced to tap out.

#AndStill! #ROH World Champion @IAmJericho retains the title after an absolutely physical battle against #TomohiroIshii, but former #ROH World Champ has a message for #TheOcho!

What a night of action it has been on #AEWDynamite LIVE on TBS! Happy Thanksgiving to everyone! pic.twitter.com/g8xZWgVVkZ

The announce crew was pointing out how Jericho hasn’t cheated to win his last two matches when he seemed to come for ROH play-by-play man Ian Ricabonni. But before he could get his hands on him, Claudio Castagnoli appeared. The man who took the fall at Full Gear sent Jericho crumpling to the stage with a stiff slap.

Did he just book himself a title match at Final Battle on Dec. 10?

Get complete results and coverage of everything from the Full Gear fallout of Dynamite here.

Meghan Trainor's Made You Look inspiration

Mysterious Tendrils Inside The Brain May Control Our Perception of Time

Millions of 'Silent Synapses' Could Be The Key to Lifelong Learning

Millions of ‘Silent Synapses’ Could Be The Key to Lifelong Learning Newborns need to store vast amounts of new information quickly as they learn to navigate the world. Silent synapses – the immature connections between neurons that have no neurotransmitter activity yet – are thought to be the hardware ...


View more: Millions of 'Silent Synapses' Could Be The Key to Lifelong Learning

Manchester United are serious about signings and building a new team under Erik ten Hag, says transfer reporter Dean Jones. The Red Devils were busy in the last window, bringing in the likes of Antony and Casemiro, but it does not look like Ten Hag is going to stop there. ...

The family villa of Elnaz Rekabi – an Iranian climber who competed abroad with her hair uncovered – has reportedly been demolished. Ms Rekabi, 33, broke Iran’s mandatory dress code at the contest in South Korea – but later said her headscarf had fallen off “inadvertently”. The BBC was told ...

Evo Morales criticizes the «traitors» led by Arce who have agreed to «governability in exchange for impunity».

Archive – Evo Morales, former president of Bolivia – EL UNIVERSAL / ZUMA PRESS / CONTACTOPHOTO The leader of the Bolivian ruling party, Movimiento Al Socialismo (MAS), Evo Morales, has criticized the agreement reached between the Government and the opposition and has particularly charged against the “traitors” led by ...


View more: Evo Morales criticizes the «traitors» led by Arce who have agreed to «governability in exchange for impunity».

What are TIPS? Investing Explained

In this series, we bust the jargon and explain a popular investing term or theme. Here it’s TIPS. Tips  I suspect that this has nothing to do with the charge for service in a restaurant… Correct. The acronym ‘Tips’ stands for Treasury inflation-protected securities, a bond issued by the US ...

Every World Cup 2022 referee, as first all-female line-up makes history in Germany vs Costa Rica – GETTY IMAGES Stephanie Frappart made history as she led the first all-female official line-up when Germany took on Costa Rica on Thursday. Frappart was joined by Neuza Back and Karen Diaz Medina ...

LIVE – Updated at 15:46 Netherlands vs USA – LIVE! Louis van Gaal will lead the Netherlands into the knockout phases of the World Cup for the second time in his career today as the Oranje bid for a place in the final eight against the USA. Semi-finalists in 2014, ...

Parker: There’s only one way Chisora could beat Fury

A couple saw packages discarded on the side of a road. They delivered the parcels themselves.

Will the United States automatically qualify for the 2026 World Cup?

TV-Loving Cat Keeps Calling Mom Out for Not Paying Attention

Lando Norris v Daniel Ricciardo: One can still make good excuses for the team, the other ran out

Paralympian Ryley Batt hopes to inspire people with and without disabilities

Inspired by basketball star Kobe Bryant, Kat Tan is out to change the game for good

World Cup team of the round: Group stage round 3

Senator Chris Murphy: ‘victory after victory’ is coming for US gun control

What channel is USA vs. Netherlands on? How to watch 2022 World Cup Round of 16 game on TV from Qatar

Thousands protest in South Korea in support of truckers, government orders them back to work

WA grind towards lead in Shield at Gabba

NSW in control vs Vics amid Shield drama

'I'll wear this dress all summer': 23 things the Mamamia team shopped this month.

Woman who broke back, pelvis and legs after falling 40ft walks again

World Cup 2022: One man has proved how the ball stayed in during Spain vs Japan

Iran denounces to Borrell the attacks of «radical politicians» hiding «behind the European Union».

Where to watch Socceroos vs Argentina in Australia? Darling Harbour among live sites for World Cup match