Noel Acciari and Colton Parayko scored 13 seconds apart in the third period and the St. Louis Blues defeated the Islanders 7-4 on Tuesday night.

Josh Leivo had a goal and an assist and Thomas Greiss made 36 saves and the Blues snapped a five-game skid in the finale of a three-game northeastern road trip. Ivan Barbashev, Ryan O’Reilly and Robert Thomas also scored for St. Louis. 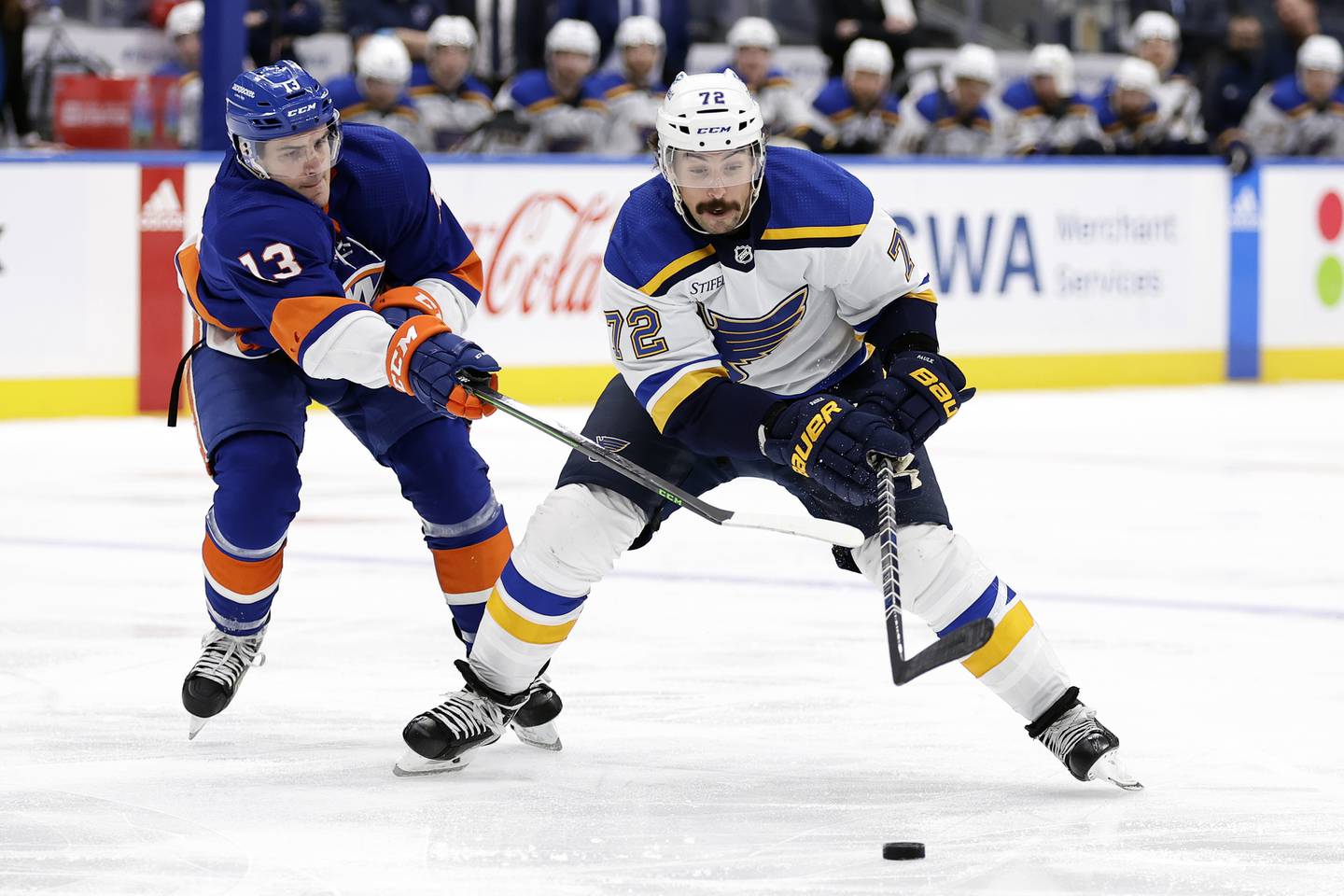 Parise, Fasching and Pageau scored within a 9:28 stretch in the third period to trim their deficit to one goal. But Thomas and Acciari each scored an empty-net goal to seal the victory in favor of St. Louis.

Barbashev gave the Blues a 2-1 lead at 3:51 of the second period when he buried a feed from William Bitten on an odd-man rush opportunity. Islanders defenseman Scott Mayfield failed to keep the puck in the offensive zone after a strange bounce off the boards and the Blues capitalized.

O’Reilly extended St. Louis’ lead to two goals at 14:58 of the second period. The Blues captain fired a sharp-angled shot and then beat Islanders defenseman Alexander Romanov to the rebound before pushing the puck past Sorokin.

Leivo opened the scoring with a nifty wrist shot that rang off the post and in at 17:13 of the first period. The Islanders fell to 5-9 this season when surrendering the first goal.

Dobson’s top-shelf one-timer evened the score at 1-all 39 seconds after Leivo notched his first of the season. Mathew Barzal showed off his great vision with a beautiful backhand pass to set up Dobson in the slot.

Greiss preserved the Blues’ two-goal edge early in the third period with a critical stop on Parise off a pass from Jean-Gabriel Pageau. The German goaltender spent five seasons with the Islanders and helped the franchise end a 23-year drought without a playoff series victory when he guided the team past the Florida Panthers in the first round of the 2016 Stanley Cup Playoffs.

Pavel Buchnevich (lower-body) and Torey Krug (upper-body) missed the game against the Islanders after sustaining injuries in the Blues’ 6-4 loss against the New York Rangers on Monday evening.

Islanders defenseman Adam Pelech left the game in the third period and did not return.

OFFENSE FROM THE BLUE LINE

Blues defensemen have accounted for over 15% of the team’s goals this season, and St. Louis is 8-1 when a defenseman scores a goal. In addition, Blues defenders have contributed five power-play goals this season, tied for the most in the NHL with the Nashville Predators and Florida Panthers.

The Islanders opponent is on the back end of a back-to-back for all three games on this homestand. Nashville played at New Jersey, while both Chicago and St. Louis visited UBS the day after playing at Madison Square Garden. It is the first time in Islanders history that a rested Islanders team has hosted a team that has played at another metro-area opponent for three straight games (per Islanders statistician Eric Hornick).