Como 1907 has turned heads by attracting big names to their cause this summer Cesc Fabregas joined the playing squad, while Thierry Henry invested in the clubThe Serie B side are aiming for a spot in Serie A after years of mismanagement Bought by the Djarum Group in 2019, Dennis Wise has been installed as CEOThey are keen on helping the community, launching their Como4Como scheme Click here for all the latest World Cup 2022 news and updates

As the European holiday destination of choice for Hollywood royalty, including George Clooney and Ben Affleck to name but a few, Lake Como has never had any problems in enticing global stars to its shores.

The same cannot be said for its football team. A modest outfit that has spent most of its existence rotating between stints in Serie B and C, the side occupying the Stadio Giuseppe Sinigaglia on the banks of the water have historically been anything but glitz and glamour.

Beyond World Cup winners Marco Tardelli and Pietro Vierchowod gracing the club in the seventies, there are few names to stir the memory among Como 1907’s alumni. A best ever finish of sixth in Serie A in 1950 is the height of their achievements. Ambition has been tempered by experience. Two bankruptcies in the space of two decades will do that to a club. 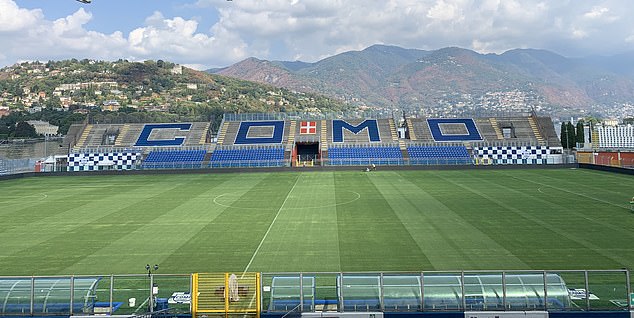 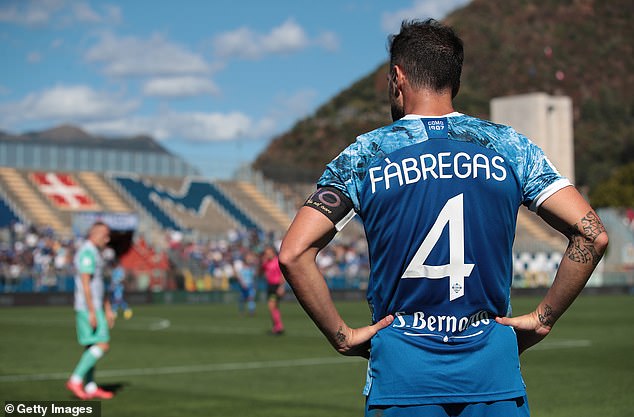 The project, both on and off the pitch, has attracted top professionals, such as Cesc Fabregas

That is no longer the case. The past summer has seen former Arsenal and Chelsea icon Cesc Fabregas join the club, which was bought in 2019 by the Darjum Group, an Indonesian tobacco conglomerate.

Thierry Henry has invested, too, and is now a figure in the boardroom. Aspiration has arrived in abundance.

‘More often than not people talk about Como because of the town, and how magnificent it is, how great it is – the lake, the houses,’ Henry tells Sportsmail.

‘I know for a fact the likes of Benoit Cauet finished his career here, Tardelli played here. It used to be a good club that used to develop a lot of youngsters.’

The hope is that it can be that again. The development of the club, both on and off the pitch, has been placed in the hands of Dennis Wise. The former Chelsea captain has returned to football after his self-imposed hiatus to take up the post of CEO.

His work has already helped deliver a new training ground, on which the club spent €1million. They are looking to acquire a further two-acre plot in order to house the men’s, women’s and academy set ups all at the same base. 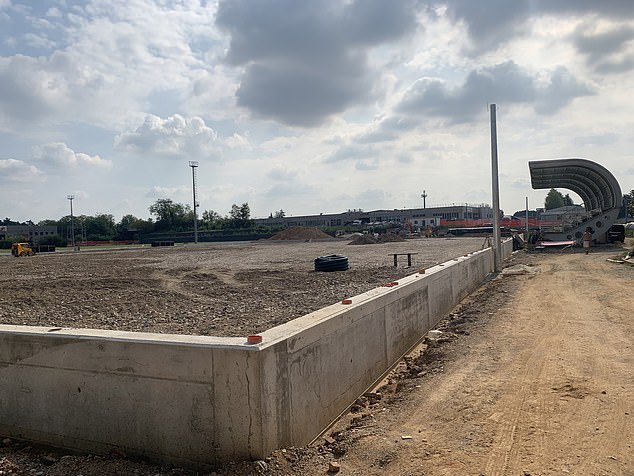 There is considerable effort being dedicated to improving the stadium, too. Negotiations are ongoing on securing a 99-year lease for their dilapidated home, which currently accommodates fewer than 5,000 fans at each game owing to safety measures.

Securing it would allow for some much-needed renovations, but the owners are eyeing more than a lick of paint. If the preferred plans are approved, there is talk of a host-city bid for Euro 2032, should Italy’s proposal to host the tournament succeed.

‘There’s a lot of opportunities here that can really give a buzz to the community and give jobs to the people,’ says Wise. ‘I think that’s an important part of what we want to try and do. The local companies, we want to try and involve them.’

Nothing illustrates this more than the club’s Como4Como scheme.

While Henry was being unveiled to the press last month, Como took the chance to announce their flagship community initiative. It was a pledge that by 2025, all resources used by the club, from the grass on the pitch to the food sold in the stands, will be locally sourced. If it’s not available, they’ll work with the community to produce it.

The scheme is the latest gesture from the club to a group that has come to distrust those in control of the city’s team.

‘They had two bankruptcies before this group went and bought it. Nobody really trusted people that bought this football club,’ says Wise of a club that counts Michael Essien’s wife among its failed ownerships. 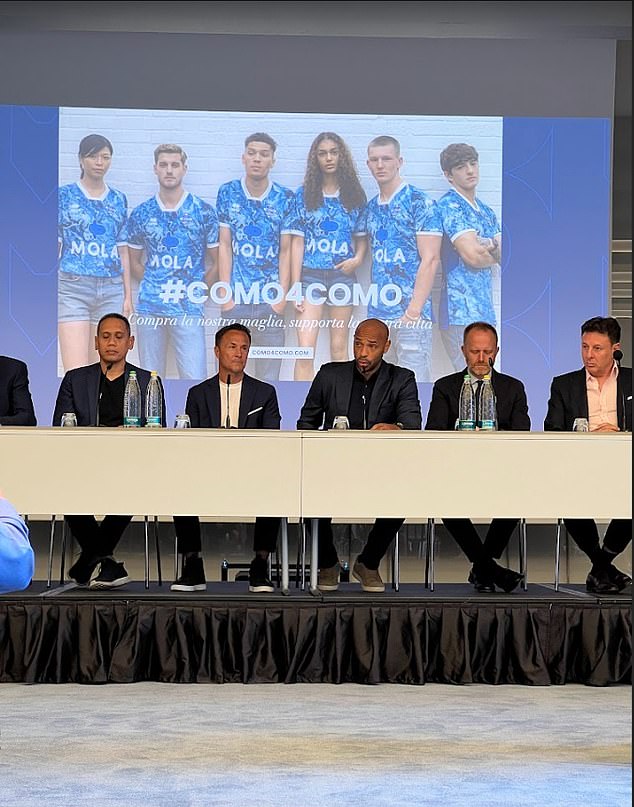 Other programmes are already bearing fruit. The club have pledged profits from shirt sales to regional causes for the next two seasons. So far, pre-sales have sailed past the 4,000 mark.

The strips are sponsored by Djarum’s streaming service subsidiary – Mola TV. As in the UK, there is a ban on advertising and sponsorship for tobacco companies in Italy, but nothing preventing them from owning clubs.

In any case their business is multi-faceted these days. The majority of its wealth owes to their ownership of Indonesia’s largest private bank – Bank Central Asia.

There were donations to local hospitals during the Covid pandemic totalling €125,000. Another €100,000 has since been provided for other causes. Both the Henry and Fabregas have cited Como’s community focus as a major factor in their own involvement.

The fact that the city’s mayor Alessandro Rapinese was part of the panel introducing the Frenchman shows how closely bonds between club and community are being formed. 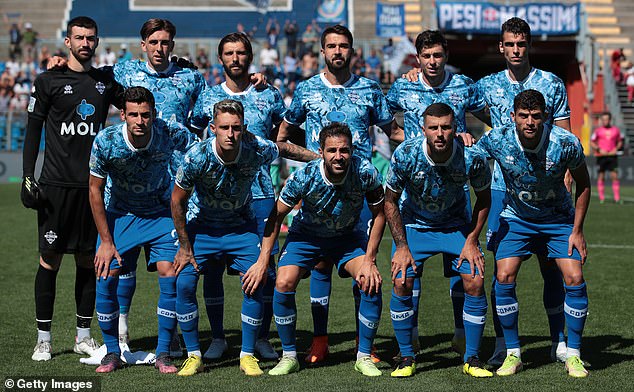 Incredible really then, that the club was purchased almost by accident. Initially, the owners had sought to own a European club capable of blooding the best young players from Indonesia. Their promotion to Serie C as the takeover went through proved problematic, with Italian rules stating non-EU players cannot be bought by clubs in the second and third tier.

That changes in Serie A, and so promotion would provide an added benefit of finally realising one of the ownership group’s visions.

Not that the presence of Fabregas et al guarantees results. The goal of returning to the top flight for the first time since 2003 is far from assured, as their latest board member is at pains to state.

‘Have you seen the teams that just came down?’ Henry says. ‘People don’t know but it’s very tough to go up to Serie A.

‘Do you know how many teams want to go back to Serie A? Some are well-equipped, some aren’t so well equipped. Whatever it is, you never know who is going to be successful.’

As Wise points out, though, there is more than one measure of success for Como.

‘People now know it’s not just a lake and that’s what I wanted to do,’ he says. ‘In time more people will know that this is a football club. And it’s not just a place where George Clooney goes.’ 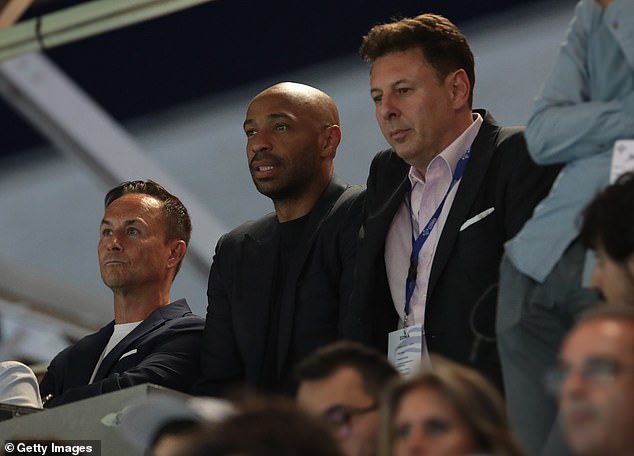 Bones found in a Georgia landfill were the remains of missing toddler Quinton Simon, the FBI confirmed Monday. The agency said it was able to confirm the 20-month-old’s remains through DNA analysis and has now stopped the painstaking search of the Superior Landfill in Savannah, Georgia. Little Quinton’s mother, Leilani ...

The Beatles, 1962 Prior to Ringo Starr joining The Beatles, the group consisted of (l-r) George Harrison, John Lennon, Paul McCartney, and original drummer Pete Best, all here in a club prior to signing their first recording contract in Liverpool, England in 1962. Best was cut from the group and Starr ...


View more: The Beatles: The lives and musical careers of John, Paul, George and Ringo

Quinton Simon was reported missing last month and whose mother was arrested last week on charges including murderChatham County police said on November 21 that they had arrested Leilani Simon, 22, on charges of malice murder, among others The FBI used DNA analysis to confirm that the bones belonged to 20-month-oldThe remains that were determined to be Quinton's were found in a landfill on November 18

The Atlanta division of the FBI has identified remains found in a Georgia landfill as those of toddler Quinton Simon, bringing an end to the weeks-long search for the child that garnered national attention. Bones found in the Superior Landfill in Savannah were found to belong to the 20-month-old through ...

Princess Andre showed off just how much she looks like the other females in her family as she shared a sweet family snap on Instagram on Monday. The daughter of Katie Price and Peter Andre took to the social media site to share a picture of her self hugging her ...