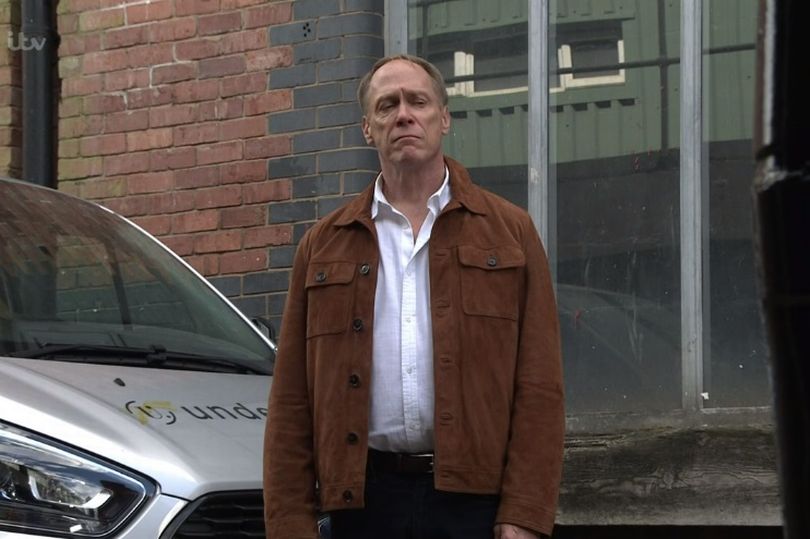 Stephen returned to the scene of the crime in Corrie

Coronation Street fans think they know how killer Stephen Reid will be caught out.

The evil character, played by Todd Boyce, has been up to no good for weeks as he plotted to get his hands on all of Audrey Platt’s money, unbeknown to her family. However, Leo Thompkins found out about the cunning plan and decided to confront the businessman.

While Leo was supposed to be taking a trip to Canada he ended up falling to his death instead as Stephen launched him off a balcony into a rubbish bin underneath. When Stephen approached, he thought he had knocked Leo out and was horrified to see his dead body in amongst the bin bags.

Panicked, Stephen left the body as he went out for dinner with his family. He later returned to move Leo’s remains but it was unclear what he did with the body next.

Tonight’s episode saw Stephen return to the scene of the crime once more – where he found Leo’s mobile phone with a number of missed calls on it. He pocketed the phone, which fans thought was a terrible move on his part.

Taking to Twitter they shared their theories for how they thought he would end up facing justice. Oli said: “#Corrie Stephen should have left the phone there – police can track its movements.”

David said: “Murder on your own doorstep is never a good idea. Somebody will have seen Stephen drive off in the Underworld wagon, mark my words.” Meanwhile, another user said: “#Corrie Stephen putting Leo’s phone in his pocket is not a good idea.”


View more: Next major COVID variant IS poised to be more deadly, doctors warn after studying patient who harbored Omicron for six months

BBC Breakfast presenter Sally Nugent interrupted a report from Qatar to ask about an odd thing she had spotted in the background of the live video interview. During an interview with a group of UK fans in Qatar ahead of the England vs Wales game set to take place tomorrow ...

It’s almost 40 year since Redditch was blessed with world famous artist Eduardo Paolozzi’s mosaics in its new Kingfisher Shopping Centre. Now an anniversary survey to find out how local residents feel about the iconic artwork has unearthed some surprising results. It’s clear there’s a lot of love across the ...

SHOPPING: Products featured in this Mail Best article are independently selected by our shopping writers. If you make a purchase using links on this page, DailyMail.com will earn an affiliate commission. If you’ve left your holiday sales shopping until the last minute then we have some good news. You are ...


View more: Cyber Monday 2022 is almost over! Here are the best last-minute deals to shop with savings of up to $350 on Lenovo gaming tech plus great deals on headphones, clothing and more


View more: Video: Argentina head coach Lionel Scaloni audaciously insists even Mexico fans ENJOYED watching Lionel Messi score against them in their 2-0 World Cup defeat that leaves them on the brink of elimination

Michael Caulfield has enjoyed a close bond with Gareth Southgate since 2006Southgate hired the sport psychologist when he became Middlesbrough bossThey have remained in frequent contact in the 16 years which have followedCaulfield regards Southgate as a fearless leader despite his 'nice guy' imageHe is adamant that the England boss' top priorities are 'integrity' and his teamSouthgate will not pay much attention to criticism from outside, says CaulfieldHowever, Caulfield believes he may leave his position after this year's World Cup Click here for the latest World Cup 2022 news, fixtures, live action and results


View more: No more Mr Nice Guy! Don't buy into Gareth Southgate's fluffy public image, says trusted sport psychologist and friend Michael Caulfield... who brands the England boss a 'FIERCE and RUTHLESS competitor' - but admits he could walk away after the World Cup

Fake Neymar strikes again: Impersonator who tricked FOX Sports into believing he was the real deal is spotted in the stands taking selfies with fans during Brazil's win over Switzerland (while the player himself watched on TV!)

Video: Lava begins to flow out of Mauna Loa as it erupts on Hawaii's Big Island for first time in 38 years: Experts warn of 'serious' situation if magma from world's largest active volcano seeps into rift zones

Man in critical condition after being shot by police

Huge clouds of smoke after ‘explosion’ in London

The 'greatest mafia movie ever made'... that never actually was: Inside bizarre plot of FAKE Martin Scorsese flick Goncharov - as it amasses a HUGE online fanbase despite being totally made up by internet users

Video: The 'greatest mafia movie ever made'... that never actually was: Inside bizarre plot of FAKE Martin Scorsese flick Goncharov - as it amasses a HUGE online fanbase despite being totally made up by internet users

'£10,000 for an ear infection': Ex on the Beach star Chloe Goodman joins host of pet owners hitting out at 'greedy' vets after she was charged hefty fee to treat her poorly French Bulldog Chanel

'There's no mistakes, only lessons': Kerry Katona admits she doesn't 'regret' her drug use and that she used substances as a 'coping mechanism'