The massive early run and all those turnovers UCLA forced were not going to lead to the easy evening the Bruins once envisioned.

A sustained sloppy stretch in the second half helped swing a Maples Pavilion crowd that once generated more noise for the visitors back squarely in favor of the home team.

When Stanford’s Brandon Angel rose for a three-pointer with 4 1/2 minutes left Thursday night, a UCLA lead that was once 23 points was down to eight and the tension inside the old building was palpable.

It was then that the Bruins turned to an old friend to get them through the tough times.

Senior forward Jaime Jaquez Jr. banked in a short jumper and made a layup amid a couple of defenders to spark a late mini-run that helped the No. 21 Bruins hold off the Cardinal for an 80-66 victory in their Pac-12 Conference opener.

Jaquez finished with 27 points on 12-for-17 shooting to help UCLA (6-2 overall, 1-0 Pac-12) make 59.3% of its shots and withstand a slipshod second half in which it committed 13 turnovers, fans finally exhaling with an eight-clap with about 1½ minutes left.

The game did not appear headed for a dramatic finish given its lopsided start.

Only a few seconds after tipoff, UCLA’s Jaylen Clark double-teamed a driving Brandon Ingram, the extra help confounding the Stanford forward and forcing a traveling violation.

The Cardinal couldn’t even get the ball past halfcourt on its next possession. A 10-second violation continued a procession of turnovers that made it seem as if Stanford had never faced a full-court press.

The chant that serenaded the Bruins after Jaquez stole an inbounds pass for a breakaway dunk provided some comforting familiarity in their first true road game of the season. 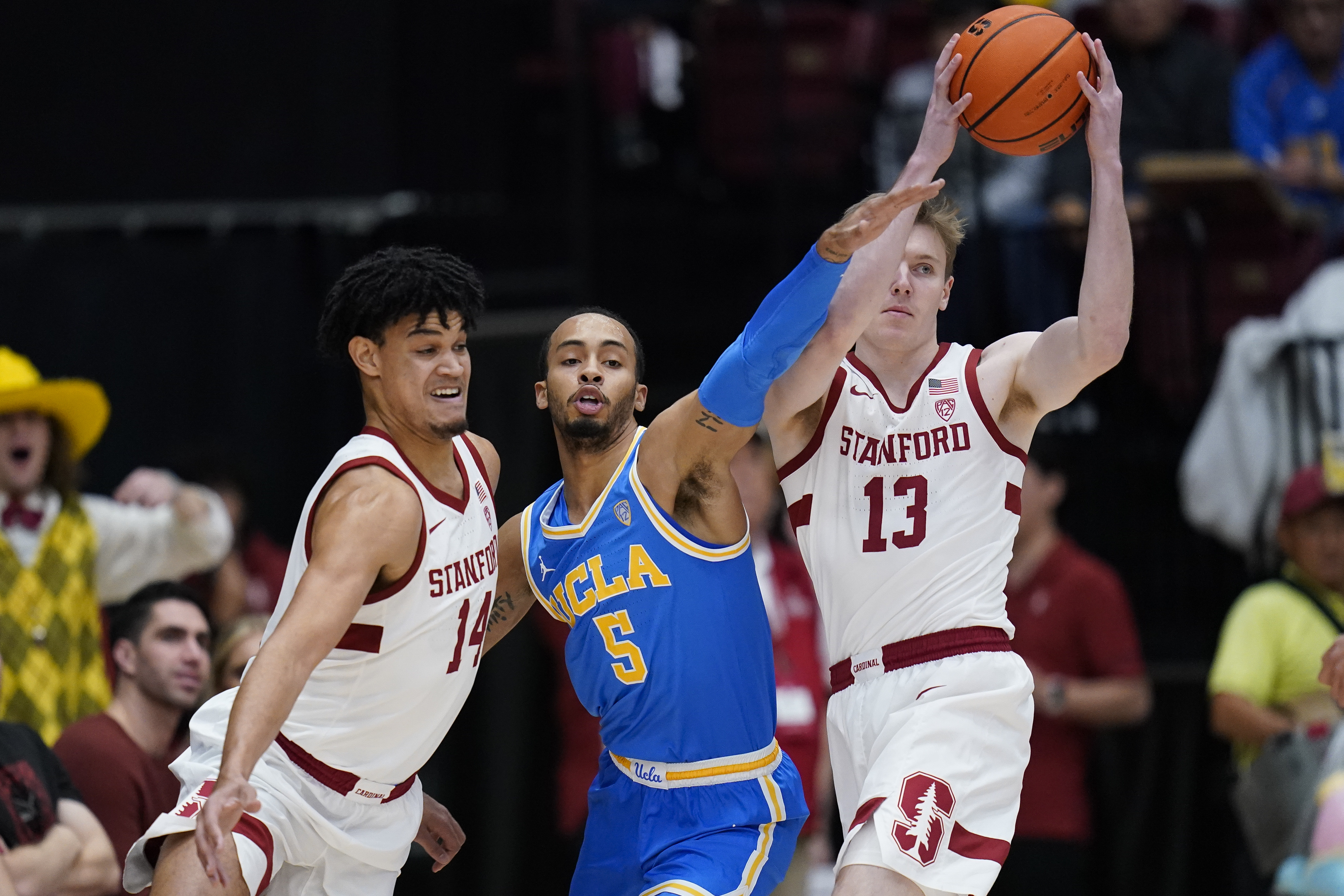 Stanford guard Michael Jones (13) looks to pass as UCLA guard Amari Bailey (5) defends against forward Spencer Jones (14) during the first half on Thursday in Palo Alto.(Godofredo A. Vásquez / Associated Press)

The Bruins held a 50-29 halftime lead after shooting 62.9% to Stanford’s 43.5% and forcing nine Cardinal turnovers. The highlights included what looked like a Bailey trapeze act given the way he flew toward the basket for a put-back dunk that had his teammates flapping towels on the bench in celebration.

Bailey also drove for a dunk as the Stanford defense mysteriously parted upon his approach toward the basket. The Bruins effectively freed shooters to take inbounds passes from Campbell, leading to three jumpers they hit.

Role reversal early in the first half helped Stanford go on a 9-0 run amid four UCLA turnovers. Fans clad in red finally stirred as their team pulled within 50-38.

But Jaquez put back his own miss while getting fouled, making the resulting free throw to complete a three-point play, and a Campbell steal led to a David Singleton three-pointer in transition.

Campbell followed with a three-pointer, and just like that, the Bruins had matched Stanford’s run to restore their 21-point lead.

UCLA’s stumbles the week before Thanksgiving in Las Vegas, where the Bruins dropped games against Illinois and Baylor, have left them with a two-pronged approach as they try to reignite their bid for an excellent NCAA tournament seeding.

The first item on the to-do list is to go unbeaten before facing No. 22 Maryland and No. 19 Kentucky later this month as part of an East Coast swing that could quickly send their season on a more favorable trajectory.

Stanford hasn’t made the NCAA tournament since it advanced to the Sweet 16 during the 2013-14 season. But the Cardinal recently logged a recruiting victory over UCLA, Oregon and Texas when they signed sharpshooter Andrej Stojakovic, the son of three-time NBA All-Star Peja Stojakovic.

After their horrid opening stretch Thursday, that was about their only consolation.

A British woman claims doctors ignored her symptoms — which included vomiting blood and losing chunks of hair — until eventually she received a terrifying diagnosis. Jessica Booth said she knew something wasn’t right when her persistent headaches and nausea began last year. But she says she was dismissed by ...

Anthony Bourdain‘s legacy centered around cooking on and off television. He went from being an executive chef in Les Halles to being a TV personality in various food shows. He even became an author of a best-selling book early in his career. The book he wrote was titled Kitchen Confidential: ...