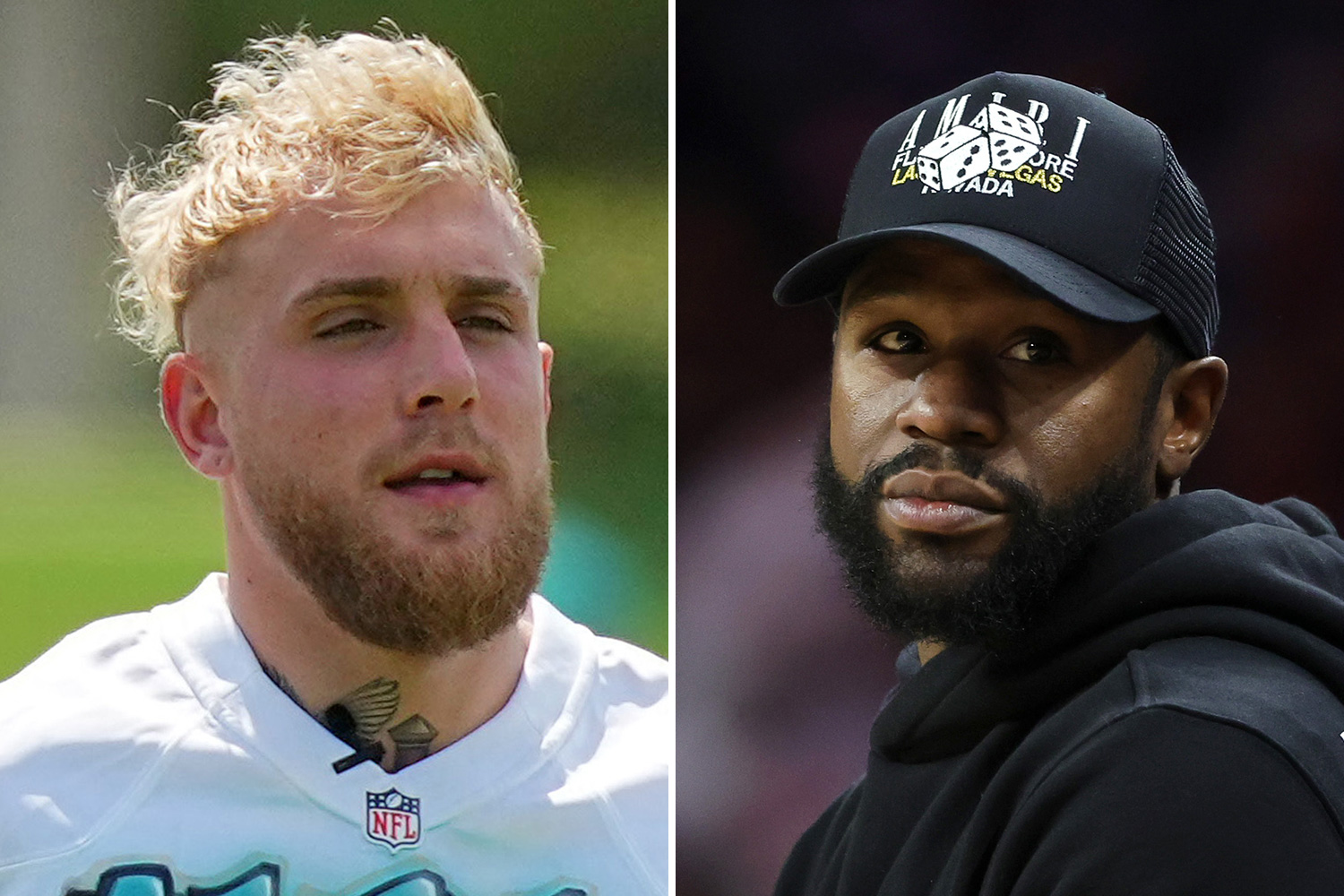 JAKE PAUL has claimed boxing legend Floyd Mayweather is “scared” to risk his unbeaten professional record against him.

Mayweather, 45, hung up his gloves in 2017 after beating UFC star Conor McGregor to extend his winning streak to 50-0. 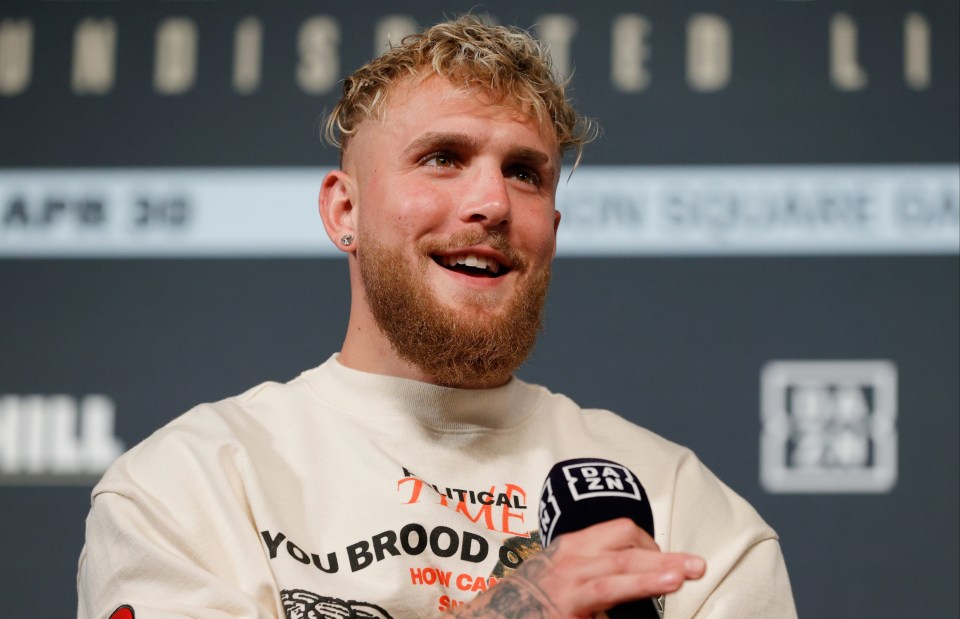 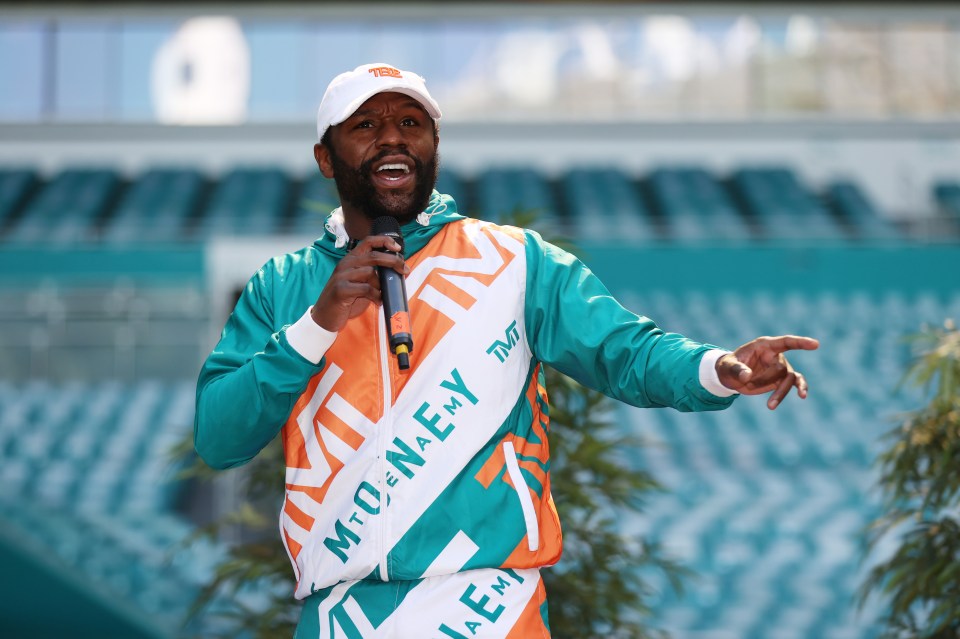 Mayweather has not fought professionally since he beat McGregor back in 2017Credit: Getty

Since then he has taken part in several exhibition bouts – including against Jake's older brother Logan Paul last year – but has not returned to pro boxing.

A fight between Mayweather and Jake remains a somewhat fanciful proposition given the pair have competed at contrasting weights – with a two-stone difference between them.

Yet Paul, who is currently 5-0 as a pro, continues to goad Mayweather in an attempt to bring him out of retirement.

Speaking on his new show BS w/ Jake Paul, the 25-year-old, who grabbed Mayweather's hat off his head at a press conference last year, said: “Floyd, we respect you, bro.

“I took your hat, but if you ask anyone in my camp, I always talk about how awesome you are and how legendary you are.

“So we respect Floyd on this side of things, even though I know you're scared to fight me as a real professional bout.”

Paul has not yet fought anybody close to the level of Mayweather – who won world titles in five weight classes and is widely regarded as one of the greatest to ever lace up the gloves.

He was due to face Tyson Fury's brother Tommy earlier this month before visa issues saw the Brit pull out of the clash for a second time.

Paul then agreed to take on Hasim Rahman Jr – a heavyweight fighter with a record of 12 wins and one loss.

But that too fell through when it became apparent Rahman would not be able to make the 200lb limit.

With no fight scheduled, Paul is set to fly to Manchester next month where he reportedly plans to taunt Fury in his hometown.

The American is coming to the UK to support Amanda Serrano as she takes on IBF featherweight champion Sarah Mahfoud on the Joe Joyce vs Joseph Parker undercard on September 24.

Cycling: Valverde, Nibali will ride into the sunset at Il Lombardia

Football: A classic clash that could be decided by teen talents Bellingham and Musiala

Shohei Ohtani has had the greatest baseball season of all time, but Aaron Judge’s Yankee ties might decide MVP argument

West Ham boss David Moyes believes his side are showing signs of getting back to their best after a 1-0 Europa Conference League win at Anderlecht.

Red Devils claimed Europa League win Opted not to head straight home Face Everton at Goodison on Sunday WHAT HAPPENED? A 3-2 victory in their latest continental outing helped the Red Devils to shake some derby disappointment from their system following a 6-3 reversal against Manchester City in the ...

American Tom Hoge holds a one-shot lead after the opening round of the PGA Tour's Shriners Children's Open in Las Vegas.

LONDON – US star Megan Rapinoe has urged football authorities to use the “horrifying” revelations of systemic sexual abuse and misconduct in the American domestic women’s game as a catalyst for change. A report published by former US attorney general Sally Yates earlier this week featured multiple allegations of ...

BUENOS AIRES – A football fan died in Argentina and the match between Gimnasia La Plata and Boca Juniors was abandoned on Thursday after tear gas fired by police outside the venue drifted into the stadium and made it difficult for players and spectators to breathe. The circumstances surrounding ...

BANGKOK – Failure to award world-ranking points at the Saudi-backed LIV Golf event in Thailand starting on Friday renders the rankings “inaccurate”, the Mena Tour said on Friday. The Official World Golf Ranking (OWGR) organisation said on Thursday that players will not receive ranking points in Bangkok or at ...

Portuguese star on target in Europe Told where he can still improve Nketiah another one catching the eye WHAT HAPPENED? The Gunners invested £30 million ($33m) worth of faith and funds in the highly-rated 22-year-old during the summer transfer window, with a surprising deal put in place with Porto. ...

Lucas Browne told he is TOO OLD to fight at 43 as BBBC refuse to sanction bout against Brit Daniel Dubois - while Tyson Fury has backed the Aussie boxer, saying 'let the man fight'

Bodo/Glimt's players are forced to WALK to the Emirates ahead of their 3-0 defeat by Arsenal... as their team bus gets STUCK in the 'narrow back streets' of north London

'We made it a bit scary for ourselves, but overall I thought we deserved the victory': David Moyes feels his West Ham side are getting back to their best after a 1-0 will over Anderlecht

'The subs really had an impact today and that is really good': Erik ten Hag lauds Marcus Rashford and Anthony Martial after their goals from the bench rescued Man United, but admits his side has 'to take responsibility' for mistakes

SAMI MOKBEL: It was easy for England not to take the knee for recent Nations League games because that's what they're used to in the Premier League... but they can still make a powerful gesture at the World Cup in Qatar

Jess Fishlock: Winning goal was a moment dreams are made of

Mikel Arteta 'really happy' with 3-0 win over Bodo/Glimt... but insists his Arsenal side 'can do much better' ahead of crucial Premier League clash with Liverpool

'Everything he does is with purpose': Joe Cole hails 'fantastic' Arsenal midfielder Fabio Vieira after the playmaker starred during Arsenal's 3-0 win over Bodo/Glimt in the Europa League... praising his 'velvet left foot' and 'confidence'

'Mikel Arteta is right to set the bar high': Martin Keown lauds Arsenal's hunt for 'perfection' as stroll to Europa League win ahead of Liverpool clash... while Joe Cole praises the side's 'culture to demand excellence'

'We've spent a lot of time in fight club and the pen of pain, but it has paid off': After 25 straight wins, England rugby captain Sarah Hunter is ready to take the 'bad guys' to World Cup glory

KATHRYN BATTE: The Lionesses are set for their toughest test yet on Friday, as the European Champions go up against World Cup winners USA who remain the team to beat in women's football

RIATH AL-SAMARRAI: Conor Benn's failed drugs test and the attempt for his fight with Chris Eubank Jr to go ahead is another sorry STAIN on a sport that's careering out of control... some questions about the whole saga need URGENT answers

EXCLUSIVE: Gareth Southgate's England side are undecided on taking the knee at the World Cup in Qatar, after they did not do so for the first time in two years against Italy and Germany last month

MARTIN SAMUEL: All integrity is lost when sport becomes a cynical game of looking for loopholes... PLUS, Pep and Haaland will one day leave City and their dominance will pass - and maybe Neville and Qatar will be a perfect fit!

Q&A: Why was Eubank-Benn fight postponed and what happens next?

TCU Takes on Kansas With Big 12 Lead on the Line