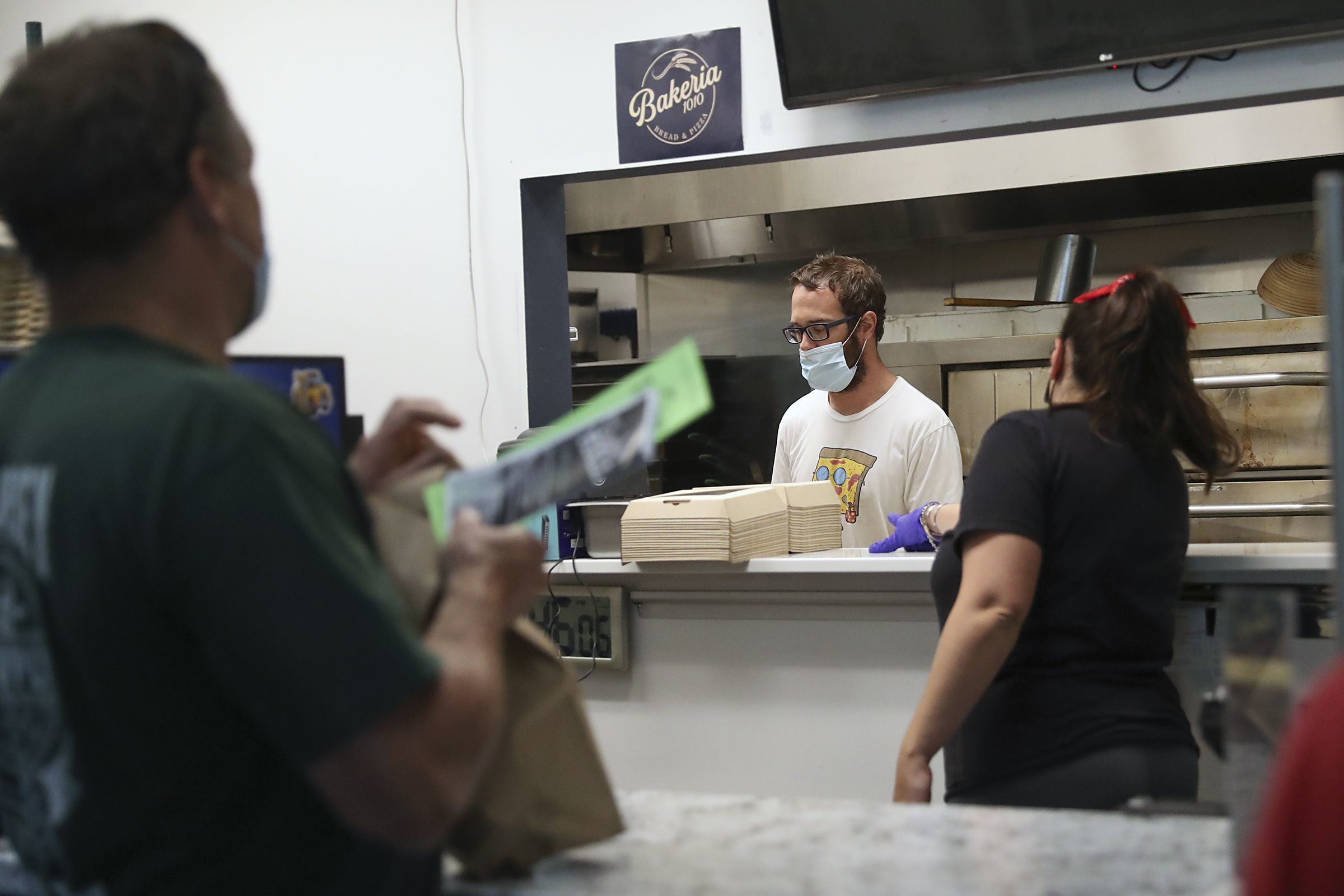 Mike Fitzick working behind the counter at Bakeria 1010 with his wife, Maura, during the height of COVID-19 in 2020.

Carollo, who opened Spuntino (“Snack”) seven years ago on the corner of Second Street and Fairmount Avenue, said he expects to close in late December. Fitzick plans to lightly remodel and open Bar 1010 — working name — in early January. He will use the wood-fired oven to bake super-thin-crust 14-inch rounds and other dishes. “Not necessarily Italian,” he said. “Lots of cool stuff.” Fitzick plans to enlarge the bar, too.

Bakeria’s days are numbered in its current location, inside a food hall on New Road called The Exchange. A new owner is turning The Exchange into medical offices for AtlantiCare, which will force the closings or relocations early next year of Bakeria 1010 and other family businesses such as Lil Saigon (Vietnamese cuisine), La Tia (Peruvian cuisine), Boba Works, and Mochi Ring Donut (which only recently rebranded from Hancook, a Korean eatery). All the food-hall businesses are currently open.

The Spuntino location in Doylestown, which Carollo’s brother, Roberto, operates, is unaffected.

Fitzick, 37, is a Manco & Manco’s alum who made pizzas at Valentina’s in Northfield before growing an Instagram following eight years ago with pop-ups as Pizza Jew.

Salvatore Carollo, 38, said he was looking forward to doing something new with his fiancee. It will be in the pizza realm — “that’s all I know,” he said. His great-grandfather Vito and grandfather Ambrogio were bakers in Carini, Sicily, and his father, Aldo, founded pizzerias in Bucks County and Northeast Philadelphia.

He said he was happy for the buyer. “I’ve lived in the neighborhood for so long. Having someone in there that I know is going to do a great job and pick up where I left off definitely feels good.”

Midcentury modern living room Originally, living rooms — including parlors and drawing rooms — were used as places of visitation for lost loved ones, or only utilized on fanciful occasions. However, in the early 20th century, Edward Bok, an editor for Ladies’ Home Journal, suggested we start to shift ...


View more: This Living Room Seating Trend Will Be Big In 2023

Kanye West Under Investigation For Robbery After Grabbing Woman’s Phone As She Films Him: Watch In a video of the incident, Kanye argues with a woman filming him and he ends up grabbing her phone and throwing it into the street. Kanye West, 45, is being investigated for robbery ...


View more: Kanye West Under Investigation For Robbery After Grabbing Woman’s Phone As She Films Him: Watch

Dana Brooke Smiling While it’s well known that Brock Lesnar and Cody Rhodes will be two of the wrestlers to be in the upcoming men’s Royal Rumble match, there have been some other potential entrants revealed by Fightful Select. Some of those that are backstage in San Antonio and are ...

The CFTB has already distributed more than $9 billion to California residents and the final payments should arrive in the coming weeks. The state of California is continuing to distribute one-off payments worth up to $1,050 to residents as part of the Middle Class Tax Refund. The process has ...


View more: California relief checks: Who has to file taxes to get the stimulus checks?

Mom making iced coffee with her baby Introspection is part of every single one of our lives — from waking up, scrolling through social media, and hanging out with our close friends, we’re always running through our inner monologues. When we see a story being told on social media — it’s ...

Technology has been taking over the world, especially within the last decade with the advent of the gig economy.  Now, more and more companies are figuring out how to make themselves more efficient by becoming more tech friendly. CLICK TO GET KURT’S CYBERGUY NEWSLETTER WITH QUICK TIPS, TECH REVIEWS, SECURITY ...


View more: Virtual employees on the rise in China, should Americans be worried?