Jessica Simpson glammed up to hit the slopes during a recent family trip to Aspen, Colorado.

The 42-year-old songstress-turned-entrepreneur had fun with her fashion as she posed in photos with her two daughters.

Maxi Drew, ten, and Birdie Mae, three, were their mother’s mini mes as they appeared in sweet outtakes from the getaway. 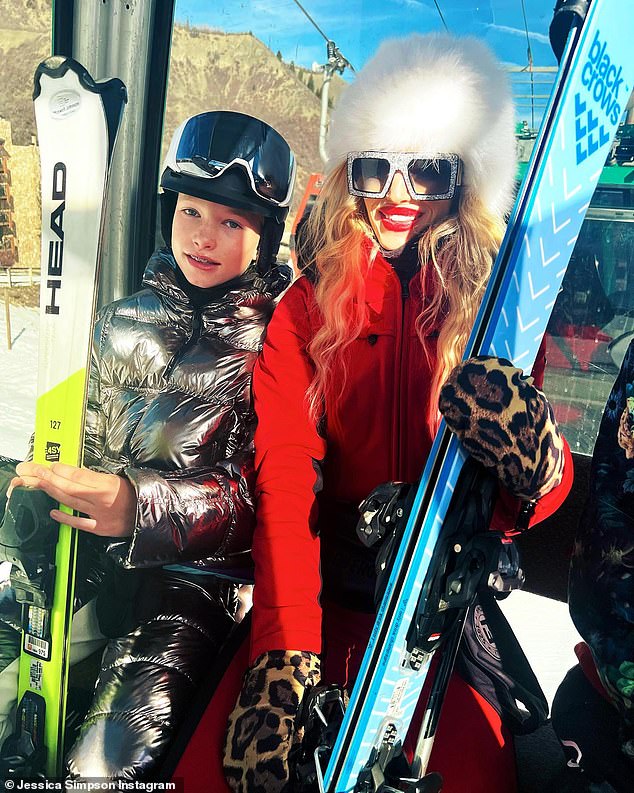 Fashionista: Jessica Simpson glammed up to hit the slopes during a recent family trip to Aspen, Colorado

The Sweetest Sin hitmaker was bold in her sartorial choice as she rocked a bright red snowsuit with leopard print gloves.

Her outdoor romper featured thick black stripes going down the sides, as well as a black hood.

It also featured a thick black belt that hugged her teeny waist — seven months after revealing she lost 100 pounds for the third time.

Jessica, who was formerly married to Nick Lachey for three years, belted a black fanny pack right below it. 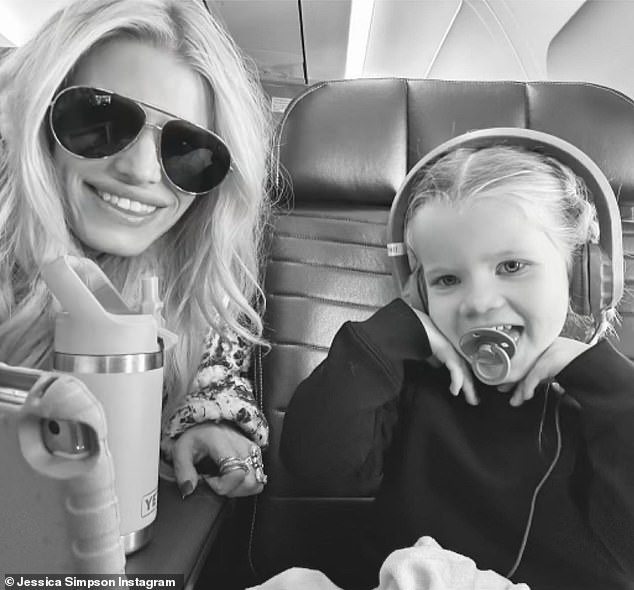 Cute: The 42-year-old songstress-turned-entrepreneur had fun with her fashion as she posed in photos with her two daughters 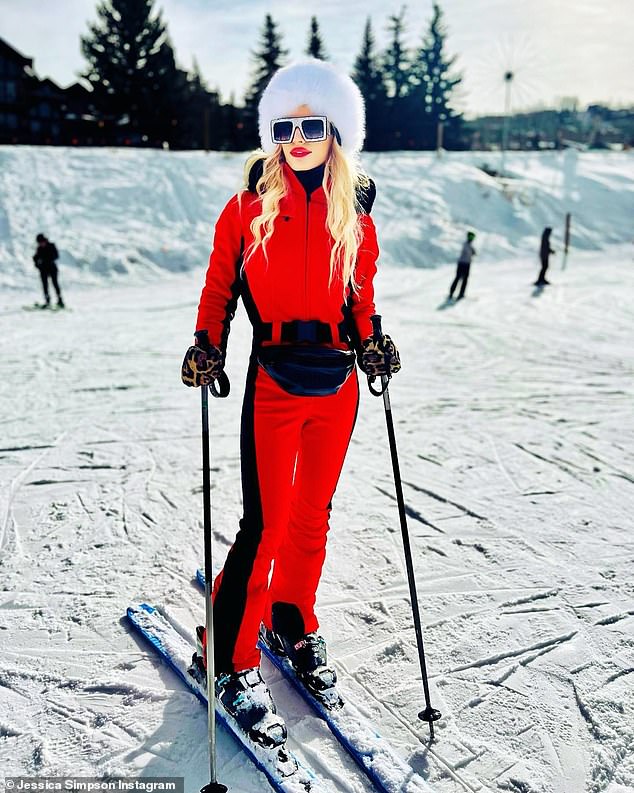 Snow bunny: The Sweetest Sin hitmaker was bold in her sartorial choice as she rocked a bright red snowsuit with leopard print gloves

The mother-of-three paired the fun onesie with matching crimson lipstick coated on her plump lips.

The blonde bombshell let her locks tumble down from underneath a furry white shapka in spiral curls.

Taking the ensemble up another level, she donned a pair of flashy and oversized square-shaped sunglasses.

The eyewear was set with a glittery silver frame that reflected off the white Colorado snow. 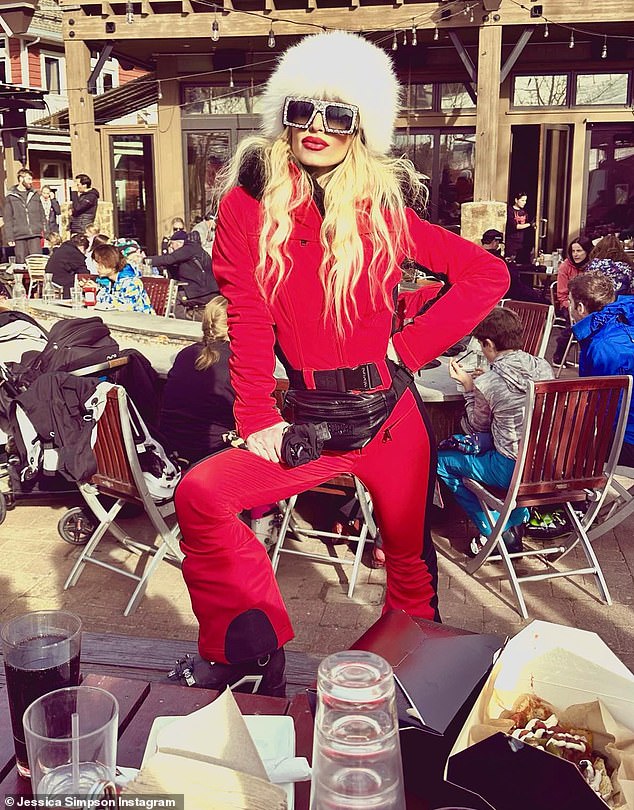 Coordination: Her outdoor romper featured thick black stripes going down the sides, as well as a black hood 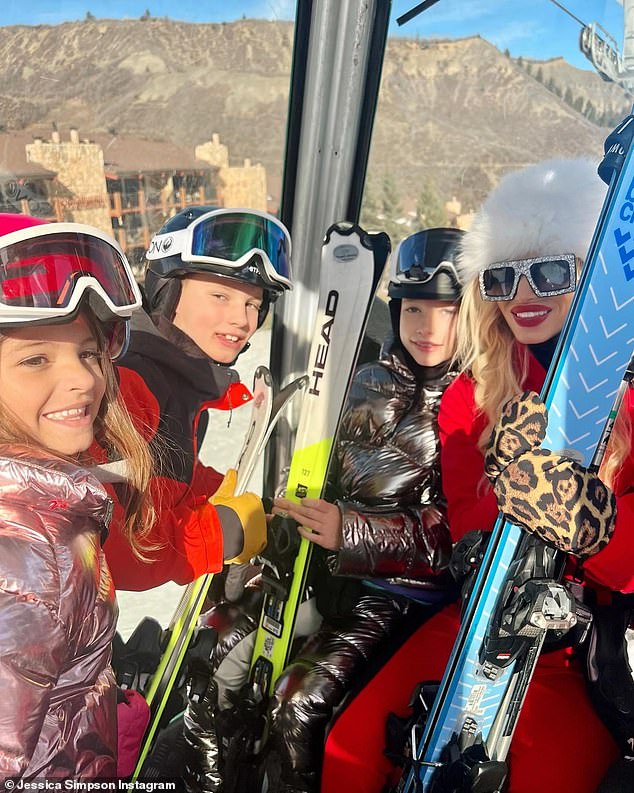 Engaging: In a caption to her 6.1 million Instagram followers she wrote, ‘Snow Bunnies,’ with a rabbit emoji

In a caption to her 6.1 million Instagram followers she wrote, ‘Snow Bunnies,’ with a rabbit emoji.

Additionally, she shared photos with her son — Ace Knute, nine, who she shares with husband Eric Johnson.

Jessica’s father Joe Simpson, 64, was also in tow for the mountain holiday, as well as mom Tina Simpson, 62, and sister Ashlee Simpson, 38. 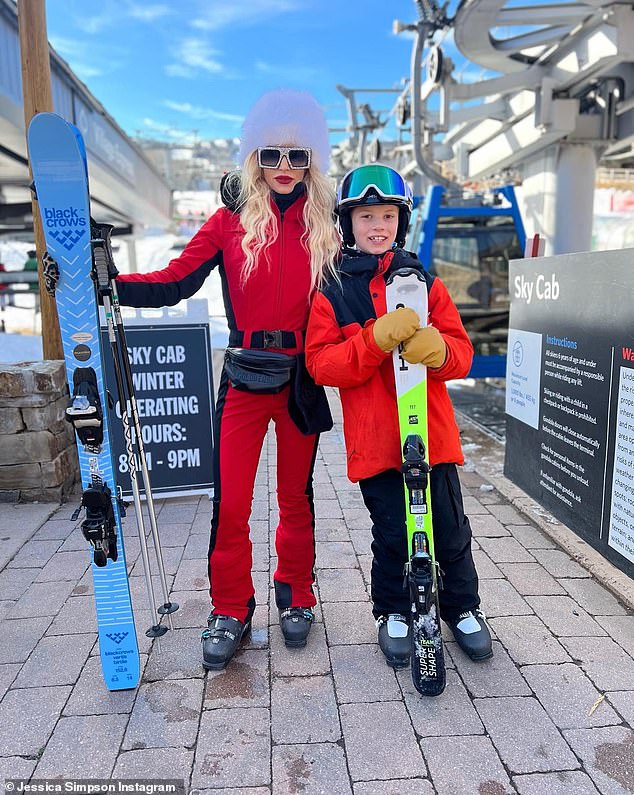 Detail: Her onesie also featured a thick black belt that hugged her teeny waist — seven months after revealing she lost 100 pounds for the third time 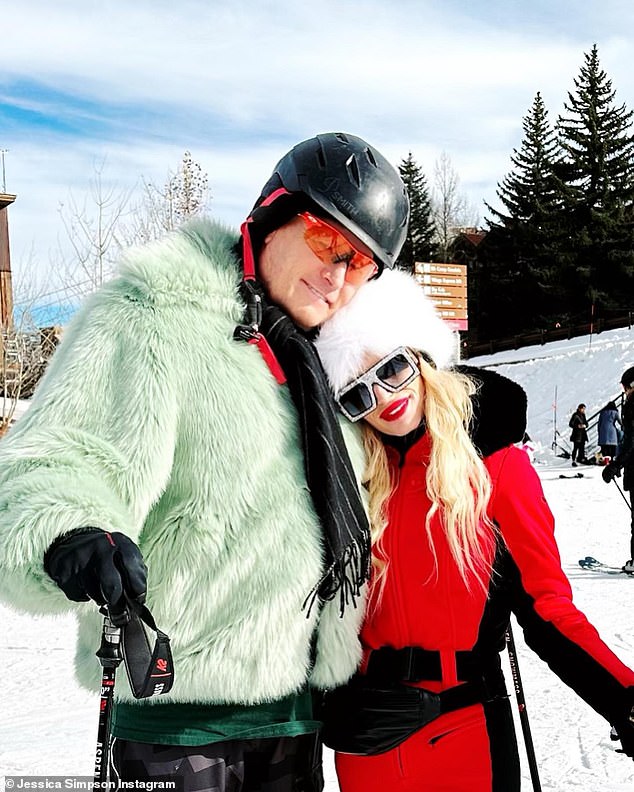 Father and daughter: Jessica’s father Joe Simpson, 64, was also in tow for the holiday in the mountains 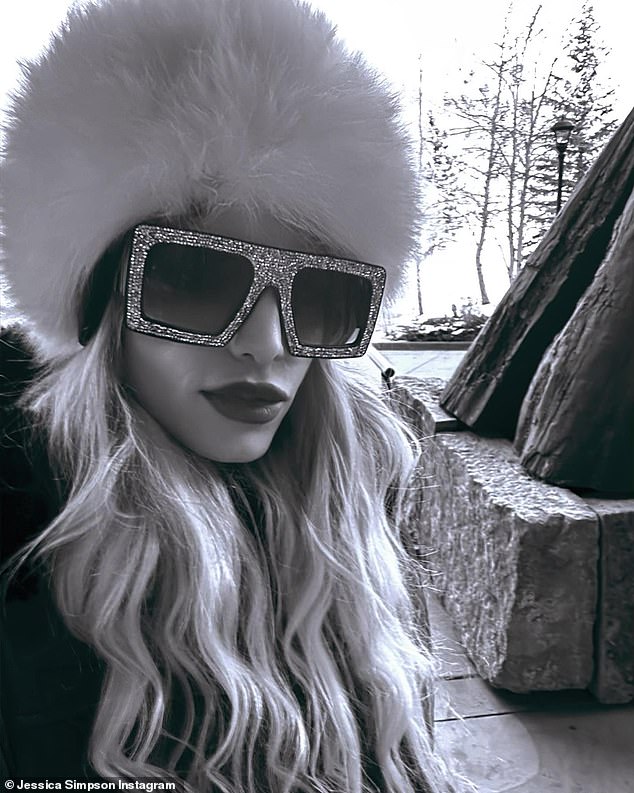 Luxe: The blonde bombshell let her locks tumble down from underneath a furry white shapka in loose waves 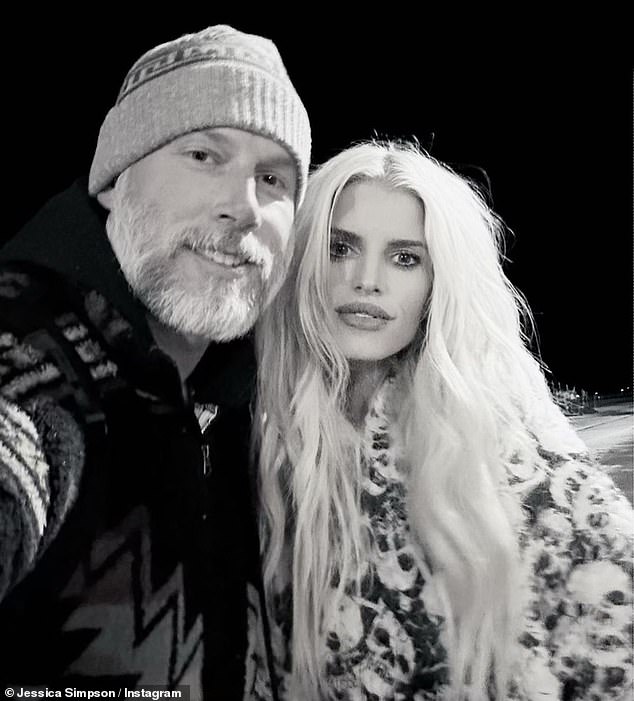 Lovebirds: Eric joined his wife since 2014 in a sweet black and white selfie

Another set of photos uploaded in a separate post was captioned, ‘Winter Wonderland.’

It included a snapshot of Birdie in a tan-colored mini snowsuit with black leopard print spots throughout.

The tot wore a ribbed black beanie with an adorable pom pom ball on top as her blonde hair was styled in two hanging braids underneath it.

Simpson also included photos taken at the airport in one of three carousels dedicated to the trip.

In the final set of snaps she simply captioned, ‘Aspen,’ with a green heart emoji. 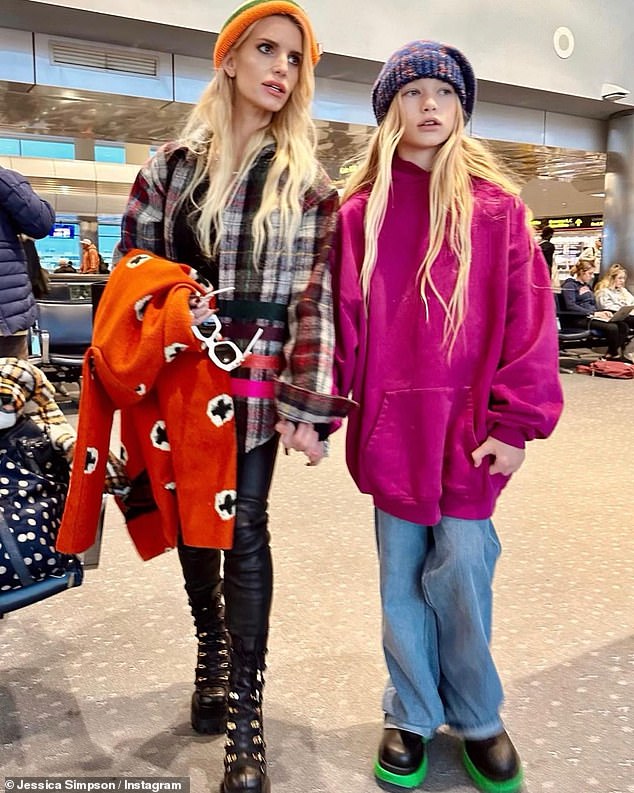 En route: Simpson also included photos taken at the airport in one of three carousels dedicated to the trip 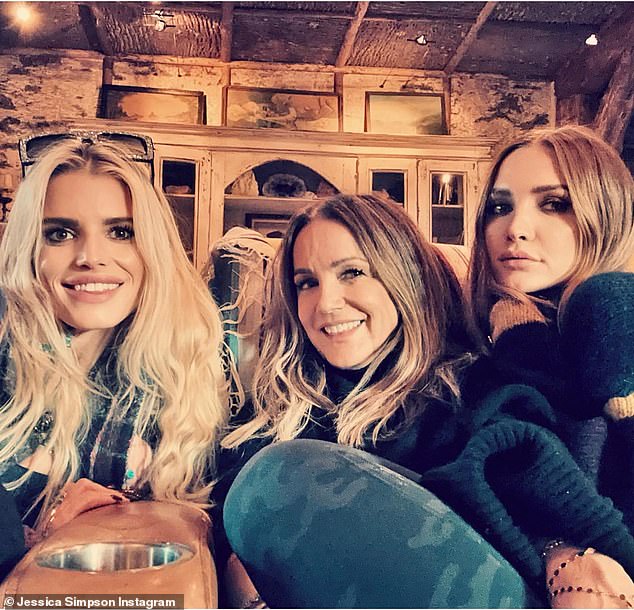 Trio: The singers posed on either side of their mom Tina in one cozy flick shared online

The fun trip was well-documented and the music artist-turned-businesswoman racked up thousands of likes.

Simpson recently appeared to respond to concern from fans that she was slurring her words in a recent Pottery Barn ad with a video of the star singing along to her 2020 song Party of One.

In addition to passionately reciting the lyrics ‘I don’t give a f**k about you,’ she wrote a lengthy caption declaring she’s been alcohol-free for five years.

She detailed how she blocks out the ‘destructive noise’ of people’s comments and judgements. 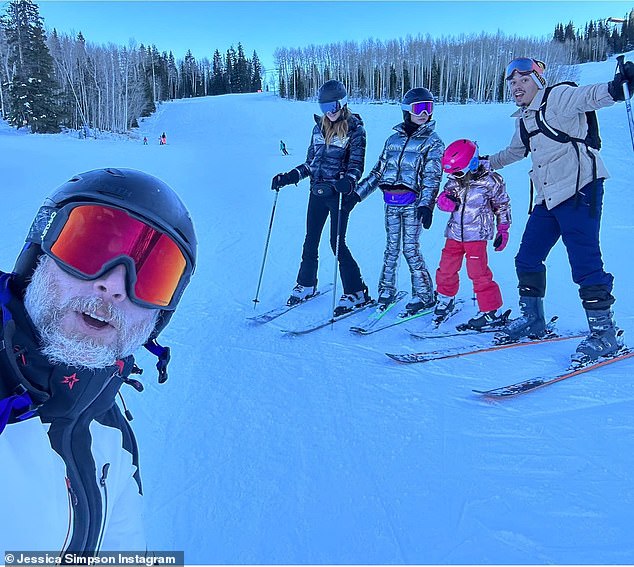 Family fun! Eric leaned in to snap a selfie with Evan Ross and some of the kids

Simpson began the caption: ‘I needed to be in my studio today because this is where I ground myself and heal.

‘As much as I have learned to block out destructive noise…people’s comments and judgements can still hurt deeply with their incessant nagging “you will never be good enough.””

She continued: ‘The most important thing I have learned through the last 5yrs without alcohol being a guard for escapism, is that I CAN and ALWAYS WILL get through it.’

She affirmed, ‘I am capable of pretty much anything I care enough about to put my mind to. I am present. I am deeply inspired. I am determined. I am honest. I care about other people.’ 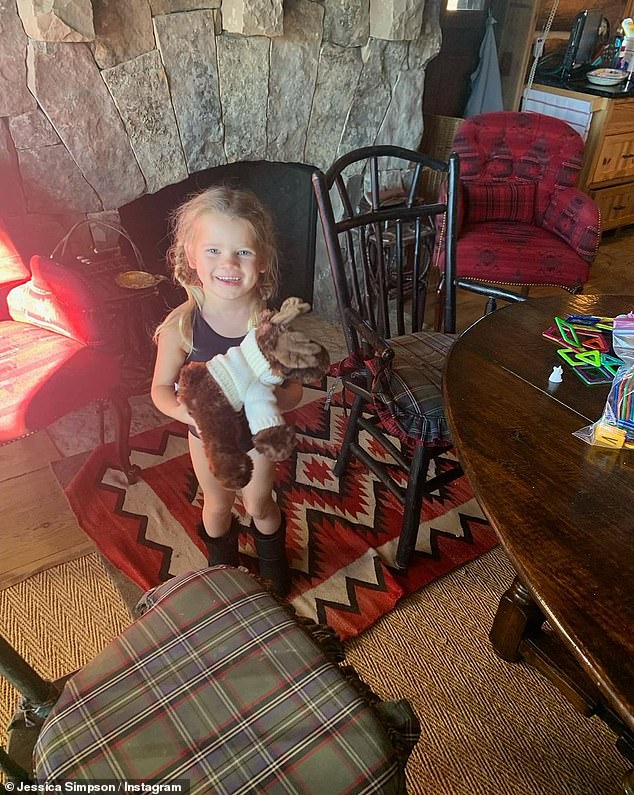 Sweet girl: Birdie smiled adorably as she held a stuffed animal in her hands while inside a cozy cottage 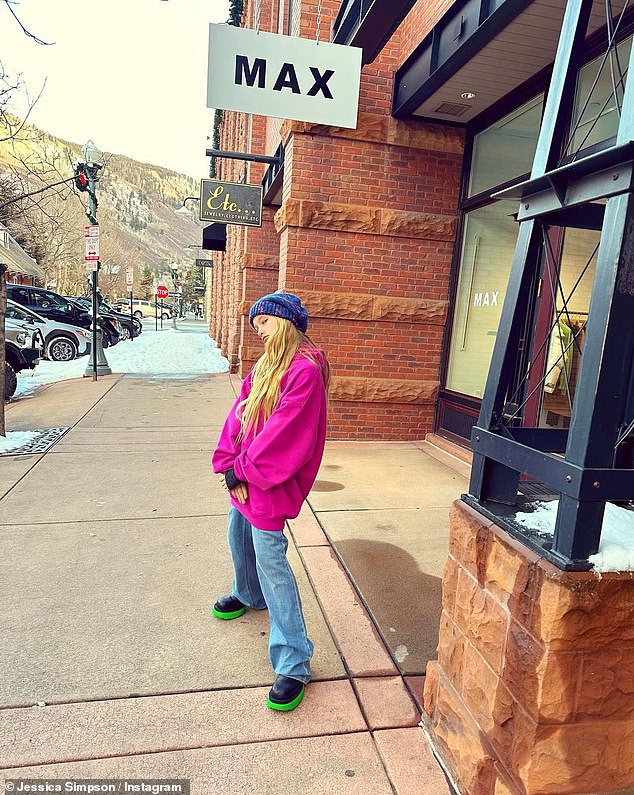 Cute: Maxwell, who goes by nickname Maxi, posed playfully underneath a store front with her name 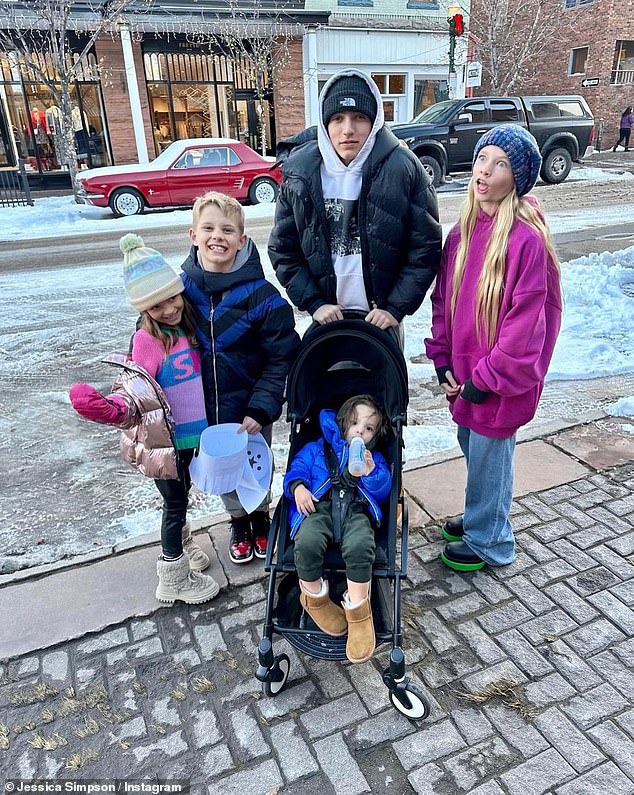 Big brother and cousin: Bronx was a doting family member as he looked after his siblings and cousins

The former reality TV star added: ‘After grounding myself just now with my voice and the lyrics across my heart, I feel compassion for the opinionated hate that some people can so effortlessly just blurt out with such intensity on social media or in the media in general.’

‘We all have our days of wanting to be, look, do, and feel better. Nobody is alone with that feelin’ that I can promise you. I woke up at the same time anxious and insecure but also also angry and defensive — like some of you.’

The heartfelt message went on, ‘I know what works for me and that is to let go and simply sing while lookin directly inside the mirror, straight in my eyes to really see and understand myself. I can connect with my heartbeat. I am stable and strong. I am home.’

‘A little advice…live inside your dreams and move through them. Don’t give up on yourself because someone else did. Stay true to YOU. It has worked for me in this chaotic life thus far. Nothin’ and nobody will rob me of my joy. Ya might come close but it is mine to own. Yours should be too,’ she concluded. 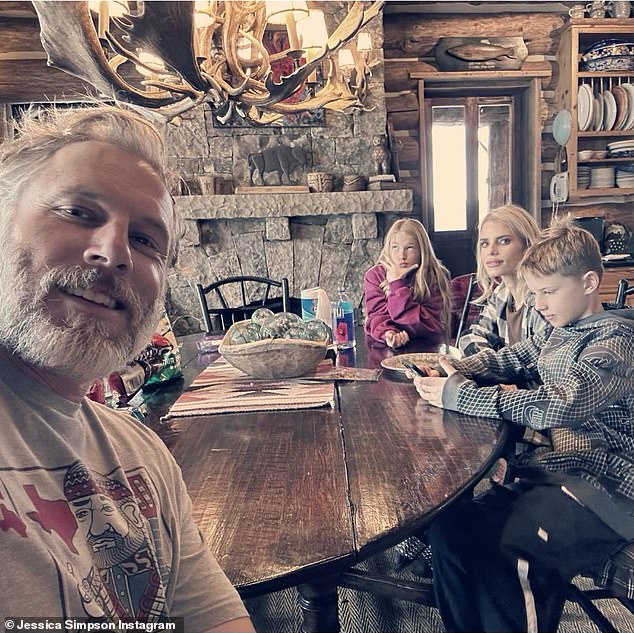 Quality time: The head of the Johnson family snapped a photo inside a quaint cottage 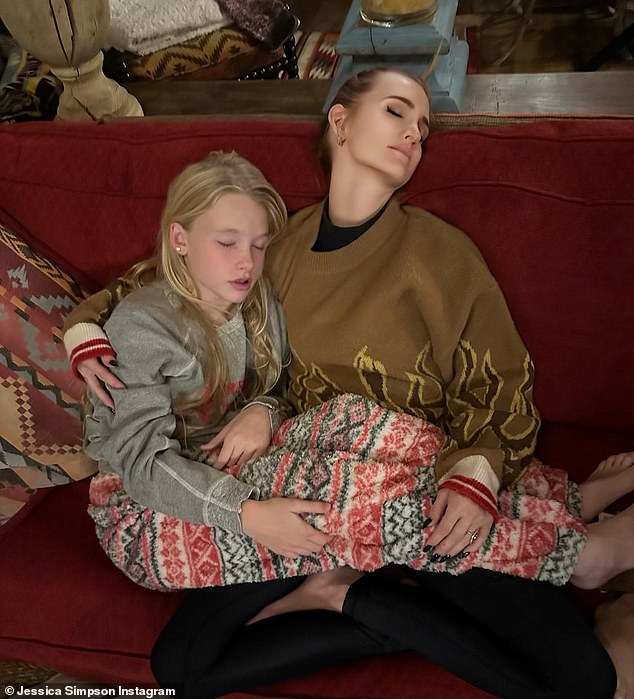 Nap time: Maxi cuddled with her aunt as the two caught some Z’s on a red couch

Precious! One snapshot showed Birdie in a tan-colored mini snowsuit with black leopard print spots throughout

In September Jessica addressed her 100lb weight loss, which she lost in 2019 after having the last of her three children.

The star revealed to Extra’s Terri Seymour that what really helped her slim down was changing her menu.

‘I went to a nutritionist, and I needed to get my eating habits right,’ she said. When asked if she feels ‘healthy’ the siren said: ‘I absolutely feel healthy.’

She added, ‘I don’t know. I feel like my old self before I had children and all the hormones going wild.’ 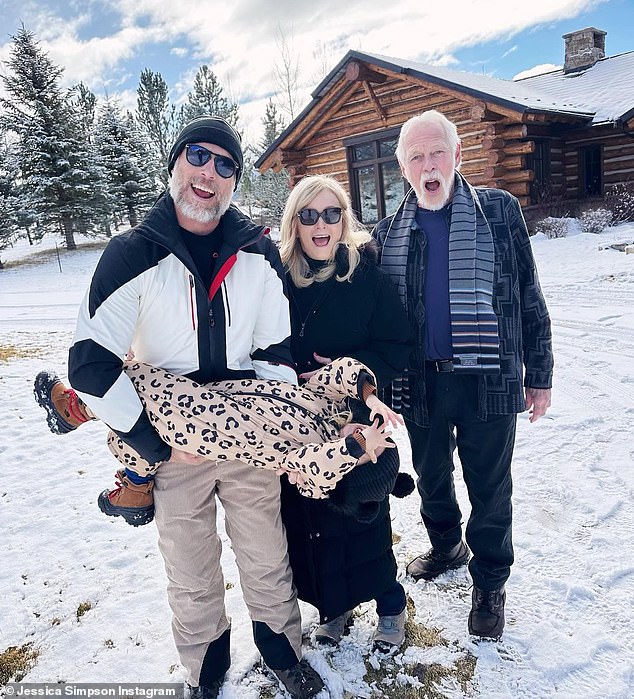 Multigenerational trip: Eric’s parents joined in for the family fun 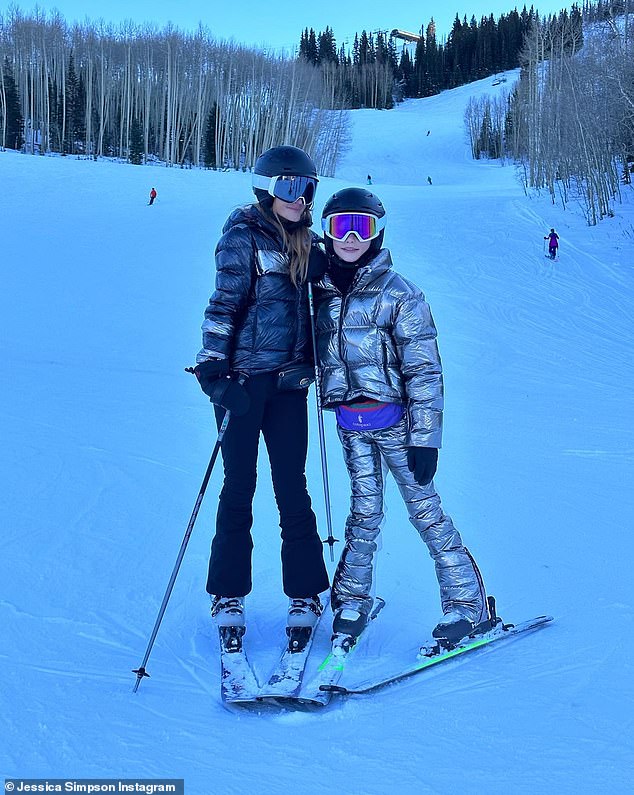 Photo op: Maxi showed off her matching metallic coat and pants during a day of skiing 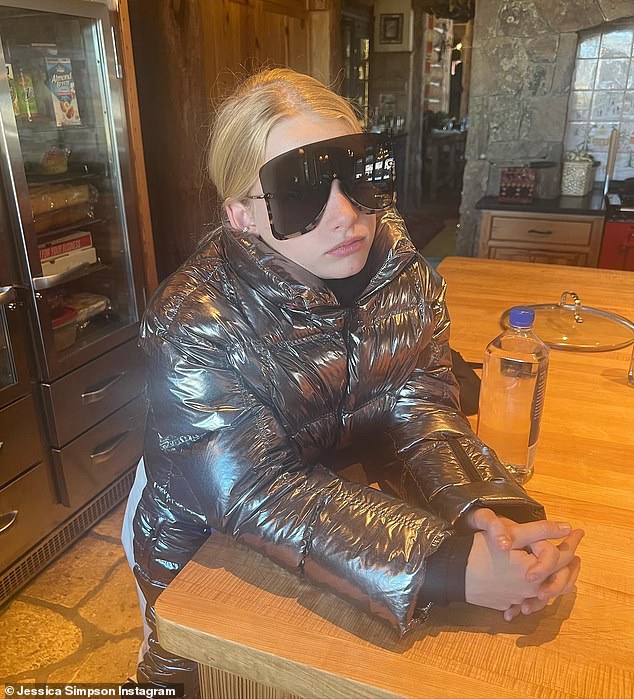 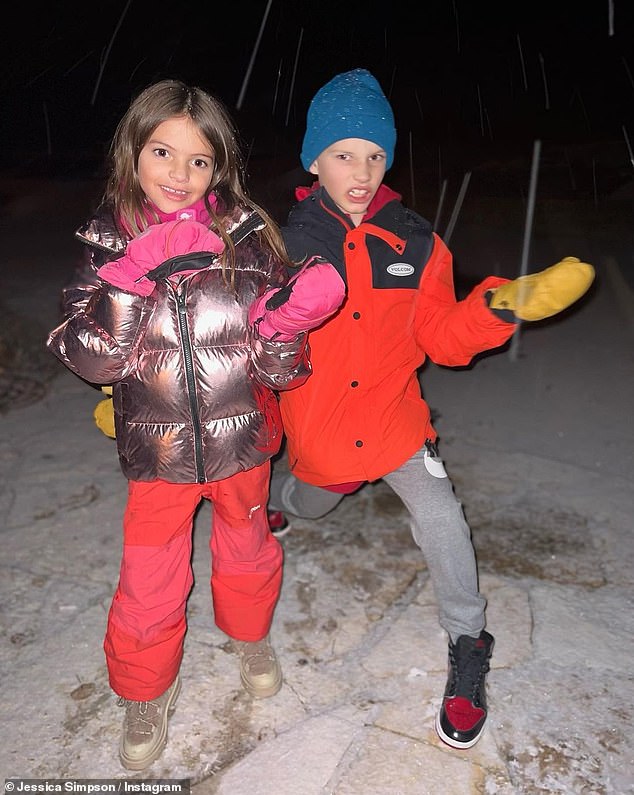 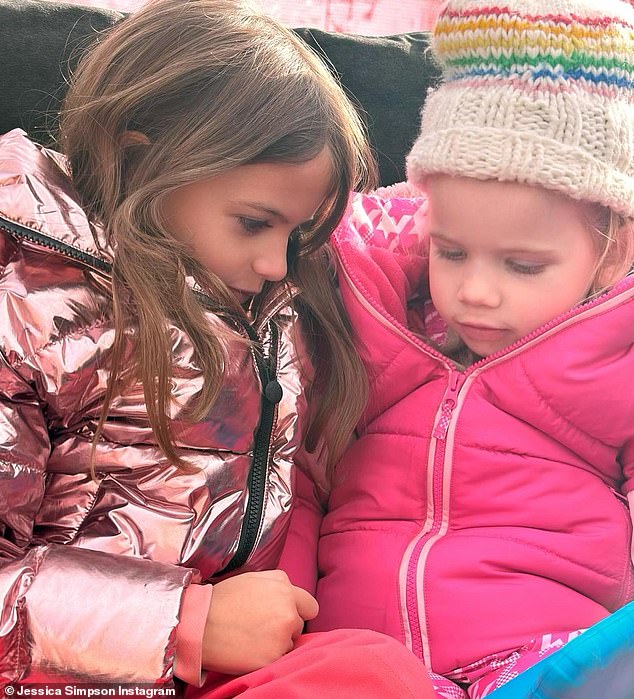 Good times: The kids appeared to get along swimmingly during the group getaway 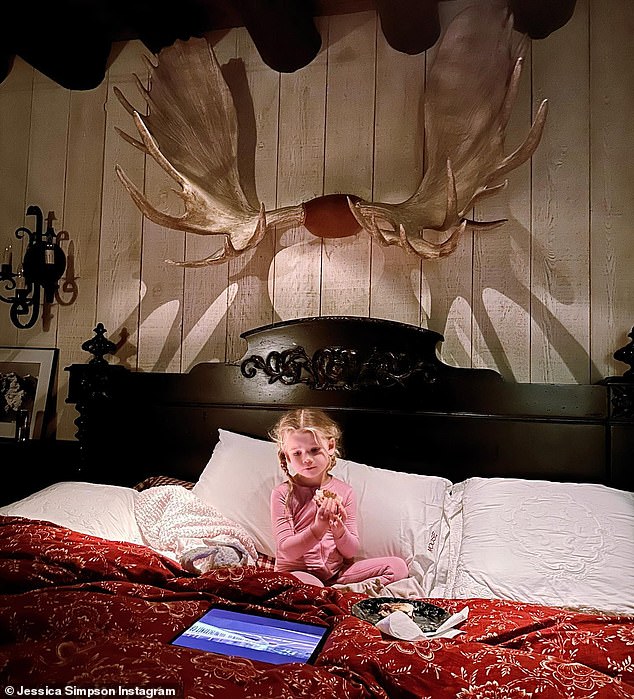 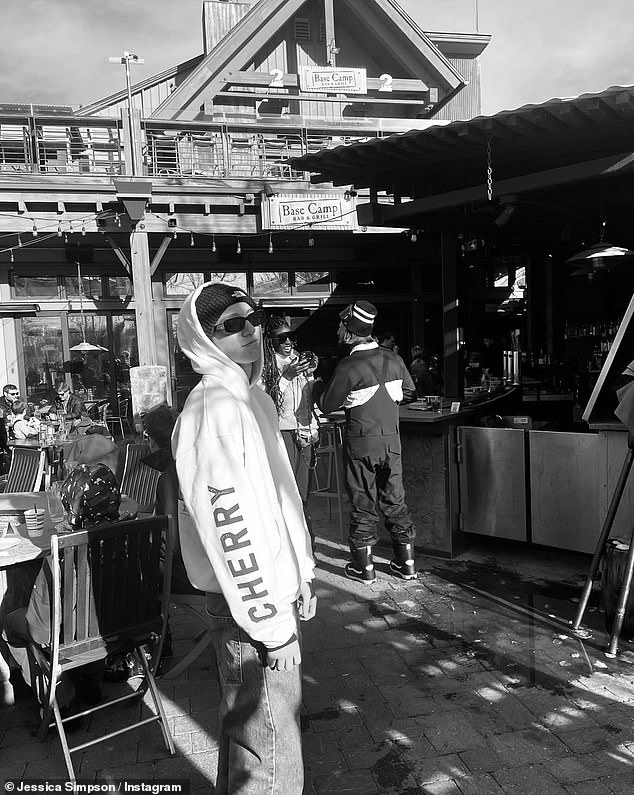 Too cool: Ashlee’s son Bronx, who she shares with Pete Wentz, sported sunglasses and a hoodie 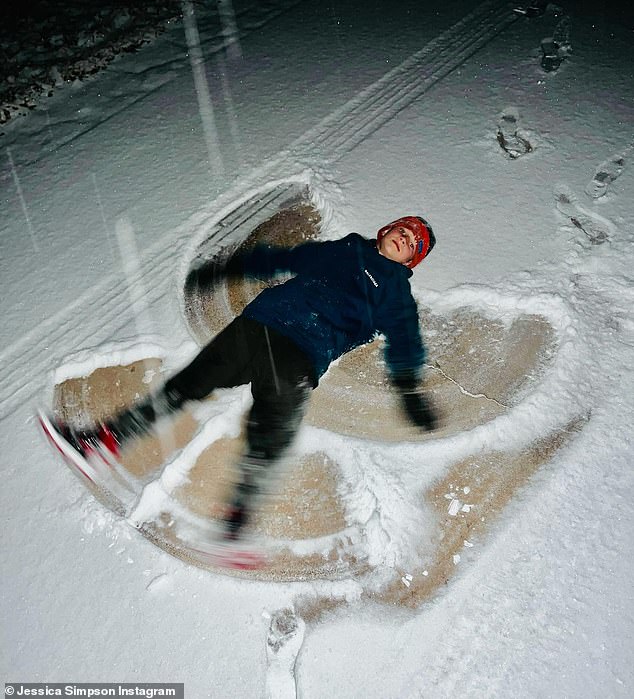 Wintery fun: One of the kids had fun creating a snow angel in the falling snow