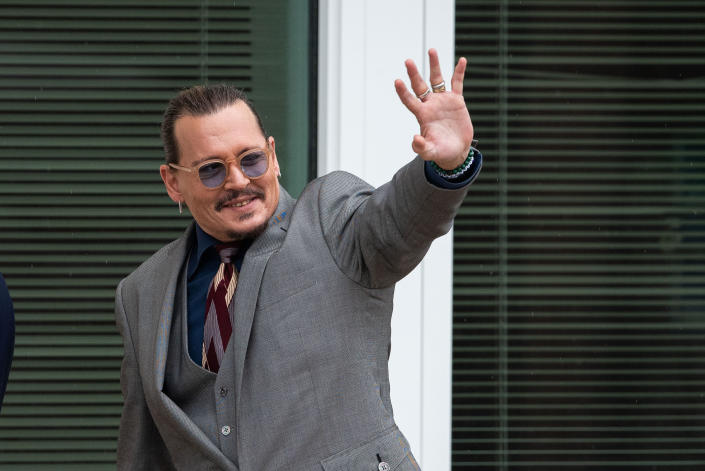 Johnny Depp will not return to the Pirates of the Caribbean franchise, despite his name reportedly seen on a call sheet for a new movie in the film series.

During his defamation trial against ex-wife Amber Heard earlier this year, Depp declared that he wouldn't work with Disney on another Pirates movie because he felt betrayed by the studio over the way they responded to his legal problems.

However, rumours began to circulate he would reprise his role as Captain Jack Sparrow after The Sun published a report on Wednesday.

This report was swiftly debunked by sources speaking to DailyMail.com and the New York Post. The sources insisted the information was false.

Depp, 59, last portrayed the swashbuckling character in 2017's Pirates of the Caribbean: Dead Men Tell No Tales, before producers decided to go in a different direction with the film franchise.

A source told The Sun a sixth instalment in the franchise was in the works with the working title A Day At The Sea.

According to the source, Johnny was “set to return as Captain Jack Sparrow and scheduled to start filming at the beginning of February at a top-secret location in the UK”.

The source continued: “A call sheet has been distributed among those in the know. Bruce Hendricks, who worked on the first three films, is named as the Executive Producer on the new project.”

While Depp will not be doing another Pirates of the Caribbean film, it was recently announced he would be directing his first film in 25 years. The father-of-two will direct Modigliani, a biopic about Italian painter and sculptor Amedeo Modigliani.

Tragic Guardians of the Galaxy Vol. 3 death might have leaked

Appreciation: How ‘Cheers’ stars Kirstie Alley and Ted Danson made one of TV’s most iconic pairings

Avatar is back after 13 years - but will the sequel live up to the original?

When will NASA Artemis I Orion return to Earth?

The Great British Bake Off: Matt Lucas 'passing the baguette' on to someone else as he leaves TV show

Apple’s car delayed to 2026, won’t have full self-driving at launch

Read Matt Lucas’s statement on quitting Bake Off – in full

Bill Cosby is facing more legal turmoil for alleged sexual assault, more than a year after he was freed from prison in 2021. In a lawsuit filed Monday in New York state court, five women — including “Cosby Show” actors Lili Bernard and Eden Tirl — claimed they were ...

If you live in Los Angeles, you’ve probably sped past La Luz del Mundo church, an ornate, 9,600-square foot outpost of the Mexico-based evangelical megachurch hard by the 60 Freeway in East Los Angeles. Founded in 1926, the Christian denomination claims to havemore than 5 million followers in approximately 50 ...


View more: A plea deal ‘buried’ the abuse at a Mexican megachurch. A new doc hopes to unearth it

Avatar: The Way of Water was finally unveiled to some members of the media on Tuesday as the film premiered in London. The Avatar sequel comes 13 years after James Cameron’s original record-breaking epic and if the first reviews are anything to go by, fans will feel it was worth ...

The Great British Bake Off: Six presenters who could replace Matt Lucas as host

Matt Lucas’ time in the tent is over. The Little Britain star announced Tuesday (6 December) that he was stepping down as one half of the hosting team on Channel 4’s The Great British Bake Off. While fans have expressed their sadness at the comedian’s decision to move on, ...


View more: The Great British Bake Off: Six presenters who could replace Matt Lucas as host

Kevin Alejandro shifts into his “player/manager” mode for Friday night’s fall finale of “Fire Country” on CBS. The veteran actor (“Lucifer,” “True Blood,” “Southland”) — who co-stars on the hit freshman series about convicts training as firefighters — also directed the episode (9 p.m.), in which his character, Cal Fire ...

JBL has a long history of delivering high-end, great-sounding headsets, and in recent years it has built many of the best wireless earbuds out there. Now, the company is back with a fresh pair that are specifically targeted at gaming, in the JBL Quantum TWS wireless earbuds. Earbuds aren’t commonly ...

Indonesia set to criminalize sex, cohabitation before marriage for citizens and tourists

Indonesia is on track to outlaw sex and cohabitation outside of marriage with penalties of up to a year in prison, according to government officials. The new criminal code, which would apply to both citizens and foreigners, is expected to pass on Dec. 15 or as early as this ...

Yipee-ki-yay, Santa: Why is Die Hard a Christmas classic?

‘Abbott Elementary' Leads Critics Choice Awards Noms: Find Out Who Else Got Noticed

Sigourney Weaver: New Avatar is ‘safe’ way to return to being a teenager

Vanna White on retiring: ‘Weird having somebody else turn my letters’

Ryan Reynolds: Family gives me more strength than any man could possibly deserve

‘Your chemistry with Noel was brilliant’: Bake Off viewers react after Matt Lucas announces shock exit

2022 People's Choice Awards: Why Ryan Reynolds Is Grateful for His Slow Rise to Fame

‘Cheers’ co-stars salute Kirstie Alley: ‘Grateful for all the times she made me laugh’

10 of the most eyebrow-raising moments in Matt Hancock’s book, The Pandemic Diaries

Apple Music offers a chance to sing with your favorites

Arctic Monkeys at NOS Alive 2023: How to get tickets

The 5 best movie trilogies ever

Elegance Bratton mines his troubled youth for ‘The Inspection’

Brendan Fraser is back. But to him, 'I was never far away'

The best Christmas films of the 21st century

Star Wars Machete Order: How to watch the Star Wars movies in order