They had produced only one touchdown on their previous 20 second-half possessions, an arid stretch covering four games.

But now here the Chargers were, having finally scored a late touchdown, lining up to attempt to reach the end zone two plays in a row.

“That’s us,” safety Derwin James Jr. said. “That’s our mindset. We believe in 10 and you seen what he did.”

Justin Herbert, No. 10 for the Chargers, hit tight end Gerald Everett for a two-point conversion moments after connecting with Austin Ekeler on a one-yard touchdown pass, lifting the Chargers to a 25-24 victory over Arizona.

In the frantic span of two snaps in the game’s final 20 seconds, the Chargers brushed aside their recent second-half offensive woes, stopped their two-game losing streak and breathed belief into their playoff chances. 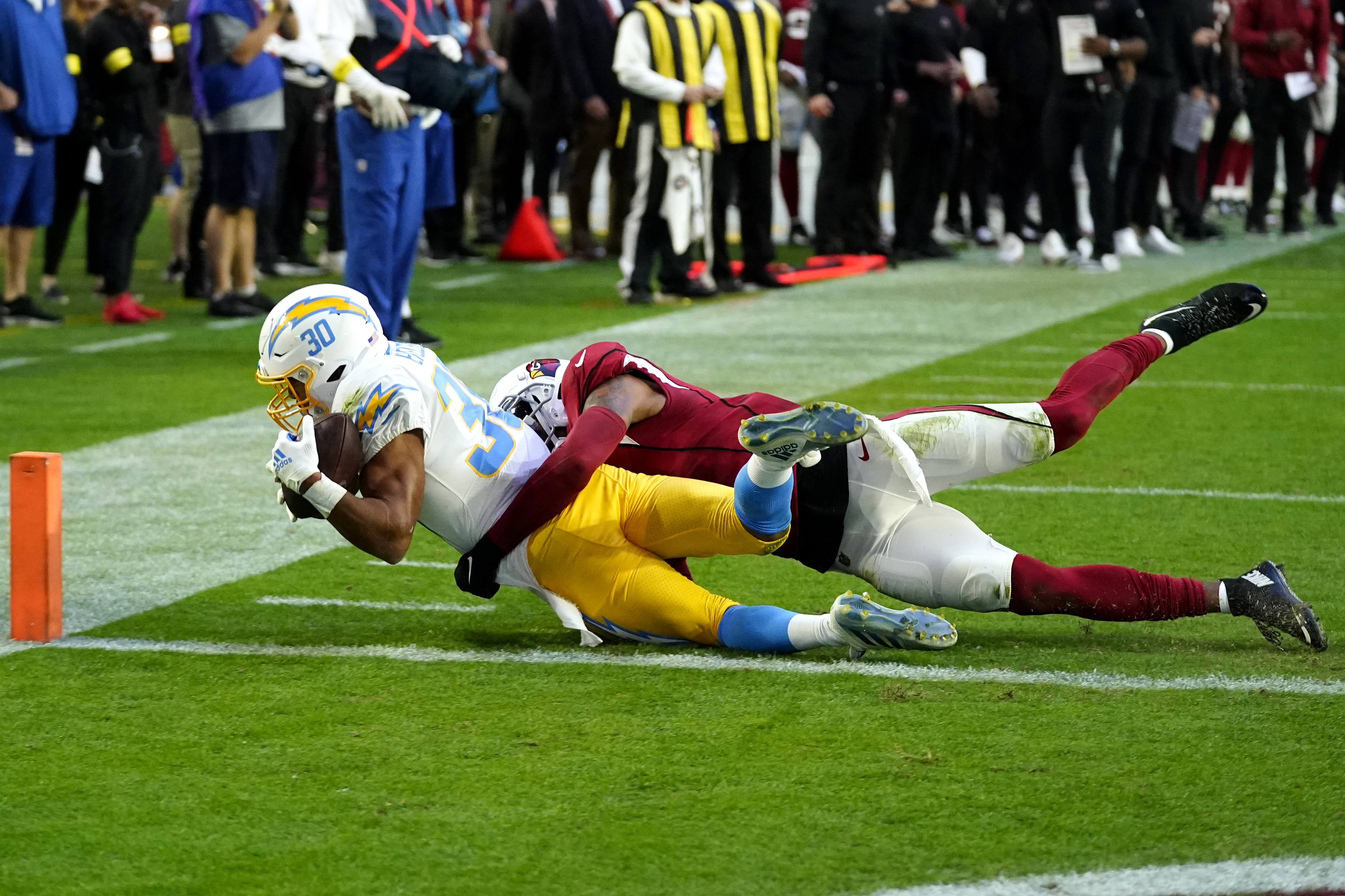 The Chargers, who had lost three of four overall, improved to 6-5, the same record as New England. They sit one game behind Cincinnati and the New York Jets, the teams that currently occupy the AFC’s last two postseason spots.

Their prospects appeared much bleaker at State Farm Stadium as Sunday afternoon grew long. The Chargers trailed 24-17 from early in the fourth quarter and their offense looked almost powerless to alter their encroaching fate.

After struggling to stop the Cardinals on the ground and contain a scrambling Kyler Murray, the Chargers’ defenders forced three consecutive three and outs in the fourth quarter.

The offense failed to capitalize on the first two stops, netting only three first downs and 27 yards on 11 plays as Arizona continued its game-long pressuring of Herbert with its blitzing.

The third three and out left the Cardinals punting from their 13-yard line. Andy Lee booted the ball 50 yards, and DeAndre Carter brought it back 20 — his longest punt return of the season.

An additional penalty on Arizona gave the Chargers possession on the Cardinals’ 38 with 1:48 remaining.

In the previous two games — losses against San Francisco and Kansas City — Herbert needed more real estate and had less time to produce game-winning drives. Both possessions ended with interceptions.

“That’s what it’s like when you’re a quarterback in the NFL,” Chargers coach Brandon Staley said. “You’re not going to make every two-minute drive. But the thing that he has going for him is that our entire organization believes he’s going to make it.”

And Herbert did this time. He completed six of seven passes for 48 yards, the Chargers overcoming a holding penalty on rookie right guard Zion Johnson along the way.

They also converted a third and seven when Herbert, having identified Arizona’s intentions, checked to a screen pass that Ekeler turned into a 10-yard gain down to the one-yard line.

“Early in his career, I don’t think he would have been able to do that or see that,” Ekeler said. “It’s just really cool to see him maturing as a football player and one of the leaders on this team.”

On the snap after the screen pass, a desperate and lunging Ekeler barely squeezed into the front corner of the end zone, bringing the Chargers to within 24-23 with 15 seconds left.

By that point, Staley knew the Chargers would be going for two if they scored. He explained that he made the decision after the offense had picked up two first downs and the clock had ticked below 40 seconds.

“I really believe in our offensive football team,” Staley said. “I believe in our quarterback. I believed in our play call. We executed it well the entire week. I felt like it would have good answers against the defenses they might play.” 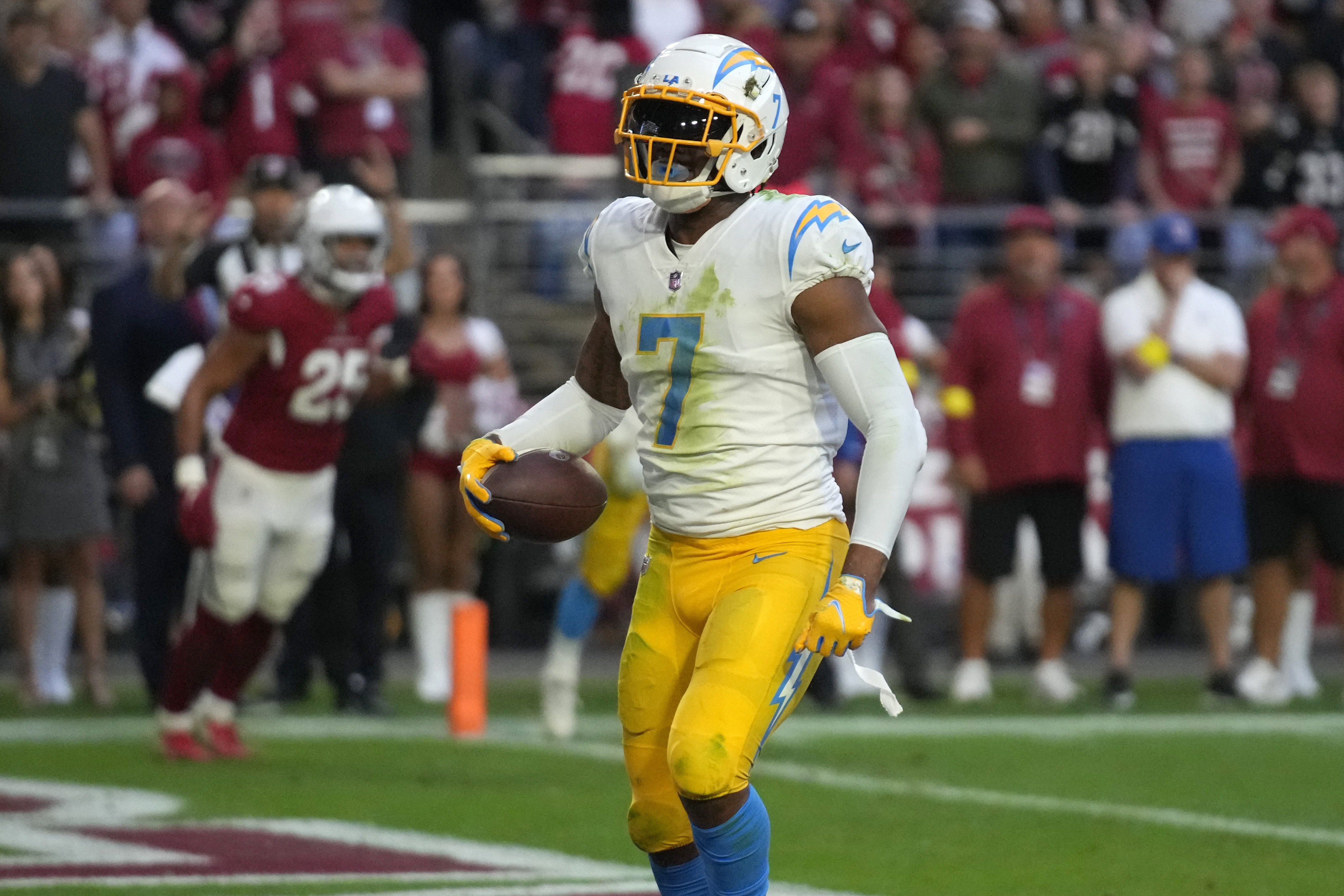 Lined up on the right side of the formation, Everett started to his right before planting hard and darting back inside. Running a route in the same area and just ahead of Everett, Keenan Allen helped clear space for the tight end.

Herbert hit an open Everett in the chest for what turned out to be a relatively routine-looking conversion.

That the Chargers executed the way they did when it mattered most was further heightened by the in-game losses of center Corey Linsley and right tackle Trey Pipkins III.

Linsley went out in the second quarter after suffering a concussion and Pipkins couldn’t finish the game because of a knee injury he has been dealing with for several weeks.

Herbert finished 35 of 47 for 274 yards and three touchdowns, his first two scoring tosses going to Allen and Carter as the Chargers came back from an early 10-0 deficit.

“The way Justin played today is what makes him so special,” Staley said. “I thought he made a lot of winning plays on that two-minute drive, a lot of big plays. … When we really needed him in the clutch, he delivered.”