South Africa maintained their stranglehold on the first Test at Lord’s by bowling England out for 165 on the second morning, with Kagiso Rabada claiming an impressive five-wicket haul. 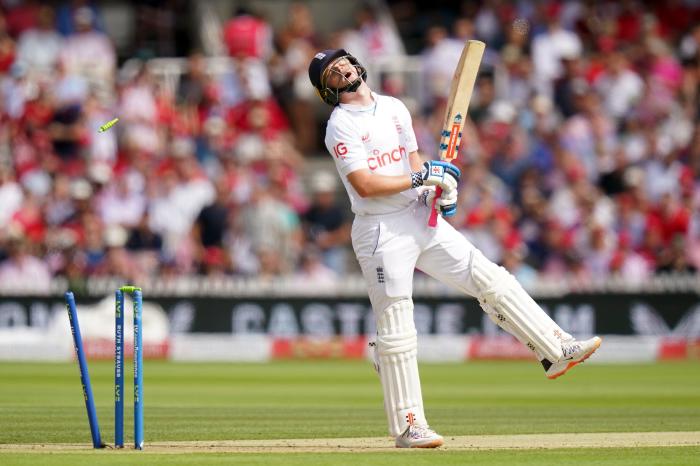 Rain halted the tourists’ charge on day one with England struggling to 116 for six and on the verge of posting their lowest total since the new regime of Ben Stokes and Brendon McCullum set about transforming red-ball cricket in this country.

While the hosts moved beyond the 141 they scored here against New Zealand in June, Rabada sent Ollie Pope back to the pavilion early and picked up five for 52 to bring England’s first innings to an end inside an hour on day two.

Lord’s was a sea of red with the home of cricket turning ‘Red for Ruth’ for the fourth successive year in memory of Sir Andrew Strauss’ wife Ruth, who died in 2018.

All eyes were on Pope first up and whether he could lead England to a competitive total when he resumed on 61 not out, but he should have been dismissed from the sixth ball of the morning.

Having confidently pulled Rabada for four earlier in the over, Pope edged to first slip only to watch Sarel Erwee make a mess of the catching opportunity at chest height.

Erwee spilled the first chance, almost clung onto the second and failed to gather at the third attempt in hilarious fashion while falling backwards.

Pope did not cash in though as he played on at the start of Rabada’s third over to depart having added 12 runs to his overnight total.

Stuart Broad, lined up for a nighthawk role by captain Stokes during last month’s Test with India, did briefly live up to his billing with two fours off Anrich Nortje able to take England past the 141 they managed here in June.

Rabada again proved too good and showed his variation with a slower ball fooling the England number eight, who could only chip a simple catch to the tourists’ skipper Dean Elgar at point. 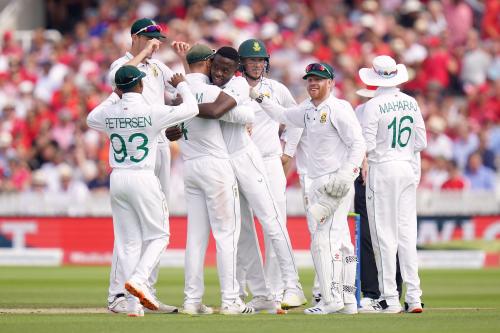 Jack Leach followed team orders in trying to be aggressive and welcomed Marco Jansen into the attack with two boundaries but soon lost his off stump.

It meant James Anderson, fresh from celebrating his 40th birthday, walked out with England on 164 for nine.

Anderson lasted only one ball with Rabada pinning him in front to ensure his name will go up on the Lord’s honours board and give South Africa control.

Column: No matter what happens in the midterms, Republicans won’t correct their troubling trajectory

The best beaches in Tuscany

TikTok community is embracing small businesses in the UK

Phil Read dead at 83: Seven-time motorcycle GP world champion and ‘Prince of Speed’ passes away as tributes pour in

The most scenic drives in Tuscany

Binance said a cross-chain bridge linking with its BNB Chain was targeted, enabling hackers to move BNB tokens off the network. In total, hackers withdrew 2 million BNB tokens — about $570 million at current prices — from BNB Chain said in a blog post on Friday. An earlier ...

Jessica Alves puts on a VERY leggy display in a pink feathered mini dress and totes a £6,000 Chanel bag as she heads to dinner in Brazil

Jessica Alves looked nothing short of sensational as she stepped out to dinner in Brazil on Thursday evening. The TV personality, 39, put on a very leggy display in a hot pink mini dress which  was adorned with a feathered trim. The reality star showed off her curvy figure in the ...


View more: Jessica Alves puts on a VERY leggy display in a pink feathered mini dress and totes a £6,000 Chanel bag as she heads to dinner in Brazil

'I look like a hardboiled egg!': Nicola Peltz jokes about her new look after embracing the bleached eyebrow trend in a hysterical post

She recently squashed rumours of tensions with her famous in-laws, David and Victoria Beckham. And Nicola Peltz, 27, took to Instagram on Thursday to joke about her brand new look after bleaching her eyebrows for Paris Fashion Week. The socialite, who is married to Brooklyn Beckham, 23,  shared snaps without ...


View more: 'I look like a hardboiled egg!': Nicola Peltz jokes about her new look after embracing the bleached eyebrow trend in a hysterical post

Chelsea receive a huge fitness boost with Wesley Fofana's knee injury not as serious as first feared, with £70m star set to miss around four weeks after picking up problem in win over AC Milan

Wesley Fofana's midweek knee injury isn't as serious as first feared by Chelsea The French central defender is likely to only be missing for a month with injury He'll miss games against AC Milan, Manchester United and Brentford in OctoberFofana scored the opening in win over Milan but was subbed before half time


View more: Chelsea receive a huge fitness boost with Wesley Fofana's knee injury not as serious as first feared, with £70m star set to miss around four weeks after picking up problem in win over AC Milan

Watchdog groups fear the film will fuel chaos in the upcoming midterm elections and could be a pretext for more restrictive voting laws in the future.

How to watch World Cup 2022 in the United States


View more: How to watch World Cup 2022 in the United States

Experts say Trump, election deniers eroding trust in democracy. Can it be restored?

Hull's move to appoint Pedro Martins as their new manager is set to collapse following late concerns from the former Olympiacos boss... with Andy Dawson likely to remain in charge for Sunday's trip to Huddersfield

'He's a clean athlete!': Emotional Nigel Benn insists he and Conor are in 'total shock' after this weekend's clash against Chris Eubank Jr was axed following his son's failed drugs test, as he vows to 'get to the bottom of this'

Horse racing – Ladbrokes FREE BETS: Get £20 bonus when you stake £5 on racing

The best things to do in Tuscany