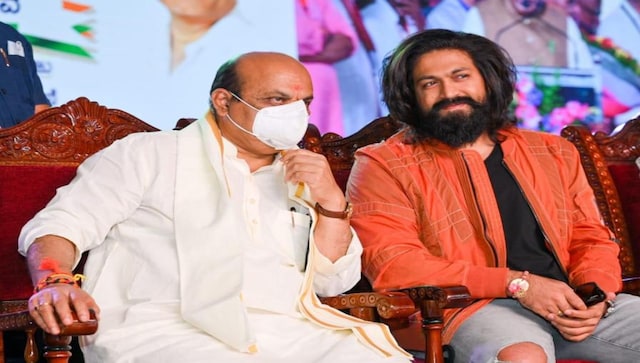 The stardom of Rocking Star Yash has been constantly touching new skies with time. The star has not only given a whole new definition of stardom but he also cemented his name on the list of favorite superstars of the audience which has just taken to the next level post the release of KGF Chapter 2. The success of the second chapter of KGF is well explained with its release itself when the film booked the biggest opening at the box office. Recently while celebrating 75th Independence Day, Rocking Star Yash was seen with Karnataka Chief Minister at a Youth Festival organized by the University of Mysuru as part of Azadi Ka Amrut Mahotsav.

Moreover, the rise of Yash’s stardom was seen when he attended the opening of ‘Yuvajana Mahotsava’ (Youth Festival) at the Maharaja College Grounds in Mysore. The actor was seen having a chat with the Karnataka CM Basavaraj Bommai, who was present there to inaugurate the event. The actor also gave a speech to the students where he spoke about his student life and how he feels immense love to interact with the students of this generation. The actor also motivated the students about fine-tuning little things in life which lead to bigger results. The superstar also mentioned the importance of self-confidence and how he takes immense pride in the Kannada film industry for the kind of respect it is garnering all across the nation and worldwide. Such speech from the star added an extra star to his raging stardom which shows he deserves it all where he is today.

Other than this, the star is also entitled widely as Rocky Bhai all around the corners post the release of his blockbuster, KGF. The film set a benchmark with its success when it crossed the figure of 900 Cr. In the domestic market and doing business of around 27 million dollars in the International market. While other than this, even on the OTT platform the film is also earning a lot of love from the masses.

Jalyn Hall as Emmett Till and Danielle Deadwyler as Mamie Till Mobley in TILL. Lynsey Weatherspoon/Orion Pictures EXCLUSIVE: Barbara Broccoli, one of the teams of producers behind the powerhouse film Till, about the extraordinary efforts of Maimie Till Mobley to find justice after the lynching of her 14-year-old son ...


View more: Barbara Broccoli On Powerful Movie ‘Till’: “This Is Not A Time For Us To Look Away” – New York Film Festival

Bills linebacker Matt Milano didn’t receive a fine for the illegal hit on Sunday that started Tua Tagovailoa’s string of injuries this past week. Milano was penalized with roughing a passer during the Bills’ 21-19 loss against the Dolphins last Sunday for tackling Tagovailoa after he released the ball. The ...

TORONTO – Catcher Danny Jansen was a triple short of hitting for the cycle to lead the Toronto Blue Jays to a 10-0 victory over the Boston Red Sox on Saturday afternoon. Jansen had a single, double, and home run, driving in a total of five runs as the Blue ...


View more: Jansen a triple short of the cycle in Jays win

Getty Images For the Los Angeles Angels, 2023 will bring one more year of “Sho-Time.” Shohei Ohtani and the Los Angeles Angels have agreed on a $30 million contract for the 2023 season, the largest salary ever for an arbitration-eligible player. He surpassd the $27 million deal Dodger Mookie Bets signed ...

KABUL, Afghanistan —  A group of Afghan women Saturday protested a suicide bombing that killed or wounded dozens of students in a Shiite education center in the capital Kabul a day earlier, demanding better security from the Taliban-run government. The demonstration was quickly broken up by Taliban police. The bomber struck ...

20 notable songs with years in the title


View more: 20 notable songs with years in the title

O’Rourke and Abbott accused each other of bending the truth during the only planned gubernatorial debate on Friday. Many of their claims needed context and clarification.


View more: Gov. Greg Abbott and Beto O’Rourke accused each other of misinforming Texans during their debate. Here are the facts.

More Targaryen lore that House of the Dragon could explore

The new ‘Fab Four’: Royal portrait is a clear sign that King Charles' sovereignty will be more closely centred on the most senior members of the family

Owen Caissie on Cubs Winning Another Title: ‘We Can Do It Again'

Color-changing, bubblegum flavored vodka to launch in the UK

Shohei Ohtani gets record contract from Angels to avoid arbitration

T Bone Burnett’s NYC Tribute to Bob Dylan, With Sara Bareilles and Oscar Isaac Among the Cast, Is Worthy of a Bard: Concert Review