Kylian Mbappe blasts defending champion France into round of 16 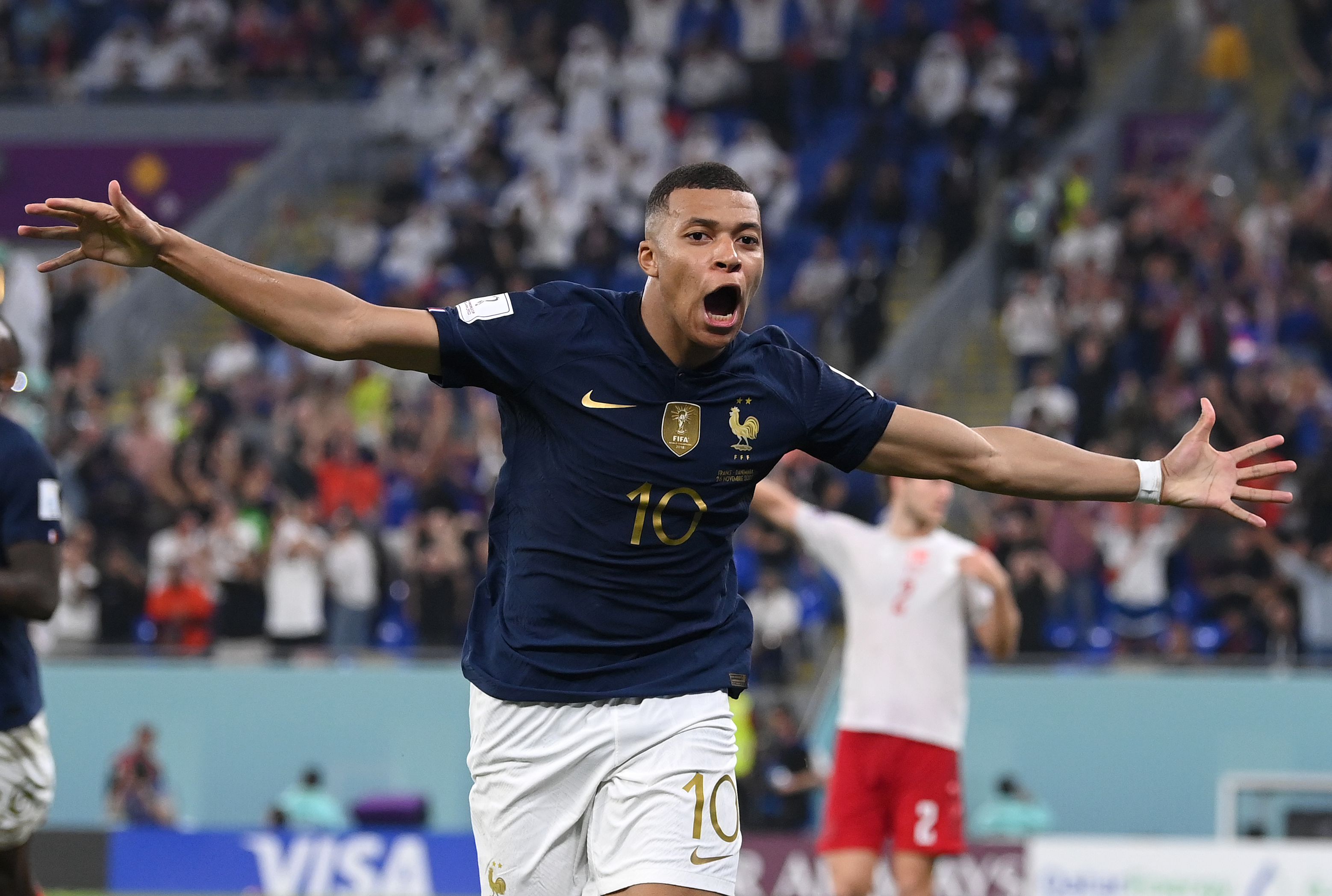 France striker Kylian Mbappe celebrates after scoring both goals in a 2-1 win over Denmark.

France advanced, and Kylian Mbappe got them there.

The French became the first defending champions to reach the round of 16 at the World Cup since Brazil in 2006, beating Denmark, 2-1, Saturday with Mbappe scoring both goals.

“Kylian is an extraordinary player. He has the ability to make the difference at any time no matter what the other team plans to contain him,” France coach Didier Deschamps said. “In addition to his great ability he is totally invested in the team and he’s made it an objective of his to win the World Cup.”

Mbappe put his team in front in the 61st minute and then scored the winner with his right thigh in the 86th as Les Bleus became the first team at this year’s tournament to advance from the group stage.

The France forward swapped passes with Theo Hernandez down the left flank and poked the ball past Denmark goalkeeper Kasper Schmeichel for the first goal. He then jumped acrobatically to guide in the second after a cross from Antoine Griezmann — who adapted well in a midfield role and provided his 26th assist for the national team.

Mbappe scored four goals when France won the World Cup four years ago, including one in the final. He now has 31 goals for France, moving him one ahead of Just Fontaine — the all-time leading scorer at a single World Cup with 13 goals at the 1958 tournament.

He joined another France great, playmaker Zinedine Zidane, with 31 goals. Zidane scored twice in the final when France won its first World Cup against Brazil in 1998 and one goal when Les Bleus lost in the 2006 final to Italy on penalty kicks.

Lewandowski shed tears after scoring in the 82nd minute. He raced toward the corner with his arms outstretched, then stayed slumped on the field as teammates rushed to congratulate him. He got up, rubbed his face, and blew a kiss to the crowd.

“Today everything I had inside, the dreams, the importance of the occasion, all those dreams from my childhood came through,” Lewandowski said. “It was so significant.”

One of the best forwards in the world, Lewandowski’s barren streak at the World Cup was somewhat puzzling. Now, in his fifth match at the tournament, it’s over.

“I always wanted to score at the World Cup and this dream came true,” said Lewandowski, who had a penalty saved in Poland’s 0-0 draw with Mexico on Tuesday. “It’s not easy, because we didn’t have many opportunities in the first match and I missed that penalty.”

Neymar is planning a World Cup comeback despite posting a photo of his ankle still looking very swollen on Saturday.

Neymar is undergoing treatment for damaged ligaments in his right ankle after getting hurt in Brazil’s 2-0 opening win over Serbia on Thursday. Team doctors said Neymar will miss Monday’s match against Switzerland but did not elaborate on a timetable for his return — or say whether he will be able to return at all.

Neymar wrote on Instagram he was enduring “one of the most difficult moments” of his career, but seemed optimistic about his chances of returning. He showed two photos of his swollen ankle in an Instagram story.

“I’m injured, yes, and it’s a pain, and it will hurt,” he said. “But I’m sure that I’ll have the chance to return, because I’ll do anything possible to help my country, my teammates, and myself.”

It was an emotion-filled day for Australia, which beat Tunisia 1-0 for only its third win in 18 World Cup matches. Mitchell Duke gave Australia the lead midway through the first half with a header. Australia hadn’t won at the World Cup since beating Serbia in 2010 and it means the Socceroos still have a chance to qualify for the round of 16, despite losing to defending champion France, 4-1, in their opening match . . . More crosses are creating more goals. FIFA’s expert analysts picked their World Cup trends Saturday from the first 16 games after each team played once. What the Technical Study Group saw was more and better crosses bearing fruit with a big increase in the number of goals — 14 instead of three — coming from wide areas compared to the 2018 tournament at the same stage. The nine penalty kicks awarded in the first 16 games put this World Cup on track for a record 36 in the entire 64-game tournament. There were 29 given by referees in 2018 when they first had video reviews . . . The Serbian soccer federation was charged by FIFA for hanging a political banner about neighboring independent state Kosovo in the locker room before playing Brazil. It showed a map of Serbia that included the territory of its former province, which has been an independent state for nearly 15 years, and the slogan “No Surrender.” Photos circulated of the banner draped over the lockers of Miloš Veljković and Andrija Živković ahead of the team’s 2-0 loss to Brazil on Thursday.