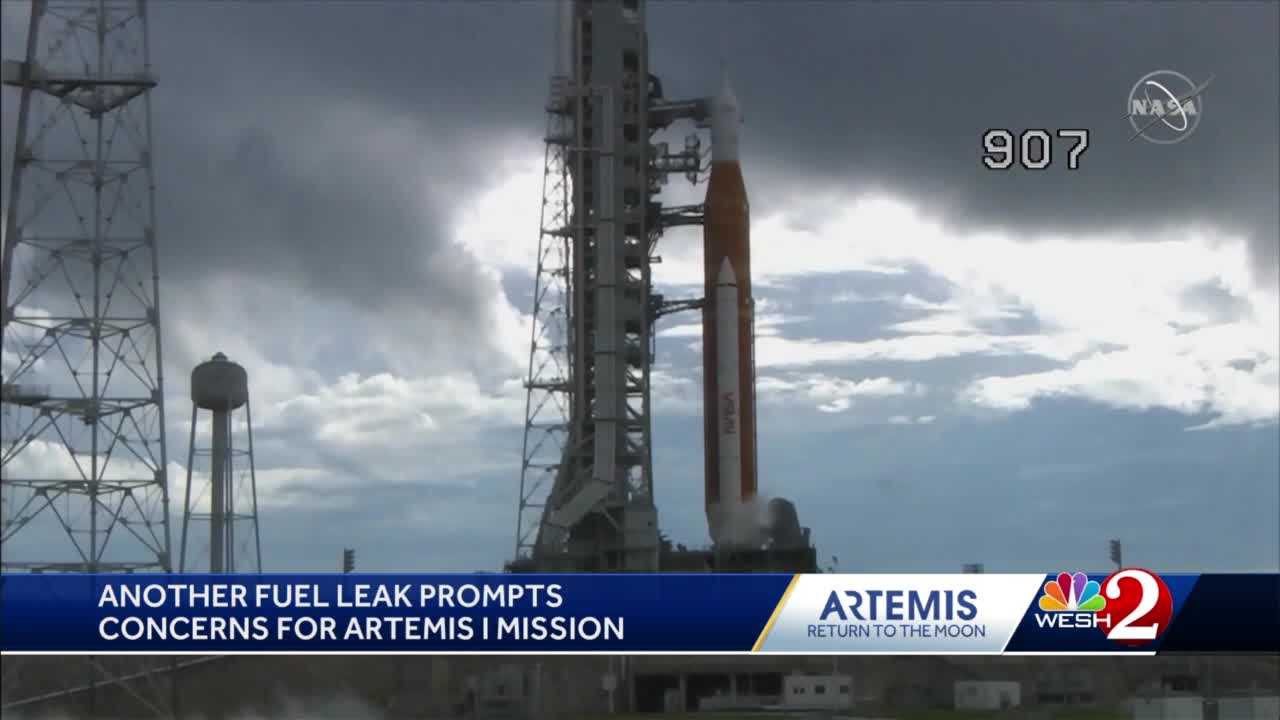 NASA engineers hit a snag Wednesday morning during the test tanking of the Artemis I SLS rocket. But they were able to fix a leak and push forward.

Just after 10 a.m. on Wednesday morning, a few hours into the test tanking process, a hydrogen leak was detected. It was very similar to what happened on the last launch attempt on Sept. 3. It happened at the same time in the tanking process too.

“We are in stop flow. For the liquid hydrogen side,” a NASA official said. “They did have the detection of a hydrogen leak in the tail service mast umbilical. It’s in the lower portion of the rocket.”

The launch team was transitioning from slow fill to fast fill of the supercooled liquid hydrogen.

The problem areas are the plates called the Quick Disconnect that hold the fuel lines, which go from the source into the SLS rocket’s core stage. They fall back just before launch.

So the engineers used a tactic attempted back on Sept. 3, allowing the Quick Disconnect to warm up, prompting the gap and causing the leak to “reseat.”

After lowering the pressure, it worked. There’s still a slight leak but within safety limits. That allowed the test to continue.

They filled both supercooled hydrogen and oxygen tanks in the core stage. It’s something they were not able to do on the last launch attempt.

NASA teams continue to pour through the data from this all-day test before seeing if the next launch attempt window, next Tuesday at 11:37 a.m., is still viable.

CHECK OUT WPTZ:Get the latest Plattsburgh and Burlington news of the day. See the stories making headlines, and get the latest weather report online, anytime.

Column: ‘We are in the presence of a saint’: A homeless man’s mission to feed L.A.'s cats and birds

Augustine Hurtado slept in, because as usual, he’d been up for two hours in the middle of the night feeding neighborhood cats. He popped his head out of his tent at about 10 a.m., and his Chihuahua mix Sparky appeared a moment later, both of them ready for another day ...


View more: Column: ‘We are in the presence of a saint’: A homeless man’s mission to feed L.A.'s cats and birds

Here are some strategies to survive inflation

With inflation soaring to levels unseen since the 1970s, families are grappling with higher prices for nearly everything. Basic strategies to survive inflation involve spending or saving less or earning more. If you’re retired, surviving inflation means using more of your savings — assuming that’s something that won’t leave ...


View more: Here are some strategies to survive inflation

By Tom Boggioni Judge Aileen Cannon, Donald Trump (Court photo, Trump photo via AFP) In a column for Slate, former federal prosecutor Robert Katzberg made the case that U.S. District Judge Aileen Cannon’s continued interference in the work being done by special master Raymond Dearie in the matter of government ...

Report: Chelsea Have Verbal Agreement On Contract With Christopher Nkunku

The deal is moving fast for Christopher Nkunku, with Chelsea having a verbal agreement on the contract. View the original article to see embedded media. Chelsea are moving quickly in their pursuit of Christopher Nkunku after it was revealed by BILD that the club and the player had a secret ...

Serge Gnabry on the receiving end of a challenge from Leverkusen’s Piero Hincapié. Bayern Munich shook off their recent doldrums and drummed a stumbling Bayer Leverkusen team out of the Allianz Arena to the tune of 4-0 on Friday. It’s good times at Säbener Straße, and after all the ...

Man in custody after deadly shooting

Could this ‘attack-resistant’ glass stop the next school shooter?


View more: Could this ‘attack-resistant’ glass stop the next school shooter?

Proposal to house homeless in Boyle Heights Sears building is scaled back from 10,000 to 2,500 beds

The US Navy said 'traces' of jet fuel were found in the water on the aircraft carrier USS Nimitz. A sailor says the problem was way worse.