Letters to the Editor: The Constitution is flawed, but it works. Changing it invites upheaval 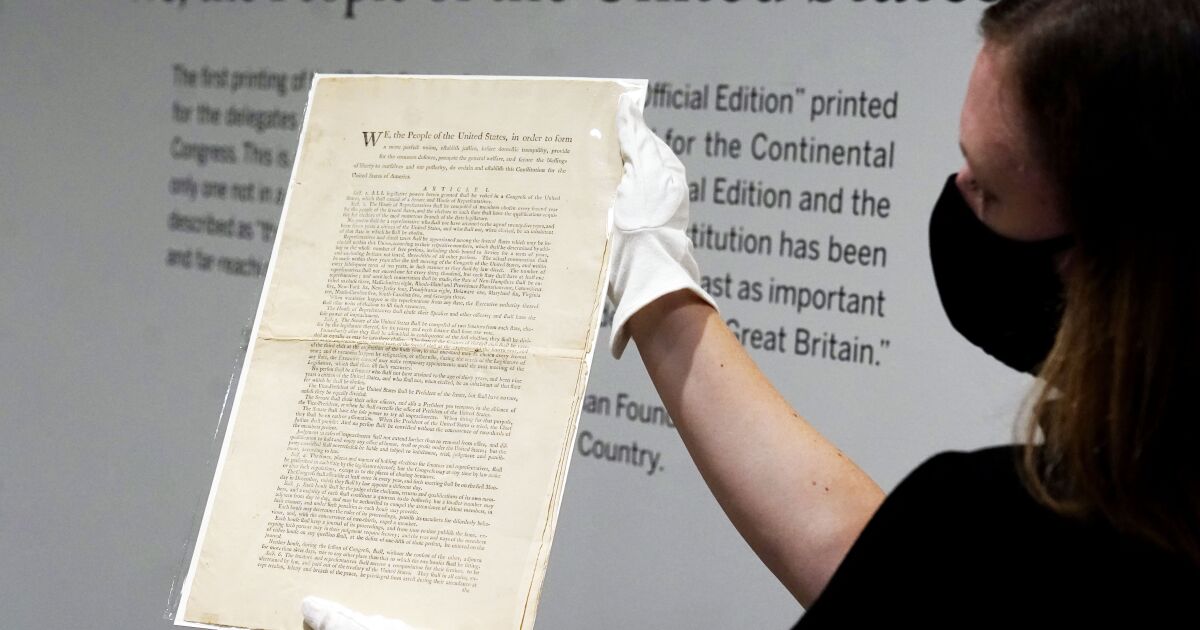 To the editor: I agree with columnist Nicholas Goldberg that holding a constitutional convention would be the wrong way to fix the flawed Constitution, particularly in our chaotic times.

I would go a step further. We should not be changing the Constitution, even when better times arrive.

The essence of our Constitution (and law in general) is not its inherent goodness, but its ability to maintain the social order. Successful societies of the past prospered with the creation of written laws, some of which we today see as absurd or unfair.

One can argue with Goldberg about whether giving tiny states the same number of senators as California or Texas is wrong, but we should be careful about making that into a Constitutional project. The framers knew what they were doing by making changing the Constitution very hard.

To the editor: Goldberg wonders whether his fear that a new constitutional convention could endanger the separation of church and state is a worst-case fantasy. It’s not. His fear is justified.

He further points out that delegates to such a convention would very likely be appointed by state Legislatures, the majority of which favor right-wing policies. A constitutional convention could rewrite or discard any provision of the Constitution.

The framers in the 1780s were far more determined to protect the equal rights of conscience of everyone, whether believer or nonbeliever, than the religious right wingers who would probably make up a majority of the delegates to a present-day convention.

Secular Americans never want more rights than anyone else. We just don’t want fewer rights. Can our religious right counterparts provide the same assurance of supporting equal rights for all?

The writer, an attorney, chairs the board of directors of the Center for Inquiry.

To the editor: Article V of the Constitution sets forth the mechanism of amending it and guarantees equal suffrage of the states that cannot be revoked without their permission. Thus, unfortunately, this undemocratic feature of the Senate effectively cannot be amended.

It’s also worth noting that it takes two-thirds of the House and Senate to propose an amendment, and three-fourths of the states to ratify it. Thus, eliminating the electoral college will not happen because there are more than enough small states to prevent ratification.

Lastly, the high bar to amend the Constitution would prevent the 2nd Amendment from ever being modified or eliminated. So sadly, there’s little to no chance of any of these reforms being enacted.

To the editor: I hate to disagree with Goldberg, but the changes he seeks to the Constitution would be a disaster.

First, abolishing the electoral college would let large states like New York and California effectively run the country, with no say from small states.

Second, if I don’t like the actions of the government and want to protest in the street, I should still be able to carry a gun without law enforcement taking it away.

How 'The English' Redefines the Classic Brooding Western Hero

Who is the referee for Brazil vs Switzerland on World Cup 2022 Group G matchday two?

4 new Philadelphia city councilmembers to be sworn in Monday

Brazil and Switzerland are both coming off World Cup-opening wins


View more: How to Watch Brazil Vs. Switzerland in 2022 World Cup

Niece of supreme leader asks world to cut ties with Iran The niece of Iran's supreme leader is calling for people to pressure their governments to cut ties with Tehran BAGHDAD — The niece of Iranian Supreme Leader Ayatollah Ali Khameni is calling on people to pressure their governments ...

OMAHA —  Nebraska agriculture officials say another 1.8 million chickens must be killed after bird flu was found on a farm, in the latest sign that an outbreak that has already prompted the slaughter of more than 50 million birds nationwide continues to spread. The Nebraska Department of Agriculture said Saturday ...

Vivica A. Fox Responds to Kanye West's Campaign Video Featuring Herself and Others

Treasury Yields Fall as Investors Look to Key Economic Data Releases for Hints About the State of the U.S. Economy

Dem. Sen. Murphy questions whether law enforcement should be funded in states that refuse to enforce gun laws

Letters to the Editor: She’s the retiring leader L.A. could use a lot more of

Letters to the Editor: Sheriff Alex Villanueva embarrassed himself again

All 15 Winter Olympics Sports: A Full List of 2022 Events

Op-Ed: Why an algorithm can never truly be ‘fair’

Joel Embiid-less Sixers flaunt tremendous depth with feat not seen in 36 years in win vs. Magic

The Houston boil water notice could also impact these places

St. Paul district settles for $120,000 with teacher who told reporter about legal concerns