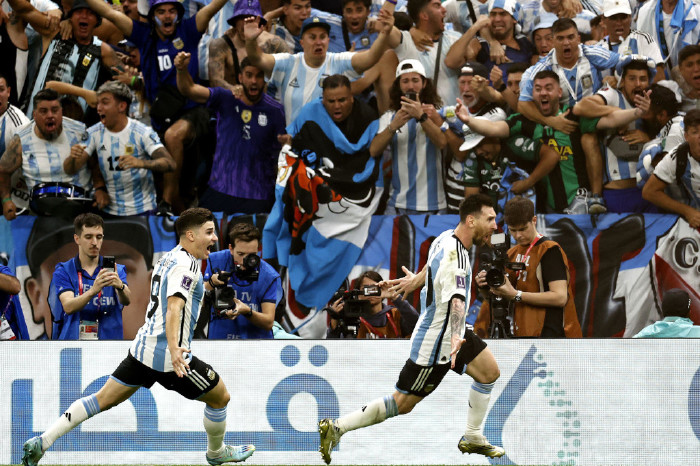 The South Americans, who were among the pre-tournament favourites, suffered a shock 2-1 loss to Saudi Arabia on Tuesday but brought themselves back into last-16 contention with victory at the Lusail Stadium.

Paris St Germain superstar Messi, at 35 playing in what is his fifth and surely final World Cup, ignited Argentina with a long-range strike 19 minutes into the second half, and Benfica midfielder Rodriguez made sure with a sublime curler three minutes from the end of normal time.

They still need a win over Poland to be certain of going through, but there were at least some signs of life from this team after the traumatic defeat they suffered here four days ago.

Argentina coach Lionel Scaloni made five changes from the Saudi shock but his side failed to spark in a disappointing first half littered with fouls.

It was a miracle it took until the 22nd minute for Italian referee Daniele Orsato to issue a first yellow card. Mexico’s Nestor Araujo was the recipient after raking his studs down the leg of Argentina left-back Marcos Acuna.

Manchester United defender Lisandro Martinez took a boot to the face from Mexico forward Hirving Lozano in a game lacking any real rhythm.

Mexico captain Andres Guardado, winning his national record-extending 179th cap, came off in the 41st minute for Erick Gutierrez who was given an appropriate welcome to the game when he was clattered by Argentina right-back Gonzalo Montiel.

El Tri almost punished the South Americans as Alexis Vega got the resulting free-kick up and over the wall, but it was well held by Aston Villa goalkeeper Emiliano Martinez.

Argentina finally found some fluency in their passing deep into first-half injury time as Di Maria and Messi linked up on the edge of the box and Acuna put in a dangerous sidefooted cross from the left, but Cesar Montes stuck out a leg to avert the danger.

The incessant fouling carried over into the second half as Gutierrez brought down Messi on the edge of the box. When Messi curled the free-kick high over the bar to jeers from his own fans behind the goal, it felt as though the game was up.

But the Argentina fans should have known not to doubt their hero.

Di Maria, wide on the right, spotted Messi in a pocket of space just outside the area in the 64th minute. It was more than enough room for him to pick his spot, low in the corner to Mexico goalkeeper Guillermo Ochoa’s left.

Substitute Enzo Fernandez wasted a glorious chance for a second, slicing wide after Acuna’s cross picked out his run, but more than made amends in the 87th minute.

Receiving the ball from Messi after a short corner, he beat Gutierrez with a stepover and curled a right-foot shot beyond Ochoa.

On the first 20 seconds of her first solo recording, “Walking in the Dark,” Julia Bullock sings: “When out of men’s hearts, hate is hurled / Maybe, baby, you’ll live in a better world.” She is unaccompanied. There isn’t a lot of emotion in the quietude of those 16 words ...


View more: Commentary: How Julia Bullock became an essential soprano for our times

CNBC’s Jim Cramer on Friday told investors to steer clear of stocks in the Nasdaq Composite and instead place their bets on names listed in the Dow Jones Industrial Average. The Nasdaq has climbed 11% this year, as investors have bet on less aggressive interest rate hikes from the ...

After an amazing run as head coach of Freestyle B.C.’s moguls team, Josh Kober of Penticton has landed the job of his dreams. The 28-year-old alumnus of the Apex Freestyle Club was selected last spring to take on the head coach role of the United States National Development Team. Now, ...

Memphis police officers punched, kicked and battered Tyre Nichols after pulling him over in a traffic stop, according to videos released Friday night by the City of Memphis. Nichols, a 29-year-old Black man, was stopped by several officers then held down, electrocuted with a Taser and pepper-sprayed, video shows. He ...

People with larger bodies are often discriminated against in the workplace, in their relationships and in health care settings, according to research from the University of Calgary. Now two actors who proudly call themselves fat are telling their stories of bias and acceptance in a play that explores the shame ...

Alicia Vikander in 2018’s “Tomb Raider” Everett Amazon Studios has tapped Phoebe Waller-Bridge to shepherd a potential Tomb Raider universe that would span television and film. According to source, both a TV series and a movie are in the works from the prolific Waller-Bridge, creator of Fleabag and Killing ...

Bournemouth call off £20.3m move for Villareal's winger Nicolas Jackson over hamstring injury concerns... but the Cherries confirm the capture of forward Antoine Semenyo for £10.5m from Bristol City

Pep Guardiola claims Man City's FA Cup win over Arsenal will have no bearing on the title race, noting that he expects Mikel Arteta's side to 'do something differently' after being eliminated

'Can I have your shirt?': Brazilian striker Richarlison makes cheeky request to Spurs team-mate Lucas Moura after watching the forward score for the Tottenham Under 21s on return from injury