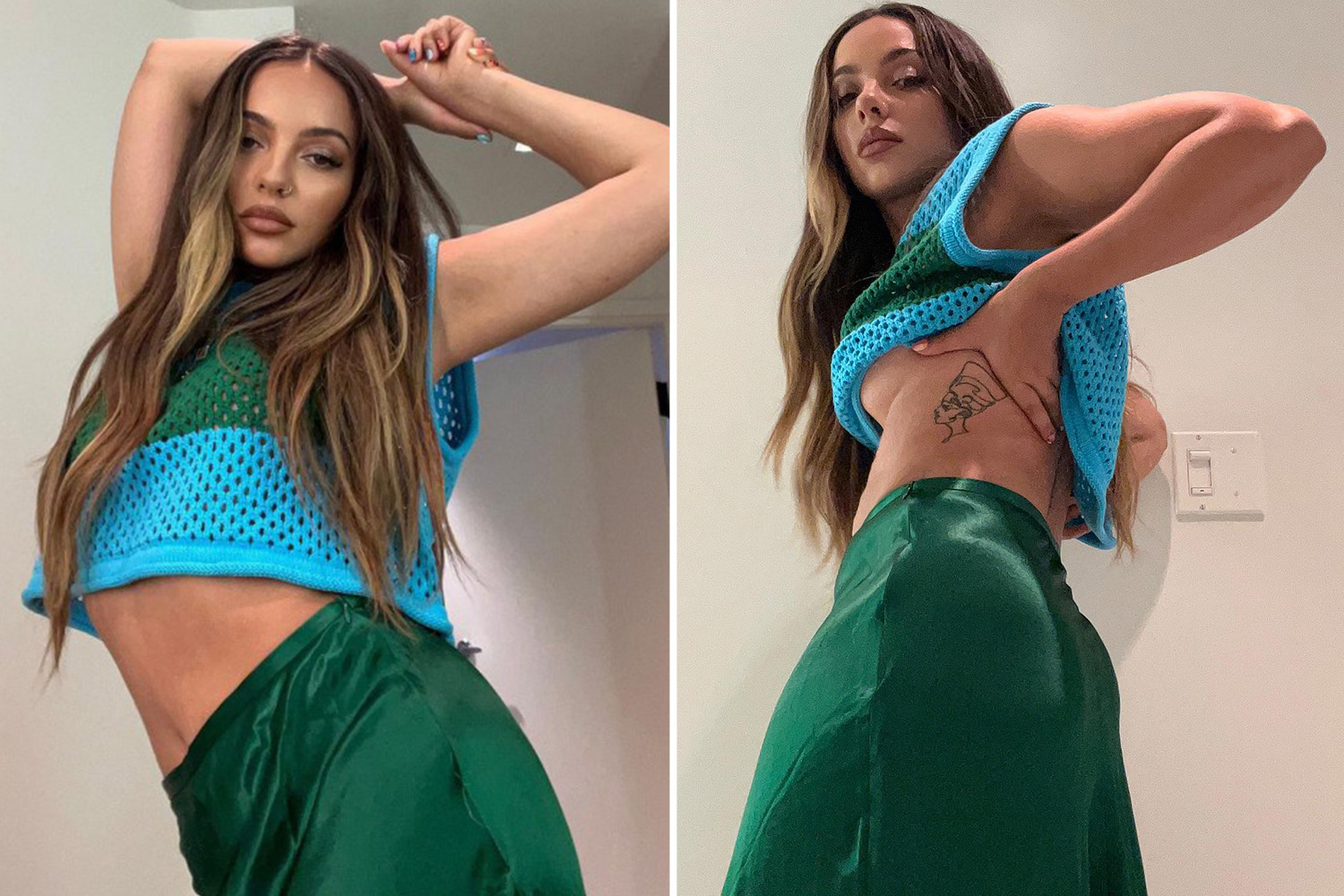 LITTLE Mix star Jade Thirlwall has shown off her new tattoo and flashed her underboob in sexy social media snaps.

The singer took to her Instagram grid to pose for the snap on Wednesday – showing off her toned midriff in a cropped crochet top. 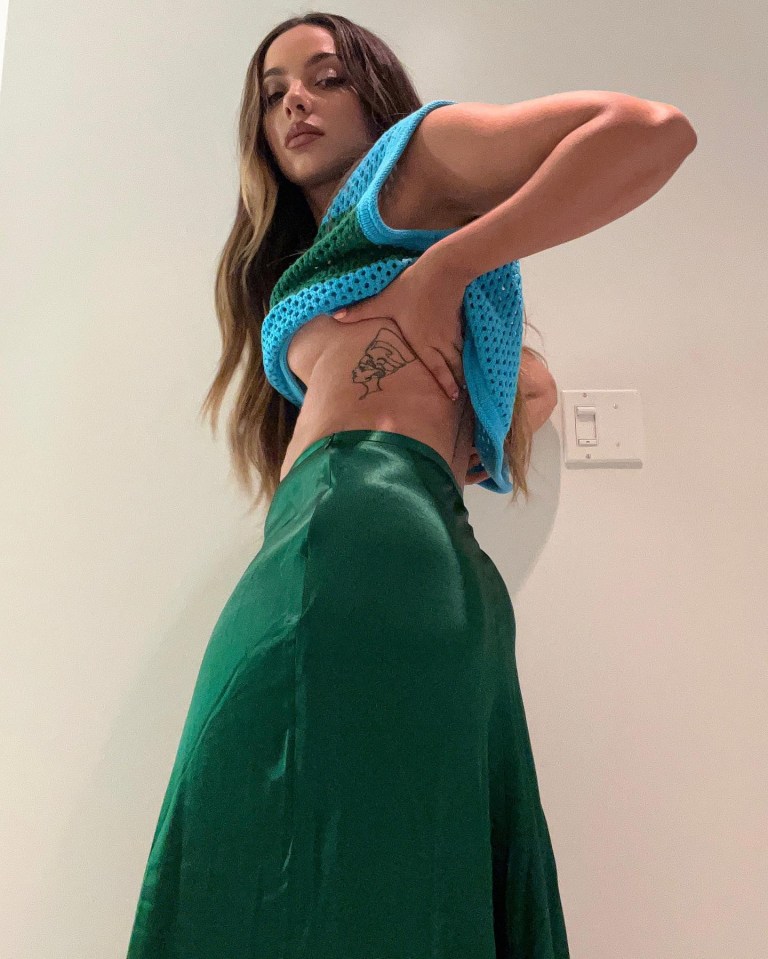 Jade showed off her unseen tattoo in the sultry snapCredit: Instagram 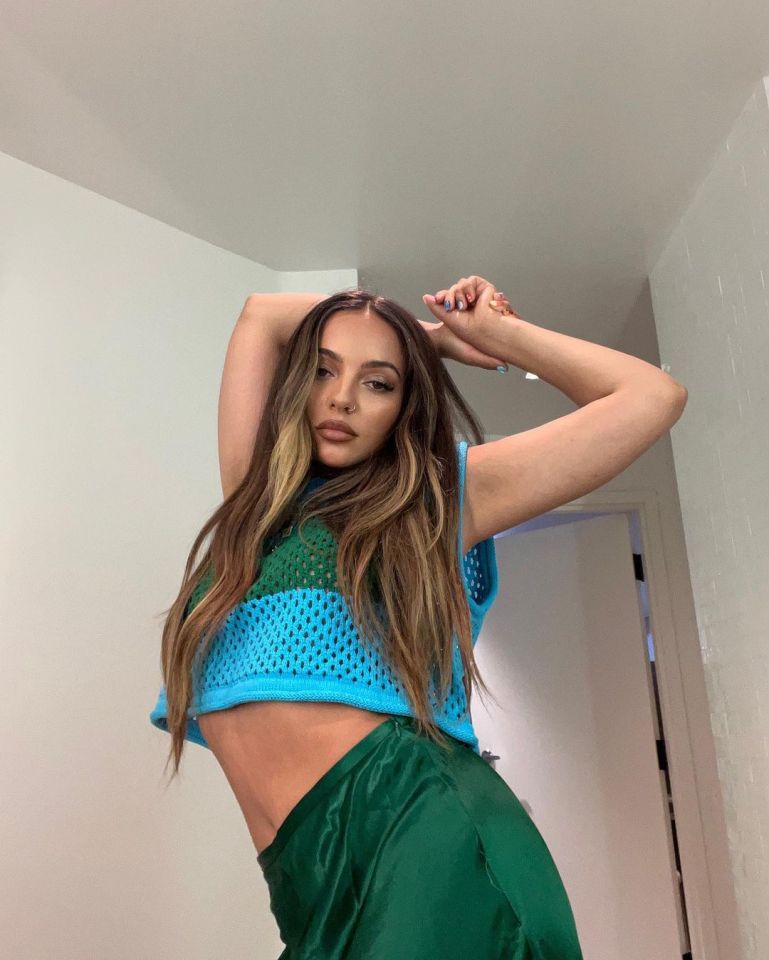 She struck a pout at the camera for the new series of snapsCredit: Instagram

Jade, 29, struck a sultry pout towards the camera as she raised her arms up above her head, before flashing her rib tattoo.

Looking glamorous in a green and clue crochet top and a silky green skirt, the singer let her brunette tresses flow down her chest.

Wearing a glamorous palette of make-up, including a dark lipstick, and a gold nose ring, she showed off her unseen inking.

“Jade Day. I exist, you're welcome,” she captioned the snap, as she lifted her top to reveal the tattoo, the head of an Egyptian Pharaoh.

Fans went wild over the series of snaps, which also saw her sit on the floor and show off her chequered black and white trainers.

It comes after Jade was spotted looking unrecognisable as she headed to the Mighty Hoopla festival in disguise in a blonde wig.

She later revealed how she had her phone stolen on holiday in Ibiza last month – as she took to Instagram to reveal the incident.

The Shout Out To My Ex singer told her 9.3million followers she enjoyed being without a device for a few days.

Alongside photos of from her holiday with boyfriend Jordan Stephens, Jade said: “Shoutout to whoever stole my phone.

“Not having one for a little while was truly bliss. Anyway, here’s me being a basic b***h in Ibiza a couple of weeks ago.”

On her flight home from the trip, Jade caused a stir online by sharing a video of a barefooted passenger on board her plane.

The singer's footage shows a foot with painted toenails stretching up towards the ceiling of the aircraft, in full view of the rest of the plane.

Responding to a comment left on the video, Thirlwall said she had been “a little rattled” by the sight, but that ultimately she was ok.

The video, shared via Tiktok, was posted with the witty title, “Breathtaking views at 38,000 feet” and has been seen almost 5 million times.

Many of her followers were disturbed by what they had seen, with one writing: “I would jump right off that flight.”

The latter half of Justin Bieber’s Justice World tour has been postponed again, but some fans are calling on the “Peaches” singer to just cancel the tour altogether. The tour “ended with Rock in Rio,” his Brazil show in early September, according to a statement Thursday on the Justice ...

David Hussey, executive director at El Camino Real Charter High School, went on the school public address system Tuesday morning and made an announcement that every school administrator dreads: the death of a student. Then he sent a letter to parents informing them that a 17-year-old had died of ...

Tulane 73, Louisiana-Lafayette 70 LAFAYETTE, La. — David Booker scored 26 points, including knocking down a big 3-pointer with 40 seconds left, to lead Tulane to a 73-70 win over Louisiana on Monday night. Booker, who finished 6 of 7 from long range, grabbed a pass that appeared to ...

Amazon first began field tests for Scout in 2019, on the streets around the company’s headquarters in Seattle. Amazon Amazon has powered down its fleet of home delivery robot “Scouts” following poor feedback from customers. The six-wheeled, cooler-size machines, designed to deliver packages to your front door, will be ...

A Dallas woman was shot to death by a sore-loser friend after she beat him in a basketball pickup game, according to her family. Asia Womack was gunned down Monday evening after she played hoops with the man at T.G. Terry Park near her home, Fox 4 News reported. “This ...

The ITV cameras are rolling at Newmarket and York as the Flat season draws to a close, and the Planet Sport tipsters have a hot selection for each of the seven races on Saturday, October 8.

She closed at least one case — her own! A fugitive wanted for fraud was busted when she walked into a New Jersey sheriff’s office and asked to be hired, according to police. Zyeama Johnson, 27, a former Postal Service worker from Jersey City, was on the run for the crime in ...

Covid: UK regions with highest number of infections at end of September according to ONS - as cases rise

continued to rise across England at the end of September, with southern regions now catching up with the North, the latest official figures show. Data from the Office for National Statistics (ONS) found that the percentage of people testing positive for Covid continued to increase in England, and increased in ...


View more: Covid: UK regions with highest number of infections at end of September according to ONS - as cases rise

Shakira sits apart from Gerard Piqué as they cheer on son Milan, nine, at his baseball game after she appeared to blast her ex in songs after cheating scandal

This Company Wants to Pay You to Travel Around Australia, New Zealand in a Campervan

Giants' Daniel Jones Without Game Status, Will Start Vs. Packers in London

Why Chicago PD Fans Are Holding Out Hope Despite Halstead's Exit

Inside look at the 2022 New York Comic Con