Nicola Sturgeon and Liz Truss’s relationship hasn’t got off to the best of starts with the pair trading insults over the last couple of months. The First Minister and the new Prime Minister clearly don’t see eye-to-eye and the feud between them hit the world stage earlier this week during a service for the Queen in Edinburgh.

Truss’s visit to Scotland to accompany King Charles around the UK following the death of the Queen went by without incident, however there was one slip. She was spotted giving Sturgeon a ‘cold’ stare during a service of prayer and reflection at St Giles’ Cathedral in Edinburgh.

During the service Sturgeon, dressed in an all black outfit and black hat, read the first lesson Ecclesiastes 3: 1–15. When the SNP leader stood up to give a reading in the Cathedral, Truss was spotted by many eagle-eyed viewers giving her an icy look. It was just the latest incident in a long line that started earlier this year during the Tory leadership race.

On August 1 the then Tory leadership favourite launched a blistering attack on Sturgeon branding her an “attention seeker” who should be “ignored”. The comments were made during a hustings in Exeter, where Truss and Rishi Sunak were asked about the prospect of a second independence referendum.

Asked about another vote, she said: “No, no no. I feel like I’m a child of the union, that I really believe we are a family and we’re better together. And I think the best thing to do with Nicola Sturgeon is ignore her.

“She’s an attention seeker, that’s what she is. And what we need to do is show the people of Scotland, Northern Ireland and Wales what we are delivering for them, and making sure that all of our government policies apply right across the United Kingdom.”

Truss was asked during an interview later that week with Sky News presenter Kay Burley if she would apologise for her attack on Sturgeon during the hustings.

Burley asked: “Will you apologise to Nicola Sturgeon?” Truss replied: “No”. The audience, which was made up of Conservative Party members, cheered as she said she wouldn’t issue an apology to the SNP leader.

The SNP leader refrained from getting involved in the Tory leadership race drama however on she eventually took to social media to have a pop back at Truss. Sturgeon poked fun at Truss by posting a snap on Twitter of a seal popping its head out the water in Argyll.

She captioned the picture: “Spotted this cute seal in beautiful Argyll. I think s/he might be a bit of an attention seeker.” The FM also posted an emoji of a seal and a winking face.

Nicola Sturgeon used an Edinburgh Fringe event to mock the then-Foreign Secretary saying she once asked her how to get into the lifestyle magazine Vogue. During Iain Dale’s All Talk with Sturgeon, the FM said the only time she has ever met Truss was at the COP26 climate conference in Glasgow last year.

Sturgeon had just appeared in Vogue magazine in October 2021 to speak about the climate and her time as FM. Sturgeon claimed Truss asked her, “how she could get in Vogue”. 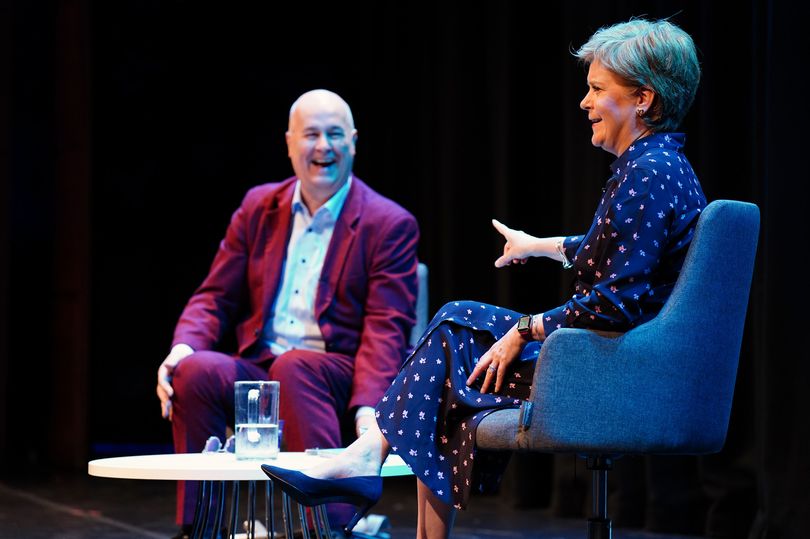 She added: “That was the main thing she wanted to talk to me about, she wanted to know how she could get into Vogue – and she calls me an attention-seeker. I said to her ‘they came and asked me’. I didn’t really mean to do this, but I said to her it hadn’t actually been my first time in Vogue, it had been my second time.

“It looked a little bit as if she’d swallowed a wasp. I’m sure she’ll be in Vogue before too long. I remember it because there we were at the world’s biggest climate change conference in Glasgow, world leaders about to arrive. That was the main topic of conversation she was interested in pursuing.”

A day before the result of the Tory leadership race Sturgeon took to the airwaves to have a pop at Truss saying she would be a “disaster” as Prime Minister. The Scottish First Minister said she hoped for a “constructive” relationship with Truss.

She told the Sophy Ridge on Sunday programme: “It’s obviously the case that Liz Truss and I don’t agree on very much politically, but I’m a firm believer in giving anybody who’s coming into the office of Prime Minister a chance to prove themselves, and I will certainly do my best to build a constructive working relationship with her.

“If she governs how she has campaigned over the summer, she will be a disaster – not just for Scotland but for all of the UK – but let’s hope that’s not the case, because this is a very serious time for the UK and it needs very serious and very purposeful leadership.”