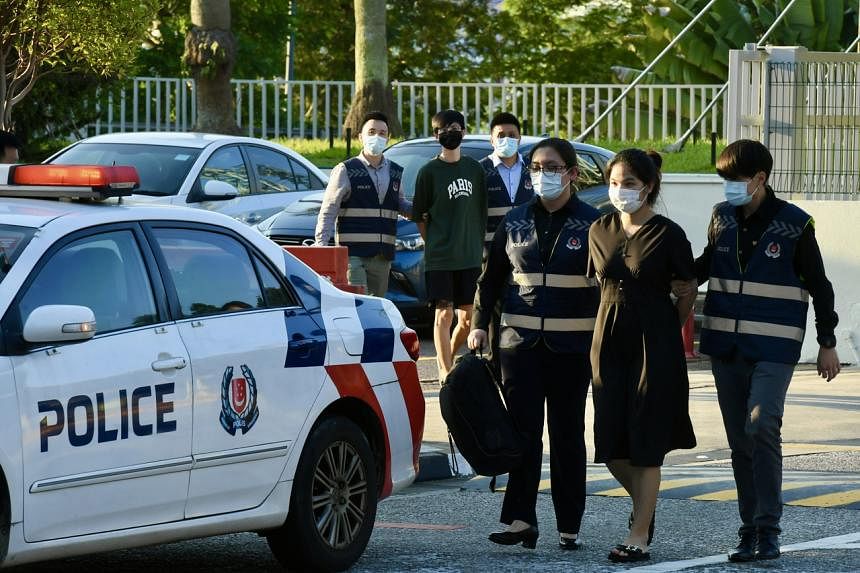 SINGAPORE – The couple allegedly involved in a luxury goods scam, related to undelivered items worth $32 million, will be further remanded in prison for a week as more time is needed for investigations.

Pi Jiapeng, 26, and his Thai wife Pansuk Siriwapa, 27, have both engaged lawyers to represent them.

A prosecutor told the court on Friday (Aug 19) more time was needed for investigations as the case is complex, involving more than 180 police reports.

He said: “It involves losses of more than $20 million and the investigation officer needs more time to find out the whereabouts of the funds received by the two companies (Tradenation and Trade Luxury).”

The duo were each slapped with three charges on Aug 12 – two for cheating and one charge of leaving Singapore illegally.

They are accused of being involved in a conspiracy to cheat customers of Tradenation and Trade Luxury between January and June.

The pair had allegedly duped victims into believing they would be sold watches and luxury handbags, but had no intention to deliver the items.

Arrest warrants and Interpol red notices were issued against them after more than 180 police reports were lodged against the two companies they were involved in.

Deputy Public Prosecutor David Koh had said on Aug 12 that victims had paid more than $20 million but did not receive their goods.

The specific sum involved was not mentioned in court documents.

Pi, who was born in Fujian province in China, was initially arrested by the Singapore Police Force (SPF) on June 27. He had his passport impounded and was released on $15,000 bail the next day.

Pansuk was assisting the police with investigations and surrendered her passport to officers on June 30.

But they became uncontactable and allegedly fled Singapore illegally via the land border on July 4.

Alias and Fazli purportedly helped the couple flee the country by letting them hide in the container compartment of a Malaysia-registered lorry, which then passed through Tuas Checkpoint.

Five weeks later, the Royal Thai Police informed SPF that Pi and Pansuk may have been staying in a Johor Bahru hotel.

The SPF then asked the Royal Malaysia Police to locate them.

They arrested the couple on Aug 11 in JB and handed them over to the SPF that day.

They were refused bail on Aug 12 after a judge agreed with the prosecution that they were flight risks.

OTTAWA — Repair bills from the cluster of wind storms that pummeled southern Ontario and western Quebec in May are now over $1 billion, and with contractors stretched thin the recovery will last well into next summer. As recovery crews face another colossal restoration job in the aftermath of post-tropical ...

TouchArcade Score: Each and every and each day new cell video games are hitting the App Retailer, and so every week we put in combination a large outdated record of all of the very best new releases of the previous seven days. Again within the day the App Retailer would ...

The SEC alleges that Hydrogen has been involved in unregistered offers and sales of securities in the form of its Hydro token.

This summer, I descended more than 6.7 miles to the bottom of the Pacific Ocean in a two-seat submarine to the world’s deepest undersea chasm, the Challenger Deep in the Mariana Trench. My goal was to explore a previously unvisited area of the trench and use high-resolution sonar to ...

Hamilton police say a man is dead after he was found at the scene of a house fire on Wednesday night. Police say officers responded shortly after 8 p.m. to a house fire on Traymore Avenue, close to McMaster University. They say firefighters found a man in his 20s without ...

Traditional fishing boats on Sao Vicente – Getty Some countries shine brightly on the map of the world. Your eye is drawn to them before your brain has clicked into gear. The US is one of them. So is France. So is Italy, as it dangles its shapely leg ...


View more: Why this Atlantic outpost is the most underrated winter-sun destination in the world