A major motorway will be closed in places for roadworks.

The closures will take place from Friday (19 August) night until Monday (22 August) morning.

National Highways has confirmed which junctions will be closed.

Here is all you need to know:

Where is the M1 closed and what junctions are affected?

National Highways has announced the following closures between 19 August and 22 August:

Junction 33 is in Yorkshire – serving Rotherham and Sheffield.

Why are there closures on the M1?

National Highways announced the closures on the motorway this weekend due to roadworks.

What has National Highways said?

M1 is also shut northbound and southbound at J42 to M62 eastbound J29. 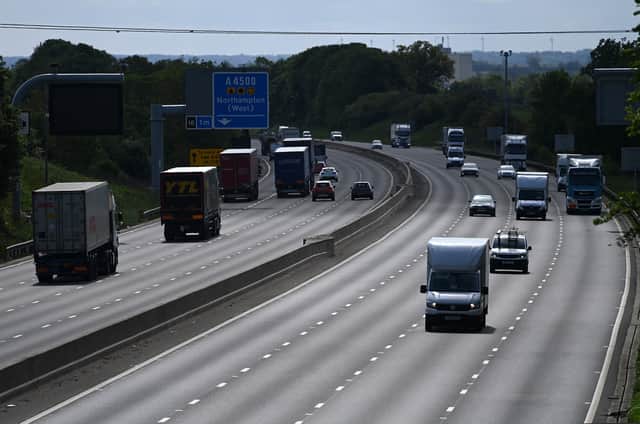 Is there a diversion route in place?

National Highways said that there will be diversion routes in place for the M1 closure at J42.

It will be signposted for drivers.

Will there be traffic?

Due to the closures on the M1 this weekend, there could be delays and distruptions on the motorway.

When did the M1 open and how long is it?

The M1 motorway connects London to Leeds, where it joins the A1(M) near Aberford, to connect to Newcastle. It was the first inter-urban motorway to be completed in the UK.

The first motorway in the country was the Preston By-pass, which later became part of the M6.

The M1 was built in four phases.

Plans for a motorway network across the United Kingdom pre-dated the Second World War.

In 1923, Lord Montagu formed a company to build a ‘motorway like road’ from London to Birmingham.

However it wasn’t until 26 years later when the Special Roads Act 1949 was passed.

This law allowed for the construction of roads limited to specific vehicle classifications, and in the 1950s, the country’s first motorways were given the government go-ahead.

In the early days, the M1 had no speed limits, crash barriers, or lighting, and had soft shoulders rather than hard.

The first section of the M1 to open was between Junction 5 for Watford and Junction 18 for Crick/Rugby.

The man accused of kidnapping and killing four members of the same family in California, including a baby girl, used to work for their trucking business and was likely out for revenge over his firing last year, according authorities. Jesus Manuel Salgado was formally arrested late Thursday on four counts ...

Sean Hayes, ‘Good Night, Oscar’, Goodman Theatre Liz Lauren Ten years ago, actor Sean Hayes and playwright David Adjmi were working together to develop a play based on the life of Oscar Levant, the actor, pianist and notorious wit of Hollywood’s Golden Age. Now Hayes is preparing to bring ...

TORONTO — Ontario’s electricity system operator says an expected surge in demand over the next few years means the province will need some new natural gas generation in order to avoid rotating blackouts. Energy Minister Todd Smith had asked the Independent Electricity System Operator to explore a moratorium on new ...

#Mouthtape for sleep is trending on TikTok with 38.5 million views, accompanied by videos of people with tape over their mouths as they prepare to go to bed. Many posters claim this increases their ability to breathe through their nose throughout the night, reduces snoring, lowers their risk of ...


View more: Tape Your Mouth Shut to Sleep Better? ‘I Would Definitely Be Careful' About the TikTok Fad, Expert Says

A powerful M1 Max MacBook and Studio Display have no trouble with World of Warcraft. Photo: Ursureiks@Reddit.com Who says Macs aren’t good for gaming? M1 Macs seem to be improving Apple’s reputation on that front, as shown in today’s featured M1 Max MacBook Pro computer setup. With Apple’s most ...

West Ham boss David Moyes admits injured winger Maxwel Cornet will miss the Fulham game but won't be out of action for a long period of time.

Mayor Eric Adams said the city needs emergency funding to provide shelter to migrants and other people without housing. He also asked El Paso to stop sending migrants there.

Recent inflation will affect how Canadians spend Thanksgiving this year. Almost a quarter of Canadians say they will be making some menu changes due to higher food prices. New research out of Dalhousie University’s Agri-Food Analytics Lab shows the price of turkey has increased 15 per cent from last year, ...