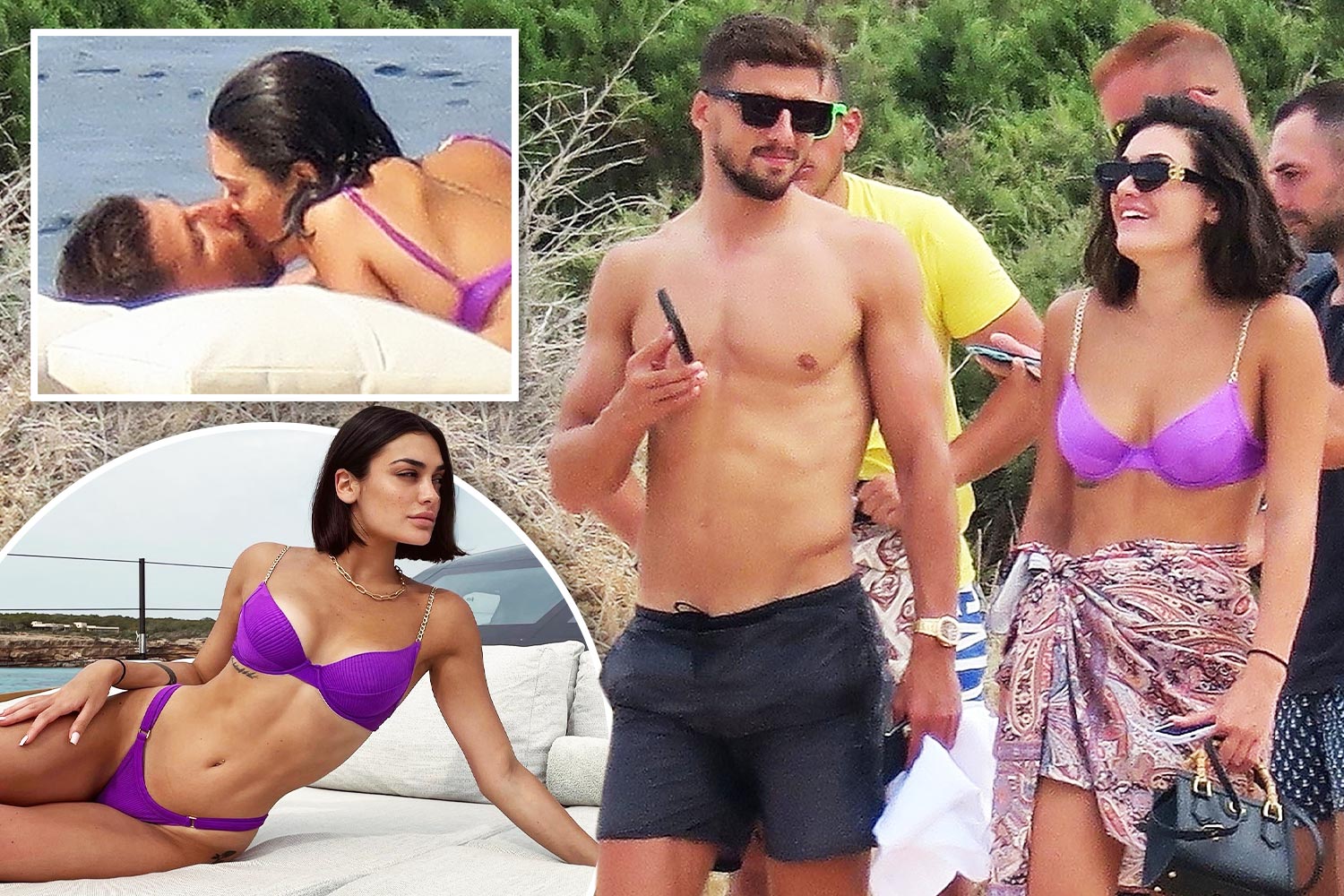 The Sun revealed earlier this week he was snogging a mystery woman on a boat after splitting from his pop star girlfriend. 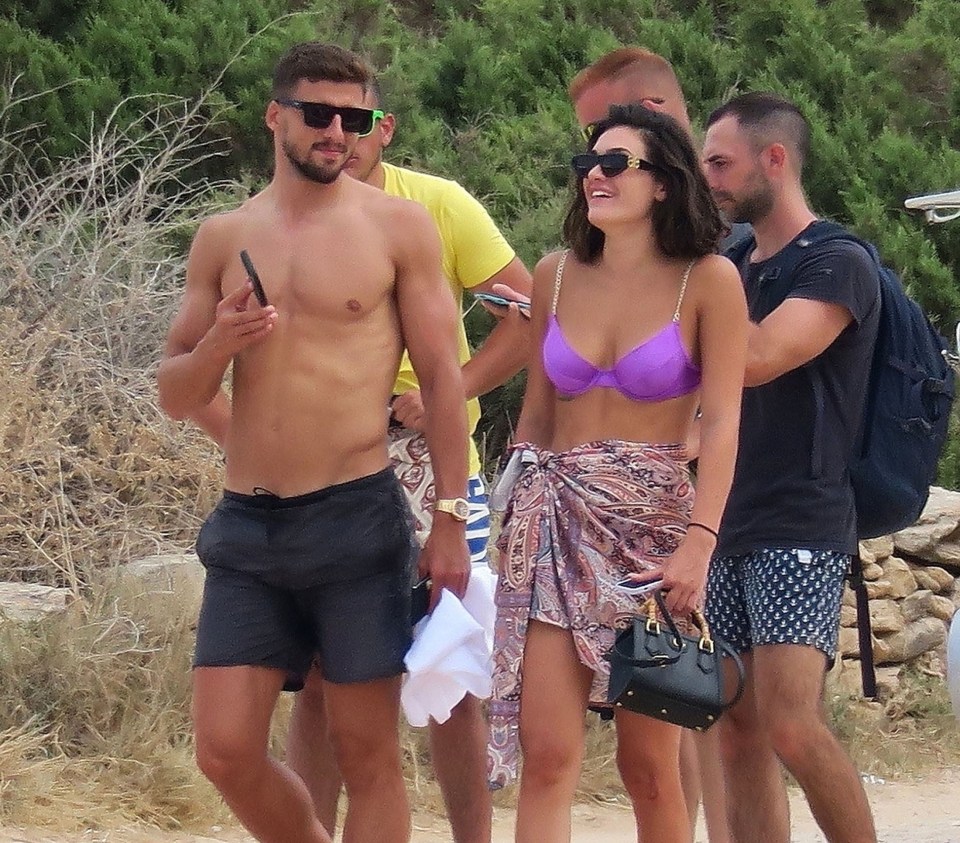 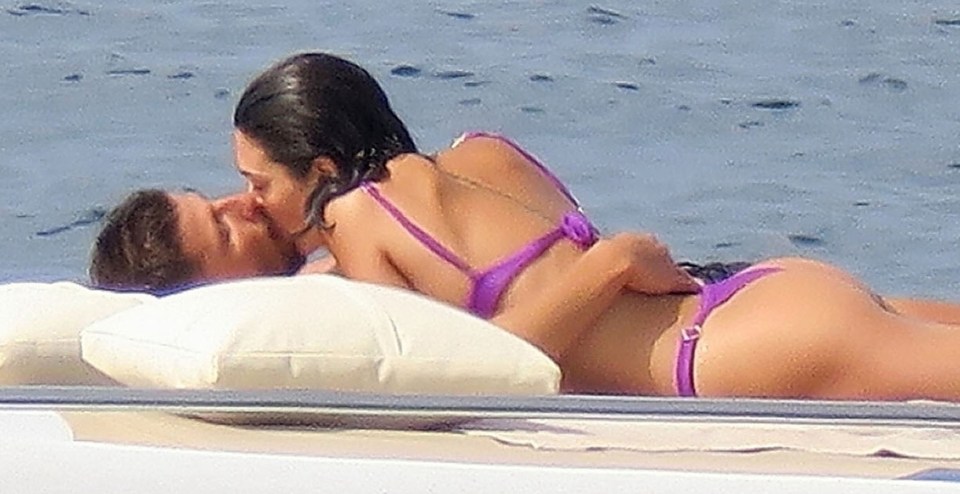 The Sun shared photos of Dias and Festa earlier this week snogging on a boat in FormenteraCredit: BackGrid

Less than 12 months ago, the Portuguese centre-back, 25, ended a three-year relationship with stunning singer April Ivy.

But now he has moved on with leggy brunette Ginevra after the pair were seen getting close on a holiday in Formentera.

The sultry dancer has shared jaw-dropping snaps on social media, where she describes herself as an ‘Ibiza dancer’.

She posed with a beautiful array of red and white flowers from a romantic admirer, hinting the Prem giant was behind the gesture.

Pictures show her entertaining crowds at Spain’s Lio cabaret, starring on a catwalk in a dazzling red-sequin dress and lace-up boots, with her hair tied behind her head.

And a video of her performance showed her strutting on stage as a suited male dancer grabbed her from behind and kissed her neck.

Away from work, Ginevra shared images of her with cropped hair in a purple bikini on a speedboat – the same swimsuit she wore when romping with defender Dias.

Her distinctive tattoos were on display, including an inked serpent which stretches down her right arm.

Ginevra, who has also worked in Dubai, is among the performers at the “world’s most glamorous cabaret”, in which dancers, singers and acrobats entertain guests over dinner.

The evening ends with all visitors being invited to dance, and the good news for Dias is that the cabaret venue is due to open restaurants in Mykonos, Las Vegas and London – meaning she could work nearer his Cheshire home.

The lovers have made no attempt to hide their new relationship after following each other on social media.

Dias was seen enjoying himself as he relaxed on a boat off the coast of the Spanish island in The Sun’s published snaps.

And his pin-up partner also chilled out in a skimpy bikini as the pair took in the glorious sunshine.

His previous relationship with pop star April ended because of lifestyle differences, with he being “more discreet” than her, a Portuguese celebrity mag said.

April then drew attention back towards their relationship two months later after she brought out a song which appeared to be about the famous footballer.

“Broken Apologies” opened with the words: “I tried to give you what you needed. But you didn’t see I tried.

“In my mind I can’t find a reason for you to leave us both behind.”

It continued: “So I’m sorry I gave you all my love, sorry I didn’t mess this up, sorry that I wasn’t enough for you.

“So I’m sorry I give my world for you but when you’re in love that’s what you do. I’m hoping you hear this and forgive me.”

They followed up a 2-0 opening weekend victory over West Ham with a comfortable 4-0 thrashing of Bournemouth at the Etihad last Saturday.

Next up for Dias – who has started both games – is a tough trip to St James’ Park to face Newcastle on Sunday. 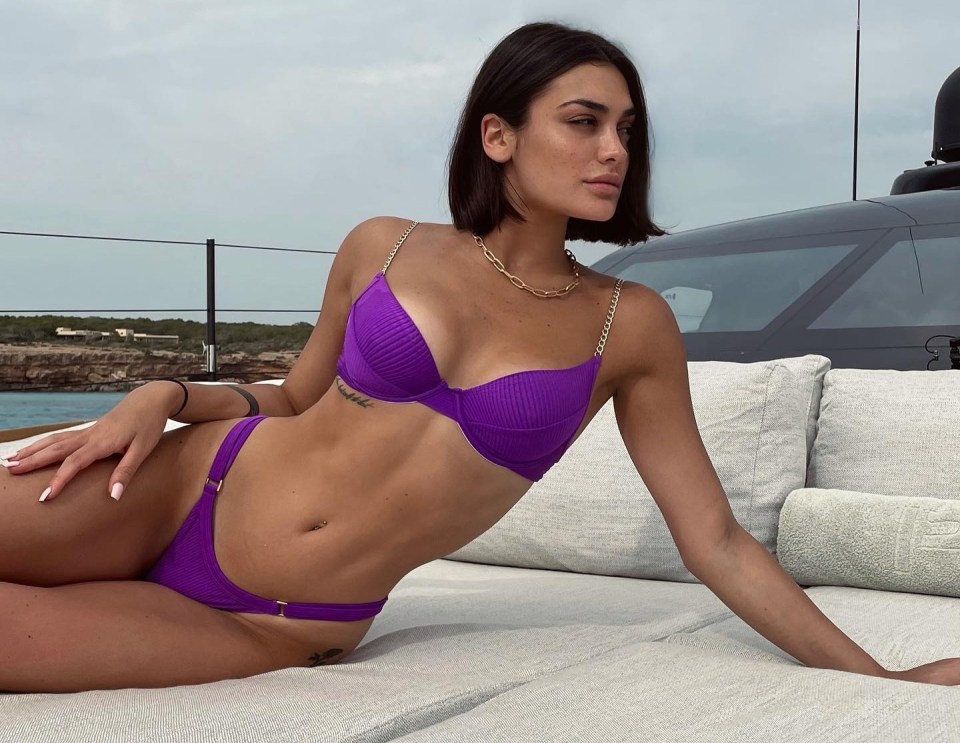 Ginevra has shared jaw-dropping snaps on social media, where she describes herself as an 'Ibiza dancer' 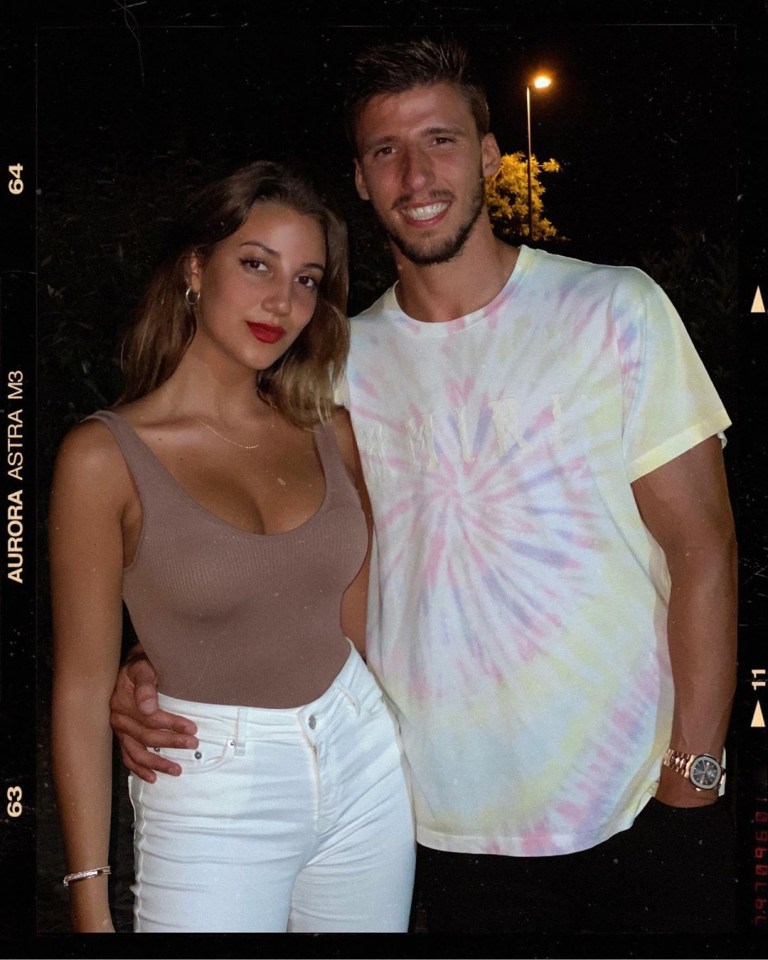 ‘I don’t want to big him up!’ - Henderson delivers his verdict on Liverpool-linked Bellingham

Motor racing: Hamilton vows maximum attack to the end of the F1 season

Motor racing: Albon ready to get back on track in Singapore

Harry Redknapp believes his 'crazy' £15MILLION buy-out clause at Tottenham cost him the England job in 2012 because he 'didn't read the finer print'... and says the FA went with 'cheaper option' Roy Hodgson instead

Football: Grealish says his best is yet to come at Manchester City


View more: EXCLUSIVE: Police arrest a Chesterfield footballer after Oldham player Hallam Hope was left with 'serious injuries' following an alleged assault in a club car park after their game


View more: Christian Pulisic is hoping for a 'fresh start' under new manager Graham Potter at Chelsea - after the American fell out with previous boss Thomas Tuchel - but admits he now has to 'prove himself' at Stamford Bridge

Cynthia Quarcoo is the founder of the Africa 1 Sports academy, which is hosting its first event over the course of this weekend.

Brazilian forward took gold in Tokyo Collected major honours at Ajax Out to make his mark at Old Trafford WHAT HAPPENED? The Brazil international left Ajax to take on a new challenge in England at Old Trafford during the summer transfer window of 2022, with that deal set to ...

NEW YORK – Four-time NBA champion LeBron James is getting into the pickleball business, as his firm LRMR Ventures headlines a new ownership group buying a team with Major League Pickleball (MLP). The four-times NBA MVP is joined by fellow basketball greats Draymond Green and Kevin Love, as well as ...

Dillian Whyte links up with Arturo Gatti's coach Buddy McGirt and relocates to California two years after leaving the UK for Portugal... claiming he is ready to 'step up' and fight Anthony Joshua if his showdown with Tyson Fury is really off

Two Hillsborough survivors committed suicide after their trauma was 'retriggered' by footage of Liverpool fans 'pressed against each other in a tunnel' at the Champions League final in Paris, survivors group claims

Van de Beek sought Man Utd exit after watching Pogba play ahead of him despite turning up late to training, says former agent

'I'm worried for him' - Saliba has 'same style as Ferdinand' but doesn't have anyone to 'learn' from at Arsenal, says Gallas

Konate and Henderson back as Liverpool's injury crisis eases, but Robertson set to miss Brighton game

'He makes my game easier': Bruno Fernandes hails Christian Eriksen's impact in Man United's midfield after Erik ten Hag found a way of playing them together... but they'll have to be at their best against Man City on Sunday!

'I almost don't want to big him up too much!': Jordan Henderson is wary of piling the pressure on Jude Bellingham... but backs the 'amazing' Dortmund midfielder to play a 'big part' for England at Qatar World Cup

AC Milan and Inter's new £1billion stadium 'will hold no more than 65,000 fans' in reduction on San Siro's capacity with clubs keen to avoid empty seats

'It's not quick enough!' Thierry Henry frustrated by slow VAR decisions that 'kill the joy of the game' as Arsenal and France legend says football still has much to learn from other sports when it comes to video technology

British Open: China has glut of contenders, while Judd Trump could go to Hong Kong as No 1

Football: Denmark's Qatar World Cup kit to be toned down

Karim Benzema insists he wants 'MORE' goals as he picks up three awards at Marca 2022 after netting 44 times last season... with the Real Madrid forward set to return from injury this week

Premier League teams 'suffer the highest number of injuries in Europe'... with the league also 'hit hardest financially due to player absentees' as clubs call for fewer fixtures

Arsenal boss Jonas Eidevall is left bewildered by 'weird' goalpost farce in 1-0 win over Ajax... after the goals for Champions League tie were 'too small by 10 centimetres' and had to be CHANGED shortly before kick-off

Barcelona executive Eduard Romeu claims it WOULD be 'financially possible' for the Catalan giants to re-sign Lionel Messi in 2023... leaving the door open for the Nou Camp legend to make a sensational return when his PSG contract expires

Football: Injuries 'up 20 per cent' in Europe's top leagues

Where NFL Fans Can Buy 2022 NFL Salute to Service Apparel

Football League clubs have been MAKING MONEY from their own supporters' gambling losses through controversial Sky Bet scheme, which has been branded as 'exploitation' and discontinued... though some clubs are STILL benefitting from it

Mark Butcher slams England's 'CRIMINAL' batting as they blow another run chase on their tour of Pakistan... and must now win both remaining games to take the T20 series

Can Darwin Nunez end his false start? Will Lisandro Martinez stop Erling Haaland’s stampede? Has Son timed his form perfectly for the derby? The biggest question YOUR team has to answer as the Premier League returns

REVEALED: Anthony Gordon could gatecrash England's World Cup squad, with Gareth Southgate set to keep an eye on the Everton star in the coming weeks after impressive performances for U21s

Manchester City set for crunch talks with unsettled midfielder Bernardo Silva over his future... with champions ready to listen to offers over £80m if the Portugal star wants to leave in the summer amid Barcelona interest

Harry Maguire is set to MISS OUT on Sunday's Manchester derby through injury... though the English defender has already been dropped to the bench by new boss Erik ten Hag despite keeping him on as captain