Manchester United boss Erik ten Hag has opted to keep his squad in Cyprus for warm-weather training before flying back to face Everton.

The Red Devils survived a scare to defeat Omonia Nicosia in their third game of this year’s Europa League group stage. Normally following a European trip, United would fly home within hours of the final whistle, but Ten Hag decided to change those plans this week.

Instead of jetting back to Manchester, which would have taken between four and five hours, United returned to their team hotel. Ten Hag then led a training session on Friday morning ahead of finally boarding a flight in the afternoon.

The players were greeted by temperatures in the region of 27C on the Mediterranean island. It is a change in approach from their last European trip in September, when they flew back immediately after their win over Sheriff Tiraspol.

Following the win over over Omonia, Ten Hag insisted that United staying in Cyprus would be the perfect way to prepare to face Everton in the Premier League. “It’s best in relation to recovery and to preparation for the game on Sunday,” he said.

The Red Devils will land at Manchester Airport on Friday evening, giving them 48 hours back in England before the trip to Goodison Park. And Ten Hag believes his side will face a tough test against the Toffees.

HAVE YOUR SAY! What should be Manchester United’s starting line-up for their trip to Everton? Comment below. 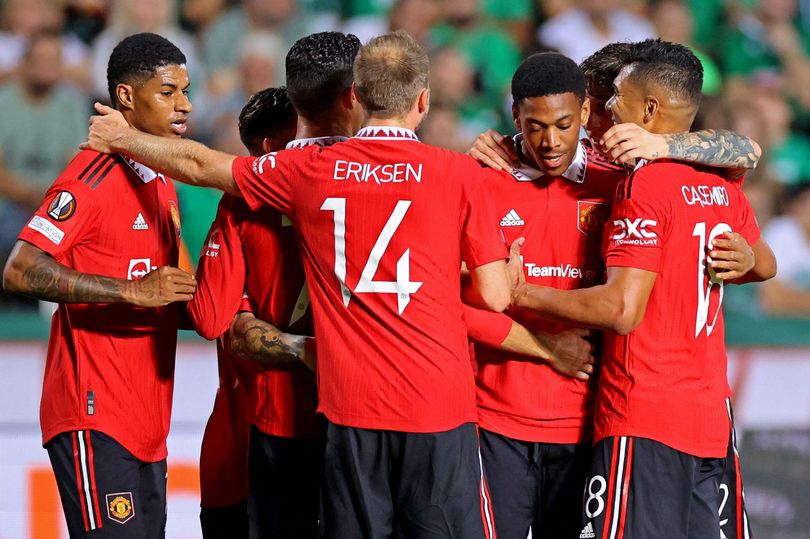 United came from behind to defeat Omonia Nicosia on Thursday

“We don’t have so many moments in training [before facing Omonia] but it was the warm-up, Sunday we have to be ready for a fight, for a battle there. It’s about intensity, that has to be much more and really improved,” the Duthcman said.

“When you compare that last Sunday with [Manchester] City, that was the main lesson for us. We have to bring much more intensity in games, like against City and Everton is the same. That’s going to be a hard battle and we have to be ready for that.

“It’s a process. A project and a process, we knew that from the start. We have to give every day our maximum. We have to improve every day and also sometimes you fall back. We have to get up again and that is what I demand from my squad. We have to carry on and every time learn the lessons and give the maximum.

The trip to Everton will be the first chance in the Premier League for United to bounce back from their humiliating 6-3 defeat by Manchester City. Frank Lampard’s men have won just twice this season and United have the chance to jump into the top four with a win.