“Jaws”-dropping footage of a manhandled man eater is going viral amid record-setting shark sightings, attacks and beach closures in the New York area.

A man has been filmed wrestling with a shark on the shore of a popular Long Island beach, leaving fellow sun seekers screaming in terror.

In the clip, the unidentified man can be seen standing in the shallows of the water before he pulls a gray tail toward the surface.

“Holy s–t,” a woman can be heard exclaiming in the background, as other people gather to watch the unfolding spectacle.

The shark attempts to break free from the man’s grip and swim back into the water, but he continues to try and pull the predator onto the sand.

A subsequent photo shared to another beachgoer’s Instagram Stories shows the man being assisted as he attempts to get the shark out of the water. 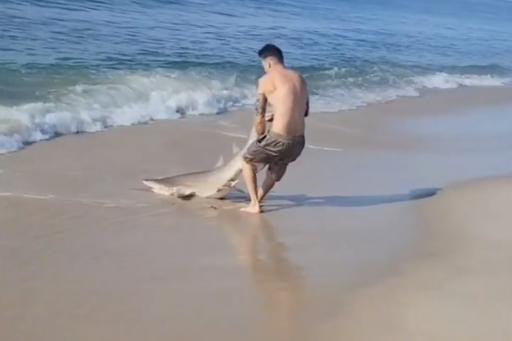 The unidentified man was seen pulling the shark to shore Smith Point Beach on Fire Island on Sunday.

The Post has reached out to the woman who took the frightful photo for further details.

The man’s antics attracted criticism on social media, with one person replying: “Any reason why they pull that shark out of the water? Isn’t it [in its own] habitat?”

Another stated: “Kind of wish the shark had bit this guy. Leave the animals alone!”

While it has not been confirmed, the creature actually appeared to be a sand tiger shark — a non-aggressive species of shark known only to attack humans when bothered first.

However, swimmers at Smith Point Beach have been on high alert in recent weeks, following two separate shark attacks. 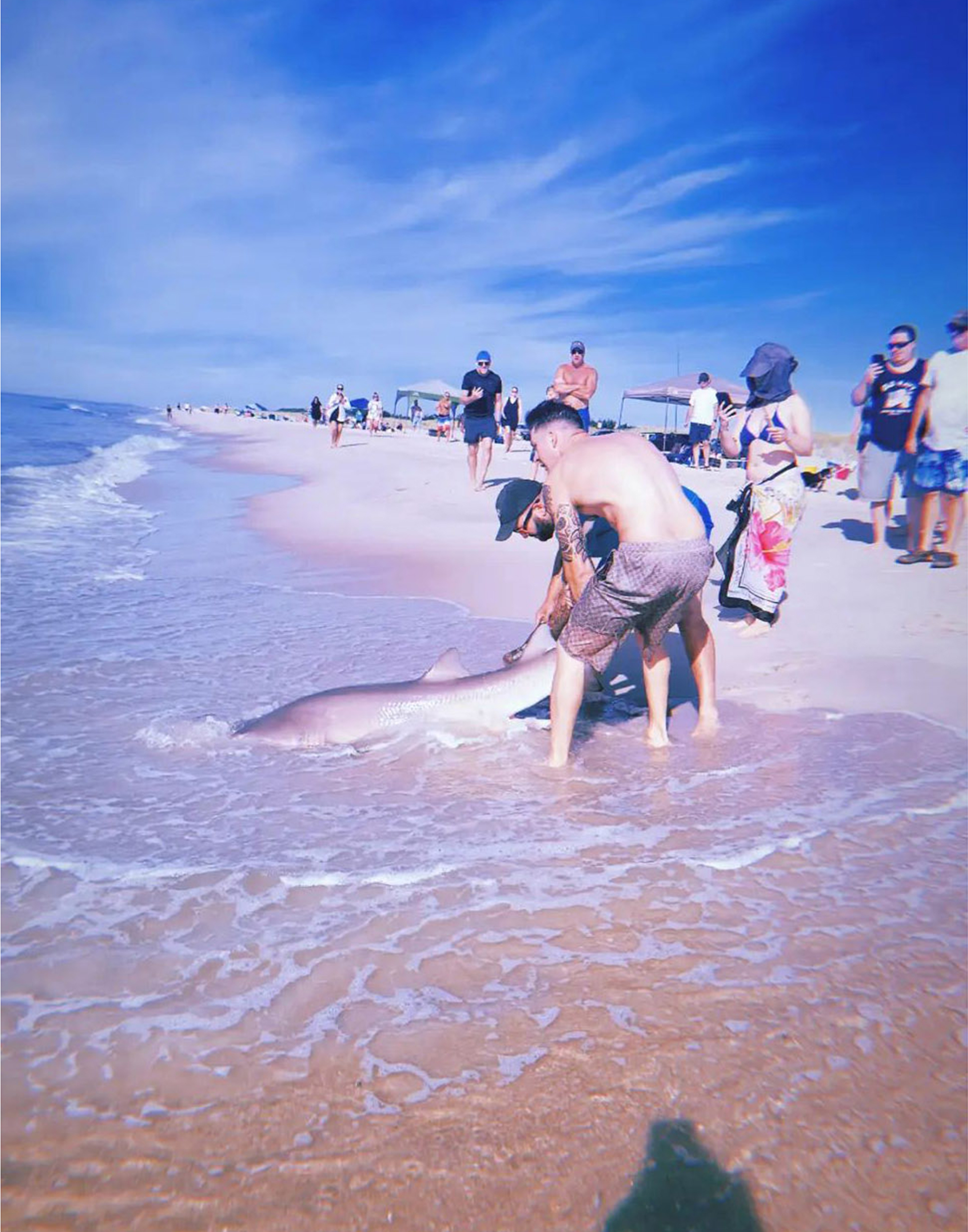 In a snap shared on Instagram Stories, the man was assisted by a second beachgoer as they wrestled the predator in front of stunned onlookers.

While it has not been confirmed, the creature appeared to be a sand tiger shark — a non-aggressive species of shark known only to attack humans when bothered first.

On July 13, a 41-year-old surfer was rushed to hospital after being bitten by a 4-foot tiger shark while out on the water on his board.

The predator left a 4-inch gash in the man’s leg, but he survived the terrifying ordeal.

Meanwhile, on July 3, a young lifeguard was bitten on the chest and right hand by a shark estimated to be 5-feet in length.

The guard — who was in the middle of a training exercise — fought off the beast with his bare hands before making it to shore.

Shark attacks on Long Island “are extremely rare,” according to local officials, but they have increased in frequency of late.

In July alone, there were four other incidents recorded across Long Island. 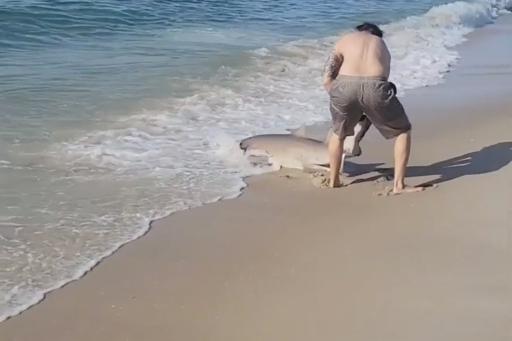 The man’s antics attracted criticism on social media, with one person replying: “Any reason why they pull that shark out of the water? Isn’t it [in its own] habitat?”

Meanwhile, the other parts of the east coast are also currently experiencing a shark scourge with a spate of attacks occurring this summer.

There have been several shark sightings and attacks in Florida, with a recent viral video showing two sharks circling swimmers frolicking in the water at a Jacksonville beach.

BMW eDrive Batteries Are Designed For Safety, Sustainability, And Serviceability

A string of new regulations are expected to be implemented by the Federal government following the Optus data leak saga. Treasurer Jim Chalmers made the announcement on Thursday, saying the changes would aim to detect and mitigate the risks of cyber security frauds, scams and other malicious cyber activities. The ...

A former ambulance officer on trial for murdering his wife 40 years ago was “frantic and upset” when he asked if a colleague was hiding her. “I told him he was free to search the house if he wished,” Edward Gudgeon testified in the NSW Supreme Court on Thursday. ...

The infamous Gold Coast mega mansion where Johnny Depp allegedly severed his finger and kept his illegally smuggled dogs has reportedly been sold for a record-breaking price. Depp and his then wife Amber Heard stayed at the sprawling 18-hectare property in 2015 while he was filming the latest instalment in ...