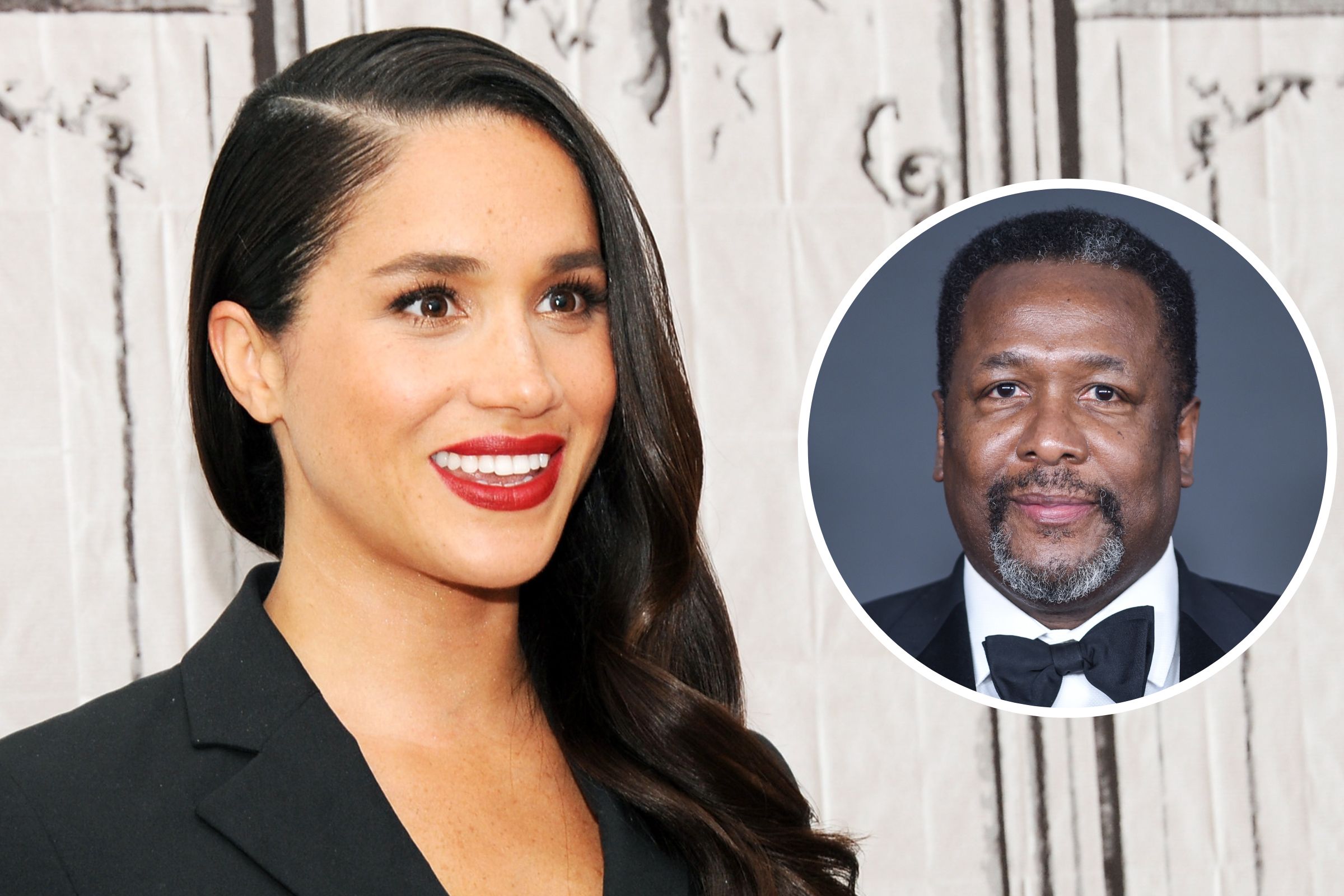 Meghan Markle, seen at a ‘Suits’ promotional event In New York, on March 17, 2016, wrote about the fan reaction to her on-screen father Robert Zane, played by Wendell Pierce, in a 2015 article. A clip of the show resurfaced on Twitter.

Meghan Markle’s character in Suits says “You think this is a year round tan?” in a resurfaced video clip viewed more than 2 million times.

In the footage, Rachel Zane, played by the Duchess of Sussex prior to her wedding to Prince Harry, tells main character Mike Ross, played by Patrick J. Adams, that a lawyer involved in a lawsuit is her father.

When Ross reacts with surprise, Zane suggests his disbelief might be as a result of not realizing that her father was Black. In real life, Meghan’s mother Doria Ragland is Black and her father Thomas Markle Sr. is white.

The exchange was relevant even before Meghan joined the royal family, as she described in an essay how the introduction of Robert Zane as a character triggered fan racism.

However, it is doubly so since Meghan told Oprah Winfrey in March 2021 how an unnamed royal family member expressed concerns about how dark her unborn child’s skin might be.

Meghan Markle’s Suits Character Says ‘You Think This Is a Year Round Tan?’

A Twitter account that posted the footage wrote: “Time to bring back this hilarious #Suits scene that is still relevant to this day.”

Time to bring back this hilarious #Suits scene that is still relevant to this day. pic.twitter.com/fo0utAAUMG

In the footage, Meghan, as Rachel Zane, says: “The new opposing counsel is my dad.”

Adams, as Mike Ross, replies, “Your dad is Robert Zane?” before Meghan says: “Is it so hard to believe that my father’s Black?”

Adams’ character says, “Robert Zane is Black?” before Meghan replies: “You think this is a year-round tan?”

Ross says: “I know who you are but I can’t believe that your father is the Robert Zane and you never said anything to me.”

Meghan Markle Experienced Racism Because Her Suits Character Was Black

Meghan Markle described herself as “ethnically ambiguous” in an essay for Elle magazine published in 2015, before she met Prince Harry, and directly referenced the moment Wendell Pierce was introduced as her on-screen father Robert Zane.

She also said some fans of the show had reacted badly to the revelation that her character’s father was Black.

Meghan wrote: “At the end of season two, the producers went a step further and cast the role of Rachel’s father as a dark-skinned African-American man, played by the brilliant Wendell Pierce.

“I remember the tweets when that first episode of the Zane family aired, they ran the gamut from: ‘Why would they make her dad black? She’s not black’ to ‘Ew, she’s black? I used to think she was hot.’

“The latter was blocked and reported. The reaction was unexpected, but speaks of the undercurrent of racism that is so prevalent, especially within America.”

“Being ‘ethnically ambiguous’, as I was pegged in the industry, meant I could audition for virtually any role,” she added.

“Morphing from Latina when I was dressed in red, to African American when in mustard yellow; my closet filled with fashionable frocks to make me look as racially varied as an Eighties Benetton poster.

“Sadly, it didn’t matter: I wasn’t black enough for the black roles and I wasn’t white enough for the white ones, leaving me somewhere in the middle as the ethnic chameleon who couldn’t book a job.”

More recently, Meghan’s most famous comments on race came during her Oprah Winfrey interview when she said of her son Archie: “So we have in tandem the conversation of ‘He won’t be given security, he’s not going to be given a title’ and also concerns and conversations about how dark his skin might be when he’s born.”

The allegation was perhaps the most dramatic of the CBS tell all, in March 2021, and triggered a global conversation about racism.

Meghan and Prince Harry did not name the allegedly racist royal but told Oprah off air that it was neither Queen Elizabeth II nor Prince Philip.

Biography The King: The Life of Charles III, published on November 8, suggests that King Charles III also did not initially realize Meghan was a woman of color after meeting her for the first time in 2016.

“At the time, Prince Charles had no idea that Harry’s new girlfriend was biracial. ‘Not that it would have mattered at all, of course,’ Charles told an American friend. ‘But no, I didn’t realize that until later’.”

Christopher Bouzy, of data analysis firm Bot Sentinel, previously tracked Levin’s association with anti-Meghan Twitter accounts and told Newsweek: “Angela Levin’s comments were racist and reprehensible, and her constant attacks aimed at the duchess helps to add fuel to the onslaught of abuse from online trolls.”