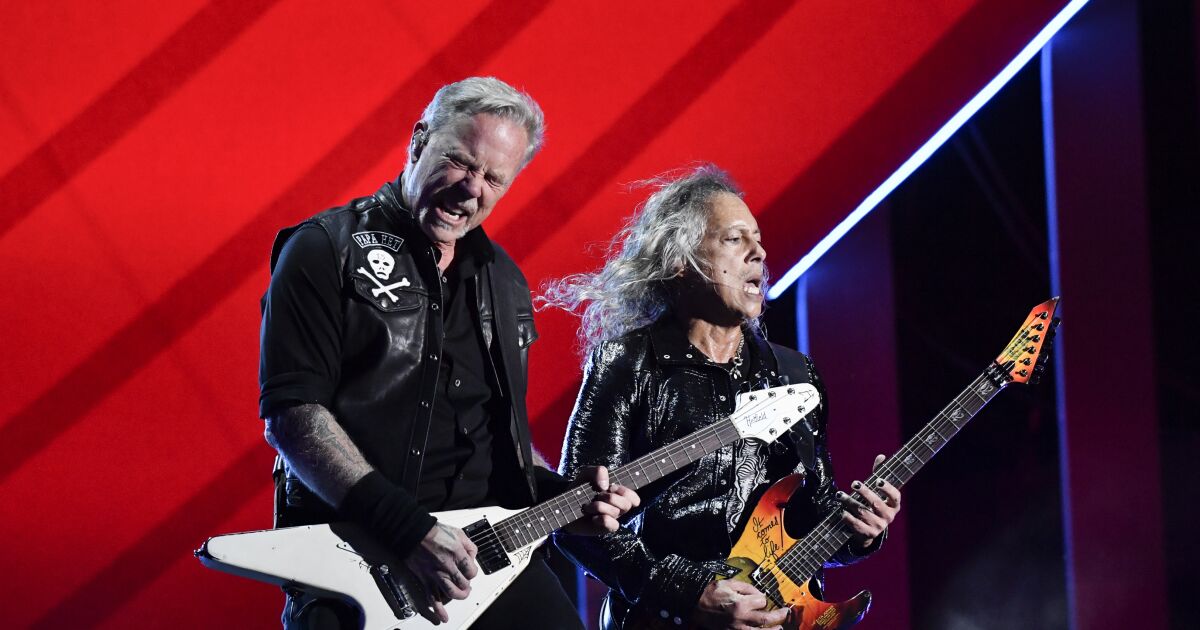 Metallica is gearing up for a very busy two years.

After launching in Amsterdam on April 27, the 46-show tour will make its way to Southern California in August for two shows at SoFi Stadium in Inglewood.

The band has dubbed the tour stops “no repeat weekends” and also has shows all over Europe and North America through 2024. Opening acts Pantera and Mammoth WVH will play the Aug. 25 show at SoFi and Five Finger Death Punch and Ice Nine Kills will perform at the Aug. 27 concert. The Architects, Volbeat and Greta Van Fleet have been tapped for other dates on the tour.

“Starting in April of 2023, we’ll be visiting 22 different cities around the world and playing two nights in each city, with each ‘No Repeat Weekend’ show a completely unique experience: Two totally different set lists with two different bands opening the show each night!” the band announced Monday.

“Purchase a two-day ticket, and you won’t see the same song twice for a total of over 30 songs spanning our 40+ years of being lucky enough to make music. Most of the shows (sorry, not all — we tried!) will be on Fridays and Sundays, so we’ll be sure to have lots of extracurricular events for you to hang with fellow Metallica fans at before the shows kick-off and on the Saturday night in between.”

Pre-sales for the tour begin Wednesday.

Meanwhile, Metallica’s new “72 Seasons” album, which contains 12 tracks, was produced by Ulrich, Greg Fidelman and James Hetfield and got its title from the 72 seasons that comprise the first 18 years of a person’s life, the band said.

“72 seasons. The first 18 years of our lives that form our true or false selves. The concept that we were told ‘who we are’ by our parents. A possible pigeonholing around what kind of personality we are,” guitarist Hetfield explained. I think the most interesting part of this is the continued study of those core beliefs and how it affects our perception of the world today. Much of our adult experience is reenactment or reaction to these childhood experiences. Prisoners of childhood or breaking free of those bondages we carry.”

The new album comes six years after the band’s 2016 outing “Hardwired … to Self-Destruct,” which came a long eight years after 2008’s “Death Magnetic.” While Metallica also reissued classics and recorded live albums in that time, the band notably climbed the Billboard songs chart this summer with its 1986 song “Master of Puppets” after it was featured in the Season 4 finale of Netflix’s “Stranger Things.”`

Before launching the tour, Metallica will play a concert benefiting its All Within My Hands Foundation on Dec. 16 in downtown Los Angeles.

Guest Greta Van Fleet will open the show and Paramount+ will livestream the event at 5:30 p.m. Pacific time. It will also be simulcast on Pluto TV globally and on YouTube.

SACRAMENTO — Following the release of the video showing the brutal beating of Tyre Nichols by Memphis police officers, outrage and heartbreak could be seen throughout Northern California, where the 29-year-old grew up. Nichols’ passions became known to the world after his death. However, his love for skateboarding and photography ...

TOTTENHAM's transfer move for Sporting Lisbon full-back Pedro Porro is OFF, according to reports. The North London club were negotiating a £40million transfer for the 23-year-old Spain international. Pedro Porro's transfer to Spurs has collapsedCredit: Getty Porro was keen on sealing a January transfer with Emerson Royal, Matt Doherty ...

Photo: depositophotos Two casinos in Limburg belonging to the same chain have been targeted by armed robbers in the space of three nights, police have said. Masked men raided the Fair Play Casino in Maastricht at around midnight on Sunday, threatened staff and made off on a Vespa scooter ...

San Diego police patrol car Police arrested a man who attacked three people in three separate incidents in downtown San Diego on Sunday, sending them all to nearby hospitals, according to San Diego police. SDPD booked the man with a variety of charges including robbery, assault with a deadly ...

Most people are looking for ways to increase productivity. One of the things people with executive dysfunction struggle with is their level of productivity. Often, they feel like they’re always running and not getting enough accomplished. Productivity is strongly linked to our executive functions, so if you are missing skills, ...


View more: How to Increase Productivity

(Bloomberg) — After more than 100 days walking nearly the entire length of India, Rahul Gandhi, scion of the nation’s most famous political dynasty, stood before a shivering crowd in rural Himachal Pradesh as a cheer went up. Most Read from Bloomberg Bearded and clad in a white t-shirt, Gandhi ...

BharOS versus Android: Everything to know about “desi” mobile OS in 5 points

Over 21,000 techies working for Indian startups fired, many more to lose jobs soon