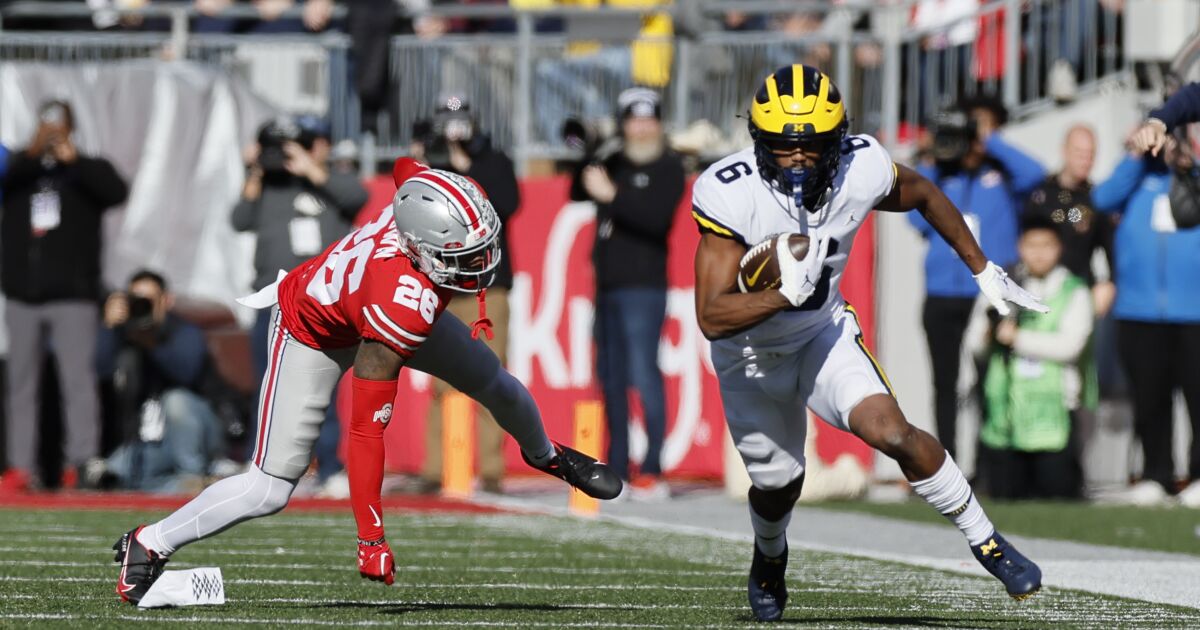 J.J. McCarthy threw three touchdown passes and ran for a score, Donovan Edwards busted the game open with two long fourth-quarter TD runs and No. 3 Michigan beat No. 2 Ohio State 45-23 on Saturday, taking down the Buckeyes with stunning ease for the second consecutive season.

The Wolverines advance to the Big Ten championship game next Saturday, with hopes for a second straight College Football Playoff appearance firmly in their control. As for the Buckeyes, they’ll have to hope they can back into the CFP after again crumbling in their biggest game of the season.

Jim Harbaugh and Michigan snapped an eight-game losing streak against their fiercest rivals last year. Now they have a two-game winning streak in The Game for the first time in 22 years.

McCarthy, the second-year quarterback who won the starting job from incumbent Cade McNamara early in the season, played the game of his career when Michigan needed it most.

His previous longest pass completion was 42 yards, but against the Buckeyes he threw three touchdown passes of at least 45 yards, the most scoring passes of 45 or more in the history of the rivalry game.

He connected on scoring passes of 69 and 75 yards to Cornelius Johnson in the first half, then hooked up with Colston Loveland in the second half for 45 yards and the freshman tight end’s first career touchdown reception.

Then on a third-and-10 play on the Ohio State 13 early in the fourth quarter, McCarthy was on the run from Zach Harrison when he lofted a pass to the end zone toward Ronnie Bell, who drew a pass interference call on safety Ronnie Hickman.

That put the ball on the Ohio State 2, and three plays later the 19-year-old quarterback from suburban Chicago bowled over a tackler for another touchdown and a 31-20 Michigan lead.

The Buckeyes were forced to settle for a Noah Ruggles field goal to cut the Wolverines’ lead to 31-23.

Edwards put the game away for Michigan.

Corum’s backup, who was playing with a heavily wrapped and an injured hand, raced through a hole on the right side and went 75 yards for a touchdown with 7:11 left.

After Ohio State quarterback C.J. Stroud was intercepted, Edwards was off again for an 85-yard scoring run to seal the Michigan victory.

Stroud completed 31 for 48 passes for 349 yards, with two interceptions.

A Castaic father is in custody on charges that he pepper-sprayed his son’s friends, stole a backpack from them and then tried to stab his son following a pair of arguments he had with the alleged victims at his ex-wife’s house. Mark Zarakowski, 48, who is reportedly a transient, pleaded ...

NBCDFW.com From traditional dress to traditional riding, Escaramuza teams keep the strength and beauty of Escaramuza alive. “So Escaramuza to me is more than just a passion, it’s a lifestyle to me,” said Aber Alcala, team captain of Tierra Azteca Escaramuza. “I’ve been raised in this culture. I’ve been ...


View more: Escaramuza Competitions This Weekend at Fort Worth Stock Show and Rodeo

How to lock down your iCloud in iOS 16 with Apple’s Advanced Data Protection iCloud has come a long way since the days of scandalous celebrity hacks, but that doesn’t mean Apple’s pursuit of buttoned-up security is done. Recently, Apple released a much-anticipated new end-to-end encryption feature that protects ...


View more: How to lock down your iCloud in iOS 16 with Apple's Advanced Data Protection

U.S. regulators are investigating Elon Musk’s role in shaping Tesla’s self-driving car claims, the latest effort by watchdogs to scrutinize the actions of the world’s second-richest person. The review is part of an ongoing Securities and Exchange Commission probe of the company’s statements about its Autopilot driver-assistance system, according ...