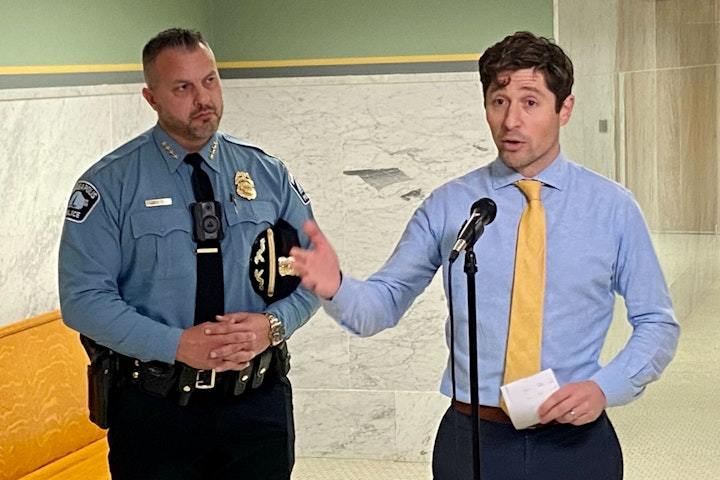 Weeks into the job, Minneapolis’ new police chief raised concerns Thursday about staffing after the City Council cut several civilian positions and about $1 million from the proposed 2023 Minneapolis police budget.

The moves shaved about half a percent off the proposed budget of $195 million. The council also cut civilian positions from the department to fund new positions elsewhere in the city for auditors, a city attorney, and three positions at the Performance Management and Innovation Department.

Even with the cuts, the proposed budget is more than what the police department had in 2020, before the killing of George Floyd sparked a worldwide protest over policing.

Police Chief Brian O’Hara, who was sworn in on Nov. 7, said the department is at its lowest staffing level in years. Next year’s budget provides for 731 sworn officers, a number required by law. There are currently 564 sworn officers “able to work the street,” said O’Hara.

Speaking with Mayor Jacob Frey at a City Hall news conference after the council’s budget committee’s work, O’Hara mentioned the consent decree widely expected to land in Minneapolis next year as a result of the ongoing U.S. Department of Justice review of the police department. “At the same time we know going into next year is going to be unlike anything you’ve seen before,” he said. He and Frey expressed concerns about the department being able to quickly adjust to the requirements of the decree.

O’Hara’s comment during Thursday’s budget meeting brought a response from Council Member Aisha Chughtai, who said the city has already set aside $2 million for a consent decree implementation and compliance fund. The money will come from the general fund.

At the meeting, council members made a series of amendments to Mayor Frey’s proposed 2023 police budget, including moved $30,000 from the police to the Civil Rights department to fund the Community Commission on Police Oversight. Two-thirds of the funding, or $20,000, would continue into future budget years.

The committee also unanimously supported moving two civilian positions from the police department to add two public safety auditors to the office of the city auditor.

The committee voted 7-6 in favor of moving $353,004 for three civilian positions at the police department in order to add three staff to the Performance Management and Innovation Department (PMI). The amendment introduced by council member Andrew Johnson is ongoing. Johnson, who said he used to work for an efficiency team at Target Corp., said the PMI department is already doing helpful work for the city and should be supported. “Having them focused and accelerating their work will pay dividends as they find more efficiencies,” said Johnson.

A measure to reduce the Minneapolis Police Department Law Enforcement Support by $150,000 in order to fund immigration-related services in Minneapolis passed 7 to 6. The money will increase the budget for the Neighborhood and Community Relations Department’s Office of Immigration and Refugee Affairs. It’s a one-time budget move.

The committee also unanimously supported cutting the police budget by $185,000 and instead use the money to support a full-time position at the city attorney’s office. That budget move is ongoing.

The committee also directed some $550,000 from the police department’s general fund be appropriated for community safety pilot projects, the creation of a Lake Street Safety Center and to support auto-theft prevention.

Mayor Frey said “the sky is not falling” with regard to the budget cuts, but the $1,022,104 cut from the MPD budget includes some $762,000 of “ongoing” funding, meaning the cuts continue into future budget years.

“We all know that we have a significant shortage of police officers right now,” he said.

The amendments passed Thursday would shift five civilian positions out of the MPD, he continued, and the cuts will mean sworn officers will backfill their work. “This is data analysts. This is technicians. This is community outreach. These are people that just help with the payroll or the budget. This is work that needs to be done on a daily basis within the police department. And we need to make sure that we’re properly resourced to get that work done,” he said.

The City Council will take up the budget again on Tuesday. A public hearing on the 2023 spending plan, tax levy and proposed fees will be held at 6:05 p.m. in room 317 of City Hall.