Mollie King: who is partner Stuart Broad, age, did she announce pregnancy on Instagram - when is the baby due?

The Saturdays singer Mollie King has announced that she and her cricketer partner Stuart Broad are expecting their first child, with both parties sharing the news on their respective Instagram accounts.

This is everything you need to know.

Who is Mollie King?

King is an English singer and a member of the group The Saturdays, which was formed in 2007 and, alongside King, consists of Frankie Bridge, Una Healy, Rochelle Humes and Vanessa White.

She was born on 4 June 1987 in Wandsworth, London, and came to be part of The Saturdays when record label Polydor Records held auditions to find members for the group. 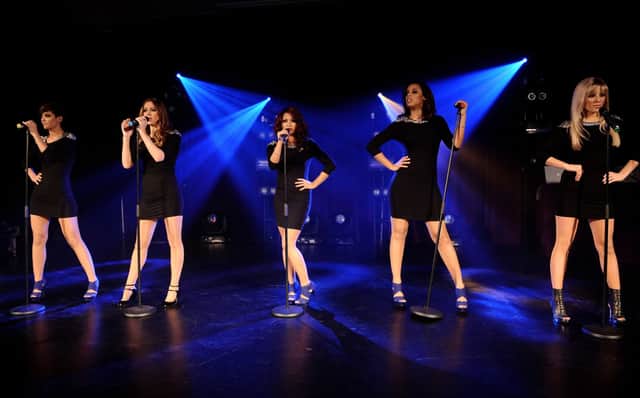 The Saturdays attends the BAFTA Soho House Grey Goose after party at the Grosvenor House Hotel on February 21, 2010 in London, England. (Photo by Ian Gavan/Getty Images For Grey Goose)

When the group formed, they began recording their debut album whilst touring with Girls Aloud on their Tangled Up tour. As part of The Saturdays, King has enjoyed 13 top 10 singles and eight top 5 singles, including the UK number one What About Us.

The band has been on indefinite hiatus since 2014, however in October 2015, King signed a solo deal with Island Records. She released her debut solo single, Back to You, in 2016. 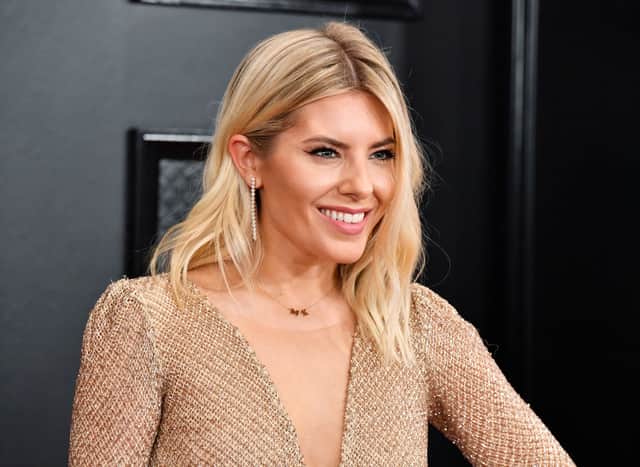 In 2017, King appeared on the 15th season of Strictly Come Dancing, where she was paired up with professional dancer AJ Pritchard. She made it all the way to the semi-final but was ultimately eliminated from the competition.

She has appeared in a number of other TV programmes as well, including guest presenting Blue Peter, Lorraine and This Morning.

Since 2018, King has co-hosted BBC Radio 1 on Fridays, Saturdays and Sundays alongside Matt Edmondson.

Starting September 2022, she is set to begin presenting Future Pop on BBC Radio 1 on Thursday from 8pm to 10pm.

Who is her partner Stuart Broad?

Broad is an English cricketer who plays for the England cricket team as a bowler.

Born in Nottingham on 24 June 1986, Broad, a right-arm seam bowler and left-handed batsman, began his sporting career at Leicestershire, where he stayed from 2005 to 2007. 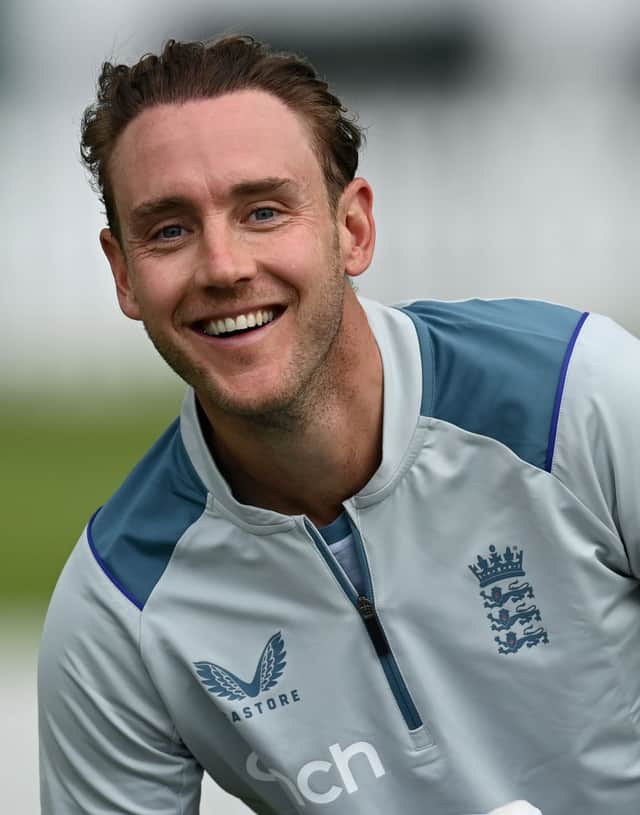 Stuart Broad of England during a nets session at Lord’s Cricket Ground on May 31, 2022 in London, England. (Photo by Gareth Copley/Getty Images)

He transferred to Nottinghamshire in 2008 for whom he still plays domestically today.

Broad was included in the England one-day squad for the one-day internationals against Pakistan in 2006 and, a few days later, was named Young Cricketer of the year by the Cricket Writers’ Club.

In the 2009 Ashes series at the Oval, Broad was awarded the Man of the Match in the fifth Test. 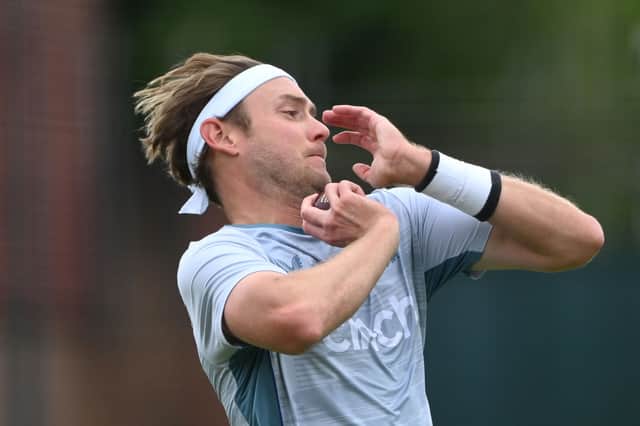 England bowler Stuart Broad in bowling action during an England nets session ahead of the test series against New Zealand at Lord’s Cricket Ground on May 30, 2022 in London, England. (Photo by Stu Forster/Getty Images)

Broad was awarded an MBE in the 2016 Birthday Honours list for his services to cricket.

He was previously nominated for Sports Personality Of The Year but lost out to Formula 1 star Sir Lewis Hamilton.

His father is Chris Broad, who played cricket for England from 1984 to 1989 and who is currently a cricket official.

King and Broad, both 35, have been dating since 2018 and it was revealed in January 2021 that the pair had gotten engaged.

At the time, King posted a picture of herself and Broad sharing a kiss, with her engagement ring prominently on display. She wrote in the caption: “A thousand times yes! I still can’t believe it, the most magical start to the new year! I can’t wait to spend all my years with you @stuartbroad”

Broad posted the same picture to his own account with a short but sweet caption: “The best way to start 2021 @mollieking”

A wedding date has not yet been announced by either King or Broad. 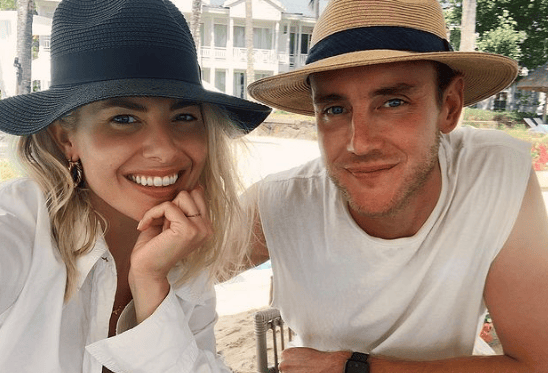 The two have been engaged since January 2021 (Photo: Mollie King/@mollieking)

Speaking to the Express earlier this month, Broad said: “It’s obviously been a tricky time to plan a wedding. We were looking at trying to do it last summer but then it just felt too risky, that it might get cancelled.”

He said that, as it stands, “everything is booked up”, so he and King might have to “play a slight patience game at the moment”.

When asked if there was a date or a venue, he said: “No we haven’t got as far as that but it’s certainly at the forefront of our minds and it will happen at the beginning of next year.”

When did they announce the pregnancy?

King posted the announcement on her Instagram account on Wednesday (22 June) with a picture of herself and Broad kissing her baby bump.

In the caption she wrote: “Stuart and I are so so happy to share that we’re expecting a baby later this year! We’re absolutely over the moon [heart emoji]”

King’s Saturdays bandmates were among the first to offer their congratulations, with Frankie Bridge writing “Can. Not. Wait!” and Rochelle Humes said “Best news ever”.

The other members from the girl group also shared their support with Vanessa White commenting “Incredible news!”, and Una Healy adding a string of heart emojis.

He said: “Congratulations guys. What a beautiful picture. That baby has no idea how lucky it is to have you both as parents”.

Broad posted the same picture to his own account and wrote: “Mollie & I are thrilled to be expecting a baby at the end of the year! Exciting times ahead!”

Kelsey Grammer Finally Gives an Update on the Frasier Reboot

'He definitely got that postcard!' Love Island's Andrew breaks down in tears in a dramatic preview clip... after kissing Coco whilst Tasha makes moves with Billy at Casa Amour

From Ramen to Ragu, Here’s a List of Recipes Using Leftover Pork

Food, drink, good conversation and leftovers – what’s not to love about hosting dinner parties? Especially if you went to the effort of making a pork roast. With tender meat and crispy crackling, it’s a surefire way to impress. But now the party is over, what are you going to ...

© Provided by Sports Illustrated The Clippers star is working out on the football field during the NBA offseason. View the original article to see embedded media. Clippers guard Paul George was limited to 31 games last season due to injury, but he seems to be feeling healthy now based ...


View more: Airbus to provide 42 satellite platforms and services to Northrop Grumman for the US Space Development Agency program

Cramer's lightning round: I have no catalyst to recommend SoFi

EXCLUSIVE: Highland Park shooter was facing life on the streets as his home was set for foreclosure. Neighbor says she fears her refusal to date him could have sparked his deadly rampage

Video: 'He definitely got that postcard!' Love Island's Andrew breaks down in tears in a dramatic preview clip... after kissing Coco whilst Tasha makes moves with Billy at Casa Amour

Memes take over internet after dramatic night of resignations and reshuffles

15 Best Things to Do in Downtown Sacramento

Where is the cyanide pill? Those were the despairing words of one Cabinet minister on Westminster's biggest day of drama since the toppling of Margaret Thatcher. ANDREW PIERCE has the definitive inside account

10/3 podcast: Does the Roe v. Wade decision have ramifications for Canadian women?

15 Best Things to Do in Bucaramanga

TV anchor arrested amid high drama as Chhattisgarh, UP cops come face off