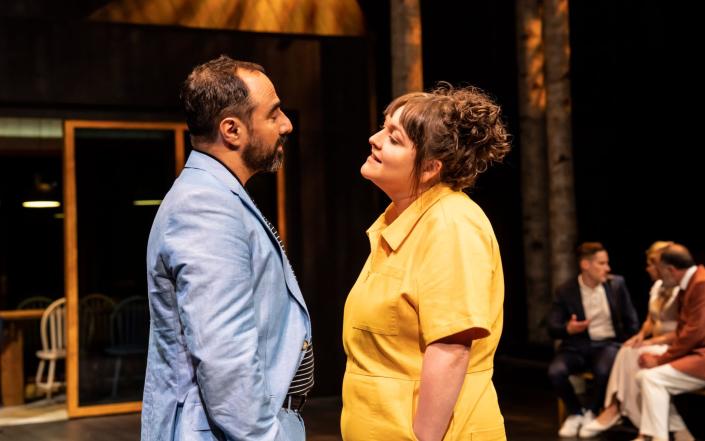 There’s been much opportunity to watch Much Ado this year, with productions at the RSC, the National, the Globe, Leeds Playhouse… but it’s unlikely you’ll see another quite like this. Ramps on the Moon work with deaf, disabled, neurodivergent and non-disabled performers and creatives, staging classics that reliably find smart ways to integrate sign language, audio description and captioning. Directed by Sheffield Theatre’s artistic director Robert Hastie, this is their first Shakespeare.

From opening with a declared Dramatis Personae in which characters drolly introduce themselves and their appearance (Benedick: “Sky blue suit and dark shirt and a chip on my shoulder”), this production both makes the plot of Shakespeare’s darkest rom-com crystal clear and has plenty of irreverent fun with it. Guy Rhys as Benedick has a fine line in comic asides, while the signing certainly seems vividly alive to innuendo in the verse. The often-tedious scenes with the Watchmen are transformed: here, Dogberry and Verges are a pair of hot-pink-wearing, wedding planners. Still incompetent, but fabulously so. The three hours zip by.

I was less convinced by the unfocused setting: Peter McKintosh’s set is a Chekhovian cabin amid birch trees, and the weddings are seemingly pagan, all white gowns and flower garlands. Elsewhere, though, the blokes wear suits with trainers, and the ball is a Wild West hoedown. With masks. It’s a peculiar mish-mash.

But there are more profound rewards to be found in this production which integrates creative sign language, audio description and captioning. In a play so much about spying, characters silently signing to each other what they are eavesdropping on adds to the pervasive sense of observation. Claire Wetherall makes for a touching Hero, and her inability to defend herself against false accusations is made more poignant – and simply more concrete – by her communicating only via sign-language.

Daneka Etchells as a witheringly disdainful Beatrice and Rhys as an exasperated Benedick may not always have the fieriest chemistry, but they do have one of the most moving single moments I’ve seen in any Shakespeare production. Distressed at Hero’s abuse by her fiancé (and most of the other prickly, fickle men), Beatrice demands Benedick kill Claudio in revenge. In this instant of emotional extremity, Etchells – who is autistic – begins stimming: beating her chest and head with compulsive movements. It is Benedick who soothes and comforts her – an act of love all the more tender for being at odds with their usual public displays of tightly-controlled verbal sparring.