Mundka fire toll likely to rise; hunt on for owner 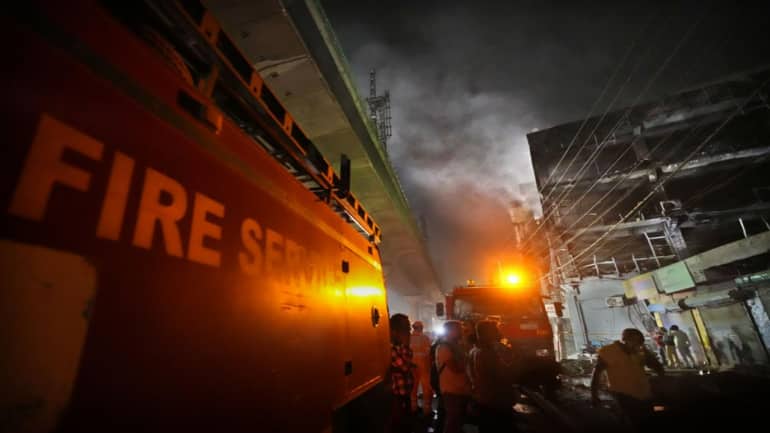 Police confirmed the death of 27 people in the fire which broke out in Delhi’s Mundka locality, yesterday evening ; 12 people were also injured. The building’s owner Manish Lakra who inhabited the top floor is absconding.

As the search for the building’s owner continues Police informed the media that the building did not have a fire NOC.

Stating the progress of the rescue operation DCP Sameer Sharma (Outer District) told the media about the possibility of finding more bodies as the rescue continues.

“We’ll take the help of the forensic team to identify the bodies. FIR has been registered. We’ve detained company owners. There are chances that more bodies may be recovered as the rescue operation is yet to be completed,” said DCP Sameer Sharma (Outer District)

Pointing at one of the hindrances to the rescue operation, the Divisional officer of the Fire Department, Satpal Bhardwaj stated that the four storey building had only one staircase.

“The building did not have proper NOC (from the fire department),” said Satpal Bhardwaj, Divisional Officer, Fire Department.

The Delhi Fire Services, DFS, website says that NOC is required at two stages. The first requirement is at the first stage which is prior to construction of building wherein building plans are approved and fire safety recommendations are issued.

The second stage is after the construction of building before commencing of occupancy, when all the recommended fire and life safety measures have been provided/installed. These shall be verified and Fire Safety Certificate (FSC) shall be issued.

A preliminary enquiry confirmed that the Mundka building was used for providing enterprises with office spaces. The fire seems to have spread from an office space on the first floor from which a CCTV and Router manufacturing company was operating.

Is she the GF of Ivana Alawi’s brother? Heaven Peralejo refutes the rumor

Dansker er dømt til døden for dobbeltdrab i Nigeria

Twenty years on, Timorese-Australians look back on the struggle for independence

© Provided by Associated Press FILE – Jillian Hanesworth, with Open Buffalo, poses for a photo, Tuesday, May 17, 2022, in Buffalo, N.Y. “We see how Black and brown people get treated by the police,” she said, that police don’t hesitate to “take deadly action against Black and brown ...

Is Scott Disick Set to Attend Kourtney and Travis' Wedding in Italy?

Kris Jenner Steps Out in Style in Italy as Kourtney Kardashian's Family Arrives for Her Wedding: PICS

Hertz false arrests: Company yet to drop prosecution despite promise to do 'right' by customers

Chord Dasar Talking to The Moon - Bruno Mars, Kunci C: I Know You're Somewhere Out There

Is Sheena Bora Still Alive? Here's What Indrani Mukerjea Said When She Walked Out of Mumbai Jail

Everyday essentials you should be buying with your FSA