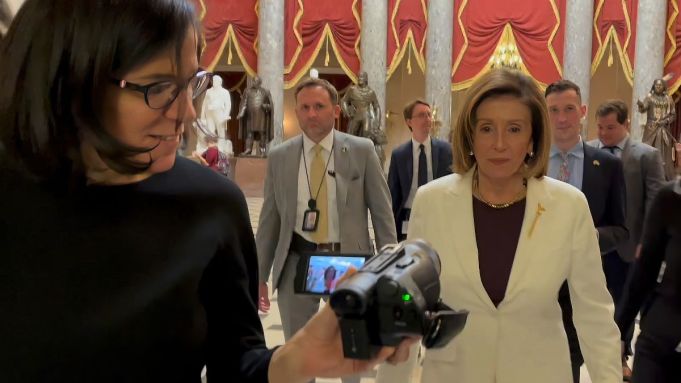 Pelosi In The House HBO

Director Alexandra Pelosi, daughter of outgoing House Speaker Nancy Pelosi, was following her mother when she was escorted out of Congress during the January 6 insurrection.

That footage, which was broken by CNN last month, saw Nancy Pelosi threaten to punch out former President Donald Trump as a result of his actions on that infamous day.

It has now emerged that the documentary film that Alexandra Pelosi was making will launch on HBO.

Pelosi In The House, which will launch on December 13, will see the Journeys with George director take a behind-the-scenes look at Nancy Pelosi, through her career milestones leading up to the inauguration of President Joseph Biden in January 2021.

The doc was filmed in a cinéma vérité style over the course of three decade.

It goes behind the headlines as it tracks Pelosi’s life in public office from her election to Congress in 1987 and becoming the first female Speaker of the House in 2007 through the 2020 election and President Biden’s inauguration. Following Pelosi at both work and home in real time during consequential political moments in the country’s recent history, the film offers a look at American politics through her efforts on the Affordable Care Act, the Covid-19 relief package, two impeachments as well as a record of the events of January 6, 2021, following Pelosi and other lawmakers at a secure location as the crisis unfolded.