A week after Hurricane Ian slammed Florida, search-and-rescue efforts are still underway and the death toll continues to rise.

Maj Gen. James O. Eifert, the Adjutant General for the Florida National Guard, spoke with ABC News Live Thursday and provided the latest updates on those efforts and the damage caused to the state. 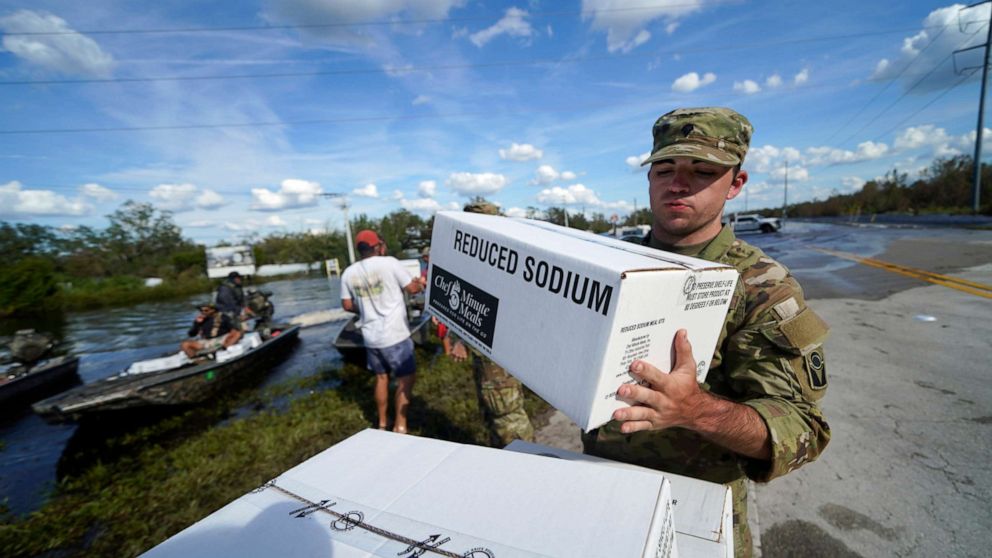 A member of the Florida National Guard helps stack emergency supplies that arrived by boat during flooding along the Peace River in the aftermath of Hurricane Ian in Arcadia, Fla., Oct. 3, 2022. Gerald Herbert/AP

ABC NEWS LIVE: A week has passed now since Hurricane Ian made landfall in southwest Florida. Can you assess for us where the recovery stands at this moment?

MAJ. GEN. JAMES O. EIFERT: Well, they're making great progress. We have about 17 urban search-and-rescue teams scattered throughout. Now they're kind of focused on the primary counties of Charlotte and Lee County. They've been on the Barriers Islands, the Sanibel and Captiva [islands], as well as Pine Island, doing a lot of tremendous work as well as they've spread out throughout Charlotte County, in Lee County, just to get through the initial hasty phase of the search-and-rescue effort, which initially kind of just speedily goes through the neighborhoods to see if there's any obvious signs of distress.

ABC NEWS LIVE: National Guard troops are still assisting in search-and-rescue efforts. We reported the death toll from Hurricane Ian in Florida jumped yesterday to at least 120 victims. Do you expect that number to continue to climb?

EIFERT: I would anticipate that it probably will. I think the search-and-rescue efforts have probably found the majority of the remains that are going to be found, but it's hard to say as they get through some of these more detailed looks at these immense areas of devastation and destruction. It would be hard to imagine that they won't find more.

ABC NEWS LIVE: And the National Guard is doing everything from helping search for survivors to clearing debris and roads and also serving food and water. What are the biggest challenges that residents and business owners are facing?

EIFERT: Well, the biggest challenges easily have been the outages of water and power. So especially on the islands like Sanibel, I visited it yesterday with the governor and it's hard to describe the destruction. We passed over a couple of times on helicopters, but you can't really get a feel for it until you actually get on the ground and you see just the amount of debris. 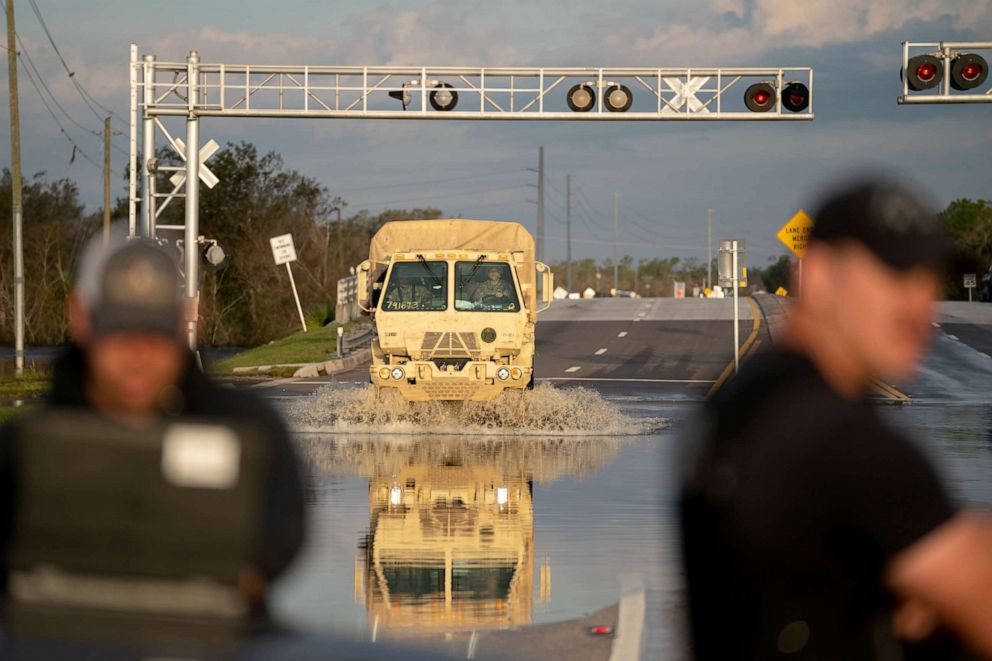 A National Guard vehicle drives through floodwaters from the Peace River on October 4, 2022 in Arcadia, Florida. Sean Rayford/Getty Images

ABC NEWS LIVE: Major, would you just be able to share on a personal level how long you've lived in Florida, if you've ever witnessed anything like this?

EIFERT : I was born and raised in Florida, actually. And I've I think, you know, this equates pretty closely to Hurricane Michael that we saw up in the Panhandle back in 2018. And the difference with this, though, is Michael was focused on a very small area. It was such an intense [Category] 5 storm that it just laid total waste and devastation to Mexico Beach and up around the Panama City area. But it was very focused in a small, about a 30-mile wide devastation field. And this one is just so much larger. [It] covers probably 100 miles of the coastline and plus what it did as it went inland and the amount of flooding that it caused all the way up and down the state. 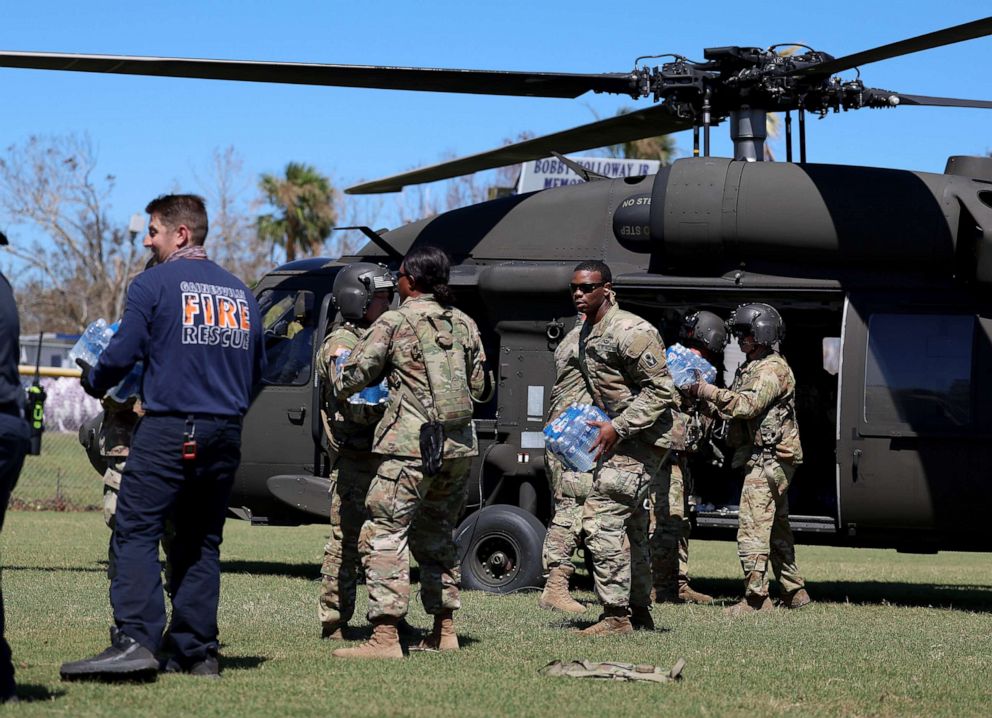 ABC NEWS LIVE: And there was a rare show of political unity when President Biden visited with Gov. DeSantis yesterday and toured the damage together. Talk about how people of Florida are coming together in this difficult time.

EIFERT: It's been remarkable, the resiliency, really. There have just been so many stories every day there's another story of just an amazing group of people that have come down.

A great example is this airboat club that lives up in Tampa. They just decided they're all going to get their airboats and bring them down to Harty County, which is a long way from Tampa. And they brought them down there. They launched them in the water, and they just went around saving people without any and nobody asked them. Nobody was paying for their gas or their travel time or their time away from work. They're just doing it because it's like 30 of those guys running around just saving people and bringing them commodities and those kinds of things. So there are hundreds of examples of people like that that are just reaching out to their neighbors and showing them love. And it's really inspiring for all of our people.

FILE PHOTO: Pre-election rally held in support of Republican candidates in Dayton Donald Trump was ridiculed ruthlessly on social media after a disaster day saw three legal rulings against him. Social media was rife with jokes about “ketchup on the walls” and #ketchup started trending as soon as it ...