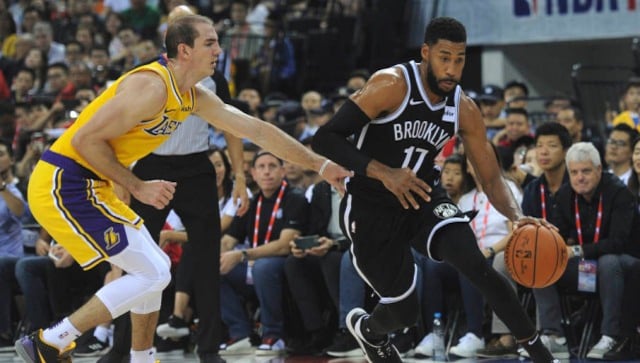 Brooklyn Nets' Garrett Temple (R) in action against Los Angeles Lakers during a match at the NBA China Games 2019 in Shenzhen. AP

Washington: Japan’s Rui Hachimura and France’s Killian Hayes will have the chance to play before their home-nation fans with the NBA Global Games resuming next month after a two-year layoff due to the Covid-19 pandemic.

Pre-season contests are set for Japan and Abu Dhabi while Paris and Mexico City will host regular-season games as the NBA, with nearly 70 percent of social media followers from outside the United States, sends superstars to thrill its worldwide audience.

“We’re so excited to be bringing our live games back to our fans around the world,” NBA deputy commissioner Mark Tatum told AFP on Thursday.

“It’s a way for us to bring cultures together, to bring people together and to bring our fans together.”

Though NBA game telecasts were already viewed by fans in 214 nations and in more than 50 languages last season, Tatum says the return to live games overseas is “an important part of our business strategy.”

“There’s nothing like going to an NBA game for the hundreds of millions of fans around the world and we want fans to experience the game live.”

The NBA, with 25 percent of players from outside the United States, felt that this season teams could comfortably and confidently return overseas after a two-year hiatus due to Covid-19.

“It has been very difficult over the last two years with the pandemic,” Tatum said. “Our first and foremost concern is to have games where we can conduct them in a safe and secure manner.”

The NBA, with 97 percent of players and 100 percent of staff vaccinated, consulted doctors, medical specialists and officials in each city before finalising the global schedule.

“We’ve learned, as the world has learned, to move on with Covid and this is the right time,” Tatum said. “We’re able to bring back the games. We’re confident we can keep everyone safe and healthy.”

That includes the Milwaukee Bucks, led by Giannis Antetokounmpo, and Atlanta Hawks playing the first NBA games in the Arabian Gulf when they meet for pre-season games 6 and 8 October in Abu Dhabi.

“They have got a world-class facility,” Tatum said. “They know how to do it well.”

“With the pride they have for him, it’s going to be huge there,” Tatum said. “These things matter. It’s going to excite people.”

Tatum expects much the same thrill when the Chicago Bulls meet Hayes and the Detroit Pistons in a regular-season game at Paris on 19 January.

“For Killian Hayes to play in his home country is going to be tremendous,” Tatum said.

The Miami Heat and San Antonio Spurs will meet in Mexico City in a regular-season game on 17 December.

More global games are in the works, Tatum said, noting, “There are more markets that want games than we can have them.”

“The world is a big place. We’ve played in a lot of places but there are still a lot of opportunities.”

Germany, Italy and Greece are among several European possibilities while London has hosted several contests.

In total, the league has played 205 games in 20 nations outside US and Canadian cities since 1978.

“At some point we will be back in India,” Tatum said, adding, “I could see pre-season, regular-season games in Africa.”

In the 2019-20 season, the last before the pandemic struck, the NBA played pre-season contests in India, Japan and China and regular-season games in Mexico and France.

Last season, the NBA had a record 121 international players from 40 nations, with 18 from Canada and seven from Germany.

The past four NBA Most Valuable Player awards were won by Serbian Nikola Jokic of the Denver Nuggets in 2022 and 2021 and Greek star Antetokounmpo of Milwaukee in 2019 and 2020.