Last week, Netflix quietly released Monster: The Jeffrey Dahmer Story, a series about notorious serial killer Jeffrey Dahmer. Between 1978 and 1991, Dahmer murdered 17 men and boys, the majority of whom were queer and Black or Brown. The 10-part series focuses on Dahmer’s upbringing, trial, and narrative of the vulnerable victims he groomed and manipulated.

I believe this series is pointless and futhermore, hurtful. No new perspectives or interviews from those directly impacted (who this production claims it intended to prioritize) were included. In line with my own concerns, the series has received backlash because its necessity is in question.

The series further desensitizes viewers to a serial killer by compacting the story, making it inaccurate.

“Given [Ryan] Murphy’s history of disrespecting the LGBTQ+ community, it was irresponsible to allow him to produce Dahmer.”

The co-creator of the series, Ryan Murphy, has been repeatedly critiqued for how he narrates gay storylines. For the second-ever episode Pose, he was slammed for centering the story around Black gay men’s trauma. His musical The Prom was also called distasteful for curating the scene of a teenager being bullied for ‘coming out’ as goofy. Murphy was also called out for American Horror Story: Hotel for showing a gay character being gruesomely sexually assaulted.Murphy, who is gay, is usually unresponsive to the criticism but when he does address horrific scenes, he justifies them. With the American Horror Story: Hotel scene in particular, in an interview with Entertainment Weekly, he said that it was supposed to represent the “terror and that hold that [addiction] has over people.” Ryan Murphy seems to believe grisly scenes add value to his story-telling. It’s a part of his brand and what differentiates him from other writers.

Given Murphy’s history of disrespecting the LGBTQ+ community, it was irresponsible to allow him to produce Dahmer. 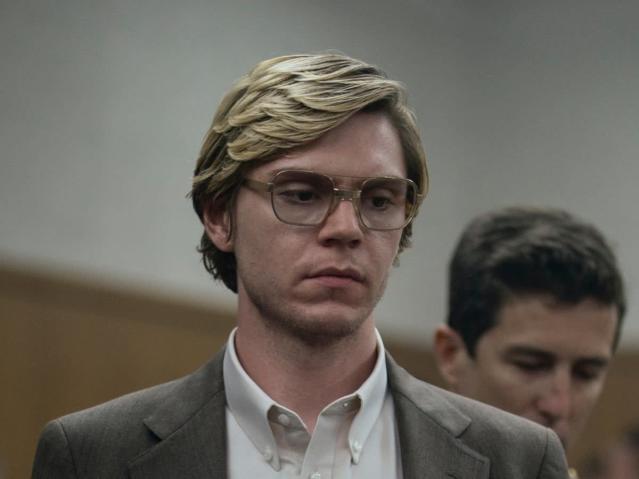 The series also made it appear as if Dahmer’s choice of men was coincidental—but it wasn’t.

The first several episodes revolve around the killer’s childhood and his inability to adapt to society. As a result, he’s in between low-end employment and can only afford an apartment in a Black neighborhood in Milwaukee, Wisconsin. In episode five, a Black detective questions Dahmer about purposely moving to an ‘under patrolled and underserved’ community, ‘targeting’ his victims to get away with crime easily. The series portrays Dahmer as shocked that it was an accusation. He said, “It was just about if I thought they were beautiful,” and that the apartment was “all he could afford.”

When you look at the historical context though, it can be perceived that Dahmer consciously targeted queer men of color and Black men.

“Black gay men were an especially vulnerable group during this era.”

In the 1980s, there was a 49 percent increase in Black people living in poverty across cities in the United States from “Reagan’s Recession.” In addition to the economic crisis, the HIV/ AIDS epidemic was flaring. It was commonly referred to as the  “gay mans disease” and stigmatized the gay community. Black gay men were an especially vulnerable group during this era. Dahmer would seduce gay men by offering them money for photographs. Dahmer did not address this background, which provides more insight as to why Dahmer’s victims might have considered going with him. That background would have personified his victims more, but it’s clear this series wasn’t for them—or their loved ones.

The series was created without the consent of the victims’ families. The viral scene of Rita Isbell, the sister of Errol Lindsay, delivering her victim impact statement was accurate in its re-creation. Yet, Isbell had no idea the film was being produced. “When I saw some of the show, it bothered me, especially when I saw myself — when I saw my name come across the screen and this lady saying verbatim exactly what I said,” she told Insider.

I’m not telling anyone what to watch, I know true crime media is huge rn, but if you’re actually curious about the victims, my family (the Isbell’s) are pissed about this show. It’s retraumatizing over and over again, and for what? How many movies/shows/documentaries do we need? https://t.co/CRQjXWAvjx

Netflix did not consider how chilling it would be for the victims’ families to see heart-wrenching memories turned into entertainment. They were too worried about “getting paid,” Isbell also said to Insider.

“From their actions and the content, it’s clear this show was not for the victims, it was for views.”

Dahmer did attempt to address some aspects of the political and social climate at the time. It shows Milwaukee police ignoring the calls of Dahmer’s neighbor, Glenda Cleveland and law enforcement dismissing a victim’s Laotian American family. It also shows the military giving Dahmer a slap on the wrist when two men accused him of sexual assault while he was in the military. While these moments were approached with care and accuracy, they are juxtaposed with attempts to humanize the killer. That choice dismisses the impact of his actions.

We should not be desensitized to the pain Dahmer caused because the story has acclaimed actors and flashy production. How and why podcasts, films, docuseries and more media continue to sensationalize Jeffrey Dahmer is disheartening. True crime is popular, and Netflx’s audience demands it—but this show’s approach is inappropriate and irresponsible. It is marketed as a project that focuses on “centering victims and unsung heros.” Meanwhile, the victims’ families were not notified of its production nor asked to participate. Netflix turned real-life murders into content. From their actions and the content, it’s clear this show was not for the victims, it was for views.

Tic-tac UFO Sighting in the Daytime Skies of Bradenton Florida

Do you know what it is? How do you tell your best friend you have to hang up so you can record a UFO dashing across the sky? This woman did just that to catch a flying saucer before it disappeared behind a house. She zooms all the way ...

Ford Gets a Big Win

Ancient viruses gave us a gene called "Arc" — and it may explain consciousness, scientists say

Spotlight on a virus sporeGetty Images/Andriy Onufriyenko What does it mean to exist? The French Enlightenment philosopher René Descartes famously observed that every self-aware being is able to declare, figuratively if not literally, the Latin statement “Cogito ergo sum” — that is, “I think therefore I am.” Descartes profoundly transformed ...

Update: One person hurt in shooting at Palmer Township Wawa

Palmer Township police are investigating a shooting Tuesday night in the parking lot of the 25th Street Wawa that sent one person to the hospital. Chief Wayne Smith said officers were dispatched to a report of gunshots at the parking lot. They found three men involved in an altercation who ...

Link video: http://nbclim-download.edgesuite.net/Prod/NBCU_LM_VMS_-_KXAS/308/35/CR_What_to_Buy_in_December__217111.mp4 NBCUniversal, Inc. If you feel like you’ve missed out on Black Friday and Cyber Monday savings, Consumer Reports says don’t fret. These seasonal sales often extend into the month of December, so you can save money and check things off that long gift list just in ...


View more: There Are Still Things You Can Save on With Seasonal Sales in December

SF Giants land coveted free agent OF (but sorry, it's not Aaron Judge)

The Last 747 Ever Built Has Rolled Off Boeing's Production Line

Thieves drove car into pot shop, shot it out with guard. Now an arrest has been made

Queens man recounts night he was drugged and robbed of $2,000 after going to Hell's Kitchen nightclub

Where does the airport go from here after city approves new contract?

Woman Beaten to Death With Unknown Object in Philly Home

Robert Downey Jr. Is Now Speaking Up About Quentin Tarantino

Driver Pulls Over to Record Bigfoot Walking Through Open Field

How safe is the tap water on Long Island? New map shows amount of toxic chemicals

REVEALED: Late 'Fame' Star Irene Cara Was A 'Recluse' Who 'Didn't Talk To Anyone' Before Her Mysterious Death At 63

Jamie Dimon says Americans are spending all their money because of inflation—and that could tip the U.S. into a recession next year

Jim Cramer Says Crypto Is A 'Gigantic Con': Why He Sold Bitcoin, Ethereum Near The Top

Black Santa, the KKK and why Justice Samuel Alito is facing calls to leave the Supreme Court

Housing Market Predictions For 2023: Home Prices Set To Fall For The First Time In A Decade