Attorney Anthony T. DiPietro believes the first weekend of lawsuits under the state’s Adult Survivors Act are just the tip of the legal iceberg.

“I have over 40 new clients, and there’s thousands more out there,” said DiPietro on Saturday. “It’s just amazing. Frankly, it benefits everyone when these sexual predators are held to account.”

There were already some headline-making cases among the initial suits filed when the one-time, one-year window for legal action opened across New York State at 12:01 a.m. Thursday. The most prominent featured ex-President Donald Trump in a decades-old rape case and two banks accused of enabling billionaire Jeffrey Epstein’s abuse of under-aged victims. 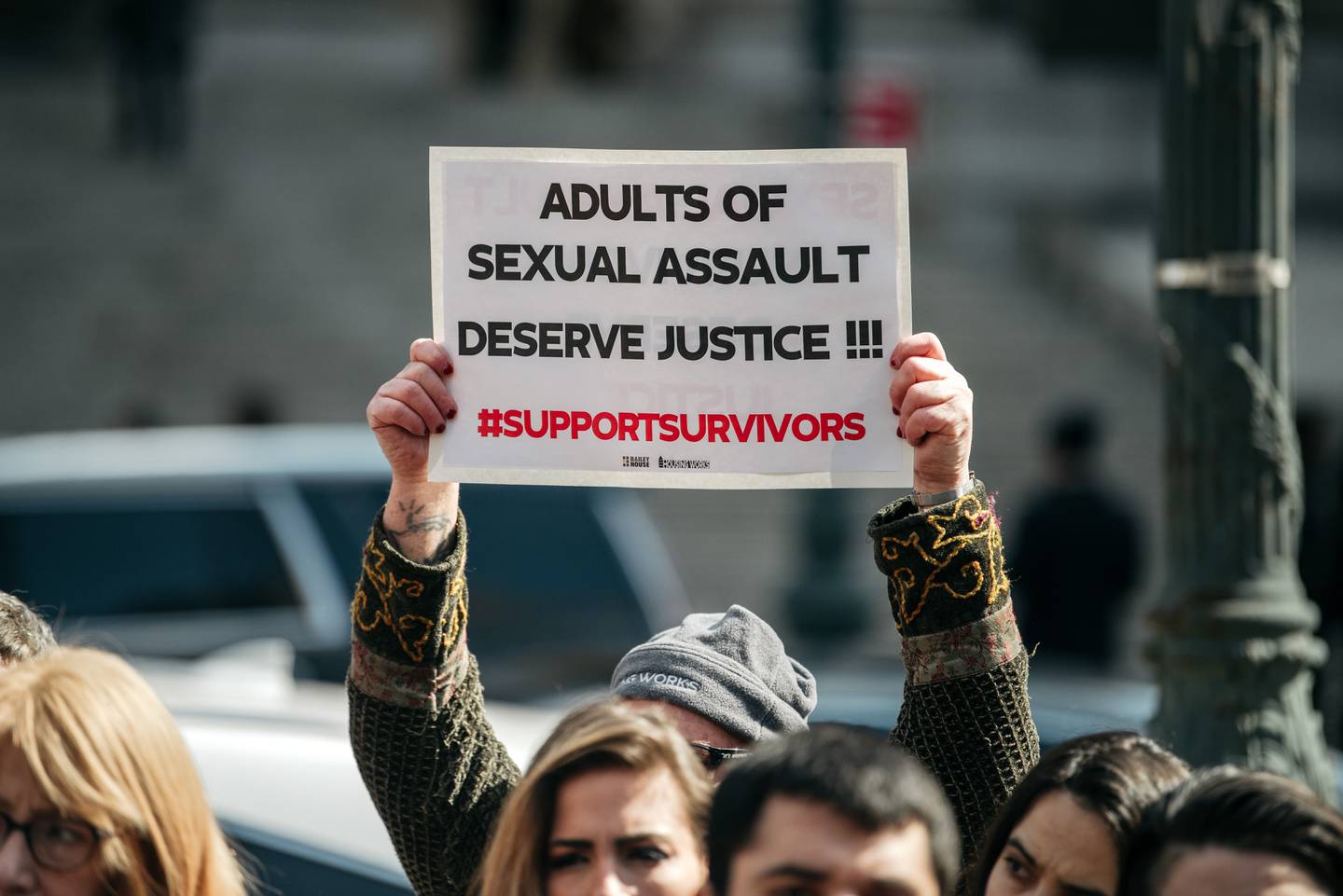 A demonstrator holds a sign overhead at a rally in support of the Adult Survivors Act in New York City on Feb. 28, 2020. (Scott Heins/Getty Images)

DiPietro has already filed a pair of suits against hospitals where disgraced Dr. Robert Hadden, once described by a prosecutor as a “predator in a white coat,” was charged with sexually abusing his patients over three decades.

The 64-year-old Hadden, who cut a plea deal in an earlier abuse case, is currently facing another Manhattan trial in 2023 for sexual misconduct under the guise of medical treatment. And he’s already responsible for $236 million in payouts in two recent settlements linked to the physician who hurt rather than heal those in his care. Lawsuits were also expected under the act from than 750 women alleging sexual assaults inflicted from across the state’s correctional facilities while imprisoned, their attorneys said.

“There’s so much literature out there talking about how long it takes victims and survivors to process what happened and take action,” said DPietro. “We need to be able to give people space and time they need to process the trauma.”

Lucien Chalfan, spokesman for the state court system, said it was unclear Saturday how many suits were filed in the first three days of the window that runs through November 2023.

“We won’t know until early next week,” he said. 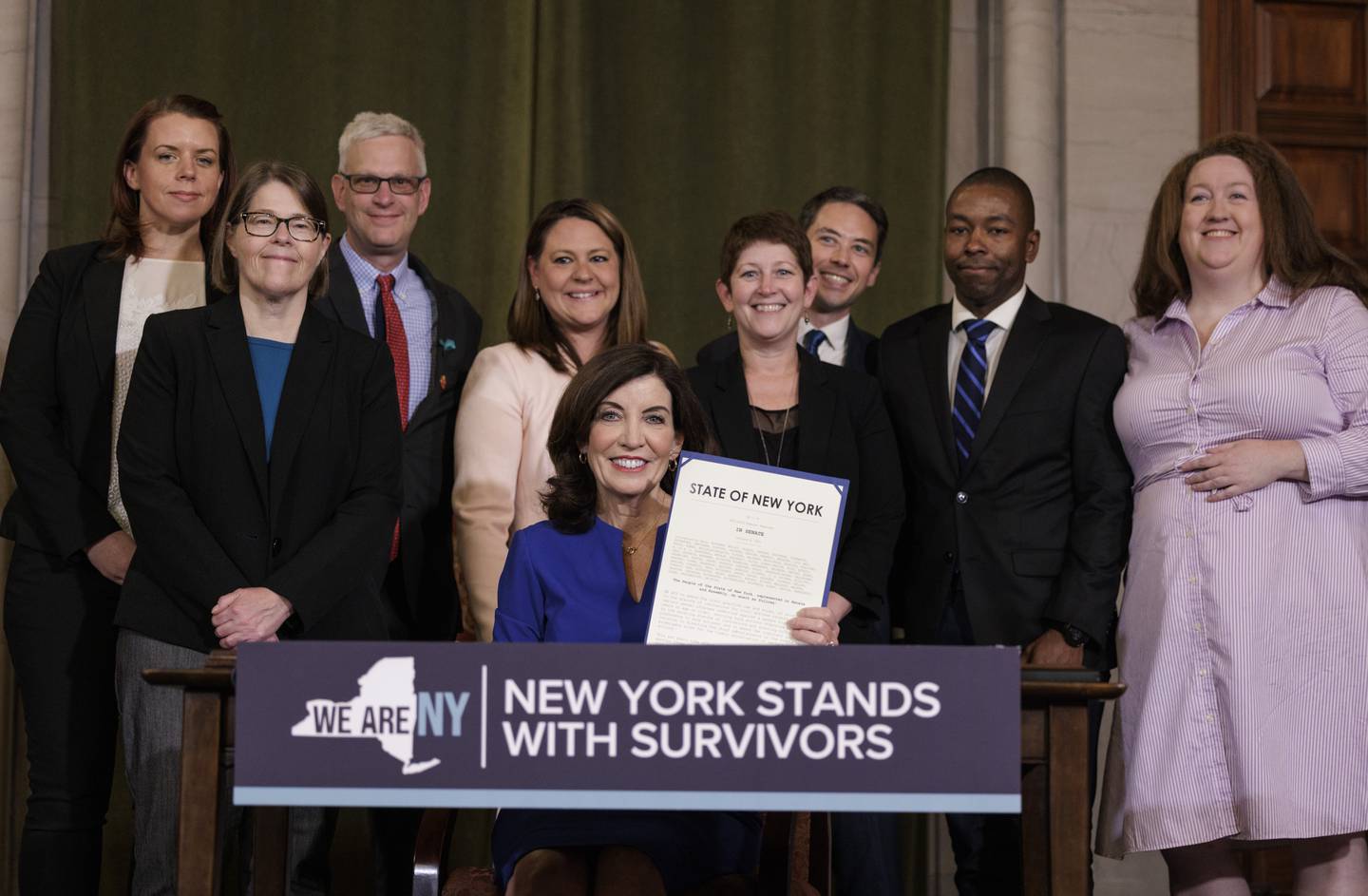 Governor Kathy Hochul signed the Adult Survivors Act at the State Capitol in Albany on May 24, 2022. (Mike Groll/Office of the Governor)

In the Trump filing, writer E. Jean Carroll accused the former Manhattan businessman-turned politician of raping her inside a dressing room at Bergdorf Goodman in the mid-1990s. Her lawsuit seeks unspecified monetary damages, with a Trump attorney describing the legal action as an “abuse of the purpose of this Act.”

The 78-year-old Carroll is already suing Trump for defamation after the ex-president called her a liar for making the allegation in 2019.

“She completely made up a story that I met her at the doors of this crowded New York City Department Store and, within minutes, ‘swooned’ her,” said Trump. “It is a Hoax and a lie, just like all the other Hoaxes that have been played on me for the past seven years.” 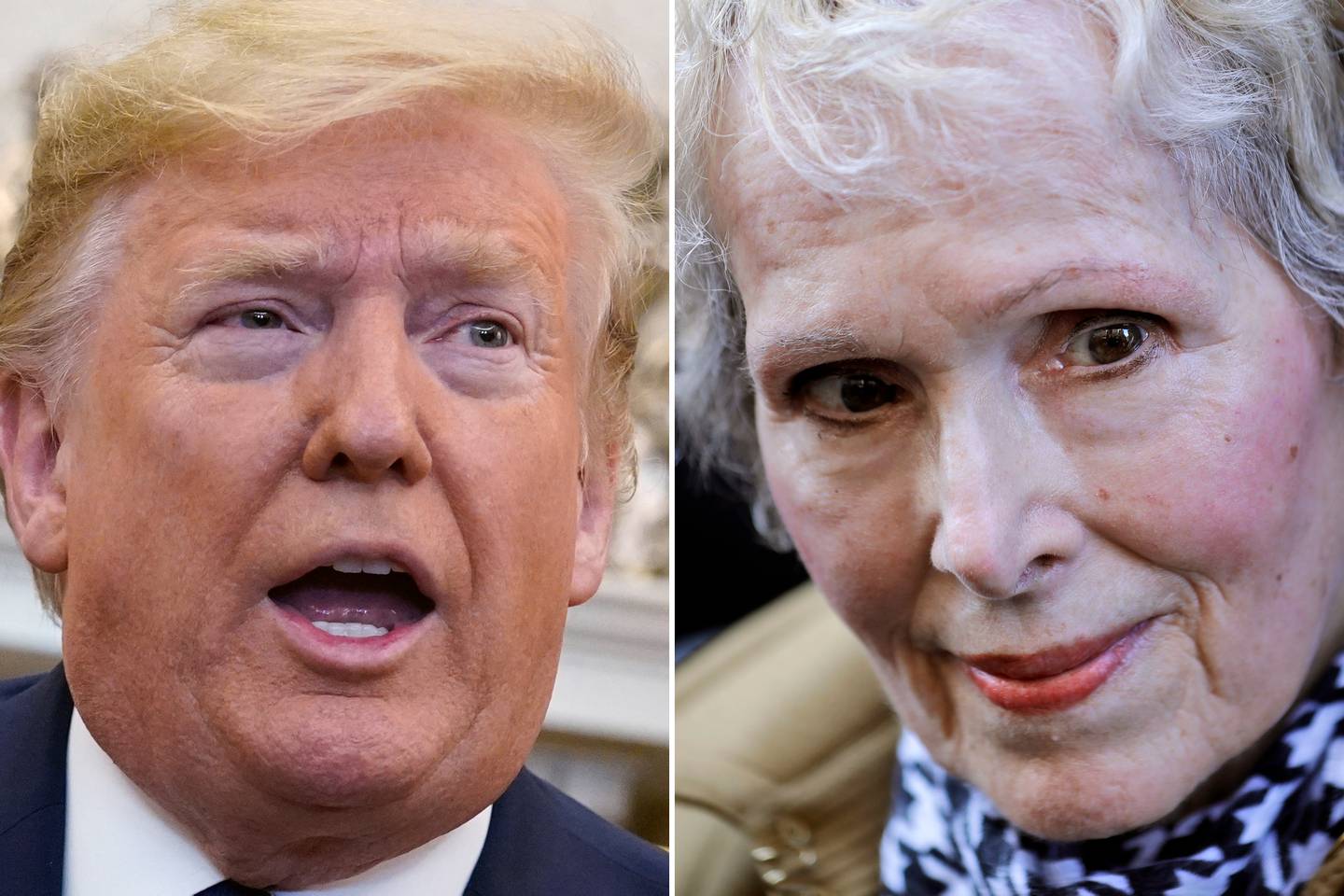 In the Epstein-linked cases, brought in Manhattan Federal Court, both JP Morgan Chase and Deutsche Bank were charged in separate filings with turning a blind eye to his sexual pursuits of young women.

“JP Morgan cared about one thing — profit — and showed absolute loyalty to Epstein,” the suit alleged.

DiPietro lays much of the blame on organizations that turned a blind eye to what was happening as alleged in the lawsuit against the banks and the settlements with the hospitals.

“We’re in the early stages of a long overdue cultural shift, and it’s important to tell these stories,” said DiPietro. “I’m grateful for everyone coming forward.”

Apple could topple Samsung in global smartphone market in Q4 2022

The global smartphone market isn’t seeing happy numbers due to sluggish demand following the economic downturn and inflation reaching record highs in many countries. Amidst this, a research report by market research firm TrendForce notes that Apple is all set to dethrone South Korean giant Samsung in terms of ...

vivo has released the vivo Y35 5G in China, the company’s latest offering in the affordable smartphone segment. A refresh of the Y35 LTE released back in August, the updated version comes with a better CPU and as its name would suggest: 5G connectivity.  According to the vivo official ...

The Vivo X90 5G smartphone appeared on the BIS (Bureau of Indian Standards) website ahead of its impending launch in India. To recap, the Vivo X90 series went official in China last month. Now, it looks like Vivo is gearing up for the X-series smartphone’s India launch. Notably, the X90 ...

Vivo has a new member as part of its budget Y smartphone series in India. The new Vivo Y02 has made its entry with Android 12 Go Edition, which is a version of Android meant for low-budget smartphones. Read on to know what features and specs the phone possesses. ...

The VIVO X90 series of flagship phones was launched a few days ago. The top-end model in the lineup is the VIVO X90 Pro+. But at the launch, VIVO didn’t disclose what chip the phone comes with. We had assumptions that it was the Snapdragon 8 Gen 2. But there ...

The Vivo Y35 5G smartphone has appeared on the TENAA certification website before going official in the coming days. To recap, Vivo launched the Y35 smartphone back in August. Now, it looks like a 5G-ready version of the handset dubbed Vivo Y35 5G will hit the store shelves soon. According ...

The Vivo X90 series of smartphones’ specifications have popped up on the internet ahead of an official unveiling. Vivo is likely to launch three premium smartphones under the X90 series next week. Notably, the X90 lineup comprises the Vivo X90, X90 Pro, and X90 Pro+. Vivo has confirmed the X90 ...

When will Chinese Android manufacturers get it that specs don’t matter all that much?

Survivor Series live telecast in India: When & where to watch WWE's pay-per-view live?