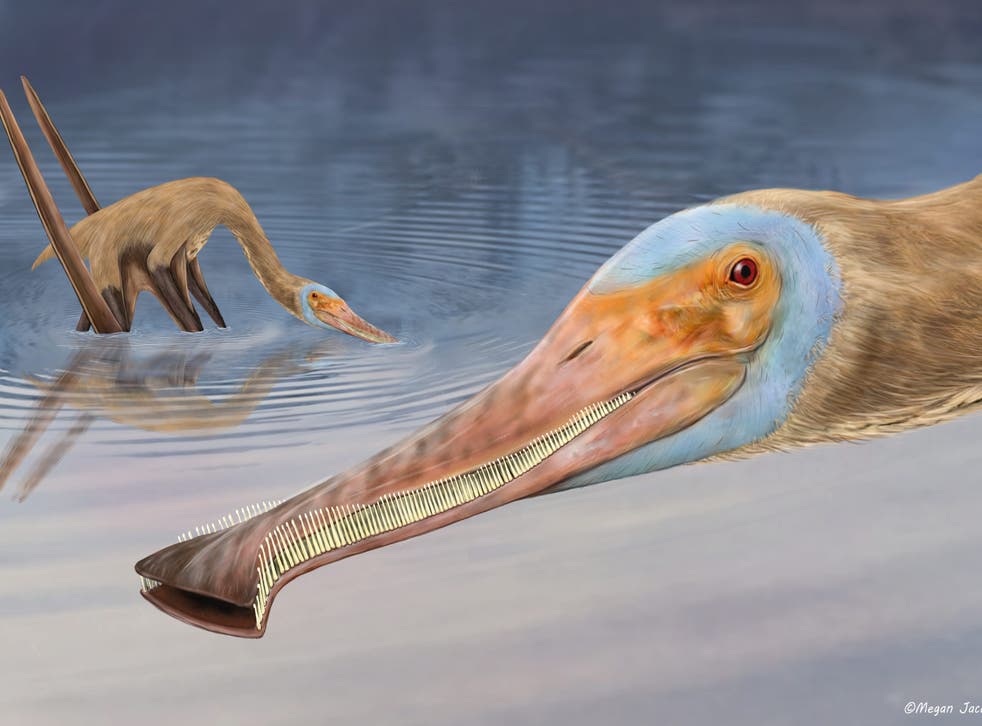 A new species of dinosaur with more than 400 teeth which ate in a similar way to ducks and flamingos has been discovered in Germany.

The fossil of the nearly complete Balaenognathus maeuseri, part of the pterosaur family, was discovered accidentally in a Bavarian quarry while scientists were excavating a large block of limestone containing crocodile bones.

Since the first pterosaur was discovered in Bavarian limestone in the 18th century, hundreds of remains of the flying reptiles have been unearthed, making the quarries of the Franconian Jura one of the richest pterosaur localities in the world.

The research was led by Professor David Martill of the University of Portsmouth, Hampshire, and involved palaeontologists from England, Germany and Mexico.

“The jaws of this pterosaur are really long and lined with small, fine, hooked teeth, with tiny spaces between them like a nit comb.

“The long jaw is curved upwards like an avocet and at the end it flares out like a spoonbill. There are no teeth at the end of its mouth, but there are teeth all the way along both jaws right to the back of its smile.

“What’s even more remarkable is some of the teeth have a hook on the end, which we’ve never seen before in a pterosaur ever.

“These small hooks would have been used to catch the tiny shrimp the pterosaur likely fed on – making sure they went down its throat and weren’t squeezed between the teeth.”

The animal likely dabbled as it waded through shallow lagoons, sucking in tiny water shrimps and copepods and then filtering them out through its teeth in the same way as ducks and flamingos.

The name “Balaenognathus” roughly translated means whale mouth because of its filtering feeding style, while the specific name “maeuseri” is in honour of co-author Matthias Mauser, who died during the writing of the paper.

Prof Martill said: “Matthias was a friendly and warm-hearted colleague of a kind that can be scarcely found. In order to preserve his memory, we named the pterosaur in his honour.”

The paper, A new pterodactyloid pterosaur with a unique filter-feeding apparatus from the Late Jurassic of Germany, is published in Palaontologische Zeitschrift.

The specimen is currently on display in the Bamberg Natural History Museum in Germany.

The Giacometti chandelier (pictured) was made in the 1940s (Christie’s/Getty) A “rare and prestigious” chandelier picked up by an English painter for £250 in the 1960s could be sold for millions. John Craxton suspected the unusual chandelier was the work of Alberto Giacometti when he saw it at an ...


View more: Chandelier bought for £250 in antique shop set to sell for millions

Luke hopes to hire staff and open his own shop (Picture: James Linsell-Clark/ SWNS) An eleven-year-old schoolboy has made £1,000 by selling nut-free pick-and-mix sweets. Luke Scotney, who has a severe nut allergy, has long been frustrated at the lack of sweets available for those with his condition. He ...

Fashion retailer ASOS is beloved by many online shopping addicts for its extensive range and speedy service, especially when using next day delivery. Loyal fans of the site can sign up to ASOS Premier and get next day delivery by paying for a membership with the retailer, but a shift ...


View more: But will it go viral? TikTok CEO to testify before Congress over national security concerns - House Foreign Affairs expected to vote on blocking video-sharing app in the U.S.

Who knows exactly when double rapist Adam Graham realised he wanted to be a woman known as Isla Bryson, but hundreds of thousands of supposed transphobes can hardly be blamed for thinking it was around the time he knew there was a high chance a significant proportion of his life ...


View more: Nicola Sturgeon: Will SNP rebels oust First Minister before she drives Scotland off a cliff like Thelma and Louise? – John McLellan

EXCLUSIVE: Inside story behind gossip columnist's grovelling apology to celebrity accountant Anthony Bell over Michael Clarke's Noosa meltdown - as the size of his secret payout is revealed

'She's insulted all of France!': Sacre bleu... Eva Green has the French choking on their croissants after blaming her 'Frenchness' for series of insults she fired off at film producers