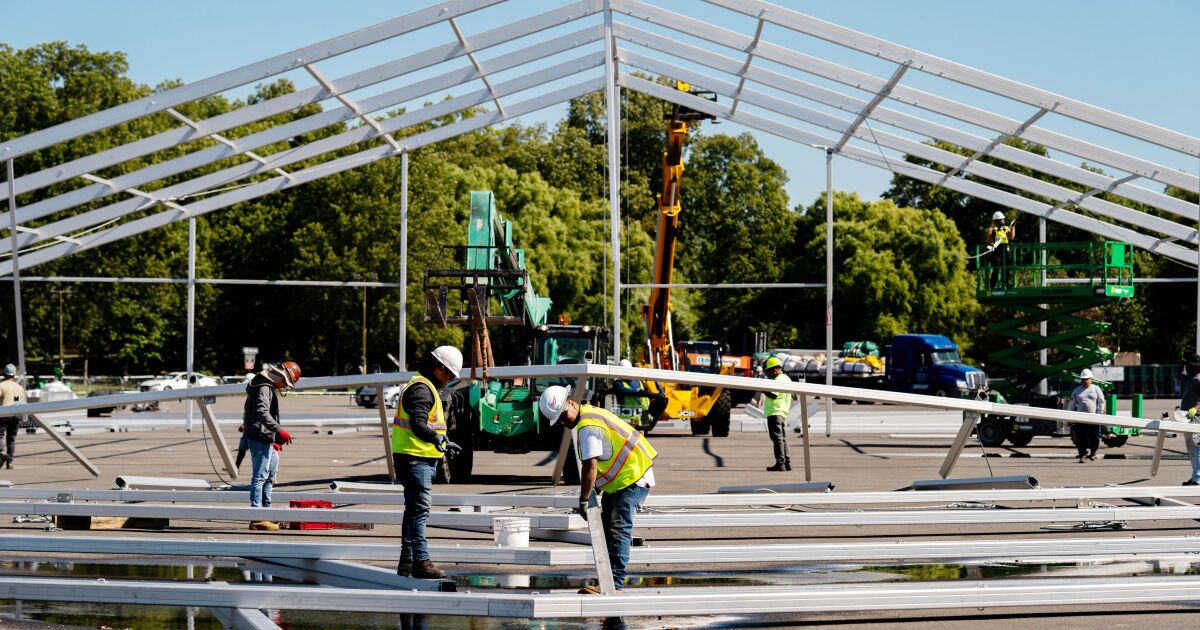 New York City’s mayor declared a state of emergency on Friday over the thousands of migrants being sent from states on the southern border since the spring, saying the demand being put on the city to provide housing and other assistance is “not sustainable.”

“A city recovering from an ongoing global pandemic is being overwhelmed by a humanitarian crisis made by human hands,” Mayor Eric Adams said. “We are at the edge of the precipice. … We need help. And we need it now.”

By the end of its fiscal year, Adams said the city expected to spend $1 billion helping the new arrivals, many of whom are heavily reliant on government aid because federal law prohibits them from working in the U.S.

The administration did not specify what costs are being included in that amount.

Adams, a Democrat, said the new arrivals are welcome in the city. And he spoke with pride of New York City’s history as a landing spot for new immigrants.

“New Yorkers have always looked out for our immigrant brothers and sisters. We see ourselves in them. We see our ancestors in them,” he said.

But, he said, “though our compassion is limitless, our resources are not.”

New York City’s already-strained shelter system has been under even greater pressure for much of this year because of the unexpected increase of those needing help.

An average of five or six buses of migrants are arriving per day, Adams said, with nine on Thursday alone. Many of the buses have been chartered and paid for by Republican officials in Texas and Arizona who have sought to put pressure on the Biden administration to change border policies by sending migrants to Democratic-leaning cities and states in the North.

One out of five beds in New York City’s homeless shelter system is now occupied by a migrant, and the sudden influx has swelled its population to record levels. The city has opened 42 new, temporary shelters, mostly in hotels, but Adams said more would need to be done.

On Friday, he said that included city agencies coordinating to build more humanitarian centers; fast-tracking New Yorkers from shelters to permanent housing, which would clear space for new arrivals to the city; and putting together a process for New Yorkers who have extra room to house those in need.

City officials estimated that about a third of migrants who arrive in New York City want to go elsewhere.

Adams said New York would continue to do what it could.

“Generations from now, there will be many Americans who will trace their stories back to this moment in time,” he said. “Grandchildren, who will recall the day their grandparents arrived here in New York city and found compassion, not cruelty, a place to lay their head. A warm meal. A chance at a better future.”

Deadline Roll up, roll up, Insiders. The Deadline International team have once again been travelling the world to bring you the latest news and analysis from the global film and TV biz, with Mel and Zac both in the Middle East. Max and I actually found the TV world ...


View more: 'Are we free to say Jews will not replace us?' Geraldo Rivera rebuffs Jeanine Pirro's defense of hate speech

Check out the companies making headlines before the bell: Marvell Technology (MRVL) – The chip maker’s stock slid 4.9% in the premarket after quarterly sales and profit fell short of Wall Street estimates. Marvell also issued a weaker than expected outlook. Inventory reductions by its customers are hurting results, ...

Oops! Something went wrong. Please try again later. Many of us will have heard our fair share of dad jokes in the past. Whether it’s round the dinner table or out shopping, dads seemingly have an endless supply of ~jokes~ up their sleeves that come out at the best ...

Royal biographer William Shawcross, 76, rushed to defend his pal Lady HusseyHe branded her 'painful' departure from royal household a 'personal tragedy'PM Rishi Sunak said he has been victim of racism and that 'the job is never done'

Why is Netherlands called Holland? Explaining the name of USA’s World Cup opponent What’s in a country’s name? Oftentimes, it’s a reflection of a nation’s past, as well as a nation’s future. Burkina Faso, for example, translates to “Land of Incorruptible People.” Sometimes, though, it highlights a country’s geography, ...

Should England and Senegal drag one another to the familiar realm of penalties on Sunday, whichever unlucky soul should end up the villain will not be short on sympathy from either dugout. For Gareth Southgate and Euro ’96, read Aliou Cisse and the 2002 Africa Cup of Nations; for Wembley, ...

An AC-130J Ghostrider gunship over in Wisconsin in July 2021. US Air Force/Senior Airman Miranda Mahoney The US Air Force’s AC-130 gunship has a reputation for delivering firepower to the battlefield. Two AC-130Js used a more subtle tool to aid US forces on the ground during the evacuation of ...


View more: Caught in 'the green beam': How US Air Force gunship crews let a target know they have it in their sights

What do L.A.’s super-rich car owners do for a living? A viral TikToker’s quest to find that answer

The Midnight Club Won't Get A Season 2 On Netflix