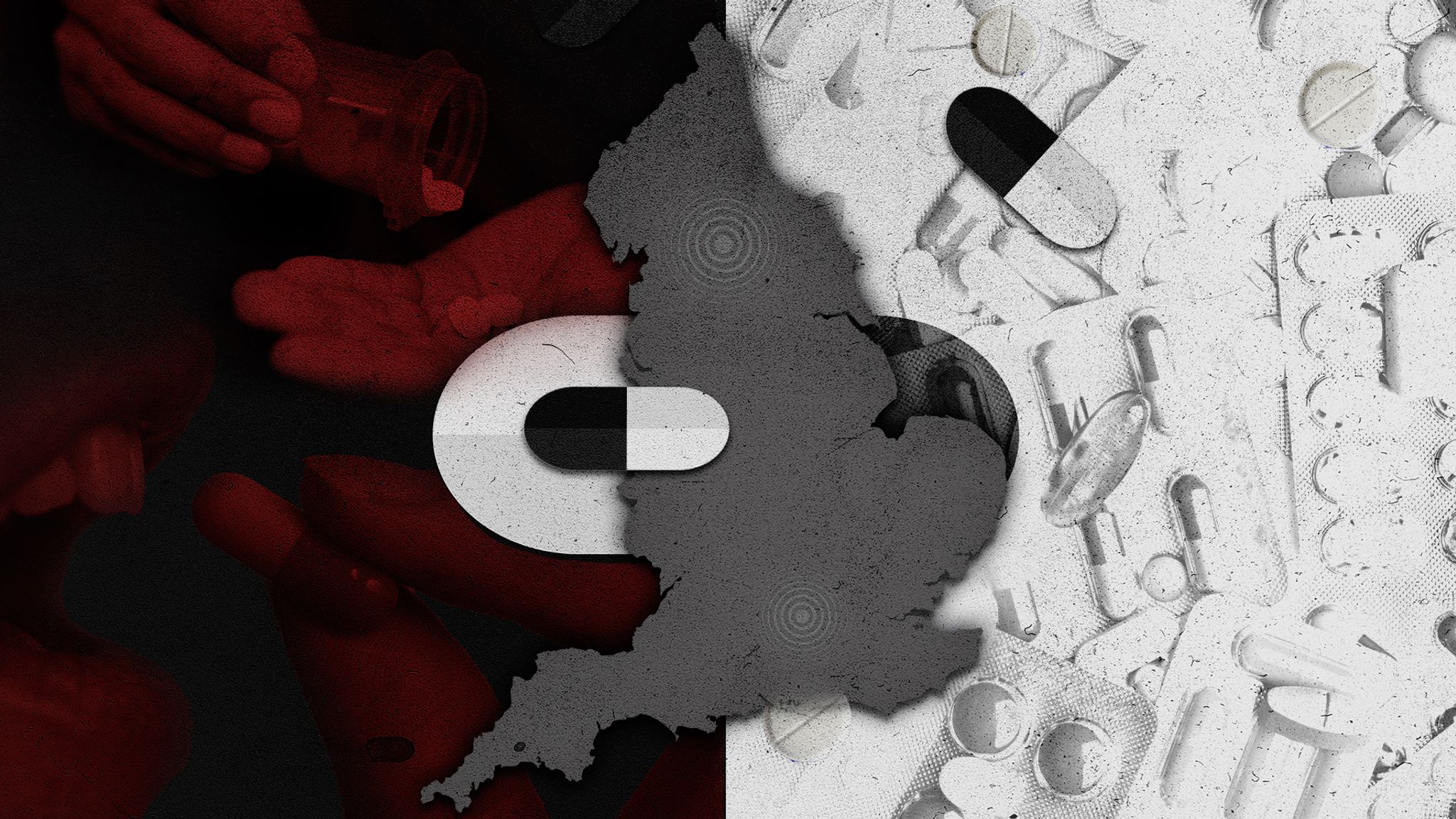 A north-south divide over the prescription of high dose opioids and other painkillers has been revealed by Sky News research.

The findings are being described as a “time bomb” of potential addiction problems.

In the North East, the amounts prescribed are three times more per head than in London, according to data collated from Open Prescribing.

For example, a practice in Durham with 18,000 patients prescribes over 1.2 million milligrams of opioids a month, (the rough equivalent of 42,000 strong tablets).

An average UK practice of the same size would prescribe about 480,000 milligrams per month (about 16,000 strong tablets).

The region’s lead pharmacist told Sky News: “We’ve all got to re-educate ourselves” about the potential harms of over-prescription.

Social workers and other professionals say that GPs are creating the clientele for a growing black market in prescription drugs, and there is a lack of services to help people with their addictions.

While opioid use has fallen slightly in recent years – prescriptions of other painkillers such as pregabalin are on the increase. Image: Justine Grant beat an additcion to heroin and was clean for 12 years, but says the drug her doctor later prescribed for pain relief was an even greater challenge

Patients have told Sky News that they struggled to beat their addiction and often turned to illegal dealers to top up their medication.

Justine Grant, from Sacriston, near Durham beat an addiction to heroin and was clean for 12 years, but says the drug her doctor later prescribed for pain relief was an even greater challenge.

She said, “I said I need something like ibuprofen but maybe a bit stronger, and that’s when they prescribed us the pregabalin. It’s very, very addictive. More addictive than anything I’ve taken in my lifetime.”

“I immediately got addicted to one of those a day, and then two and then three and then four. Up until I was taking ten a day. I don’t know how I’m alive.”

Justine was topping up her prescriptions using drug dealers, taking 3,000 mg of the drug a day, costing her £25.

Pregabalin works on nerve pain by affecting messages travelling through the brain and down the spine.

The drugs information site Frank says it produces feelings of euphoria, relaxation and calmness; and can heighten the effects of other drugs.

Pregabalin and opioids taken together can cause people to stop breathing.

The NHS recommends it is not stopped suddenly as withdrawal could cause anxiety, insomnia, nausea, pain and sweating.

Officials who draw up prescribing guidelines at NICE have made it a class C drug and warn GPs to look out for signs of dependency and abuse.

She added: “Everybody’s getting them. The doctors think they’re the new wonder drug and they can’t see the problems they’re causing.”

Advice published by NHS England eight years ago warns doctors that this this type of drug “can lead to dependence and may be misused or diverted”.

It also says that the drug is used as a “commodity for trade” in prisons.

‘What will my little girl do if I don’t wake up?’ 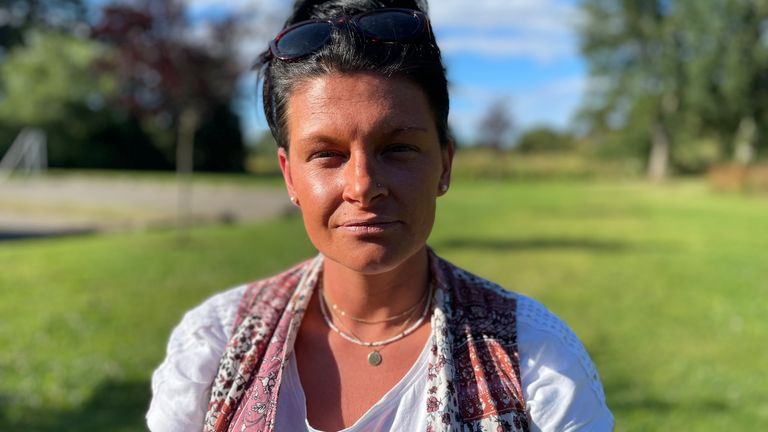 Image: When Cheryl Parker was addicted to codeine she was being prescribed 100 tablets every three days, and was in constant fear of overdose

Cheryl Parker, also from the Durham area, became addicted to codeine after complications giving birth. Soon she was being prescribed 100 tablets every three days. She was in constant fear of overdose, but was sick if she tried to withdraw.

She said: “God I used to be ill. Spewing, couldn’t walk, constantly on the toilet, mentally just totally drained. I used to have an inhaler down the side of my bed every night. I used to just be panicking. What would I do if I don’t wake up? My little girl’s there, what’s she going to do?'”

Justine and Cheryl are both housed by Positive Directions, which helps accommodate vulnerable people.

Beverly Crooks, one of its support workers, says there’s little help available for those with mental health and addiction problems.

She said: “For the last year there’s been a lot of suicides through drugs and people not getting help. People really depressed, can’t get any help from anywhere, getting told there’s no one that can come out and see them because there’s not enough staff.”

The director of Positive Directions, Gary Crooks, told Sky News: “It’s an absolutely huge problem and a time bomb that’s been simmering under the surface for quite some time now.”

“Being on the frontline, what we’re encountering is an explosion in prescribed drugs from the GPs, and certainly on the black market.

“A lot of people have been accessing drugs from the dark web, and buying prescription drugs that way, at a real big discount, and selling them on the streets.

“They are extremely addictive and quite often the problem is they’re prescribed by medical professionals and so the people who are taking the prescriptions don’t realise how addictive these substances are.”

Ewan Maule, lead pharmacist for the North East and North Cumbria, says there is a link between poverty, especially in declining industrial regions such as the North East, and chronic pain and this in turn leads to greater use of opioids in certain regions.

However, he says that medical understanding about the risk of opioids has evolved and NHS professionals need to take note.

He said: “The conversation is changing and we are starting to talk about non-drug treatments, non-medicines for treatment of chronic pain, because we know the harm that can be done by opioids certainly long-term, outweighs the benefits.

“We all need to re-educate ourselves. People like me, who were educated 20 years ago, need to change the way we think about things.”

Medical academics in the region agree and a programme is being launched in the North East to use GPs’ databases to contact people on high dose opioids offering help.

Professor Julia Newton, from the Newcastle Hospitals NHS Trust, said: “We need to take notice that we’re an outlier in this area and begin to look at why that might be.

“Primary care is overwhelmed at the moment, time is very precious in short GP consultations. And I think sometimes it might just be easier when a patient wants a tablet, for a GP to prescribe or to continue to prescribe a medication.”

Offered heroin at a rehab centre

While getting hooked is easy, finding help to get off is a struggle. Addicts told us that the main rehab centre in Durham, called County Durham Substance Misuse Service – Centre for Change, often has dealers outside and sometimes inside.

One recovering addict said it was a great place to “go for a hit” rather than rehab.

When Sky News paid a visit, a social worker with our team was offered heroin by a client coming out of the premises.

Humankind, which runs the centre, said that it takes any reports of drug use and dealing within its centres “extremely seriously” and it has “strong, well-communicated policies in place prohibiting these acts”.

It added: “Anyone found to be dealing, sharing or using drugs on a Humankind site will be challenged and reported to the police, and any claims of drug dealing are investigated thoroughly.”

When it comes to the government’s levelling-up agenda, clearly this is another area that needs attention. Communities that have seen industrial decline and rising poverty have also added addiction to their list of problems.

Former addict Justine says: “How are they going to break the cycle? There’s no jobs, no help, no future, no dreams.”

And it seems medication is no substitute for investment, jobs and services.

SHANGHAI – China’s censors were working on Monday to extinguish signs of rare, social media-driven protests that flared across major cities over the weekend calling for political freedoms and an end to Covid-19 lockdowns. Sunday saw people take to the streets in several major cities across China to call for ...

Getty Images Robert Saleh has had easier weeks. This is the life of an NFL head coach: Crisis management is the first thing you must master. Saleh didn’t score a touchdown, complete a pass or make a tackle in the Jets’ 31-10 win over the Bears on Sunday at ...

NetEase’s extremely popular Dead By Daylight adjacent Identity V is all set up to host its next big collaboration, this time with the popular survival horror game Project Zero II: Crimson Butterfly. This crossover includes new cosmetics to grab, new event-specific tasks, and more! Let’s clear up one thing ...

Unique Nicole/WireImage/Getty Images Cheryl Burke dedicated a touching message to all of her dance partners on Dancing with the Stars. The note comes as the pro dancer announced she was stepping down from the show after 26 seasons. “To all of my dance partners who each has played a ...


View more: Cheryl Burke Dedicates Touching Message To All Her ‘Dancing With The Stars’ Partners As She Steps Down As Pro

Thanksgiving weekend is one of the busiest times of the year for travel, with millions taking to the skies or roads to get home. Multiple travelers told NBC 5 things seemed to be busier this time around compared to last year. However, official travel numbers have yet to be ...

A man was clinging to life after he was shot in the head in Lower Manhattan on Sunday, police said. The 44-year-old victim standing on W. 17th St. near Ninth Ave. in Chelsea when gunfire erupted around 9:35 p.m., cops said. Police investigate a shooting on West 17th Street and ...

Jets must now ride Mike White in playoff push: ‘You just believe in him’