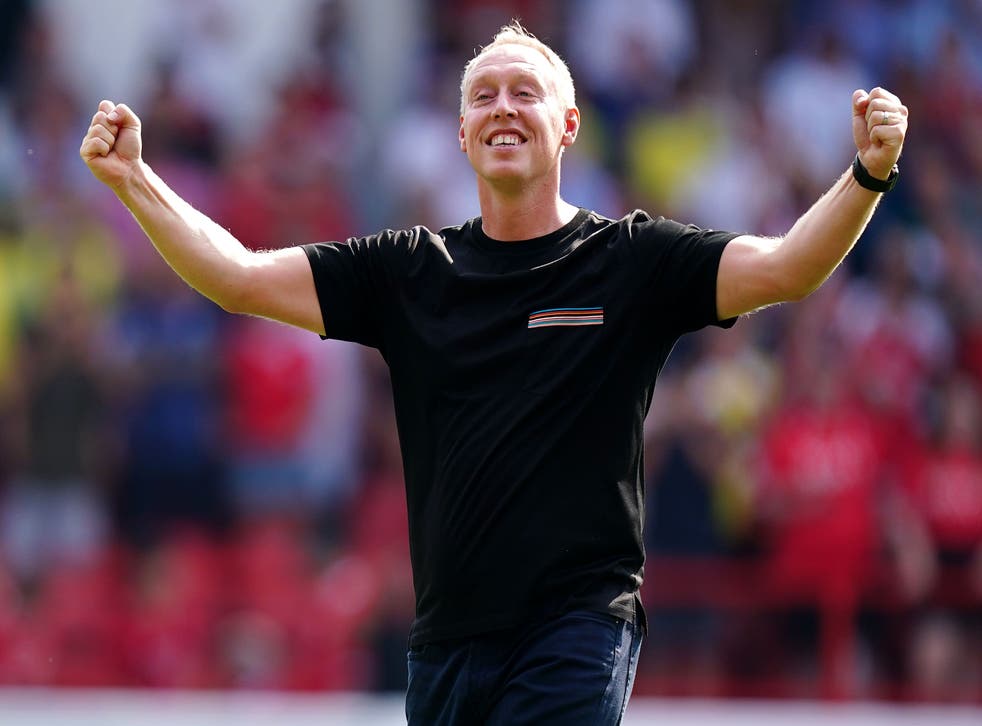 Nottingham Forest’s decision to hand Steve Cooper a new contract will help keep the club “united”, according to the supporters’ trust.

Cooper signed a new three-year deal on Friday, just days after he was reportedly set to get the sack following a poor start to the season on their return to the Premier League.

The Welshman has retained the overwhelming support of the fans during this period, though, and they have not been quick to forget his achievements in winning promotion last term, when he guided them from the bottom of the Sky Bet Championship in September to play-off glory at Wembley in May.

Paul Severn, a board member of the Nottingham Forest Supporters’ Trust, says retaining the popular boss is important for keeping the club together.

He told the PA news agency: “When you lose a game against your local rivals it is natural to worry about the future of the manager, but it is pretty clear the fans are 100 per cent behind him, so that is a big thing.

“It is a brutal league and there is going to be speculation, but I think this is the right decision and hopefully starting on Monday everyone can come together united and we can start to get some points on the board.

“It is important that it isn’t club versus fans and that everyone is on the same page.

“The important thing about the promotion season was how everyone was united – players, management, club, fans. Everyone was together and it is amazing what you can achieve.

“This decision goes some way to bringing that back together.

“When a popular manager goes it is very divisive, so it would be very difficult for anyone to come in and take over in that scenario.

“So in the end it is the right decision for footballing reasons, but also for the club to be united and moving together, rather than discord, which is never good.”

Cooper is regarded as one of the best young coaches in the game, having excelled with England Under-17s, Swansea and now Forest.

The likes of Rafael Benitez and Sean Dyche were touted as possible replacements had Cooper been shown the door, but Severn says he remains the best man for the job.

“It would be difficult for any manager to take a team that has come up and be doing that much better. It is a case of being careful of what you wish for,” Severn added.

“He is a very talented manager and I wouldn’t want to see him leave and do well somewhere else and for us to flounder without him. I think there would have been a lot of takers.

“Three managers have already gone in the Premier League. It is brutal, but there is no guarantee that someone like Benitez or Dyche would be able to turn it around and keep them up.

“They have gone down another route, which is a good thing, of trying to bring everyone together rather than a divisive approach of removing a manager who is very popular and talented and would be highly sought-after by rival clubs.”

ROB DRAPER: Gareth Southgate must make the right call and DROP Harry Kane against Wales... his ballooning ankle needs rest and England have no chance of World Cup glory without their captain in the knockout stages

EXCLUSIVE: Melissa Caddick's husband slams his 'sickening' and 'tasteless' portrayal in hit TV show Underbelly: 'They stole my name and made up a story'

Serena Williams pays emotional tribute to her friend and fashion designer Virgil Abloh a year after his death from cancer at 41: 'I still can't put into words the sorrow I feel'

CHRIS SUTTON'S THREE KEY CLASHES: Harry Kane can answer his critics up against Joe Rodon, while Harry Maguire must be ready for a foot race with Gareth Bale

Andrea Agnelli among entire board of directors stepping down at Juventus

'After Sarm vanished from her lover's luxury yacht, I texted him to ask where she was... but he'd blocked my number': In her first shattering interview, the mother of a British former air hostess who disappeared in the Caribbean pours out months of anguish

Candace Cameron Bure unfollowed her former costar Jodie Sweetin, who she first met back in 1986 when they were cast as sisters on ABC’s hit sitcom Full House. Despite more than three decades of friendship and recently starring in their Netflix’s spin-off of their hit series, the pair appear to be at odds ...

Video: White House REFUSES to condemn China's crackdown on COVID protesters chanting 'freedom' - as US embassy urges Americans to keep a TWO-WEEK supply of medications, water and food at home because of threats of strict lockdowns


View more: Video: White House REFUSES to condemn China's crackdown on COVID protesters chanting 'freedom' - as US embassy urges Americans to keep a TWO-WEEK supply of medications, water and food at home because of threats of strict lockdowns

Revealed: Westminster Hall's ancient floors were DAMAGED by 250,000 mourners who queued to see the Queen lying-in-state

Hundreds of thousands lined streets of London, waiting hours to pay respectsCarpet was glued to ground inside the palace as waves of people flooded inBut its 180-year-old Yorkstone flooring suffered damage, House of Lords says

Hearts and Rangers will step up their preparation for a return to Premiership action in December with behind-closed-doors friendlies against Swansea City. Hearts and Rangers to play English Championship side managed by ex-Ibrox defender in friendlies The Ibrox clubs first-team stars returned to training on Monday, while Robbie Neilson is ...


View more: Hearts and Rangers to play English Championship side managed by ex-Ibrox defender in friendlies

Video: 'I've got my eye on you!' Ekin-Su Culculoglu seethes after seeing pictures of boyfriend Davide Sanclimenti partying with girls as they jet to Italy on new show Homecomings


View more: Video: 'I've got my eye on you!' Ekin-Su Culculoglu seethes after seeing pictures of boyfriend Davide Sanclimenti partying with girls as they jet to Italy on new show Homecomings

Just days after a family filled Thanksgiving holiday, Alec Baldwin enjoyed some one-on-one time with his first child with wife Hilaria. The 64-year-old actor was seen on a stroll in New York City with nine-year-old daughter Carmen on Monday. Alec kept it casual in a navy blue Moncler puffer jacket ...

EXCLUSIVE: 'To see England back there is wonderful... I have always said I would gladly go back to Pakistan': Ex-Sri Lanka coach Paul Farbrace was hit by shrapnel in a deadly terrorist attack in Lahore in 2009, but he's delighted to see Tests return there

Billie Eilish, 20, gushes about her boyfriend Jesse Rutherford, 31, as she talks about new romance for the first time: 'I locked that motherf**ker down!'

Five cops are charged after handcuffed black man was left paralyzed from neck down when police van made sudden stop: Officers MOCKED him and accused him of faking injuries

Decide on a first-choice XV, fix the scrum struggles, shake-up midfield, pray for Lawes and re-engage the public: CHRIS FOY on how Eddie Jones can turn the doom into a new boom and transform England into prime World Cup contenders again

Video: White House DEFENDS deal to drill oil in Venezuela and rejects claims Biden is reducing production on American soil - less than a month after President said 'no more drilling'

Bombshell as two Aussies WIN their Supreme Court case over Covid fines - and it means as many as 45,000 penalties could be struck down

Video: 'We are keeping an eye' on Twitter, Karine Jean-Pierre says: White House confirms they are monitoring Elon Musk's takeover and rise in users after being pressed on whether it will be a source of misinformation

‘I pulled his ass’: Billie Eilish discusses how she ‘locked down’ boyfriend Jesse Rutherford

Holland, Ecuador and Senegal are all scrapping for two knockout spots heading into Group A's final matches… so, who will top the group and who would England rather face?

Kevin Spacey books first role since winning sexual battery lawsuit brought on by actor Anthony Rapp... five years after being digitally replaced by Christopher Plummer in All the Money in the World

Cannibal frat boy, 25, who randomly killed Florida couple and chewed the man's face off is NOT GUILTY by reason of insanity: He will be sent to mental hospital after murdering victims in their garage while believing he was 'chased by demon'

Coronation Street star Johnny Briggs' daughter, 53, and granddaughter, 34, are banned from Surrey after being accused of 'attacking two women for £20'

Netherlands vs Qatar World Cup lineup, starting 11 for Group A match at Qatar 2022

Couple 'must raise £500k' to save their baby girl

EXCLUSIVE: 'She sings lead and I do backup!' Mariah Carey's longtime manicurist reveals the two belt out '80s hits during the Christmas Queen's nail appointments

The young mother whose dying wish will make TV history: Facing terminal eye cancer, Toni gave permission for her body to be dissected in a ground-breaking documentary. Now her courage and generosity could benefit up to a million other patients

Pervert delivery man who posed as a taxi driver and raped a teenager, 19, he kidnapped on a night out in Liverpool is jailed for 9½ years

Video: Virginia State Trooper, 28, is shot dead by California cops after he murdered the mom and grandparents of a teenage girl he CATFISHED online: He drove cross-country to commit triple-homicide then burned down family's home and drove away with young girl

Do you like lesbian sex? Because if you do, I'm having a party next week: That's how Ghislaine Maxwell propositioned a teenage PETRONELLA WYATT, at the start of a long acquaintance which left her both mesmerised and disturbed

Video: Kaia Gerber stuns as she confronts mannequin of herself in Blade Runner-inspired Alexander McQueen campaign

Could Matt Hancock quit politics and pocket £2m? Former health secretary will net a fortune if he pursues TV career after stint on I'm A Celebrity, expert says

EXCLUSIVE: How wedding dressmaker who lost both legs and an arm reacted after gruesome farm mowing accident - as she undergoes gruelling surgery and faces 'very long' recovery

The day the Queen joked she looked just like Miss Piggy: RICHARD KAY recounts how, as Gyles Brandreth's new biography reveals, the late monarch's deliciously dry wit meant she could take a joke as well as make them with aplomb

PICTURE EXCLUSIVE: Strutting her stuff! Sasha Obama, 21, shows off her belly ring in a VERY cropped T-shirt and low-slung jeans as she takes a weekend stroll across USC campus

Former Sky Sports presenter Andy Gray says he considered ending his own life after his 2011 sacking over sexism scandal, as he and Richard Keys reveal all to Piers Morgan

'A goal like that was worthy of losing one's mind': Hilarious moment Brazilian fan is scolded by his wife for shirtless celebration at World Cup in Qatar after Richarlison scores with sensational bicycle kick

Border crisis could now put FLIGHTS in danger: Union says Air Marshals are being deployed to the border and warn American travelers are at more risk from terror attacks and dangerous passengers ahead of busy Christmas period

How I went from 'the tea girl' to Britain's fraud enforcer in chief: Outgoing SFO boss hails success of her all-female team