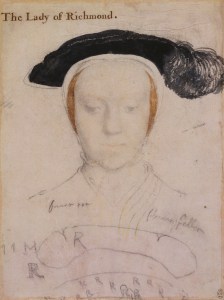 Henry FitzRoy was the illegitimate son of Henry VIII and Elizabeth Blount. Mary Howard was the second daughter of Thomas Howard, 3rd Duke of Norfolk and Anne Boleyn’s cousin. The marriage was an enormous coup for the Howard family.

There had been talk, when Henry VIII first began to consider divorcing Catherine of Aragon, to have FitzRoy marry his daughter Mary and thereby assure the future of the Tudor line. The Pope pushed for this solution as the perfect solution to Henry’s Great Matter, and offered to issue the required dispensation. It might even have worked, except that the King was in love with Anne Boleyn…

By November 1533, Anne Boleyn had become Queen of England. She had given birth to her daughter Elizabeth and a son was expected next. The marriage between the fifteen year old FitzRoy and the fourteen year old Mary Howard was a triumph for the Howard family, cementing their position as the premier English family. It also gave assurance that, one way or another, Howard blood would join in the royal line after Henry…

Unfortunately for the young couple, they were not allowed to consummate the marriage. The King was afraid that too much sexual activity had hastened his older brother Arthur’s death (remember – it was at the base of his annulment from Catherine that the two had consummated that marriage) and didn’t want to chance his own son. Thus, when FizRoy died of consumption in 1536 right after turning 17, Mary was not entitled to many of the lands she should have expected as the widow – because without the consummation, the marriage was not a true marriage (a trick Henry was to use again to rid himself of Anne of Cleves)(!).

But that is a story for later. For today, let us toast happiness to the newlyweds and to the still-triumphant Anne Boleyn….

If you like my posts, you’ll love my books! My Seymour Saga trilogy tells the gripping story of the short-lived dynasty that shaped the Tudor Era. Jane the Quene skews romantic, The Path to Somerset is pure Game of Thrones (without the dragons), and The Boy King is a noir coming-of-age. Get them now through Amazon, Barnes & Noble, Kobo, and Apple, or even your local independent bookstore! 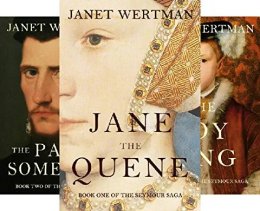 The cell in the Tower of London where Raleigh was imprisoned

(PS Already read them? Did you love them? Then please review them – even just a stars rating! It makes a huge difference in helping new readers find them and would mean the world to me!)